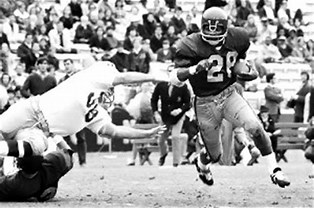 The Obvious: It figures that the 2019 season will be another season in which the USC running back is referred to as a tailback, but the reality is today’s Trojans tailbacks don’t consistently line up behind a quarterback who takes the snap from under center and has a lead fullback between the QB and the tailback. Today’s old O/NSO saying, “All running backs are not tailbacks, but all tailbacks are running backs.”

The Not So Obvious: To be honest about the USC tailback tradition, current USC head coach Clay Helton has basically abandoned any consistency for what was once the position crown jewel of college football, a running back lined up as a true tailback. Today, we have a first-year offensive coordinator Graham Harrell who may not know all that much about the I-formation, but he does know his version of the Air Raid offense. Oh, the USC “running backs” may get the ball more than expected in Harrell’s offense, but it probably won’t be out of the true I-formation with any consistency unless it’s inside the 10-yard line or short yardage situation. Do the Trojans even have a true fullback on the roster to clear the way for the tailback?

The Obvious: At this point in USC football history, Trojan fans probably really don’t care about the type of offense is employed but want one that actually works in both the first AND the second half of a game and produces wins.

The Not So Obvious: It’s all about winning, isn’t it? The 2019 offense won’t bring back memories of yesteryear when the Trojans had the most physical running attack in college football outside of Oklahoma and had the pure All-America tailbacks to prove it. Most USC fans of today are sick of hearing about physicality, but the fact remains when the Trojans had super I-formation tailbacks, they also had superior to relentless, NFL-bound offensive linemen that pounded opponents. Because of that success, recruiting was made much easier because blue-chip tailbacks out of high school wanted to run behind those NFL-bound offensive linemen, and those NFL-bound offensive linemen wanted to block for future All-America tailbacks that were also headed to “The League.” One complimented the other and it was a beautiful thing.

The Obvious: Many of today’s young USC fans really don’t know the what a true I-formation tailback looks like in the traditional sense, but they have been told by grandpa about the history regarding the tailback tradition or better known then as Tailback U.

The Not So Obvious: So, for those that would like a quick refresher course regarding what a real USC tailback looks like and its history, let’s start with this introductory course: https://www.youtube.com/watch?v=vy4jYC3Z8MU

The Obvious: Of course, in terms of a true tailback, it really started in the modern era with Mike Garrett (1963-65), who because the blueprint for all future tailbacks to follow.

The Not So Obvious: They didn’t call him “Iron Mike” for nothing. He could carry and carry a football and never seemed to get tired. He became the prototype tailback in head coach John McKay’s system. Here’s a short video and bio of when Iron Mike played his high school ball for Los Angeles Roosevelt High School and added his mark to one of Southern California’s biggest and greatest prep rivalries: Roosevelt vs Garfield or better known as the East L.A. Classic: https://www.youtube.com/watch?v=3CttRGMOcAI

The Obvious: The O/NSO remains convinced that the greatest USC tailback is O.J. Simpson.(1967-68). Despite trailing behind Reggie Bush and Marcus Allen in the latest WeAreSC voting poll for tailbacks (Have you voted yet?), the O/NSO – having seen them all play in person, Simpson was the best. You don’t have to like him, but in terms of a USC tailback, we think he was the above the others.

The Not So Obvious: Clearly, these video pieces below provide the evidence of Simpson’s greatness as the ultimate USC tailback. You only need to see these two long touchdown runs to capture the essence of “The Juice” carrying the pigskin – against UCLA in 1967 and Ohio State in the 1969 Rose Bowl game. It says it all:

The Obvious: When O.J. Simpson left USC after an historic career, he was replaced by a JUCO tailback from East Los Angeles College named Clarence Davis (1969-70).

The Not So Obvious: Many young USC fans probably have never heard of the great Clarence Davis, who was asked to fill the shoes of what many believed at the time was the best college football runner ever – O.J. Simpson. While he may not have the legendary status of the other tailbacks under John McKay, he would have been a star in any other era. In fact, Clarence still finished his Trojan career as an All-American, and that’s sometimes forgotten. Here’s some film on Clarence as the Trojans hosted Notre Dame in 1970: https://www.youtube.com/watch?v=pYHoBkIkJOg

The Obvious: Tailback Anthony Davis (1972-74) had a running style all his own, sort of a guy riding a bicycle with jitterbug moves.

The Not So Obvious: Davis came to USC as a quarterback out of San Fernando High but was moved to tailback and the rest was history. While many remember Anthony Davis for his great kickoff returns against Notre Dame, he probably should have won a Heisman Trophy during his playing days as a running back in the early 1970s. Why? Just take a look: https://www.youtube.com/watch?v=-Yf0yfwuKvI

The Obvious: The Trojans had what seemed like an endless assembly line of All-America tailbacks under John McKay and then under John Robinson in the first Robinson era.

The Not So Obvious: And of all the USC tailbacks, none ran with more brute power and violence than Ricky Bell (1973-76) who came to Troy as a linebacker from Los Angeles Fremont HS and was eventually converted from a fullback to a tailback. You want the proverbial bull in a China closet? Watch Ricky run: https://www.youtube.com/watch?v=d3P3h6V9ESM

The Obvious: You may not know this, but the all-time favorite USC tailback of late WeAreSC publisher Garry Paskwietz was Charles White (1976-79).

The Not So Obvious: No Trojans tailback during those times was any tougher than Charles White. He was all man. Come watch No. 12 in a highlight package from the 1980 Rose Bowl game. This game says it all: https://www.youtube.com/watch?v=kaqw_8ZThdo

The Obvious: You really can’t compare the tailbacks that ran the pigskin for the Trojans during that golden era of John McKay and then John Robinson because the mental and physical makeup of those future Heisman Trophy winners and All-Americans were cut from a different cloth than today’s USC running backs.

The Not So Obvious: Marcus Allen (1978-1981) is the tailback that most past historians look at behind O.J. Simpson although you could get a winning argument for any of the traditional USC tailbacks. Need to be reminded of the greatness of Marcus? Here is No. 33 against Oklahoma in a titanic national game back in 1981: https://www.youtube.com/watch?v=eQz7LQ6gB2k

The Obvious: One could argue successfully that Reggie Bush (2003-05) and for that matter LenDale White (2003-05) were the last of the consistent true USC tailbacks, and let’s not forget that head coach Pete Carroll did use a fullback in a true I-formation or at the very least placed the fullback slightly offset to the left or right of the quarterback.

The Not So Obvious: From his own playing days as a safety at the University of Pacific, Carroll understood the tradition of Tailback U. It wasn’t lost on Carroll what a USC tailback looked like during his own playing time at UOP. So, when Carroll became Trojans’ head coach, he made Tailback U. a continued priority as demonstrated by his offensive formations and philosophy. You could say that Carroll’s tailbacks were really the last of the USC tailbacks as we know them. Regardless of what you may think of Reggie Bush, he ranks with O.J. Simpson in terms of his explosiveness: https://www.youtube.com/watch?v=RQauccrEEuQ and

The Obvious: So, there you have it, a reminder of the glory of what was once Tailback U. with running backs that were actually tailbacks that lined up behind the quarterback with normally a tradition fullback in front of them with the quarterback taking the snap directly under center.

The Not So Obvious: Could the real Tailback U. ever make a return? It’s possible, but you would have to have a coach that understands the philosophy of a true USC tailback and empowers that tailback with a dominant offense line. As they say, “What goes around comes around.” Well, we’ll see about that.