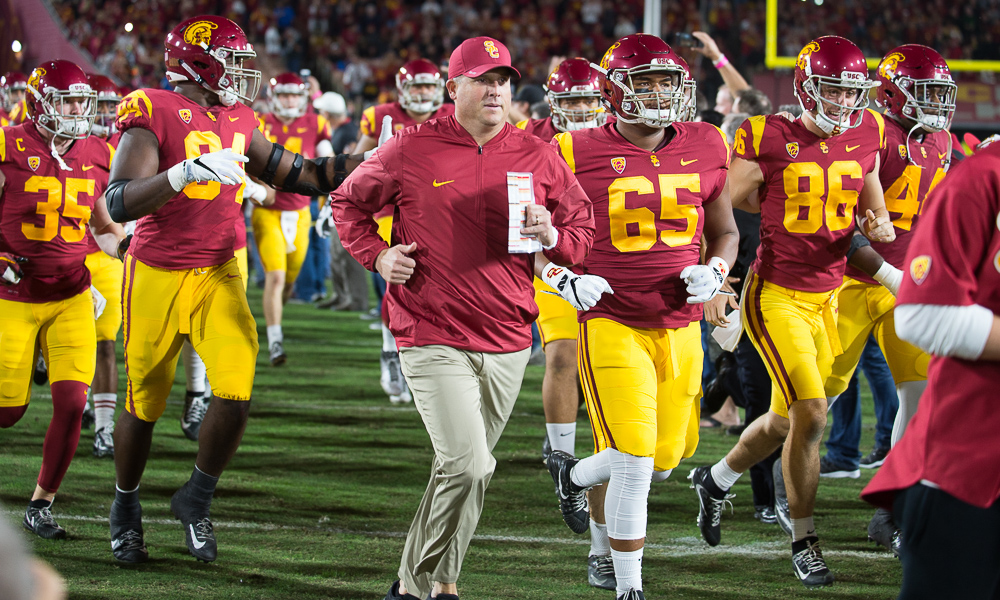 The Not So Obvious: All eyes will be on J.T. Daniels and how he performs in his introduction to the college football landscape. Can what he accomplished in training camp translate into an actual game? Can he withstand the scrutiny and expectations that accompany being the quarterback at storied USC? What happens when he gets smacked around or violently sacked? Will there be any initial Coliseum stage fright for the former Mater Dei QB legend? Aside from the extreme Daniels curiosity, Trojan fans in attendance will also get their first look at the controversial new Coliseum “Scholarship Tower” and all the new renovation. Oh, and BTW, the 2018 USC team actually has a game against a heavy underdog UNLV Rebels team that will try and avoid being an exploding tomato can.

The Obvious: The Trojans opened a 26-point favorite to defeat UNLV.

The Not So Obvious: The Trojans and UNLV have met only once before, a 35-21 USC victory in the Coliseum in 1997. It was former Trojans’ coach John Robinson’s 100th collegiate victory. The Trojans trailed 21014 early in the fourth quarter before scoring three unanswered touchdowns. The Men of Troy are currently riding a 16-game Coliseum winning streak. The Trojans are also 30-1-1 against Mountain West Conference teams and 96-19-7 in home openers.

The Obvious: Saturday’s Trojans’ radio broadcast from the Coliseum will air live (1:00 p.m. PT) on ESPNLA 710 AM with Pete Arbogast (play by play), John Jackson (analyst) and Jordan Moore (sideline).

The Not So Obvious: The Trojans radio game broadcast will be preceded by a four-hour pregame show beginning at 9 a.m. and featuring Arbogast, Jackson, Moore, Shaun Cody, Chris Fisher, Andy Kamenetsky, Chris Hale, Nick Alfano, and WeAreSC publisher Garry Paskwietz. Following the game, there will be a two-hour post-game show.

The Obvious: Traditionally, Las Vegas has a large USC following when not rooting for the Rebels.

The Not So Obvious: The UNLV broadcast can be heard on flagship station ESPN Las Vegas (1100 AM/100.9 FM) with Russ Langer (play-by-play), Caleb Herring (analyst), and Steve Cofield (sidelines).

The Obvious: Saturday’s Coliseum weather forecast calls for sunny with a high of 83 and a low of 68 degrees, 61 percent humidity, and 10 percent precipitation.

The Not So Obvious: The real weather report is whether the Trojans are ready to be led by a true freshman quarterback, and whether the Men of Troy will look past UNLV to the following week’s huge Pac-12 opener at Stanford.

Offensively, we’ll see whether the Trojans, led by an inexperienced freshman quarterback, can score points at will against a very suspect UNLV defense. We should find out early whether this offensive line, which should have a major talent advantage, can physically manhandle the smallish UNLV D-line, and it will be intriguing whether Trojan OC Tee Martin can quickly solve new UNLV defensive coordinator Tim Skipper’s mystery defense. We’ll also find out whether senior center Toa Lobendahn (pectoral strain) plays and his status is listed as “questionable.” If not, the Trojans will start with a no experience redshirt freshman center named Brett Neilon and a no experience quarterback in Daniels, which could be a real trivia question: When was the last time the Trojans started a season with a no experienced freshman center and quarterback?

Defensively, we’ll see whether the Trojans’ defense lives up to all its preseason hype, especially against a UNLV offense that revolves around the running game. Let’s find out whether the Trojans’ high-touted defense can contain the UNLV rushing game, which is led by big and slippery dual-threat QB Armani Rogers (6-5, 225), 2017 Mountain West freshman of the year, and impressive senior running back Lexington Thomas (5-9, 170). A big USC question on Saturday is whether senior outside linebacker Porter Gustin will start, although he is cleared and expected to play, and we’ll see whether newly named starting redshirt Trojans freshman corner Greg Johnson can uphold his end of the bargain.  Expected sophomore starting safety Bubba Bolden will not play on Saturday due to undisclosed reasons, and there is no timetable for his return. Redshirt freshman Isaiah Pola-Mao will start in place of Bolden at strong safety, and this will be his first college game. We’ll see whether this late change has an effect in the secondary.

The Obvious: The 2017 Trojans’ offense averaged 34.54 points per game while the UNLV defense allowed 31.8 points per outing.

The Obvious: Clay Helton is in his third full season as the Trojans’ head coach.

The Not So Obvious: Beginning his third season as Trojans’ head coach, the previous two Helton seasons have included a thrilling Rose Bowl victory and a Pac-12 title, respectively. It is well chronicled that in their third seasons, John McKay, John Robinson, and Pete Carroll all won national championships. While most believe that the 2019 season will be the most logical season for a title run, USC is USC and trying to get to the CFP is the expectation. After all, last season Georgia got to the title game with a true freshman quarterback in Jake Fromm. Can Helton’s freshman QB do the same?

The Not So Obvious: The O/NSO asked J.T. how he would handle and control the first-game jitters, nerves of walking down the legendary Coliseum tunnel, and getting his first series out of the way. J.T. replied, “The college atmosphere is obviously a lot bigger than high school. Playing at a competitive high school (Mater Dei) and playing football all my life, at the end of the day football is just football. It’s the same sport, you’re still doing the same things at a different level, a different stadium. Just breath and stay calm, get used to it, get in the flow of it, and it won’t be that big of a deal.”

The Obvious: Although J.T. Daniels will get the frontline of attention, the Trojans offensive line will probably receive the next most scrutiny.

The Not So Obvious: Asked to assess the Trojans’ O-line on the week of the season opener, offensive line coach Neil Callaway said, “You know we’ve kind of had some people banged up the last four or five days and four this week. It’s good to get them all back and we’ve got a lot of work to do. We’re anxious to play, but at the same time we’re only as good as our weakest link. We all have to play together, so I am anxious to go see them go play and see if we can play in sink and play as one.”

(On the O-line getting physically tougher) “We’re getting there, nah, we can do better and need to do better. Hopefully, we’ll get there, but we’ve still got a ways to go.”

(Training camp surprises) “I don’t know if anybody surprised me, but I think the two young centers (Brett Neilon and Justin Dedich) did a nice job and (guard) Alijah Vera-Tucker did a nice job. I think that (guard) Jacob Daniels came on and made some progress, so those would be the young ones that I’ve talked about. I want to see where we’re at. I am ready to roll.”

The Obvious: Nobody knows the mental state of the Trojans like a team captain.

The Obvious: The Trojans’ defense might be seeing the type of offense they’ll see in the Pac-12.

The Obvious: Reflecting on the UNLV offense, Cameron Smith says, “They’re like a Utah and they like to run the ball. They’re pretty well rounded and have great players on offense, and we’re looking forward to a great challenge.”

The Not So Obvious: UNLV has 41 players from California.

The Obvious: John Robinson is the Trojans’ former Hall of Fame football coach.

The Obvious: And finally, during Coliseum home Trojans football games, there is time taken before kickoff and during timeouts in the action to make special presentations and recognitions.

The Not So Obvious: Among the acknowledgments and events during Saturday’s season opener will be Joint Forces Day and Heritage Day (welcoming back former Trojan student-athletes), a moment of silence for late Trojans athlete, coach, administrator Willie Brown, a pre-game flyover, and Trojans coaches will wear American Football Coaches Association patches.