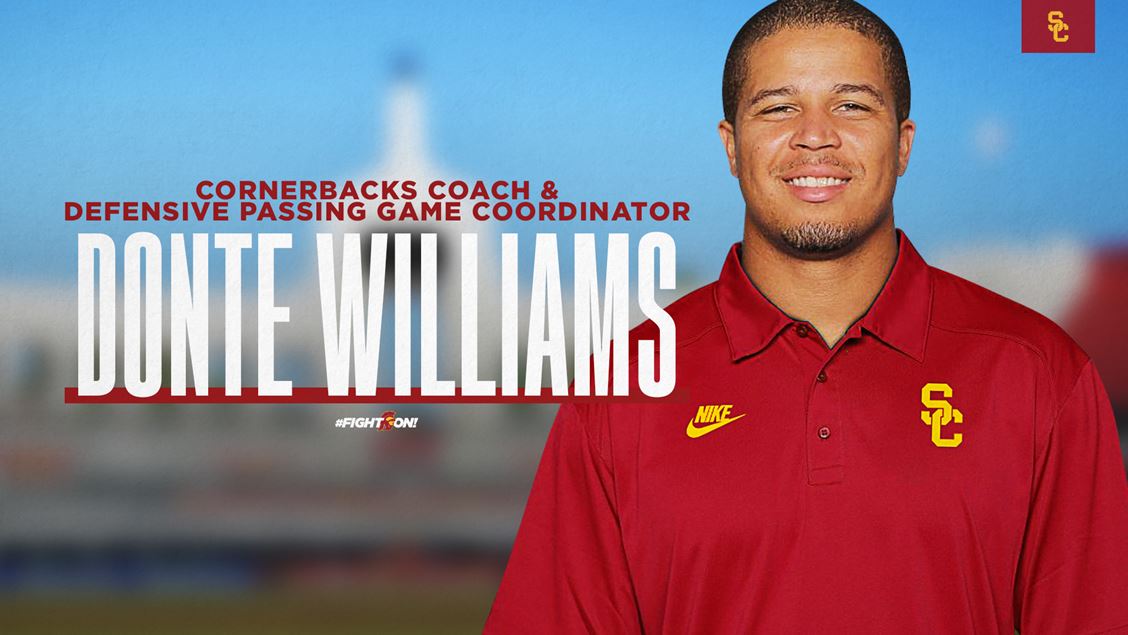 The Not So Obvious: Say what you want about whoever is making the hiring calls, athletic director Mike Bohn or head coach Clay Helton, but give credit where credit is due with the acquisition of the highly respected, recruiting demon Williams and the up-and-coming So’oto. As was to be expected, Oregon coach Mario Cristobal didn’t want to lose his ace recruiter in Williams and according to those in the know, they say the Ducks were prepared to offer more money to keep their prized asset in Eugene. However, for Williams, it appears that family considerations, an ailing father, played a major part in his decision to return to L.A.

The Obvious: It has been reported that Oregon tried to retain Donte Williams by increasing his salary.

The Not So Obvious: According to the Oregonian, “Williams earned $400,000 in base salary plus $55,000 in performance bonuses this year (with the Ducks) and was due $450,000 next year. He does not owe UO a buyout because he did so after Jan. 31, 2020.” This may have been a case where Trojans AD Mike Bohn opened his cardinal and gold pocketbook and gave Williams an offer he couldn’t or didn’t want to refuse. Reports are that Williams doubled his annual salary by signing on with the Trojans. This is a big deal as it relates to USC recruiting going forward, and there may be obvious signs that the Williams acquisition is already in full stride. Harbor City (Calif.) Narbonne super defensive back Anthony Beavers Jr., an Oregon verbal commit for the Class of 2021 and being recruited at the time by Williams, has reopened up his recruiting and with Williams now on the USC coaching staff…hmmm.

The Obvious: It should be sooner rather than later that Vic So’oto is named the new Trojans’ D-line coach.

The Not So Obvious: Finally, here’s another rumor that came to fruition, Vic So’oto from Virginia to USC. It didn’t hurt, like Donte Williams, that he, too, is a native Southern Californian. Vic is from Carlsbad, California, where he played at prep ball at Carlsbad High. He was an All-CIF San Diego selection for the Lancers, who play in the competitive Avocado League. For those that didn’t know, So’oto is a second cousin of NFL Hall of Fame linebacker and USC linebacking legend Junior Seau.

The Obvious: The head coach at the University of Virginia is Bronco Mendenhall, considered one of the top defensive minds in the country.

The Not So Obvious: It figures that the Trojans are getting a good one in new defensive line selection Vic So’oto because of Mendenhall’s defensive reputation for making good hires. It didn’t hurt that Bronco and Vic go back to the days when the two were together at BYU.

The Obvious: In spite of the hiring of Donte Williams and Vic So’oto, head coach Clay Helton remains on the hot seat.

The Not So Obvious: One would have to think that Williams and So’oto didn’t come to Troy with just one-year contracts in hand. They had to be given at least a substantial pay raise, but more importantly some assurance they weren’t going to potentially end up like former USC coaches Greg Burns and Chad Kauha’aha’a, losing their jobs after one season. It figures that all the new Trojans coaches walking in had to sign contracts that gave them at least a two-year window of security.

The Obvious: Donte Williams was a real thorn in the backside of the Trojans last recruiting class.

The Not So Obvious: Yes, it was Williams who was a major player in landing the Ducks consensus prep All-America linebacker Justin Flowe out of local Upland High. It could be said that Flowe heading to Oregon was a major knife in the chest of the Trojans recruiting efforts, a player that should never be heading to Eugene under normal circumstances. Of course, these are not normal times under the Helton administration, and it has translated into recruiting.

The Obvious: Say what you will, but it appears that the Trojans 2020 coaching staff has rounded into place quite nicely.

The Not So Obvious: Yeah, many of you can’t believe the O/NSO is presenting a positive picture in terms of coaching. Helton appears to have either surrounded himself or has been assigned assistants that should give the Men of Troy a definite preseason forecast as the favorite to win the Pac-12 South and perhaps even a Pac-12 Championship.

The Obvious: Former Trojans assistant Johnny Nansen is expected to be hired by UCLA as the Bruins new defensive line coach.

The Not So Obvious: FWIW,insiders are saying that Nansen didn’t want to leave the Trojans family and was willing to take another position even if it meant not being part of the on-field coaching staff. However, insiders are also saying that the Trojans wanted to go in another direction and so it is what it is. Johnny, who is a native Angelino who attended Long Beach Jordan HS, made his name at Troy with some excellent recruiting efforts. FYI, if Nansen is hired as the UCLA defensive line coach, it should be noted that Johnny has never coached a defensive or offensive line in his coaching career.

The Obvious: Los Angeles is a highly competitive sports town that demands superstar headliners for its athletic teams.

The Not So Obvious: With the Dodgers acquiring superstar outfielder Mookie Betts in the trade with Boston, the Lakers past inking of LeBron James and the Clippers following suit with forward Kawhi Leonard, and the Rams with All-Pro D-lineman Aaron McDonald, Trojans football also needs to have a marquee name. If he can improve on his outstanding freshman season, sophomore-to-be quarterback Kedon Slovis should slip in nicely to one of the local sports billboards.

The Obvious: Rumors continue to swirl over the possibility of former Trojans’ linebacker legend Chris Claiborne being added to Clay Helton’s staff as a grad assistant.

The Not So Obvious: Mum has been the word regarding Claiborne, but the thought of him going to ASU to join former Trojan Chris Hawkins with the Sun Devils should set off warning bells to Clay Helton to bring No. 55 back to Howard Jones/Brian Kennedy Fields. Would Claiborne accept a defensive grad position on Helton’s staff? Does the old O/NSO have to even address that question? Okay, the answer is a resounding “yes.” Claiborne’s addition to Helton’s staff, however, may rest with an NCAA rule that deals with former high school coaches having recruitable players at their school within a two-year cycle. Claiborne does appear to fit within the NCAA two-year rule due to his recent head coaching affiliation with Calabasas (Calif.) High, and the Trojans recruiting his school.

The Obvious: Changing assistant coaches in the Pac-12 and college football in general is always part of the landscape.

The Obvious: After just one season at Colorado, Buffaloes head coach Mel Tucker has left for Michigan State.

The Not So Obvious: You talk about the ultimate betrayal coming less than two weeks after national signing day, Tucker’s decision affects so many in so many different ways, especially with spring ball right around the corner. You can only imagine the shock to those incoming freshmen or those that enrolled early. And you have to wonder how many of Tucker’s Colorado staff will eventually join him in East Lansing? What a mess in Boulder. Does that mean that – again – Trojans’ OC Graham Harrell will be getting a call? Just kidding…I think. As of right now, former Colorado standout Darrin Chiaverini has been named interim head coach.

The Obvious: And finally, Chris Steele was once a highly recruited defensive back from Bellflower (Calif.) St. John Bosco who went to Florida and then finally settled on returning to play with the Trojans last season.

The Not So Obvious: Upon learning about the hiring of defensive backs coach Donte Williams, Steele pulled no punches by twitting out “Christmas came early.”