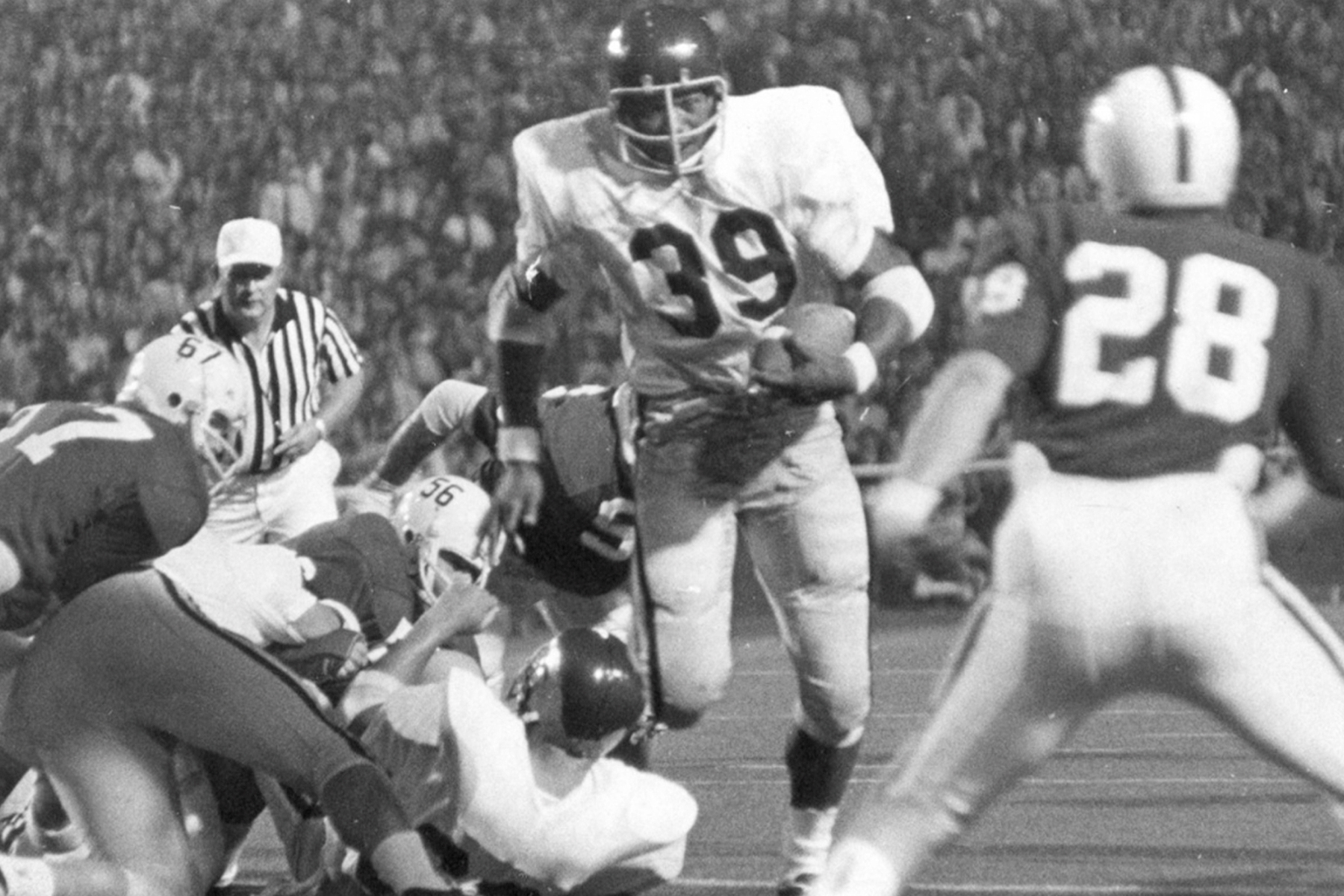 The Obvious: If the circumstances allow, the USC Trojans and the Alabama Crimson Tide, two legendary football programs, will open their 2020 seasons on Sept. 5 in Arlington, Texas, in the Advocare Classic, which will be played in AT&T Stadium.

The Not So Obvious: If the Trojans and the Crimson Tide so play in September, it will be their ninth meeting with the storied Tide holding a commanding 6-2-0 record. The last time the two teams played was in 2016, and the men from Tuscaloosa more than dominated the Trojans, 52-6. It was also Clay Helton’s first game as USC’s permanent head coach.

The Obvious: One of college football’s new era traditions has been the pomp and circumstance buildup to the home team taking the field.

The Not So Obvious: The Trojans and Alabama have their pregame entrance to the field as part of the excitement before kickoff. Take a look below how they do it in Tuscaloosa and in Los Angeles.

The Obvious: USC and Alabama first began their relatively short but super intense rivalry series in the 1938 season opener in the Coliseum and 70,000 fans were in attendance to watch it.

The Not So Obvious: In that first meeting of the Men of Troy and the Crimson Tide, the Trojans head coach was the legendary head coach Howard Jones while the Tide was directed by head coach Frank Thomas. After the Tide held a 13–0 lead through the third quarter, Alabama’s Hal Hughes intercepted Trojans Oliver Day’s pass and returned it 25-yards for an Alabama touchdown to make the score 19–0. Later in the fourth quarter, the Trojans scored their only points of the game. A one-yard Day touchdown run was set up after Trojans Al Krueger recovered a Charley Boswell fumbled punt at the Alabama one-yard line as the Crimson Tide held on for a 19-7 triumph. How big was the Alabama win for the West Coast power Trojans? Over 6,000 fans greeted the Alabama team at the Alabama Great Southern Railroad station in downtown Tuscaloosa upon their arrival the following Tuesday to celebrate their victory.

The Not So Obvious: World War ll had ended and it was common for news and sports to be packaged into a newsreel for movie theatres. So, to tell you the story on the game and the preceding Rose Bowl Parade, take a look at the newsreel highlights below.

The Obvious: Heading into the 1970 season, the Trojans were a well-integrated team while Alabama had been basically a segregated team as was the rest of the Southeastern Conference. Yet, it was decided by Trojan’ head coach John McKay and Alabama’s legendary head coach Paul “Bear” Bryant to schedule a game in Legion Field in Birmingham, Alabama. The Tide also held a 2-0 mark against the Trojans with wins in 1938 and in the 1946 Rose Bowl.

The Not So Obvious: There was, needless to say, a tremendous change in college football when the Trojan played Alabama in the segregated South. The outcome was way beyond the Trojans 42-21 crushing of Bryant’s southerners. Trojans’ fullback Sam “Bam” Cunningham (12 carries, 135 yards and two touchdowns/photo above story headline) became a legend for his rushing performance, but the thanks to the Cardinal and Gold whipping Alabama, the Southeastern Conference was never the same nor was college football. Below are two different feature stories that reflect upon that 1970’s night in Birmingham.

The Obvious: In 1971, Alabama came out to Los Angeles for a rematch with the Trojans, and the game between the two giants of college football was played before 67,781 in the Coliseum.

The Not So Obvious: If the Trojans thought it would be another rout against Bear Bryant’s Tide in L.A., there was a surprise forthcoming. Unbeknownst to Trojans head coach John McKay or anybody else for that matter, The Bear changed his offense completely, and The Tide rolled in running the Wishbone T triple option. Needless to say, the Trojans’ defense was caught really unprepared, and the Men of Troy went down to defeat 17-10.

The Obvious: In 1977, Alabama returned to the Coliseum, and the Trojans were hoping not to have a two-game losing streak against The Tide in the Grand Old Lady. The turnout of 63,140 saw another slugfest with the Trojans coached by John Robinson and The Tide was again coached by Bear Bryant, who was now in his 20th season.

The Not So Obvious: Per Associated Press, “Tony Nathan, an Alabama halfback, ran for two touchdowns in the fourth quarter today, and the Crimson Tide withstood a furious rally by the University of Southern California in the final seven minutes to post a 21‐20 college football upset.

“Alabama had taken a 21‐6 lead over U.S.C. early in the final period of the nationally televised game, but the Trojans’ quarterback, Rob Hertel, passed his team back in the waning moments.

“Hertel hit Calvin Sweeney with a 10-yard touchdown pass with 6 minutes 46 seconds remaining, then passed to Mosi Tatupu for a 2‐point conversion that made the score 21‐14.

“Then, starting at his 21‐yard line, Hertel took the Trojans to Alabama’s 1, where Lynn Cain, a fullback, swept around end for a score with 39 seconds left. But this time U.S.C.’s 2‐point‐conversion attempt failed, as Barry Krauss intercepted Hertel’s desperate pass.” Alabama now led the series 5-1.

The Obvious: In 1978, the Trojans again took a plane trip to Alabama, and the national championship was in the works. Before 77,313 in Birmingham, the Trojans were on a mission and their roster was filled with future NFL players.

The Not So Obvious: Alabama came into the game No.1 in the country.For many in this game, it was the Charles White (199 yards rushing including a 40-yard TD run) show as the Trojans’ tailback really hammered the Crimson Tide behind an awesome offensive line full of NFL draft picks. USC quarterback Paul McDonald threw two TD passes to Kevin Williams. The Trojans’ offense piled up 417 yards. There was no question after this dominating 24-14 win, the Trojans were as good or better than anybody in the country. In one of the great injustices in college football history, the Trojans were forced to have a split national championship with Alabama at the end of the season even though the two had met in late September. The Trojans were penalized for having tied Stanford 21-21 during the conference season.

The Obvious: In 1985, the Trojans found themselves playing Alabama in Hawaii’s Aloha Bowl.

The Not So Obvious: In a first half dominated by both defenses, both the Crimson Tide and the Trojans traded field goals, which resulted in a 3–3 tie at the half. Alabama placekicker Van Tiffin connected on a 48-yard field goal in the first half for Alabama, and the Trojan’s placekicker Don Shafer hit a 24-yard shot in the second quarter. The Tide’s Craig Turner scored the first touchdown of the game on a 1-yard run to complete a 10-play, 58-yard drive in the third quarter. The Crimson Tide closed out the game with a pair of fourth-quarter touchdowns. The first came on a 24-yard pass from QB Mike Shula to Clay Whitehurst and the second on a 14-yard Al Bell run. For their efforts, running back Gene Jelks and linebacker Cornelius Bennett were named the game’s co-MVPs. It was a tough trip to the Islands for the Trojans.

The Obvious: The last meeting between USC and Alabama took place in 2016 in the Cotton Bowl, and most Trojans fans would like to forget it even took place as The Tide crushed the Trojans 52-6 in Clay Helton’s first full season as the USC head coach.

The Not So Obvious: The best part of the game was when the final play had been run. For USC fans, it was a humiliating experience, but the leadup to the game was exciting. The game proved how far back the Trojans had gone in their program when meeting the top program in the country under head coach Nick Saban. For those that would still like to review the autopsy of the game, you can watch the “highlights” of the Cotton Bowl below.

The Obvious: And finally, will there be a ninth meeting between USC and Alabama this fall? Certainly the coronavirus situation will have the final say?

The Not So Obvious: With Alabama holding a commanding lead in the series (6-2-0), the Trojans would like nothing better than to buck all the odds and upset The Tide in the fall. However, whether the Trojans are equipped to do it remains a mystery as does the future of the 2020 season.