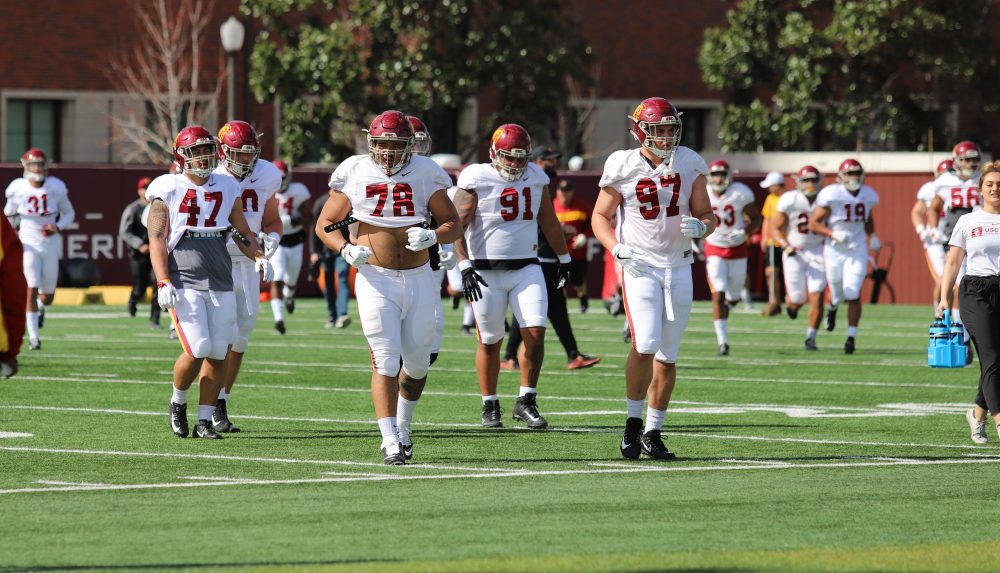 The Obvious: Each USC football season, you can never get enough inside information regarding the men wearing the cardinal and gold and items on the historical periphery.

The Not So Obvious: Information comes in many forms, and one of the bigger eyebrow raisers is the enchanting word – tidbits. So, for your enjoyment and with just one week remaining until training camp, here are some interesting “tidbits” regarding the 2019 Trojans and those affiliated items that relate to USC football.

The Obvious: The Trojans are coming off a 5-7 season and no bowl game.

The Not So Obvious: Losing seasons don’t happen often at Troy (only 13 times in the modern era), but when they do the Trojans have a history of answering with a winning season the following year. For instance, the last four times the Men of Troy were coming off a losing season (1961-83-91-2000), they played in a bowl the following year, including winning a pair of Rose Bowls and a national championship.

The Obvious: Every USC team has an oldest and youngest player on its roster.

The Obvious: It is not unusual for athletes to take a dance class to improve their mobility.

The Not So Obvious: Junior WR Tyler Vaughns credits a ballet class he took in high school (Bishop Amat HS) with helping him with his pass catching ability.

The Obvious: It is not unusual for USC football players to have been multi-sport athletes in high school.

The Not So Obvious: However, it is unusual when those athletes continue to be multi-sports athletes in college. It should be noted that true freshmen WR Drake London (basketball), WR John Jackson III (baseball) and TB Kenan Christon (track) might join USC teams in those sports once football season concludes.

The Obvious: Having a family member or relative play in a Super Bowl is quite an honor.

The Obvious: Redshirt freshman punter Ben Griffiths is a 27-year-old who played professionally for eight years in Australian Rules Football.

The Not So Obvious: Ben then trained at an Australian kicking academy to prepare for the transition to American football, enrolling at USC this past spring.

The Obvious: Each season seems to bring more and more players who have already earned their bachelor’s degree.

The Obvious: As has been a growing trend in college football, more and more seniors in high school are foregoing their spring semester to enroll early in college in order to participate in spring practice.

The Obvious: One of the real tidbits on every team is who is the fastest player on the roster?

The Obvious: One of the relatively new avenues of getting an athlete to eventually enter a college is “blueshirting,” which is a one-time NCAA rule that allows a non-recruited student-athlete to receive athletic financial aid after beginning practice and have that student-athlete count towards the next year’s signing class if the school had reached its NCAA-maximum aid limit for the current year.

The Obvious: One of the icons of USC athletics is the Trojans Marching Band.

The Not So Obvious: India Anderson, a junior music (tuba performance) major from New Jersey, is serving as the first-ever female drum major of the Trojan Marching Band in 2019-20. Just the fourth woman to try out for USC’s drum major since the TMC was established in 1880, she was elected by a vote of her fellow bandmates.

The Obvious: The title of longest living USC football player is certainly a rather large tidbit.

The Not So Obvious: Currently 96 years old, former USC quarterback Jim Hardy (1942- 43-44) is believed to be USC’s oldest living football player (and oldest living L.A. Ram). Hardy, the MVP of the 1945 Rose Bowl (this is the 75th anniversary of that season), played seven seasons in the NFL, then later was the general manager of the Coliseum. Jim currently resides in the Palm Springs area.

The Obvious: A majority of colleges and universities put the last names of their players on the back of their jerseys.

The Not So Obvious: USC is the only FBS school never to have had surnames on the back of its jerseys.

The Obvious: Many athletes get into a specific sport and position based upon some event that took place in their youth.

The Not So Obvious: Sophomore placekicker Alex Stadthaus began kicking after winning a halftime fan field goal kicking contest as a high school sophomore (he connected on a 60-yarder).

The Obvious: The renovated Coliseum has reduced its capacity to 77,000.

The Not So Obvious: Troy’s 617 games played in the Coliseum (including six wins vacated by NCAA penalty) is the second most that any school has played in its home stadium, behind Georgia Tech’s 694 in Bobby Dodd Stadium.

The Obvious: Alaska, the 49th state, was admitted as part of the United States in 1959.

The Not So Obvious: DL Brandon Pili is USC’s first football letterman from Alaska.

The Obvious: Sophomore Brett Neilon is the favorite to be the Trojans’ starting center when the Men of Troy open with Fresno State on Aug. 31.

The Not So Obvious: Brett grew up in Japan, home of his mother, where he participated in baseball, basketball, soccer and the martial art of aikido.

The Obvious: The Trojans are expecting big things from senior defensive end Christian Rector, who is also a candidate for post-season honors.

The Not So Obvious: Christian interned with the non-profit Weingart Center’s General Relief Opportunities For Work Program in the spring of 2019, helping recently-released prisoners write resumes and apply for jobs.

The Obvious: Names on an athletic roster are always interesting especially when a player’s “real” name is not the one listed in the game program.

The Obvious: For one reason for another, many players go by initials or a nickname.

The Not So Obvious: Three nicknames on the 2019 Trojans come to mind: ILB Solomon Tuliaupupu’s nickname is “Solo,” ILB Palaie Gaoteote IV’s is “E.A.,” OT Bernard Schirmer’s is “Beeno” and S Briton Allen’s is “Bam.”

The Obvious: Jacob Lichtenstein is a sophomore defensive lineman for the Trojans.

The Not So Obvious: With a last name of Lichtenstein,no USC football letterman in Trojans’ history has a longer non-hyphenated single word surname than Jacob’s 12-letter last name.

The Obvious: The Trojans’ “family” get even more personal when brother or cousins play on the same USC team.

The Not So Obvious: On the 2019 roster,  OLB Abdul-Malik McClain and WR Munir McClain are USC’s only brothers. DL Marlon Tuipulotu and S Talanoa Hufanga are cousins, as are TB Vavae Malepeai and OT Bernard Schirmer.

The Obvious: No question that Trojans’ sophomore wide receiver Amon-Ra St. Brown is a player of many talents.

The Not So Obvious: You may be interested to know that Amon-Ra is fluent in German (his mother, Miriam, is from Germany) and French (he lived in Paris as a fourth grader).

The Not So Obvious: Drew (photo above) mentored middle school students at Emerald Academy in Knoxville.