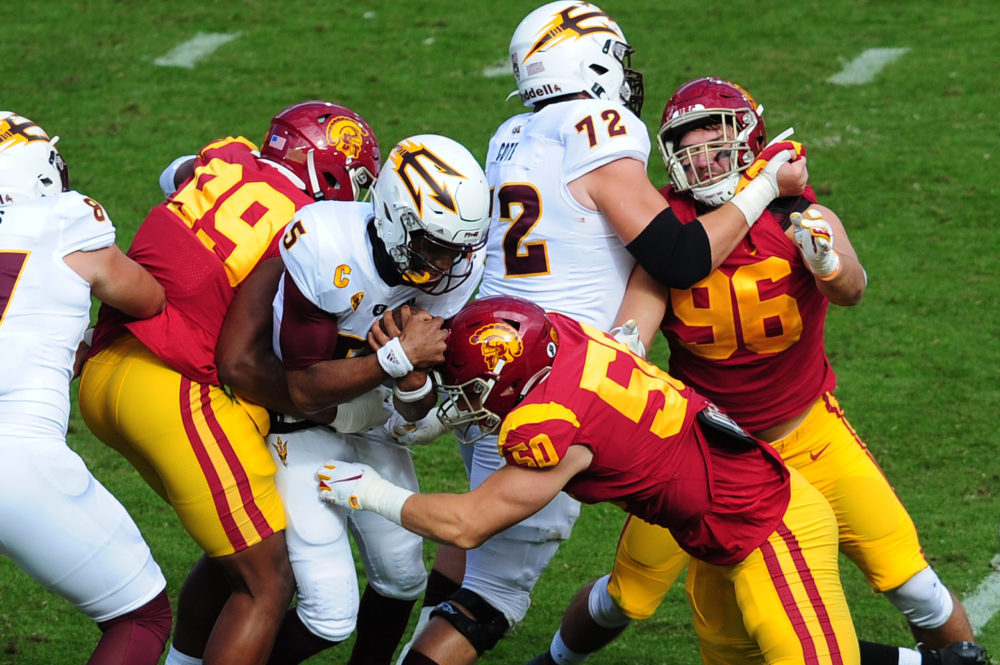 The Obvious: As most of you know, a number of Clay Helton’s players were either unable to fully participate in USC spring practice or were in a rehabilitation program that prevented them from much if any sort of contact.

The Not So Obvious: Some of those missing will be expected to be main players perhaps more so now if the Trojans suffer any more departures by way of the NCAA Transfer Portal. The transfer portal is an issue that is affecting many programs around the country – both bad and good. So here now is the O/NSO’s take of performers that we feel need to be ready to go either at the very beginning or sometime soon after the commencement of training camp practice, which starts the first week of August.

The Not So Obvious: The fact that Sopsher is fcoming from powerhouse Alabama and a defensive tackle at that, makes Trojans fans initially giddy all over. However, there are reasons he didn’t play at Alabama, and Ishmael hasn’t been available to find out the answers. Whatever those answers are, the fact that freshman defensive tackle Jay Toia has apparently departed the Trojans for another program makes the Sopsher factor a more urgent matter for success. You hate to put it all on one guy up front who hasn’t played hardly at all in two seasons, but the current circumstances may dictate it.

In terms of his Alabama career, Sopsher spent the 2019 and 2020 seasons as a defensive lineman for the Crimson Tide. He appeared in just one game as a 2019 freshman and was able to redshirt. Ishmael did not see time on the field in 2020 as a redshirt freshman, but he did make the 2020 SEC First-Year Academic Honor Roll.

The Obvious: Sophomore receiver Kyle Ford (6-2, 210) did not participate in spring ball due to continued rehab on his surgically repaired knee.

The Not So Obvious: The Trojans wide receiver unit is considered one of the premier skill groups in the country. If Kyle Ford, who was on almost everybody’s high school All-American list back in 2018, returns ready for action in August, the Trojans receiving game would be given a big boost.

It’s no secret that the opposition will try and double-team junior preseason All-America candidate Drake London, so there has to be viable alternatives, and if Ford is healthy, he certainly checks that box and the box for a physical receiver. As a freshman in 2019, Kyle did see some action in four late-season games (Colorado, Oregon, Arizona State, Iowa) and did have a 20-yard TD catch against Oregon. It will be a boon to the passing game if Kyle is good to go.

The Obvious: Senior nickelback Greg Johnson (5-11, 195) is part of a common theme of rehabilitation from knee surgery.

The Not So Obvious: Watching Greg Johnson develop as a USC football player has been an interesting process. If he can get back to form, his experience alone at the nickelback spot is priceless, especially in the pass happy Pac-12 Conference. His career stats bear out his importance to the defense. Greg has 65 tackles, including four for a loss of 26 yards (with a sack for minus 14 yards), eight deflections, two interceptions, two fumble recoveries, and a forced fumble. If he can elevate his game another notch, the Trojans’ secondary will be the direct beneficiary.

Up until his injury, Johnson had appeared in 29 career games with 16 starts. It’s always amazing that players like Greg never seem to be as appreciated until they’re no longer on the field. You can bet the Trojans’ defense appreciates Johnson’s efforts and knows what his experience means on the field.

The Obvious: In a normal offense, sophomore tight end Jude Wolfe (6-6, 250) would be a spotlight player, but the Trojans haven’t yet shown full use of a traditional tight end if there is such a position in Troy’s version of the Air Raid offense.

The Not So Obvious: Recovering from foot surgery and not participating during spring, there was no hotter 2018 tight end high school prospect (Bellflower, Calif./St John Bosco) than the Wolfman, so the O/NSO supposes that there is intrigue with Jude to find out how he will be used.

In his brief Trojans career, he has two catches for five yards (2.5 avg) while appearing in eight games. If he is healthy in 2021, this talent could have a big impact on the Trojans’ offense not only as a receiving threat but a blocker to bolster the questionable offensive line. Wolfe is more your traditional tight end trying to be productive in a non-traditional offense.

The Obvious: In spite of his history of injuries, talented junior linebacker Solomon Tuliaupupu (6-3, 240) may still be the most cautiously anticipated talent on the entire Trojans 2021 roster.

The Not So Obvious: After suffering through a series of demoralizing setbacks with both his foot and knee, how can you not root for this kid to make his presence felt in 2021. Maybe it’s just wishful thinking, but that’s fine. “Solo” has paid the price – over and over and over – so it would be sweet justice for him to take the field not only at any point but on special teams if need be.

Maybe Solo will make it back and maybe he won’t, but it would be buzzards’ luck if he doesn’t. Let’s not forget that coming out of powerhouse Santa Ana (Calif.) Mater Dei High in 2017, he was the Butkus Award winner as the nation’s top high school linebacker and was USC Today’s Defensive Player of the Year. We may all be seeing Solo’s comeback through our hearts rather than our heads, but the kid has talent, so what’s wrong with that? The fact is that he is the type of physical talent that could bolster a linebacking unit that could really use Solo’s return.

The Obvious: Senior linebacker LB Jordan Iosefa (6-2, 235) is almost the forgotten inside linebacker on a unit that needs his return badly.

The Not So Obvious: Hoping to return in 2021 from a knee injury, Iosefa needed additional arthroscopic surgery on scar tissue in the knee and sat out the abbreviated 2020 season. Let’s not forget that he was a 2018 starter and a 2019 team captain but didn’t play. You see, in 2019, he dislocated his kneecap in fall camp and had surgery, which sidelined him for that season. At this point, the last thing that Jordan wants to see is a hospital and a surgeon.

Despite the setbacks, Jordan does have numbers when he has been healthy. In his career, Jordan has 78 tackles, including seven for losses (with three sacks), six deflections, a fumble recovery and a forced fumble. He has appeared in 36 games with 16 starts. The Hawaiian native (Honolulu, Hawaii/ Saint Louis HS) could be a vital reinforcement at linebacker if he can maintain a healthy body. Because of his physical issues, one would have to consider at some level that Jordan remains a player of potential, which means there is a lot to accomplish in little time.

The Obvious: Senior defensive end Nick Figureoa (6-5, 260) could be a major player in 2021 after being held out of spring ball for recovery and rehab from shoulder surgery.

The Not So Obvious: An All-Pac-12 Academic selection, Figueroa has improved in almost every way imaginable and is a force along the defensive line. Check out his career stats, which reads 30 tackles, including eight for losses of 35 yards (with 4.5 sacks for minus 23 yards), plus a deflection and a fumble recovery. Nick has appeared in 19 games in his career, with six starts. In 2020, most agree that the former Cajon (Calif.) HS prep star had a breakout season by starting in all six games, which included 20 tackles, and team highs of seven for losses of 31 yards and 3.5 sacks for 23 yards. “Figge” was rewarded for his play by receiving All-Pac-12 honorable mention, Phil Steele All-Pac-12 third team, and Pro Football Focus All-Pac-12 honorable mention.

With the Trojans defensive line thinning rapidly from early departures and transfers, Figueroa will be needed to bolster a unit that could provide the success or failure for the defense. If he can remain healthy in 2021, there is no reason to believe he can’t compete for All-Pac-12 honors. With a shot for a future NFL opportunity, there’s also no reason to believe that Figueroa won’t be motivated to prove a point on the field.

The Obvious: And finally, any of the aforementioned players will be vital to the 2021 cause, and there are probably a few others that could be added to our list.

The Not So Obvious: In this day and age of college football injuries, rehabilitation time can be a case of timing is everything. No doubt the Trojans’ medical team along with the coaching staff are hopeful that when the bell rings in August, all the efforts to get everybody ready to go will first pay dividends on Howard Jones/Brian Kennedy Fields.