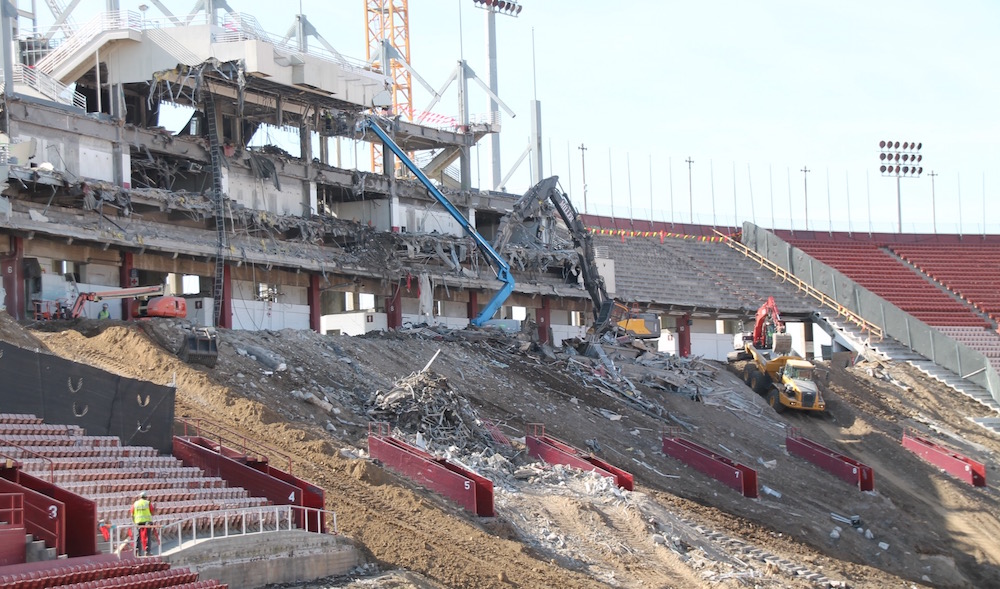 The Obvious: At a breakneck pace, work continues feverishly regarding the current phase of Coliseum renovation with a mid-August target date for football playability and fan accessibility.

The Not So Obvious: Symbolically, the goal posts have returned to their rightful positions, although the playing surface is newly shaved dirt with the process readying to plant new sod in time for the Rams’ first home exhibition game against the Raiders on Aug. 18 and the Trojans’ 2018 kickoff against UNLV on Saturday, Sept. 1. It figures that that Clay Helton’s Men of Troy will get in an August practice and/or scrimmage in the Grand Old Lady prior to the season opener.

The Obvious: Coliseum renovation work also continues as it pertains to installing the new seats below the press box.

The Not So Obvious: One very noticeable aspect of the new seats is the color contrast between the new and old. While the older seats in the lower section of the Grand Old Lady appear a faded “cardinal”, the new seats have more have a darker color, perhaps brought on by their newness. Looking ahead to the 2019 season, it’ll be interesting to see how that affects the entire inside appearance of the Coliseum contrasted by the “tower” and press box.

The Obvious: The Coliseum restoration project has done a relatively good job of producing video to keep Trojan fans and the general public informed on the progress.

The Not So Obvious: As a public service, here is the latest Coliseum video update:

The Obvious: One of the potential casualties of the Coliseum renovation is the question of tailgating and its experience and location.

The Not So Obvious: In case you missed it, USC Athletics, USC Sports Properties and Tailgate Guys announced this week a new partnership that will begin this football season and provide USC donors and fans access to reserve turnkey, premium tailgate services that will be located just outside the Coliseum. The Tailgate Guys partnership with USC Athletics was finalized by USC Sports Properties, which is owned by FOX Sports’ Home Team Sports.

The Obvious: The term being used in the new tailgating partnership is “tailgate community.”

The Not So Obvious: The “tailgate community” will offer all levels of premium tailgate items that can vary from a small group of five guests up to large scale event offerings for 1000+ guests – complete with bellhops, catering, high peak tents, tables with linens, media TV packages and more. Trojan donors and fans can expect the same kind of high-level of tailored services from Tailgate Guys that this entity offers across the nation along with some local touches that will cater to the L.A. community.

The Obvious: This new organization of tailgating specialties, as mentioned, is called the Tailgate Guys.

The Not So Obvious: According to Parker Duffey, President and CEO of Tailgate Guys, “When we started this business 10 years ago, our goals were set on expanding all over the country by working with the biggest and best in the sports industry. A partnership with USC was on that list and being able to provide our industry-leading convenience and service will add value for Trojan fans.  We are excited to serve another premier PAC-12 campus!”

The Obvious: Trojan fans take their tailgating very seriously and even more so with concern over the restrictions of the renovating Coliseum and the adjacent, under construction George Lucas Museum of Narrative Art, which has removed a large chunk of parking.

The Not So Obvious: FYI, for more information on the new USC tailgate packages, which will be available on June 26, visit www.tailgateguys.com/home/usc, call 213-663-0001, or email [email protected].

The Not So Obvious: The O/NSO says you’ve got to be kidding that Trojans’ safety Troy Polamalu didn’t make it. Troy not being voted in is a joke no matter how you look at it. We get Michigan’s Charles Woodson making the cut, but these types of awards lose their credibility when guys like Polamalu don’t get voted in.

The Obvious: Super prep athlete Drake London (6-4, 200) from Moorpark HS has committed to the Men of Troy to play both football and basketball but will use a football scholarship.

The Not So Obvious: London has gotten lots of attention and what more do you need to know than this talented player had offers from Notre Dame, UCLA. When the O/NSO thinks of football/basketball combo athletes coming out of high school to USC, we immediately conjure up names like Hall of Fame DB/S Ronnie Lott (Rialto, Calif./Eisenhower) and All-America LB Duane Bickett (6-5, 235/Glendale, Calif./Glendale HS).

The Obvious: And finally, there has been debate on which game in 2018 is the most important.

The Not So Obvious: Nobody asked the O/NSO, but we think the most important game of the upcoming season will be at UCLA on Nov. 17 in the Rose Bowl. So much at stake from recruiting to a potential Pac-12 South Division title, there is no way that Clay Helton can afford to give an inch to first-year Bruins head coach Chip Kelly, and no further explanation needed.