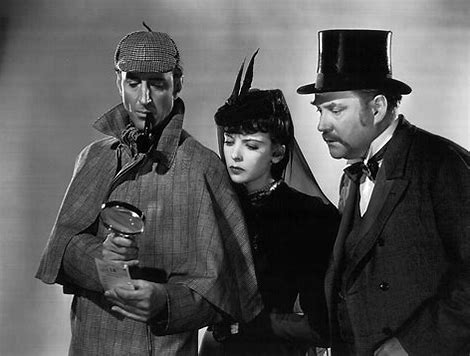 The Obvious: The USC Trojans played their last game of 2020 on Friday night, Dec. 18, when they met the Oregon Ducks in the Pac-12 Championship Game in the Coliseum.

The Not So Obvious: Still lingering from that final game of 2020 has been the great Sherlock Holmes (photo above) mystery of what has since become of Trojans first team All-Pac-12 sophomore quarterback Kedon Slovis, who on the final play of the Trojans loss to the Ducks was last seen on the ground and then eventually walking slowly towards the Coliseum players tunnel apparently injured but to what extent? We have yet to learn from Trojans head coach Clay Helton or the USC athletic department the extent of the gifted quarterback’s injury or non-injury since no information has been released or volunteered.

The Obvious: There is some wondering by the media and USC fans whether Kedon Slovis has had surgery unbeknownst to the public.

The Not So Obvious: No Slovis information has spawned wild speculation. Certainly, the physical condition of Slovis is a very personal matter, and Helton rightfully is respecting that. Then again, Slovis is the All-Pac-12 quarterback of the conference’s No. 1 passing team, and it would seem that some information regarding Kedon’s situation would at the very least eliminate all the gossip and coverup rumors.

The Obvious: There is the old saying that no news is good news.

The Not So Obvious: In the case of Kedon Slovis, the aforementioned “old saying” should be amended to “no news is not good news.” There was already deep speculation during the past season that there was something wrong with Slovis and his arm and/or shoulder. Maybe some of the potential Slovis passing issues were just as much mental as they were physical. Then again, seriously, how many sacks, hits, and constant physical harassment can a quarterback, who in many cases was running for his life, endure in the Air Raid offense?

The Obvious: In 2020, the Trojans finished last in Pac-12 team rushing.

The Not So Obvious: Certainly, a running game can be a quarterback’s best friend. A competent running game, mixed with some play-action passes, can relieve a great deal of pressure and help preserve a signal caller’s health. Kedon Slovis didn’t appear to have many play-action passes at his disposal under offensive coordinator Graham Harrell, who reportedly is in the process of interviewing for the Boise State head coaching opening.

Consider the good old days when the Trojans were a strong and balanced offense and play-action passes were always part of the playbook repertoire. For reasons known only to the current offensive coordinator, play-action is not a regular part of the playbook – nor is misdirection running plays or a small sample size of screens and draws. Taking snaps from under center – even in short yardage situations – have been forbidden with the justification being “it’s not what we do.” What kind of an explanation is that?

The Obvious: Recently fired O-line coach Tim Drevno was hired by Clay Helton after Drevno was fired at Michigan.

The Not So Obvious: It was certainly no crime for Helton to hire Drevno (2017) to be part of his staff. However, Drevno, a longtime offensive line coach, at the time was named the running backs coach after the departure of respected Deland McCullough. Drevno was a fish out of water as a running backs coach and don’t think that the running backs didn’t know it. At one point, Drevno was coaching both the running back and assisting with the offensive line. You can’t make this stuff up, Palie. In fairness, Helton had hired a really good one in McCullough to coach his backs, but McCullough lasted just one season before departing to the Kansas City Chiefs.

The Not So Obvious: As a refresher, Callaway was hired by Helton because – among other things – Neil was a Helton family friend of Gentleman Clay’s father, Kim Helton. Callaway, who was hired in 2016, didn’t even last a full season in his final campaign in 2018. Some say Callaway quit intentionally during that fateful season to take the heat off of Clay Helton, who was again being targeted for the performance of the offensive line. The performance and recruiting of the USC offensive line – once the envy of the nation – has been a constant theme of weakness during the Helton era, so to hold Drevno totally accountable would be unquestionably unfair.

The Obvious: Nobody knows better what it has been like to have a mediocre offensive line like Kedon Slovis.

The Not So Obvious: Slovis has so much class and respect for his teammates along the line that he would never be critical in public. It wouldn’t be shocking to the O/NSO if even in private Slovis wasn’t critical of his teammates. He’s that kind of teammate. Does he deserve an offensive line to match his skills? We’ll answer that with this question: Has the Air Raid offense ever won a Pac-12 title or any team won a national title with it?

The Obvious: In this new age of social media and the marketing and promoting a player’s “brand,” the Trojans used all that was available to herald last Saturday’s announcement by defensive end Korey Foreman, the nation’s No. 1 prep recruit, that he would be a Trojan.

The Not So Obvious: As part of the new age branding and marketing of players, a picture of Korey Foreman flexing on the enormous promotional video board outside and above the Galen Center was put up and easily seen from the 110 Freeway. The only question the O/NSO has of cleverly using the giant billboard with Foreman is why not the other recruits from the Class of 2021, as well?

The Not So Obvious: Ross (6-0, 185) keeps the recruiting by Trojans recruiting wiz Donte Williams in high gear, but the Class of 2022 could sure use some 5-star and 4-star offensive linemen. In fact, not only do the Trojans badly need quality offensive linemen, they also have to now convince high valued prep running backs to come to Troy in spite of the Men of Troy finishing last in Pac-12 rushing statistics (97 ypg.).

The Obvious: There is no higher honor for a football player than to be named to the Pro Football Hall of Fame.

The Not So Obvious: Two former Trojans, offensive tackle Tony Boselli (Jacksonville Jaguars)  and linebacker Clay Matthews (Cleveland Browns) are among the 15 modern era finalists for induction into pro football’s biggest shrine, which is located in Canton, Ohio. The announcement of the Class of 2021 will be revealed during the NFL Honors on Saturday, Feb. 6. Best of luck to both deserving Trojan legends.

The Obvious: And finally, another no surprise when it was announced early in the week that senior wide receiver Tyler Vaughns is also heading to the NFL.

The Not So Obvious: It was time for Tyler to test himself for the next level, and he believes he is ready. So, the only question now after all the recent Trojans NFL announcements is who will be next?