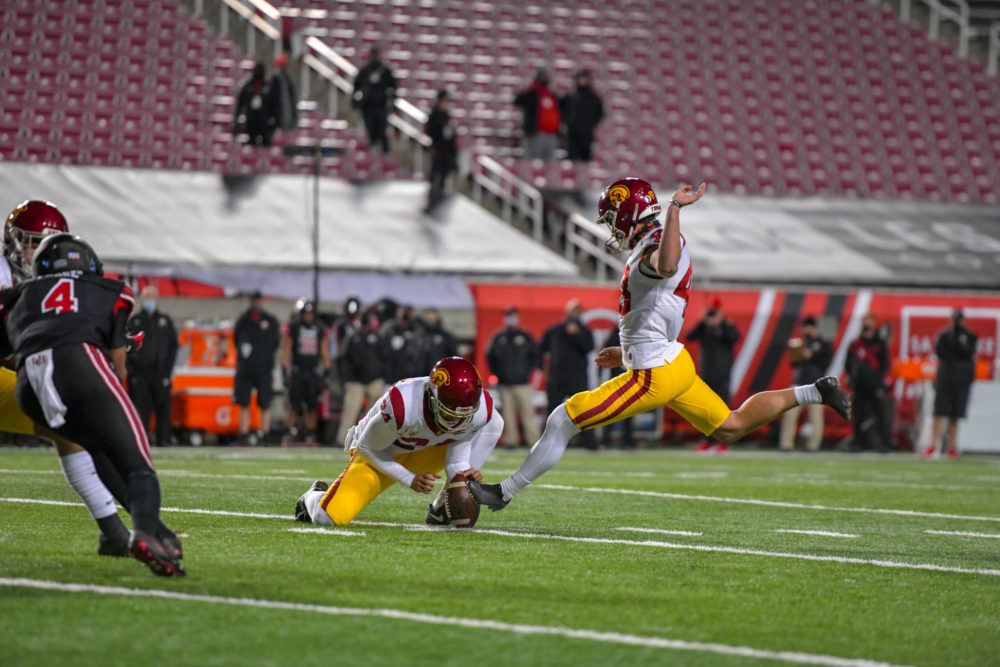 The Obvious: When USC spring practice begins in a little more than a week (Monday, March 29), there are two things for certain on special teams. The Trojans will be into the second season of Sean Snyder’s special teams leadership, and the special teams will probably be the most underpublicized aspect of spring ball.

The Not So Obvious: There are two things that are uncertain regarding special teams. One of those uncertainties is not knowing what Snyder has in mind with the 2021 unit other than already knowing who his lead candidates are for kickers and punters. The other uncertainty is how Snyder will restructure his coverage and return teams, which were improved (coverage) and somewhat disappointing (return teams) after last season.

The Obvious: It’s certain that sophomore Parker Lewis will return as the probable Trojans kickoff specialist, and it’s also certain that Lewis will also handle the placekicking responsibilities.

The Not So Obvious: Last season as a true freshman, Parker Lewis was 9-of-13 on field goal attempts, so there is uncertainty whether he can increase his accuracy. It is also uncertain whether Lewis will actually be challenged for the position. Last season in August training camp, it was the surprising decision of special teams coach Sean Snyder to award Lewis the duty as a true freshman, which sent the original incumbent, veteran Chase McGrath, packing and eventually landing at Tennessee.

The Obvious: Last season, Parker Lewis proved a certainty as a kickoff artist, having 22 touchbacks on 38 kicks, and Lewis also proved with certainty when called upon that he is adapt in executing onside kicks, two that were recovered by the Trojans.

The Not So Obvious: While Lewis will continue to get better, there is still uncertainty how he will perform with fans in the stands, and there is uncertainty that despite some good moments, can he do it at Notre Dame, which will be the acid test? No doubt, Lewis will face a whole different sort of pressure as a sophomore that he didn’t have to deal with in 2020.

The Obvious: There is certainty that the 2021 punter for the Trojans will be Ben Griffiths, and certainty that Griffiths has the type of leg that could take him to the NFL in the future.

The Not So Obvious: There was uncertainty going into 2020 after what Griffiths experienced under former special teams coach John Baxter, who seemed to retard the progress of the young punter and former professional Australian rules football player. If there is uncertainty of Griffiths – who averaged 46 yards per punt with seven kicks more than 50 yards, forcing eight fair catches, and placing half his punts (18) inside the 20-yard line – is can he get better and become an all-star performer?

The Obvious: There are two certainties regarding the Trojans and their return game. One certainty is that there is plenty of room to get better, and the Trojans need to get vastly better if they want to win the Pac-12 title.

The Not So Obvious: The two uncertainties regarding the return game are who is going to replace punter Amon-Ra St. Brown and Tyler Vaughns (both of whom were underwhelming by averaging around a combined five yards a return), and who is going to handle the kickoff return game and make it a difference-maker? Sean Snyder has some work to do, although some of the uncertainty will probably be alleviated by sophomore Gary Bryant Jr., who flashes all sorts of potential.

There is also uncertainty how many of the new freshmen – many exceptional athletes – during spring will make an impression on special teams coach Snyder, who has proven by his bold move to replace Chase McGrath with Parker Lewis in 2020 that he is open-minded. How might speedster running back Kenan Christon play into the mix if called upon? One of the strong newcomer candidates for the return games, freshman Calen Bullock from Pasadena (Calif.) John Muir will participate in spring ball. In 2019, Bullock returned seven punts for 125 yards (17.9 avg) and five kickoffs for 80 yards (16.0 avg).

The Obvious: It was certain that with Sean Snyder as the new special teams coach in 2020, things had to get better when it came to kickoff coverage, and it was confirmed after 2020 results that the coverage game was upgraded considerably.

The Not So Obvious: In 2020, the Trojans, without the benefit of spring ball, brought on all sorts of uncertainty to special teams. The Trojans alleviated that uncertainty in 2020 by allowing opponents just 17 yards per kickoff return. The other uncertainty going into 2020 was punt coverage. That special team aspect showed good returns by allowing just 61 return yards, half coming on one Utah Utes return. As with most seasons, the uncertainty heading into 2021 is getting the two units – kickoff and punt defense – to continue to improve and increase coverage productivity with a new cast of personnel. Another uncertainty but a positive one is just how many starters on offense and defense will Snyder use to add balance to his units?

The Obvious: It’s certain that highly regarded snapper Damon Johnson, who has been USC’s long snapper since the 2017 season and a likely candidate again for pre and postseason national honors in 2021, will return, and it’s certain that punter Ben Griffiths will return as holder for placekicks.

The Not So Obvious: There are two uncertainties in this area that must be addressed. First, now that backup holder and former quarterback Matt Fink has moved on, there is uncertainty regarding who will be the Trojans backup holder. The other uncertainty is who will be the backup snapper for Johnson? Will the Trojans be looking at names like walk-on Jac Casasante or former Purdue transfer Nathan Weneta? That confirmation will be addressed shortly when the spring roster is released.

The Obvious: And finally, it’s usually a given that special championship teams have outstanding special teams.

The Not So Obvious: We may not find out definitively this spring if the special teams product will indeed be special, but we do know that head coach Clay Helton and special teams coach Snyder know its importance for a championship run.