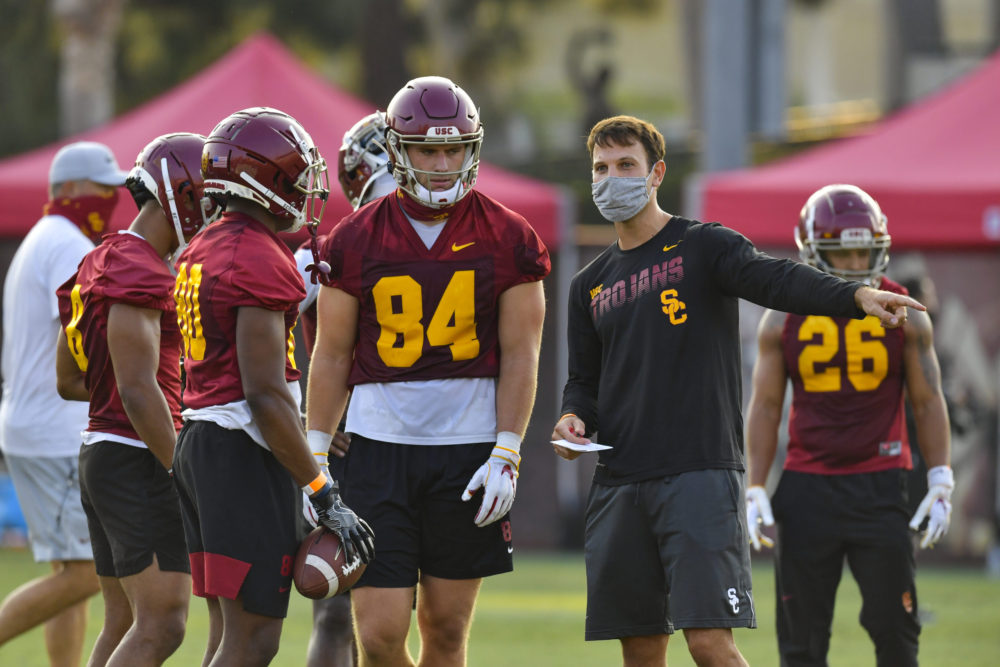 The Obvious: When USC spring practice begins in a little more than three weeks (Monday, March 29), there are two things for certain on offense. The Trojans will still be running the Air Raid Lollapalooza for the third consecutive season, and offensive coordinator Graham Harrell (photo above) remains its lead architect-in-chief.

The Obvious: When USC spring practice begins. there are two things for certain on offense. Former offensive line coach Tim Drevno (fired) and tight ends coach John David Baker (now at Mississippi St.) are no longer on the coaching staff, and Clay McGuire and Seth Doege are the new O-line coach and tight ends coach, respectively.

The Not So Obvious: Nobody questions that coaching makes a difference even when you have elite talent and even if you don’t. However, to be honest, there is uncertainty of how much the recent assistant coaching changes will bring for offensive results in 2021. To be fair, USC defensive assistant coaching changes in 2020 did make a positive, visible difference, and the hope is that the offensive changes can also make a major impact. Naturally, there is uncertainty along the offensive line, and this seems to be a pattern no matter who’s the offensive line coach. To be honest, most USC fans are done with lip service about not only an impending physical running attack but productive tight end contributions, as well.

The Obvious: When USC spring practice begins, there are two things for certain on offense. Kedon Slovis will be the starting quarterback, and Matt Fink will be the backup.

The Not So Obvious: One of the major quarterback uncertainties heading into spring practice is the health of Kedon Slovis since Clay Helton admitted recently that Kedon suffered a shoulder injury against Oregon in the Pac-12 title game. Helton revealed, however, that Kedon is now healthy. However, Helton gave no indication regarding the ability of Slovis to toss a football with authority during spring other than to say his prized QB “will be involved,” whatever that means.

As for the other uncertainty, it’s not the question of returner Matt Fink and what he provides in support of Slovis but the impending spring competition between incoming freshmen signal callers Miller Moss and Jaxson Dart. How fast and how well will they establish themselves this March? There’s uncertainty there. Will they live up to the hype, especially Dart, who was named the 2020 MaxPrep National Player of the Year? The battle between the gifted frosh should be a true highlight of spring.

The Obvious: When USC spring practice begins, there are two things for certain on offense. The Trojans have three returning running backs – Vavae Malepeai, Stephen Carr, and Kenan Christon –and that’s without counting the addition of Texas Longhorns transfer Keaontay Ingram.

The Not So Obvious: The running back uncertainty begins and ends with a commitment to a running game. There is uncertainty in how much of an impact Texas transfer Keaontay Ingram will play in the competition. Can he wrestle the starting spot from Malapeai or Carr? And what about super speedster Kenan Christon, who is a true home run hitter? Following spring ball, will Christon still be a Trojan and headed to the NCAA Transfer Portal if he is listed behind Malepeai, Carr, and Ingram? Add incoming freshman Brandon Campbell, another Texan, to the mix this spring and the competition should be breathtaking.

The Obvious: When USC spring practice begins, there are two things for certain on offense. The Trojans have lost significant wide receiver talent to the NFL in Amon-Ra St. Brown and Tyler Vaughns, but the Men of Troy have significant returning talent in Drake London, Bru McCoy, and Gary Bryant Jr.

The Not So Obvious: The wide receiver uncertainty is how grad transfer K.D. Nixon, a former Colorado Buffalo, plays into the rotation for 2021, and we should get some idea during the spring of Nixon’s impact. The other uncertainty is the physical health of Kyle Ford, who was once considered one of the nation’s most elite recruits coming out of high school. It figures that Gary Bryant Jr. should have a breakout spring and contend for a starting spot, so that will put more pressure of uncertainty on returner John Jackson lll and incoming freshman Michael Jackson lll. Both will need to produce in spring to find their way into the rotation.

The Obvious: When USC spring practice begins, there are two things for certain on offense. The Trojans have enough tight end talent in Erik Krommenhoek, Jude Wolfe, and Josh Falo, and that competition will increase with the spring arrival of incoming freshman tight end Lake McCree.

The Not So Obvious: The tight end uncertainty is compounded by having a new tight ends coach in Seth Doege and his impact on a unit that has either underperformed in the past or has been misused. That in itself presents uncertainty. Another spring and yet another cycle of tight ends anticipation being a factor in Graham Harrell’s offense. Thus far, the tight ends have been window dressing, so there’s uncertainty there. Then again, no matter what happens this spring, how does this unit change with the arrival in fall camp of heralded Michael Trigg, the super athlete from Florida who has all the tools to be outstanding? Well, spring practice is for those that can participate, so the Triggs factor won’t affect competition beginning in March.

The Obvious: When USC spring practice begins, there are two things for certain on offense. The Trojans offensive line returns veterans like center Bret Neilon, tackle Jalen McKenzie, guards Andrew Vorhees and Liam Jimmons, and the offensive line has a new coach in Clay McGuire.

The Not So Obvious: The offensive line uncertainty begins with the latest USC offensive line coach, Clay McGuire. Another Texas native who was also once a respected high school quarterback, there is uncertainty whether McGuire will be able to coach up an offensive line group that has yet to distinguish itself not on an individual basis but as a unit. There are enough bodies for McGuire to mix and match, but is the talent level high enough to make the Trojans offensive a championship unit? Now that’s uncertainty.

Naturally, there is extreme trepidation and uncertainty over who will be the Trojans’ starting left tackle, which is now a huge replacement consideration now that departed Morris Award winner Alijah Vera-Tucker – who many believe with be the second first round USC OL draft pick in consecutive years (Austin Jackson being the other) – will next be seen in April’s NFL draft.

The Obvious: And finally, it has been said that offense scores points, but defense wins championships.

The Not So Obvious: Next Friday’s O/NSO will explore the Trojans defense, which has both its own certainties and uncertainties.