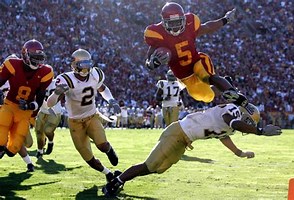 The Obvious: There’s little argument that former two-time All-America tailback Reggie Bush  (photo above) is one of the USC Trojans’ most legendary football players and truly one of the greatest in college football history, but Bush is also one of Troy’s all-time lightening rod figures.

The Not So Obvious: And there’s little argument that because of Bush’s misdeeds off the playing field, Bush and his family gave the NCAA an opening to administer draconian penalties like few universities have ever received. You can accurately opine that the NCAA can be a vicious, vindictive, untrustworthy, a malicious governing athletic institution, but the fact remains had the Bush family played within the NCAA rules, this whole nightmare of a situation could have been avoided. Basically, Bush received improper benefits, which makes one wonder why Reggie couldn’t have had the patience to wait until after his college career – perhaps no longer than a year – to become an overnight millionaire.

The Obvious: Arash Markazi, a former USC journalism student, is now one of the main columnists for the Los Angeles Times.

The Not So Obvious: Arash, a professional friend of the O/NSO, wrote a column in last Sunday’s edition of the Times informing the masses that Reggie Bush was back in L.A. to help promote a new Fox college football pregame show that is expected to rival ESPN’s “College GameDay” this fall. Bush will join former Trojan teammate and Heisman Trophy winning quarterback Matt Leinart, coaching legend Urban Meyer, former Notre Dame quarterback Brady Quinn, and host Rob Stone in the new endeavor. In Arash’s column, Bush said he’d like to be able to come back and be part of USC and be able to step foot on campus because he still loves being a Trojan and wants his own children to see where he went to and played in college.

The Obvious: As part of the Reggie Bush punishment, the NCAA torched USC’s football program with a two-year bowl ban, four years’ probation, and the loss of 30 scholarships over three years – and the Trojans were forced to cancel 14 victories that Bush played in, which meant USC losing its 2004 BCS national championship and Reggie eventually losing his 2005 Heisman Trophy.

The Not So Obvious: However, as the Trojans’ football program has gradually recovered from what seems like over a decade of fallout from NCAA penalties and self-inflicted issues, the NCAA gave Bush an additional penalty that you knew would someday affect him after his playing days were over. The NCAA ordered USC to permanently erase Bush’s name and likeness from campus and have no association with the fallen tailback, and that Bush was also forbidden from sideline access to practices and games. To this day, there’s no known direct communication between Bush and USC.

“There’s been no communication at all (with USC),” Bush told the Times. “I still hold a special place in my heart for USC, and I always will. I’ll always love that school and many of the people there are still some of my good friends. Nothing can ever break that bond.”

The Obvious: While the damage that Reggie Bush caused his alma mater was quite devastating, there’s a segment of the population that believes that it’s time for Bush to be restored to his rightful place in USC football history by the NCAA rescinding “permanent” and “disassociate” in his relationship with the university.

The Not So Obvious: Bush told the Times, “I would be lying to you if I said I didn’t want to go back and be a part of the school. I love USC. That’s just not where my mind is because I can’t control that, and my mind is focused on things I can control. Hopefully in this role (at Fox), I can shed some light and give some advice to these young kids about how to handle this journey through college. If I can help some of these young kids and make their lives and college experience better, that’s what I’m here for.”

The Obvious: The forgiveness position of USC regarding Reggie Bush is that its hands are tied by the NCAA.

The Not So Obvious: Validating the USC position of reconciliation with Bush, longtime USC sports information director Tim Tessalone told the Times, “USC has long said that we would love to have Reggie back around campus, but the NCAA has mandated the school permanently disassociate from Reggie.” And what would happen if USC allowed Bush back on campus? Tessalone added, “If we did so, it would lead to further NCAA penalties. We have tried several times to appeal the permanent disassociation with no luck. We would love to have him back. We’re going to keep trying, but this isn’t a USC decision.”

The Obvious: Matt Leinart and Reggie Bush, two former Heisman Trophy winners, formed arguably the greatest backfield in USC football history, although Bush had to return his Heisman Trophy due to his infamous misdeeds.

The Not So Obvious: Leinart says it’s time to forgive Bush and move on. The Trojans’ legendary quarterback told the Times, “What’s happening with Reggie is a travesty. I understand the situation and what happened, but we’re 13 years removed from it now and there’s still this black cloud hovering over him. I just wish the NCAA would allow him to move on. It just needs to stop. It’s ridiculous. I hope it happens at some point. To have Reggie back in college football in this role (broadcasting) might be the first step towards that happening.”

The Obvious: To the knowledge of the O/NSO, Reggie Bush has never issued a formal public apology to USC, the former players and coaches, and the devoted Trojan fans that suffered through the NCAA sanctions long after Bush had left for the NFL and was making millions of dollars and winning a Super Bowl ring.

The Not So Obvious: While the issue of Bush forgiveness is ongoing and Reggie is still paying the price by not being allowed to step foot on the campus he loves, in the opinion of the O/NSO, until Bush takes ownership and responsibility for his actions and shows remorse, the NCAA ban should remain in place. Just because he is one of college football’s all-time greats and is a USC football legend, doesn’t excuse what he did that hurt so many others. Many times, late WeAreSC publisher Garry Paskwietz and the O/NSO would agree wholeheartedly that until Bush manned up and said he was sorry to all who were affected by his and his family’s decision-making, he should remain persona non grata.

With all due respect to Matt Leinart, who we think may be the greatest Trojan ever to don the cardinal and gold, a “travesty” is what Bush brought his university and the pain he caused for so many players that were unable to participate in bowl games or win conference titles. Now that is a travesty. And let’s all remember, Leinart was also gone when the sanctions hit the program and never personally experienced the pain of the edicts. And as far as Leinart’s term of “ridiculous,” what was ridiculous is that so many thousands of USC fans had to suffer through sanctioned seasons and its residue because of Bush. It’s understandable that Leinart has remained a loyal teammate and supporter of Bush during thick and thin.

The Obvious: There is a segment of the population that believes that Reggie Bush should never have had to return his Heisman Trophy, a by- product of the NCAA sanctions.

The Not So Obvious: The O/NSO believes that Bush was the most explosive player at USC since another Heisman Trophy winner, O.J. Simpson. However, the reality is that Bush should have been ineligible during his final season at Troy and not on the playing field because of improper benefits. Yeah, USC might have lost games – remember the 2005 legendary performance against Fresno State in the Coliseum when Bush scored two touchdowns and had 513 yards all-purpose yards to guide the Trojans to a 50-42 victory? Look at it from a Fresno State perspective. Why did the Bulldogs have to play against Bush, who also ran for 294 yards, when he shouldn’t have been on the field in the first place? Sorry, but winning isn’t everything. There has to be some morality to the game.

The Obvious: There is the argument that whatever Reggie Bush and his family did wasn’t the first time or the last time a player and/or his family received improper benefits, they just got caught so why single him out?

The Not So Obvious: The answer to that is that USC tells players and their families what is proper and improper. If a player and/or his family choose to ignore the rules, the player and/or the family are responsible. They were warned; it’s safe to say the Bush family knew what they were doing but assumed that they thought they’d never get outed. Again, nobody in the Bush family has ever said they were sorry for what they did to USC and the football program. It’s basically been all quiet on the Western front.

The Obvious: And finally, maybe Reggie Bush can’t legally apologize for fear of a lawsuit from former players that were in the program at the time of the sanctions and who suffered the consequences and duress. If that’s the case, Bush should have a lawyer speak for him and explain the predicament to the masses.

The Not So Obvious: Reggie can’t control what the NCAA does in the future in his case, but he can control the future by what he does, so he could start the reconciliation process. A first step isn’t being a broadcast analyst of college football games for Fox. On the contrary, the first step is when one of the most electrifying backs we’ve ever seen stands behind a public podium in a major news/press conference and apologizes to his university, the former players and coaches at USC that paid the price for his indiscretions, and the devoted fans who also suffered a price.

Until Reggie does that, we believe his current fate will and should remain the same. For those that say Reggie has already paid a price, we agree, but he and his family are the ones who created the situation. It takes a real man to admit he has wronged others, and we think Reggie is a real man who now sees how this ordeal has affected his USC legacy after his playing days. His day of cardinal and gold has come. He can’t come home to campus or lead the team out of the Coliseum tunnel like his buddy Leinart. By NCAA rule, he has been excommunicated from his cardinal and gold homeland. Our country is one of accepting apologies and giving second chances, and if Reggie does the right thing by issuing some sort of public repentance, we all should strongly reconsider our current positions on the Bush matter and hope that the NCAA will consider following suit. In other words, the pigskin is now in your personal Red Zone, No. 5.