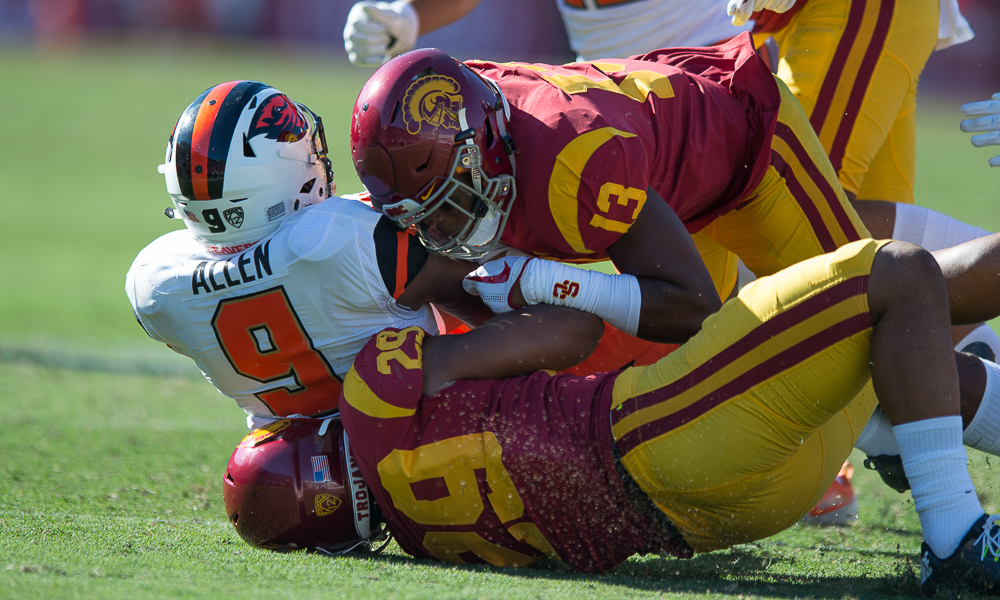 The Obvious: Heading into the highly anticipated month of November, a month when the USC Trojans (4-4 overall, 3-3 Pac-12 South) traditionally play their best football, the Men of Troy suddenly find themselves in what could be a precarious situation in terms of bowl eligibility. Needing two more victories with four games left in the regular season, the Trojans’ “march” to bowl eligibility begins on Saturday night (7 p.m. PDT) against the resurgent Oregon State Beavers (2-6, overall, 1-4 Pac-12 North North) in chilly Corvallis, Oregon.

The Not So Obvious: Adding to the intrigue of Saturday night’s game is this: Under mounting pressure regarding his future as Trojans’ head football coach, on Monday Clay Helton announced that he will now call all offensive plays instead of offensive coordinator Tee Martin, who will remain as offensive coordinator as well as wide receivers coach in additional to recruiting dynamo. It has long been questioned whether Tee Martin was actually calling the offensive plays. That full scrutiny will now be directed solely at Helton. In another reassignment purge, running backs coach Tim Drevno now handles the offensive line in place of controversial Neil Callaway who was fired. As for the move of Drevno to line coach, it leaves the perception – true or untrue – that Callaway was a major reason for the offensive line’s failures since his arrival in 2016.

The Obvious: It remains to be seen if Clay Helton’s offensive changes will translate to a critical victory over Oregon State, a team that has found itself to be rejuvenated.

The Not So Obvious: Resurgent Oregon State? Well, the O/NSO is here to remind you the Beavers accomplished a shocking 28-point comeback last Saturday to stun the Colorado Buffaloes, 41-34, in overtime in Boulder, no less. As for the Trojans, they are on a tense two-game Pac-12 losing streak, and at this point, it would be foolhardy to take the Pac-12’s traditional doormat Beavers as a gimme. Besides next Saturday’s homecoming game with Cal in the Coliseum, the Trojans would be well advised to pick up that sixth victory before they conclude the season with traditional rivals UCLA (away/Nov. 17) and Notre Dame (home/Nov. 24).

The Obvious: The Trojans opened a 16 ½ -point favorite over Oregon State.

The Not So Obvious: The Trojans lead the series with Oregon State, 62-11-4, dating back to 1914. The Trojans have obviously won more than 50% of its games against Oregon State; however, four of the Trojans’ five losses in Corvallis have come since 2000. The Trojans lead the series with Oregon State, 62-11-4. The Trojans have won 35 of the last 39 meetings with the Beavers (a loss in 2000 snapped Troy’s Pac-10 record of 26 consecutive victories over the Beavers), but OSU has won three of the past eight. USC has posted 17 shutouts in the series (including 2 scoreless ties). In games against the Beavers in the state of Oregon, Troy is 19-7-1 (13-5 in Corvallis and 6-2-1 in Portland), with 11 straight victories before losing in 2000. Before the Cardinal and Gold posted a 31-14 victory in 2013 in its most recent trip to Corvallis (behind 3 TD runs by TB Javorius “Buck” Allen and three interceptions by the Trojan defense), the Trojans had lost three straight games at Oregon State and the last 4 out of 5.

The Obvious: Saturday’s game will be televised on FS1 (7 p.m. PDT).

The Not So Obvious: The FS1 broadcasters will be Justin Kutcher (play-by-play) and DeMarco Murray and Petros Papadakis as analysts. Papadakis was a three-year letterman tailback at Troy and co-captained the 2000 Trojans.

The Obvious: Due to a time conflict with the Lakers, Saturday’s Trojans’ radio broadcast from Corvallis will air live on KRDC 1110 AM and KGGI 99.1 FM (7 p.m. PDT) with Pete Arbogast (play by play), John Jackson (analyst) and Jordan Moore (sideline).

The Not So Obvious: The Oregon State broadcast can be heard on flagship station KEJO 1240 AM with Mike Parker (play-by-play), Jim Wilson (analysts) and Ron Callan (sidelines).

The Obvious: Saturday’s Corvallis weather forecast calls for morning fog and afternoon clouds with a high of 60 degrees, a low of 48 degrees, 85 percent humidity, and 10 percent precipitation. Kickoff temp is expected to be cloudy and 54 degrees.

The Not So Obvious: The real weather report is whether the Trojans, after last week’s painful loss to ASU, can be emotionally and physically be up to play the Beavers, a team that will be exited to play, given their emotional upset of Colorado last Saturday. We’ll see whether the “curse” of Reser Stadium rises up because it has been the scene of some of the Trojans greatest upset losses. No Trojans historian will ever forget when the Beavers upset the No. 1 Men of Troy 3-0 in 1967.

Offensively, we’ll find out whether having Clay Helton call all the plays will have a big impact on the Trojans’ offense, although the Oregon State defense gives up 45.6 point per game, which means that you or I could be a successful playcaller against this outfit. Trojans quarterback JT Daniels, who returns after a week’s absence due to a concussion, should have success against a Beavers’ defense ranked last in the conference. The Beavers defense is led by junior S Jalen Moore (72 tac, 1 for loss, 3 dfl,1 FF) and junior ILB Shemar Smith (50 tac, 2 for loss, 3 dfl) who are the top tacklers on a Beavers’ defense that rests in the nation’s “Bottom 6” in total defense, scoring defense, rushing defense and pass efficiency defense.

Once again, the focus will be on the Trojans’ offensive line against a weak Beavers defense and even more so now that RB coach Tim Drevno has returned to his natural coaching position of the offensive line. We’ll find out Saturday or in the ensuing games whether player personnel changes will be made along the line. It would seem that Oregon State would be the type of opponent that the Trojans’ O-line could have its way, but we’ll see whether the Trojans’ offensive line can actually dominate, and how much influence Drevno can have in a week’s time.

We’ll see whether Trojan wide receivers Michael Pittman and Tyler Vaughns have a field day against a weak Beavers secondary. In recent weeks, Pittman has been an especially dangerous weapon for the Trojans. Again, it remains to be seen whether the Trojans throw much to their tight ends.

Defensively, we’ll see whether the Trojans’ defense, which has been highly inconsistent against the run, will be able to stop Beavers outstanding true freshman RB Jermar Jefferson who leads the Pac-12 in rushing (five 5 100-yard rushing efforts in 2018, including a pair of 200-yarders). Jefferson is also ranked in the national Top 20 in rushing, rushing TDs, scoring and all-purpose running. OSU senior QB Jake Luton, who threw for 310 yards and a trio of touchdowns in the overtime win over Colorado, will throw to WRs Timmy Hernandez (41 rec, 458 yds, 11.2 avg, 1 TD), Trevon Bradford (32 rec, 333 yds, 10.4 avg, 5 TD in 2018, plus 9 tcb, 86 yds, 9.6 avg and 5 PR, 47 yds, 9.4 avg), and Isaiah Hodgins (37 rec, 532 yds, 14.4 avg, 4 TDs). We’ll see whether the Trojans’ linebacker and safety situation clears up somewhat with the return of starters like linebacker Cameron Smith and safety Marvell Tell lll. With the loss of another secondary performer, talented freshman safety Talanoa Hufanga (collarbone), we’ll find out whether the Trojans can fill that spot with production from perhaps versatile senior NK Ajene Harris. One bright spot last weekend was the return and play of senior Jonathan Lockett who saw time due to the secondary injury situation.

On Trojans’ special teams, we’ll see whether the Trojans can continue to get positive punt return yardage from Tyler Vaughns, who had a big 82-yard TD return last week against ASU in a losing effort. Of course, the Trojans special teams against the punt gave up a critical 92-yard TD punt return by ASU’s N’Keal Harry that hurt the cause.

The Obvious: The Trojans’ offense is averaging 27.14 points per game while the OSU defense is allowing 45.6 points per outing.

The Not So Obvious: Asked about taking over the offensive line and making changes, Trojans’ new offensive line coach Tim Drevno said, “Every day you roll out the balls and see the best guys and you have to produce in practice. We’re looking for the best players to put on the field to win. Nothing (starting) is locked around here. We have to get better every day, and you have to get better than you were yesterday. I am tweaking with things that they can take and what they can adapt to. A great team is a physical team.”

The Not So Obvious: Asked about the strength of the Oregon State offense, Trojans’ defensive coordinator Clancy Pendergast said, “The strength of the Oregon State offense is their running game. They do a really nice job in the combination blocks in their running game up front, and their backs are very patient. They do a nice job between the tackles and bouncing out into the perimeter. They are very much a control passing game. All their quarterbacks can make all the throws, impressive, and they like to push the ball down the field. Of course, they demonstrated that by coming from behind against Colorado. They’ve really improved as the season has gone on, and they’ve gotten a lot better.”

The Obvious: Jonathan Smith is in his first season as the OSU head coach.

The Not So Obvious: Smith is a local product from Glendora (Calif.) High where he was an outstanding quarterback before eventually being a fine quarterback for Oregon State. In fact, Smith, who played for former OSU head coach Mike Riley, led his team to the 2001 Fiesta Bowl.

The Not So Obvious: Oregon State will start senior Jake Luton (6-7, 230) at quarterback. Luton, who looks to be completely recovered from an earlier season ankle injury, is from Marysville, Washington and is the reigning Pac-12 Offensive Player of the Week for his performance in the overtime upset win at Colorado.

The Obvious: The OSU secondary coach is Greg Burns.

The Obvious: College football was once played consistently in the afternoon.

The Not So Obvious: This will be the 25th time that the Trojans play Oregon State at night. That’s the most USC night contests against any Pac-12 opponent. Next most: versus Washington State with 16.

The Not So Obvious: Oregon State has 30 players from California.

The Obvious: The Pac-12 has a funky rotating yearly conference football schedule.

The Not So Obvious:Because of the Pac-12’s schedule rotation, the Trojans will not play Oregon State (or Washington State) in the regular season again until 2021. Oregon and Washington will replace them in 2019 and 2020.

The Not So Obvious: OSU has an enrollment listed at 31,904 students.

The Obvious: And finally, ESPN comes out weekly with its updated post-season bowl projections.

The Not So Obvious: Providing the Trojans become bowl eligible, ESPN currently projects Clay Helton’s Trojans to be in either the Cheez-It Bowl (Phoenix/Dec. 26) against Utah State or the Hyundai Sun Bowl (El Paso/Dec.31) against Boston College. Does that fire up you up to contact your travel agent?