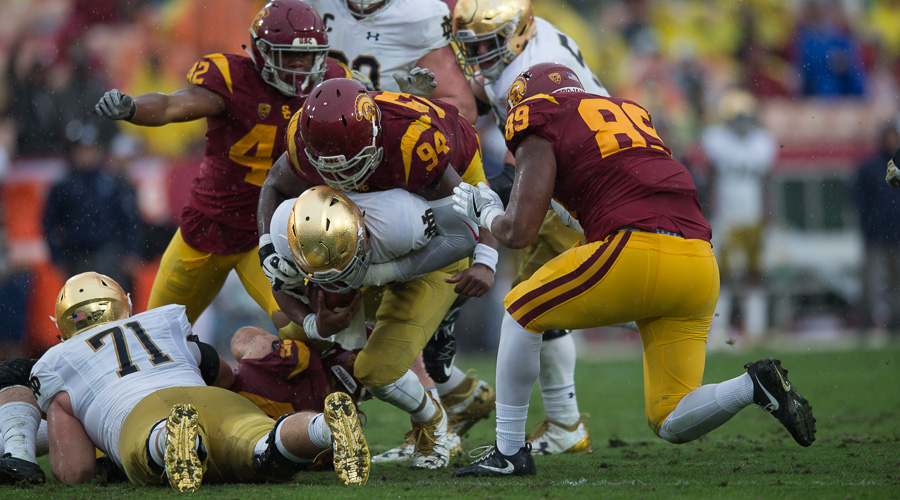 The Obvious from Los Angeles: The unranked USC Trojans (5-6, 4-5 Pac-12) must beat No. 3 and undefeated Notre Dame (11-0) to be bowl eligible. The Irish need to beat the Trojans to remove all doubt to be part of a semi-final bracket of the College Football Playoff. And Trojans’ head coach Clay Helton may need his team to pull off the miracle of miracles to save his job, although there are enough rumors now to the contrary. Yes, there’s certainly enough high drama for the nation’s greatest intersectional rivalry, which will be played on Saturday night (5 p.m. PT/8 p.m. ET) in the Los Angeles Memorial Coliseum, to keep the country’s interest at least at the outset of the 90th meeting between these two storied programs.

The Not So Obvious: Will this apparent mismatch still pack the Coliseum? If it does, will the Grand Old Lady resemble Notre Dame Stadium West? How many Trojans season ticket holders have dumped their tickets to wanting Irish fans? It’s safe to say that the buildup will spotlight mostly on Notre Dame and the CFP, but USC fans have a vested interest because of the coaching situation and the future outlook. It’s highly conceivable that a decision on Helton has already been made, and the powers that be are giving him the courtesy of coaching against the Irish or maybe not.

The Obvious: The Trojans opened a 10 ½ -point underdog to Notre Dame.

The Not So Obvious: The ABC broadcasters will be Chris Fowler (play-by-play), Kirk Herbstreit (analyst) and Maria Taylor (sidelines).

The Not So Obvious: The Notre Dame broadcast can be heard on flagship stations WSBT 960-AM and Sunny 101.5 FM with Paul Burmeister (play-by-play), Ryan Harris (analyst) and Jack Nolan (sidelines).

There will also be a national broadcast of the game on ESPN radio with Bill Rosinski (play-by-play), David Norrie (analyst), and Ian Fitzsimmons (sidelines).

The Obvious: Saturday’s Los Angeles weather forecast calls for partly cloudy with a high of 67 degrees, low of 53 degrees, 74 percent humidity, and 0 percent precipitation. Kickoff temperature is expected to be clear and 63 degrees.

The Not So Obvious: The real weather report is whether the Trojans won’t be physically and emotionally intimidated by an Irish team that will have plenty of motivation to decapitate the Men of Troy. With all that is swirling regarding Clay Helton’s future and the potential for a Coliseum fanbase that could half sound like an Irish sellout, we’ll see whether it’s all too much for a USC team that is on the verge of finishing with a losing record and not advancing to a bowl game.

Offensively, we’ll see whether the Trojans can have any success against the Irish defense, which has been excellent for most of the season. There will be a real gut check for the Trojans’ true freshman quarterback JT Daniels not in hearing the footsteps of the vicious Irish pass rush. and whether JT can focus on Trojans receivers like junior Michael Pittman Jr. Obviously, we’ll find out whether the Trojans’ offensive line is going to fold like it did last season at Notre Dame. If the Trojans’ offensive is manhandled physically by the ND defensive line, it won’t be whether the Trojans score, but whether they can help put up enough point to stay with the ND offense. The Trojans’ backs have been hampered with injuries lately, and we’ll see if senior starting RB Aca’Cedric Ware can handle the load against the nasty Irish defense. Look for sophomore RB Vavae Malepeai and possibly true freshman RB Markese Stepp to step up.  No question that all cardinal and gold eyes will be on Trojans’ head coach and play caller Clay Helton. Helton has not been able to get his offense to score touchdowns into the second half, and we’ll see whether he can mastermind the Irish defensive brain trust.

Defensively, we’ll find out whether the Trojans’ can somehow find a way to hang in there with the physical Notre Dame offense. Whether they can is certainly not the expectation. In fact, when you think what UCLA did on the ground (337 yds.) last week against the Trojans, you’ll get no argument that the UCLA running game isn’t in the same class as the Fighting Irish. It remains to be seen whether Trojans junior linebacker John Houston Jr. will be ready to play or even be effective if he is still feeling the effects of a hamstring pull last week against UCLA. The Irish can also throw the ball, and it’s no secret that they figure to do so by targeting the Trojans corners Iman Marshall and Isaiah Langley. It’s no secret that the Irish have outstanding tight ends, which will be a major challenge for Trojans’ safeties Marvell Tell lll and Ajene Harris.

On Trojans’ special teams, we’ll see whether the Trojans special teams can equalize the Notre Dame unit. For the Trojans, walk-on Michael Brown (6-of-8 FG, 30-of-30 PAT) continues to be effective, but against the Irish, he will have to be spot-on because every point will count. Irish senior PK Justin Yoon (15-of-19 FG, 38-of-40 PAT) has 57 career field goals, tying the school record (he already is ND’s career points leader, with 358). On the punting front, the Trojans Reid Budrovich averages 39.46 while Irish punter Tyler Newsome averages 44.17.

The Obvious: Clay Helton is in his third season as the Trojans’ head coach.

The Not So Obvious: In talking about the Notre Dame, Helton said, “This is a great opportunity to complete against one of the better teams in the country. Coach Kelly brings in an excellent team into the Coliseum. Offensively, I’ve been extremely impressed with (quarterback) Ian Book and what he’s been able to accomplish. To be put into service and show the leadership and really great decision-making that he has made through this campaign speaks volumes. He has some tremendous skill around him. To have that quarterback, he has led them very well.

“Defensively, it’s the best front seven we have faced to date. We’ve seen (DT Jerry) Tillery for a number of years, and he gets better and better and better each year and he is surrounded by four or five dynamic NFL football players. The ability to run the ball and protect the quarterback in this game is going to be critical against that defense. We look at it as a tremendous opportunity, and we can’t wait to get there.”

The Not So Obvious: Notre Dame’s offense is averaging 34.64 points per game while the Irish the defense is allowing 17.27 points per outing.

The Obvious: Brian Kelly is in his ninth season as Notre Dame head coach.

The Not So Obvious: Regarding the Trojans, Kelly said, “USC is a very dangerous football team, especially on the offensive side of the ball. When you look at the skill players they have like (Tyler) Vaughns, (Michael) Pittman, Amon-Ra St. Brown, (Velus) Jones, and the backfield where (Aca’Cedric) Ware has been really good. And JT Daniels is a freshman who has incredible arm talent, a very smart quarterback. This is a big-play potential offense. They can make plays all over the field, and they have a great win over Washington State, one on the top teams in the country.

“Defensively, I have a lot of respect for (Trojans defensive coordinator) Clancy Pendergast; he’s been in this business and he knows how to get his guys in good positions structurally. (Linebacker) Cam Smith just a hardnose, tough, physical kid. He’s been around awhile, and he has battled through injuries and keeps coming back. I have a lot of respect for him. Of course, (Marvell) Tell and (Iman) Marshall in the backfield are highly recruited players that are really good football players. Playing there is never easy and going across the country playing a team that has a lot of potentials.”

The Obvious: The USC quarterback is true freshman JT Daniels, who is a former 2017 National Gatorade National Player of the Year from Santa Ana (Calif.) Mater Dei High.

The Obvious: The Trojans and Notre Dame both played Stanford this season.

The Obvious: Notre Dame comes into the Coliseum undefeated.

The Obvious: It has become a tradition that the USC/Notre Dame game is played at night in prime time.

The Not So Obvious: This season’s USC-Notre Dame game is the 12th night encounter between the teams in Los Angeles, all with 5 p.m. starts. The teams have also played four night games at Notre Dame Stadium (2011 was the first and it also happened in 2013, 2015 and 2017).

The Obvious: The Trojans are coming off a tough 34-27 loss to UCLA.

The Obvious: The winner of the USC/Notre Dame game retains the shillelagh.

The Not So Obvious: The winner of the USC-Notre Dame game gets year-long possession of the jeweled Shillelagh. The foot- long shillelagh—a Gaelic war club made of oak or blackthorn saplings from Ireland—has ruby-adorned Trojan heads with the year and game score representing USC victories, while emerald-studded shamrocks stand for Notre Dame wins. For tie games, a combined Trojan head/shamrock medallion was used. The first Shillelagh was retired after the 1989 game when it ran out of space for the medallions and a second one is now in use. There are now 47 shamrocks, 37 Trojan heads and 5 combined medallions on the shillelaghs (1 USC win was later vacated due to NCAA penalty).

The Obvious: The Trojans have one player from Indiana (RB Markese Stepp, who played for the Fighting Irish of Indianapolis’ Cathedral High).

The Obvious: Trojans wide receiver Amon-Ra St. Brown is one of the great true freshmen in the country.

The Not So Obvious: Amon-Ra St. Brown’s brother, Equanimeous, was a wide receiver at Notre Dame (2015-17) who in his three meetings against the Trojans blocked a punt that was returned for a TD in 2015, caught a TD pass among his seven receptions in 2016 and caught another TD in 2017.

The Not So Obvious: Notre Dame has an enrollment listed at 8,448 undergraduate students.

The Obvious: And finally, there will be the usual Trojans’ recognitions during the game and at halftime.

There will also be a pre-game flyover featuring 11 vintage military aircraft from the Torrance (Calif.)-based civilian Tiger Squadron and a U.S. Air Force C-17 transport aircraft. The CFP National Championship Trophy will also be on display at the game.