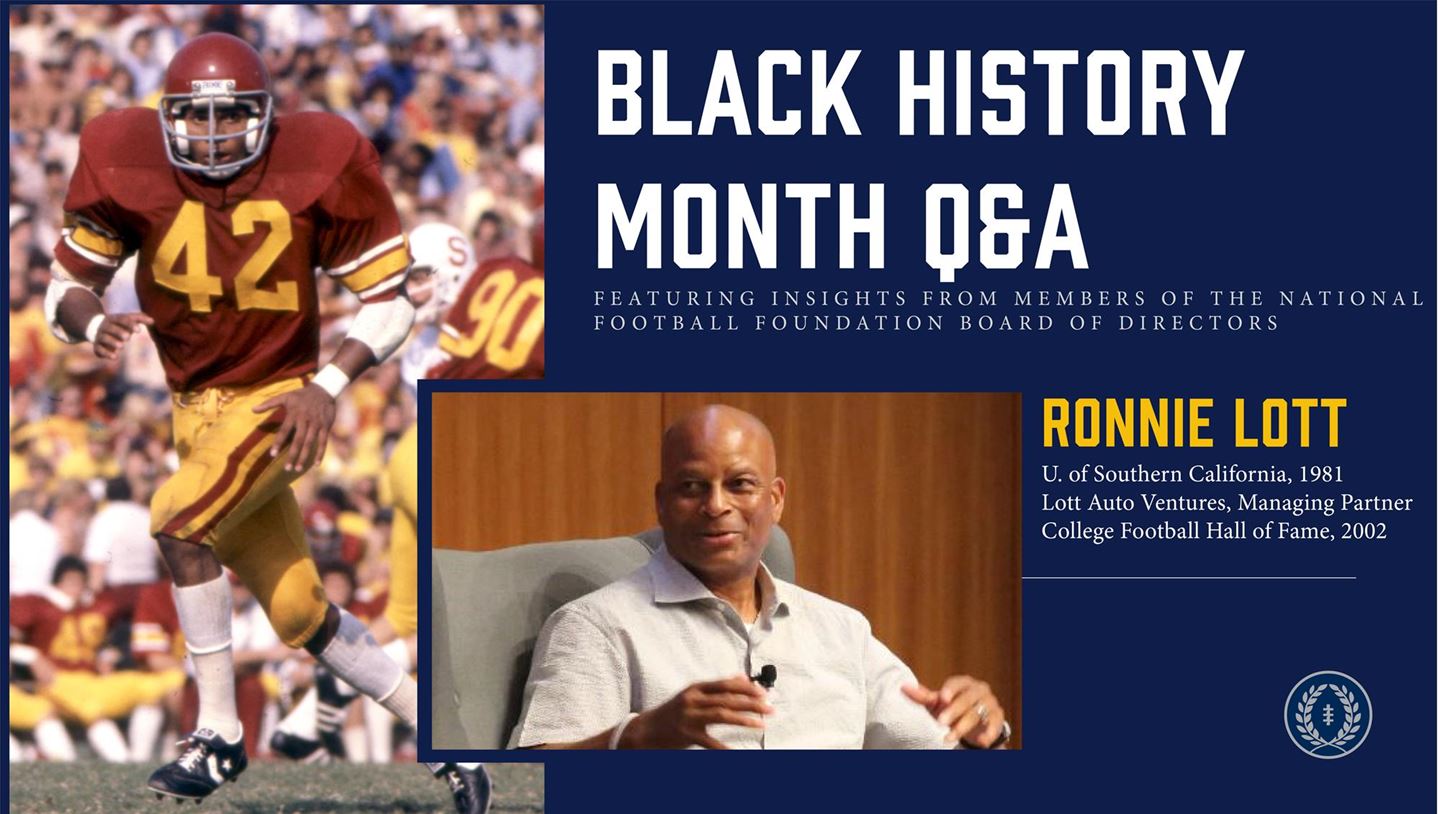 The Obvious: Trojans legendary Pro football and College Football Hall of Fame safety Ronnie Lott is a member of the National Football Foundation and joined the NFF Board in 2009.

The Not So Obvious: In recognition of Black History Month and in a recent NFF question and answer article with Ronnie Lott, the cardinal and gold immortal discusses his views on social injustice in the United States, memories of growing up in Washington DC, the role of athletes in social issues, his favorite historical black figures, and life’s lessons among other topics. Below is some excellent insight from one of America’s and USC’s greatest athletes – both on and off the field.

What’s your view about the social injustice in the country today?
I lived in Washington, D.C. and never thought I would see anyone disrespect a place where so many great people have walked through with a sense of protecting our country, a sense of protecting each other, a sense of understanding values and a place that is so sacred. I’ve learned, just like on the field, there are rules of engagement. You try to play within the framework of those rules of engagement. And I think, as a country, we need to do that.

What are some of your memories from living in Washington D.C. between the ages of five and nine?
I take a lot of values from my mom and dad and my mom’s mom, who was a domestic worker. I take a lot from them because of the things they had to do and things they had to live through. When I lived in DC, I witnessed people fighting for their liberties. We went to hear Martin Luther King’s speech, and we saw all the people who were there to demonstrate and march for justice. So, when you see things like that and people who are as brave as Martin Luther King, I ask myself, can I act now in the same way? Determined, kind, grateful all in a peaceful manner?

As a former Washington Football Team fan, what do you think of the name change?
I was a Redskins fan growing up, and the Redskins changed their name because they had to change their name. It makes me realize that progress has been made. Their name hurt a lot of people in the Native American community, so when you think about it, the Native American community is no different than any other communities that are trying to be heard. Like I saw in 1968, we are willing to fight to figure out how to make it right and how to do it the right way!

Do you think athletes should use their platform to take an active role in social issues?
Yes, we saw how effective it was with Jesse Owens. We saw how effective it was with Jack Johnson who went to Paris to sing instead of participating as a prize fighter because he felt that it was not fair for him to live here. So, one sees moments where athletes take a path to show others a different path. Over the years, athletes have done extraordinary things. The new movie, “One Night in Miami” is a great example.

I’ve always been an enormous fan of Jim Brown because of the things he’s done and never knew what propelled him. But, if Jim can have that strong of a purpose, then I have to have that same satisfaction of pursuing and helping others too. I need to continue to help people find ways to have an equal chance to live a productive life in this society. To me, Jim Brown is still teaching, and I’m still learning. What propels me around Jim’s example is his aspirations to constantly help others who are disadvantaged.

What did you take away from the movie “One Night in Miami”?
Jim Brown talked in the movie about the economic power, making me realize how important it is for my kids and for other kids of color. It has to be in the forefront, I was watching CNBC today, and they said, if you get a college education, it is worth a million dollars. So, if I can help a Black kid or any kid of color, who says, hey, can you help me get there, and he gets there without debt, to me that’s economic power. Those opportunities have to be manufactured by somebody giving them a hand up.

My coaches at SC, John Robinson and Bob Toledo, gave me a hand up, Bill Walsh gave me a hand up. They led me to understand how to compete, how to fight, and how to win. I continue to try to do that in my daily life. I still strive to do the same things I did on the field but now with my kids, family, friends and in business.

Do you have a favorite Black historical figure?
Martin Luther King and what he was able to do, the way he was able do it, the way he walked, the power he had and the humbleness in his heart. If you think of Jack Johnson, Jim Brown, Willie Mays, Hank Aaron, what you’ll see in all of those guys are fierce competitors but also humble human beings who are trying to make a difference. When you’re around Kareem Abdul-Jabbar, Magic Johnson, Michael Jordan, you start to realize their humbleness comes from the times they lost. The times they couldn’t get a championship. But they kept pushing, and they kept getting better.

We’re all gonna have losses. We’re all gonna lose at some point. But it’s about the guy who gets in the arena, Teddy Roosevelt will tell you that. We’re now having more and more people in the arena, and that’s powerful. Because that’s all you want. Just give me a shot. Give me a chance to be in the arena of competition. Give me a level playing field. And let me go to work to do my best.

What role has football played in your life and how do you apply those lessons in everyday life?
Football has meant a lot to me, helping me understand what you can achieve by working with others. If you have a common goal, you can find yourself achieving more towards that goal together. If you think about some of our great soldiers and their contributions to our country, you find yourself realizing they made so many huge sacrifices. I happen to be a product of a dad who served during the Korean War. He fought for our country and our liberties and sacrificed much to give our family a better life. I’m indebted to him. My dad would always talk about people having to earn respect.

What are some of the lessons you took away from the football field that might be relevant today?
You go out on the field with a purpose of trying to gain respect and achieve a common goal with your teammates.  That resoluteness on the field is the same for men and women who show leadership. Case in point, Kamala Harris here in the Bay Area, she demonstrated those determined characteristics. She is going to find a way to be fair, and a way to make sure she’s protecting us all. In sports on the field, you have a lot of those same dynamics.

What are some of the ways you’re helping to give back?
All-Stars Helping Kids is an organization we started because we wanted kids to have a level playing field. We wanted kids to have the opportunity to choose a better path and to be able to say, hey, I had the opportunity to get a job in software because I learned things that enabled me to choose a different path than the one I had known before. The point is, just like in sports, when somebody tells you that you can learn this and be really good at it, then teach you all the processes, they help take you down a path of the discipline you need to be able to succeed no matter what color you are. In this day and age, if you’re able to sell software, you can make a six-figure income and that’s pretty productive. But if no one shares that with you, it’s going to be hard to be prepared and have all the tools it takes to do that.

What’s the best advice you would give a young person who would like to follow in your career path?
I would tell them about when I first walked on the field. I was playing against some of the greats and realized that I could actually stop them. But there was a moment when I was trying to stop Charlie Joiner, he was still able to catch the ball even though I swiped at it and pulled at his arm and he only had one hand to catch the ball. I couldn’t believe it and said, how did that guy catch the ball? That moment I realized it is the same as being in a failure situation, so I tried harder. I learned about the moment and not being disappointed about that moment.

The thing I would tell a young kid is that it doesn’t diminish you even though you might have failed. You need to continue to pursue being your best at every moment because you have been given a gift, an opportunity.  I want kids to understand that it just takes more moments, more time and to never give up. Somebody is going to beat you, but it’s going to take those moments where somebody is going to give you a chance to win. Take that moment, exhaust that moment and never give up!

The Obvious: And finally, the O/NSO has known Ronnie Lott since his days as a legendary high school athlete from Rialto (Calif.) Eisenhower High School.

The Not So Obvious: The O/NSO has never come across an athlete with any more ability, character, discipline, and integrity, and that’s why the O/NSO felt compelled to reprint Ronnie’s views during Black History Month.