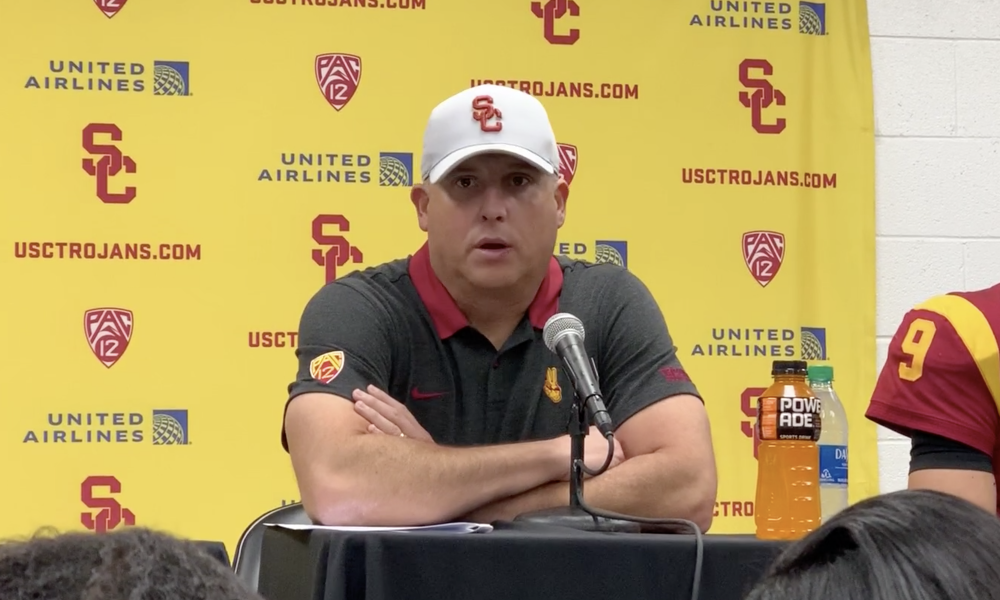 The Obvious: The NCAA recently made it official by announcing the Division I Council had voted to approve a plan that will allow all college athletes to transfer one time as an undergraduate without having to sit out a season. All current athletes who want to use the new transfer rule and be immediately eligible for the 2021-22 academic year will have until this July 1 to notify their current school that they’ll be transferring.

The Not So Obvious: After this one-time July 1 transfer deadline, this date will shift to May 1 for fall and winter sport athletes and July 1 for spring sport athletes in subsequent years. With spring practice coming to a close on Friday afternoon, Trojans’ head coach Clay Helton (cover photo above) will have to wait and see if his roster will be affected by the new NCAA Transfer Portal deadline for the upcoming season.

The Obvious: With the Trojans spring practice cycle concluding on Friday, how the new NCAA rule and deadline will affect the Trojans roster, or any other D-1 team, this season could bring some serious future hand wringing from coaches.

The Obvious: It has been reported that when the new NCAA transfer rule has cleared all the hurdles, the Pac-12 Conference will follow suit by allowing transfers within the conference to transfer free one time and receive immediate eligibility.

The Not So Obvious: Whoa Nellie, can you imagine the reaction if a UCLA star wide receiver transfers to USC or vice-versa and is immediately eligible? Can you imagine the amount of Pac-12 roster shakeups there could be within the conference after spring ball? You can just imagine after spring ball a Cal offensive tackle being named to his second unit and believing he was ripped off and also knowing the Trojans need help along the O-line immediately transfers to USC or vice versa. This could get wild.

The Obvious: The NCAA is working overtime not to let the college football spring practice doomsday scenario play out.

The Not So Obvious: Following this summer’s deadline, the NCAA’s new transfer rules will then require players in fall and winter sports to notify their current schools they intend to leave by May 1; spring sport athletes must do so by July 1, starting in 2022.

The Obvious: Moving forward, starting next September, there will be no more transfer gray area. The first transfer is free, no questions asked. Just fill out the paperwork and meet the deadline.

The Not So Obvious: It figures that this new transfer rule won’t be catching the Trojans or any other D-1 program by surprise, and there is reason to believe that football programs have been working on a template to immediately take advantage of the new rules. Like any other new rule, you can also bet there will be future gaming of the system by both the colleges and players. It will be fascinating to see how each side plays “the transfer free game.”

The Obvious: The new rule’s biggest effect may be on offensive linemen, a position that takes at least a year to master in a new system. So, an O-lineman may not reap the immediate eligibility benefits like other positions.

The Not So Obvious: However, a running back or defensive lineman may have the quickest entry into a game because adjustments may not be so challenging and complex depending on the systems being used.

The Obvious: As aforementioned, you can almost be assured that Trojans head coach Clay Helton and his staff have probably been already laying groundwork knowing the new NCAA transfer rule goes into effect in September.

The Not So Obvious: Of the new free transfer rule, Alabama head coach Nick Saban said, “We’re going to adapt to it and make it an advantage for us. I think what’s going to happen as you see how often in a lot of leagues, you know the good players go to a good team and the bad players leave good teams because they’re not playing. So, is that going to make the rich get richer?”

The Obvious: As spring ball finishes on Friday afternoon, one looks back and wonders if Clay Helton’s 2021 coaching staff, athletic director, and/or perhaps even Gentleman Clay himself either persuaded, demanded, strongly suggested, or through repeated self-examination concluded this spring practice cycle needed a concerted effort or even a mandate to return to the physicality of USC’s storied past achievements and to do it and not just talk about it.

The Not So Obvious: In other words, within the new NCAA practice guidelines, hit-baby-hit to elevate the level of physicality during practice to advance the theory that the benefits of increased manhood on a physical level far outweigh the risks of injury. The Trojans did hit and did pay an injury price during spring ball, which was not surprising, but it was likely worth the investment and improvement in preparing the Men of Trojans to be a more violent and aggressive team, which will publicly reveal itself to be true or not true come Sept. 4 when the Trojans open the 2021 season by hosting resurgent San Jose State in the Coliseum.

The Obvious: During the glory seasons of USC football, there have been those ferocious offensive lines, assassinating defenders showing no mercy and cutthroat intensity on both sides of the ball that has brought out names like Tim Rossovich, Richard Wood, Junior Seau, Ron Yary, Brad Budde, Ronnie Lott, Rey Maualuga, Chris Claiborne, Troy Polamalu, Tyron Smith, Matt Grootegoed, and the latest, All-America safety Talanoa Hufanga.

The Not So Obvious: Knowledgeable USC fans know physicality when they see it, and they’ll know when they see it again, they’ll probably be bearing witness to a championship USC football team. That being said, until physicality is on BOTH sides of the ball – not just defensively – it won’t be mission accomplished, so help me, Pete Carroll.

The Obvious: In the past five weeks of spring practice, injuries have mounted.

The Not So Obvious: It’s pretty obvious that the “new” physicality direction wasn’t just idle talk, and some of it can be judged on the numerous injuries, both through collisions and seemingly non-contact. In the past, we’ve heard all too many times how physical the “latest edition” of USC football is going to be only to be disillusioned, disappointed, and downright frustrated watching the promises of physicality become empty words, words which have little to no credibility. No doubt, USC football fans will be watching with scrutiny if 2021 is a refreshing transition from nail to hammer.

The Obvious: The list of the wounded and walking wounded has grown this past five weeks of spring ball.

The Not So Obvious: As spring practice comes to an end on Saturday, there has been a rapidly growing list of the injured (i.e. DL Brandon Pili (torn Achilles), QB Mo Hasan (ACL), NB Max Williams (ACL), C Andrew Milek (knee). The O/NSO – while not happy to see the almost daily injury report – does believe that the intent to become more physical has been accomplished within a number of position groups. You either practice to be physical or you don’t. You’re either committed to it or you’re not.

The Obvious: No question, the Trojans’ defense under DC Todd Orlando continues to run to the football and then tackle with bad, physical intentions.

The Not So Obvious: However, the jury remains out regarding the physicality of the Trojans’ offensive line. There’s no indication at the present time that defensive line opponents in 2021 are losing sleep when thinking of their upcoming seasonal encounter with the current USC offensive line. Hopefully, with another full off-season cycle under new strength and conditioning director of football Robert Stiner, progress will be made.

The Obvious: And finally, a number of you Walter Mitty types would love to be a USC football player just for a day.

The Not So Obvious: So, if you didn’t see it, Walter, here is a link to watching a day in the Spring Showcase life of center/guard Justin Dedich: https://www.youtube.com/watch?v=7kKK-LLyMKc