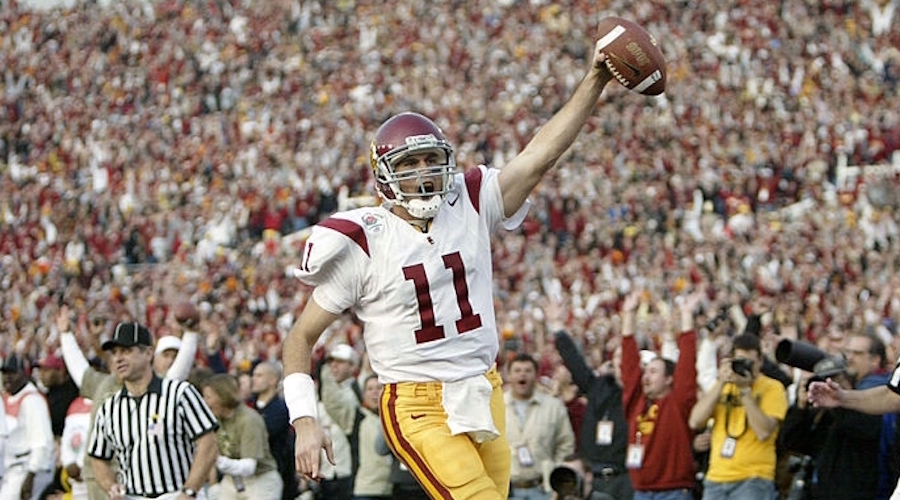 The Obvious: The USC Trojans and the Michigan Wolverines share some of college football’s most recognizable tradition such as uniforms, bands, fight songs, venues, and let’s not leave out an overall history of games played over the generations.

The Not So Obvious: The Trojans and Michigan have previouly met 10 times, the Trojans holding a 6-4-0 mark over the Wolverines. Of those ten meetings, only two games were played during the regular season – 1957 in the Coliseum, and 1958 in Ann Arbor’s “Big House.”

The Obvious: As aforementioned, the Trojans and the Wolverines have two of the greatest traditional marching bands in college football history, and their fight songs and pregame productions are synonymous with college football.

The Not So Obvious: To dive deep into the USC/Michigan rivalry, we should first open with a sampling of both bands and their nationally recognized set lists, which means fight songs and pregame festivities. So here is a little pregame warmup from both bands in their home environment, all of which should get your juices flowing.

The Obvious: For the record, the 1948 Rose Bowl Game was the first game ever played between USC and Michigan, a game that saw the Wolverines crush the Men of Troy, 49-0, before a capacity turnout of 93,000 in Pasadena.

The Not So Obvious: There wasn’t much to crow about if you were a USC fan, but the one thing learned was that if you’re going to play Michigan and compete, you’d better be equal or near the equal in physicality. Below is a little sampling of what the Trojans had to endure on that New Year’s Day. Unfortunately, there is no narration to this video, but we can see how football was played offensively and defensively during that time period. The head coach for the Trojans was Jeff Cravath, and his star Trojan was guard Don Clark, who helped lead the team to a final seasonal record of 6-2-1.

The Not So Obvious – In 1957, Trojans hosted Michigan in the Coliseum and put up a better fight this time around, losing to the visitors, 16-6, in front of 44,739. The Trojans’ head coach at the time was former USC captain Don Clark, and his captains were running back Jim Conroy and lineman Mike Henry. This USC team finished the season a woeful 1-9-0, and, for the record, this Trojans team was also banned from Rose Bowl eligibility due to a PCC violation.

In 1958, the Trojans made their first and only trip back to Ann Arbor to challenge the Wolverines. The result in “The Big House” was a tough 21-20 loss in front of 77,055. In spite of the loss, it was obvious the Trojans were getting better at playing the physical Wolverines.

This USC team, again under head coach Don Clark, finished the regular season at 4-5-1 and did not play in the Rose Bowl. The USC captains were linemen Ken Antie and Monte Clark. There were no video highlights available of the 1957 and 1958 games between the two universities.

The Obvious: In the 1970 Rose Bowl, the Trojans and the Wolverines relied on their defenses, and the Trojans had one of the great defensive lines in school history – The Wild Bunch. There were not very many highlights because of the defensive struggle, but the numbers that counted were the final score, as the Trojans defeated the Wolverines, 10-3, in a very physical game.  It was a tough game for Michigan because during Rose Bowl practice, Wolverines’ head coach Bo Schembechler suffered a heart attack and was not able to coach in the game.

The Not So Obvious: Although there is no full video highlights of the game currently available, at the end of the USC/UCLA game “classics” video, narrated by USC voice Pete Arbogast, there is a mention of the 1970 Rose Bowl between the Trojans and Wolverines in the video at approximately the 6:03 mark when we see the lone touchdown of the 1970 contest. The game decider was when USC quarterback Jimmy Jones connected with wide receiver Bobby Chandler for a 33-yard touchdown reception in the 3rd quarter. For the record, the Trojans’ field goal came in the first quarter courtesy of safety Ron Ayala. FYI, Chandler was named the Rose Bowl MVP.

The Obvious: In the 1977 Rose Bowl, the Trojans had another defensive battle on their hands with the Wolverines but came out on top, 14-6, before 106,182 fans in the famous Pasadena saucer.

The Not So Obvious: The Trojans had hoped to give the Wolverines plenty of power football with All-America tailback Ricky Bell leading the way. However, Bell got injured early in the game and was replaced by a budding freshman sensation named Charles White. White rushed for 122 yards while Trojans’ quarterback Vince Evans, who was the Rose Bowl MVP, was a true dual-threat quarterback, who kept the UM defense honest. Of note, Trojans’ first-year head coach John Robinson became just the second rookie coach from the Pac-8 to win a Rose Bowl. FYI, in the highlight video of the game below, Curt Gowdy calls the play-by-play for NBC.

The Obvious: In the 1979 Rose Bowl, USC and UM reacquainted and the game turned into another true defensive struggle, but the Trojans came away with an extremely hard-fought 17-10 victory.

The Not So Obvious: Trojans’ tailback Charles White rushed for 99 yards and scored the winning touchdown on a disputed three-yard dive into the end zone in the second quarter. It’s questionable if that touchdown would have counted if official replay had been in effect back then. Talented Michigan left-handed quarterback Rick Leach got hot in the second half by completing eight of 11 passes and ended up earning the co-Rose Bowl MVP Award with White.

The Not So Obvious: An interesting sidebar to the game was that Trojans’ head coach Larry Smith served once under legendary Michigan coach Bo Schembechler at Miami of Ohio and Michigan. The Wolverines were too much for this group of Trojans, who were led by quarterback Rodney Peete, who scored the only two USC touchdowns of the game. The Rose Bowl MVP was UM running back Leroy Hoard, who scored twice for the Wolverines in the final quarter for the win.

The Obvious: Trojans’ revenge was in the air for the 1990 Rose Bowl with the rematch between the Trojans and Wolverines. Yet another defensive test of wills, the Trojans outlasted Michigan, 17-10, in a game that featured a number of future NFL draft picks.

The Not So Obvious: Snapping a two-game Rose Bowl losing streak, the Trojans willed themselves to a tough 17-10 victory over the Wolverines before 103,450. The game was the final coaching appearance for Michigan’s Bo Schembechler. In a storybook moment in time, Trojans tailback Ricky Ervins, who grew up in the shadows of the Rose Bowl, scored the game- winning touchdown on a 14-yard run with 1:10 to play. Ervins finished with 126 yards rushing on 30 carries and was named the game’s MVP.

The Obvious: The 2004 Rose Bowl against Michigan turned into a national championship for Trojans’ head coach Pete Carroll, although the title came not on the playing field but the final AP ballot box. Many felt the Trojans should have been playing in the BCS title game, and the AP voters agreed after the Men of Troy dispensed the Wolverines, 28-14, in a game they dominated.

The Not So Obvious: The nation got to fully see what Carroll had built in Los Angeles and were treated to stars such as quarterback Matt Leinart, running backs Reggie Bush and LenDale White, wide receivers Mike Williams and Keary Colbert, and a defense spearheaded by middle linebacker Lofa Tatupu and defensive end Kenechi Udeze. Leinart was named the Rose Bowl MVP. The Carroll dynasty was now hitting on all cylinders.

The Obvious: You could argue that the best team in the country not playing for the BCS championship was the 2006 USC Trojans, and the Cardinal and Gold took out their anger by destroying the Maze and Blue, 32-18, in the 2007 Rose Bowl before 93,852.

The Not So Obvious: The big Trojans’ victory was the most points and biggest scoring margin ever over the Wolverines. Leading the way for the Trojans was quarterback John David Booty, who threw for four touchdowns and completed 27 of 45 passes for 391 yards. The Trojans’ defense was steel tough and was led by linebackers Brian Cushing, the Rose Bowl Defensive MVP, and Keith Rivers.  USC wide receiver Dwayne Jarrett was named the game’s MVP for a performance that included 11 catches for 205 yards and two touchdowns.

The Obvious: And finally, it should be noted that the Trojans and Michigan have no future regular season games planned unless they again meet in a bowl game.

The Not So Obvious: If you have some Michigan friends and you want to give them a little jab, just remind them the Trojans have won the last 6-of-7 games from their rivals from Ann Arbor.