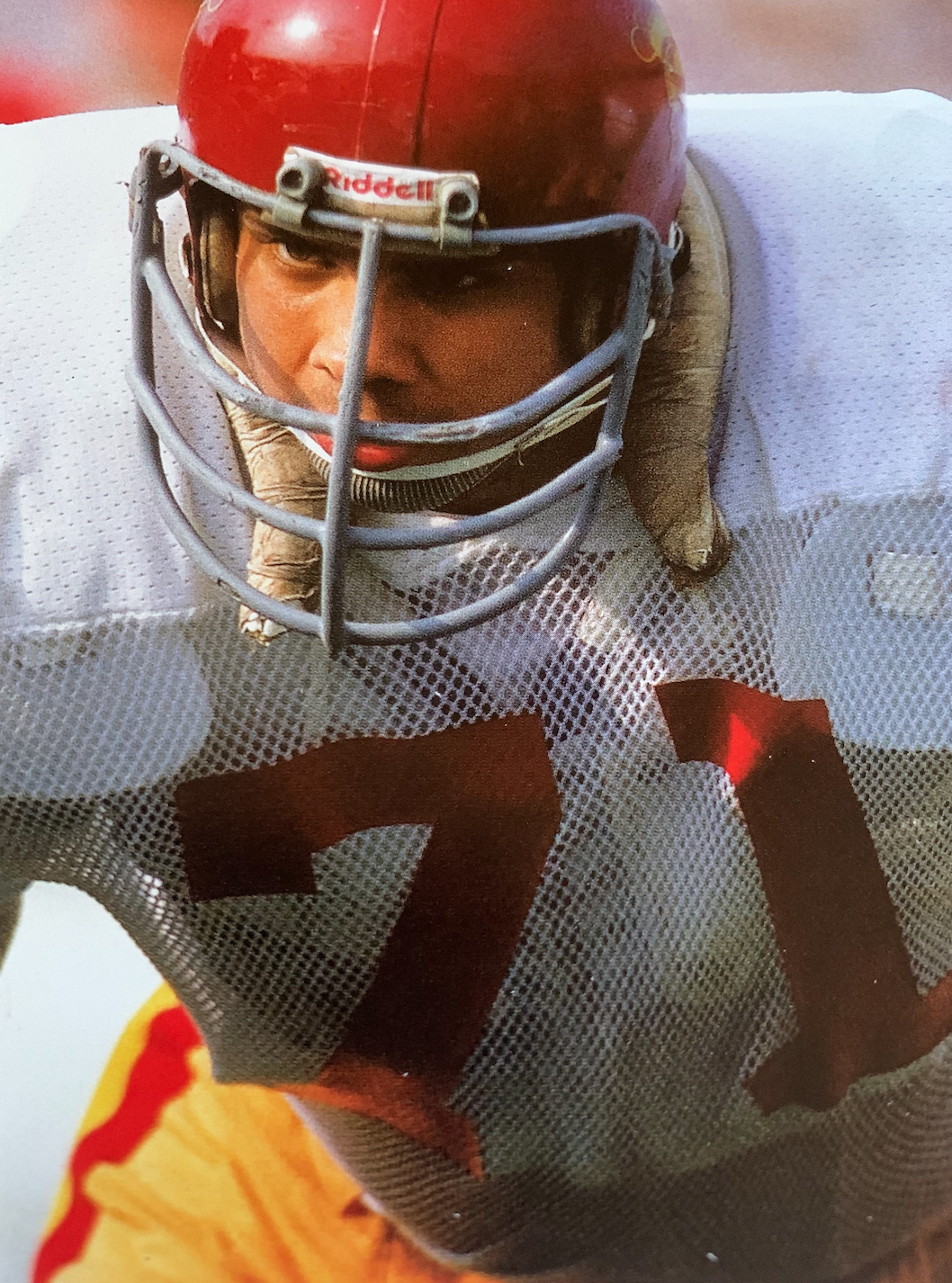 The Obvious: In the glorious history of USC football, each of the Trojans modern day national championship eras of John McKay, John Robinson, and Pete Carroll were anchored offensively with some of the biggest, baddest, and downright nastiest offensive linemen in captivity, such as former All-America guard Brad Budde (photo above). When those USC offensive lines got off the team bus in enemy territory in yesteryear, they not only passed the eyeball test, but opposing fans were ready to scream, “Hide the women and children!”

The Not So Obvious: Where we are today in terms of USC offensive lines and those during the national championship years is as different as the proverbial night and day. That’s not to say that the offensive line players during this Clay Helton era haven’t been giving their best effort because the Trojans can still crank out individual NFL first-round O-linemen such as tackles Austin Jackson and expected-to-be Alijah Vera-Tucker. It’s just a fact that the Trojans haven’t been able to accumulate enough O-line quantity of quality through both recruiting and the NCAA Portal. You can pick your own reasons for this recruiting deficiency.

The Obvious: The difference with the USC offensive linemen of today from the past is the caliber of athletes recruited and their size, the style of offense being run, and, of course, individual player development. Maybe with a new 2021 offensive line coach (Clay McGuire) and the relatively newly created Director of Football Sports Performance (Robert Stiner), things will begin to change. The first sign of change will be what is accomplished during this spring practice cycle and how it translates into fall practice and then into the regular season.

The Not So Obvious: Not that many of you need a refresher course on what a USC national championship offensive line looks like, but for those that don’t, allow the O/NSO to give a brief history lesson. For the Trojans to again challenge for a national title, the roadmap to resurrecting offensive line dominance is actually quite simple: Recruit big 4 and 5-star athletic linemen, win BIG, and repeat over and over again. And, of course, having a credible topflight O-line coach and head coach and a big winning program to seal the deal in a recruit’s living room is obviously a major component.

The Obvious: John McKay won his first national title back in 1962 and the size of that USC offensive line was not particularly overwhelming, but you know the old saying, “It’s not the size of the dog but the bite” and that 1962 team, especially along the O-line, had linemen that could really bite.

The Not So Obvious: What McKay learned and then swore after his 1966 club was pummeled by Notre Dame, 51-0, was that he would never let that type of bludgeoning happen again, and the coach went on a recruiting rampage to bring in the biggest and toughest hombres around from both the high school and junior college ranks, locally and nationally.

The Obvious: As the Trojans reached the 70’s, 80s, and the first decade of 2000, the USC offensive linemen in quantity of quality got more athletic, bigger, and better and better. No matter the decade beginning in the late 60s, future USC national champions would be led by offensive linemen that were either first or close to first in line for future NFL drafts.

The Not So Obvious: So, to truly understand how the Trojans’ offensive linemen literally took control of college football and national championships during the tenures of McKay, Robinson, and Carroll, below are all the national championship offensive lines and pay particular attention to the increase in size after 1962. Many of the names are legendary right through the Pete Carroll era.

The Obvious: In 1962, John McKay’s first USC National Championship team (11-0), the Trojans’ offensive line would seem rather diminutive compared to future standards, but they could really attack with aggression. Offensively, they averaged 23.7 points per game and defeated Wisconsin, 42-37, in the 1963 Rose Bowl Game.

Post All-Star and/or NFL recognition went to USC team captain and tough guy Marv Marinovich, who was taken in the 12th round of the NFL draft by the Los Angeles Rams, and in 1964, Gary Kirner, who was all-conference tackle in 1962, was selected in the fifth round of the AFL draft by the San Diego Chargers. FYI, Lubisich went on to become a pediatric dentist.

The Obvious: The 1967 National Champion Trojans (10-1-0) under McKay began to show a major increase in size along the offensive line. This O-line group was really tough and graduated two first-round NFL tackles. Offensively, they averaged 23.5 points per game and defeated Indiana, 14-3, in the 1968 Rose Bowl Game.

Post All-Star and/or NFL recognition went to two first-round offensive line draft pick tackles Ron Yary and Mike Taylor. Yary, the Trojans only Outland Trophy winner and No. 1 overall draft pick in 1968, was shortly followed by Mike Taylor, who was taken in the first round by the Chicago Bears as the 10th overall pick.

As seniors in 1968, tight end Bob Klein would be named all-conference and a first-round draft pick by the Rams in the 1969 draft along with tight end Bob Miller, who was selected in the sixth round by the New Orleans Saints.

The Obvious: The 1972 National Champion Trojans (12-0), arguably the greatest college football team of all-time, continued to dramatically increase in size and ability that when the O-line finished their business by contributing heavily to a 42-17 crushing of Ohio State’s defense in the 1973 Rose Bowl, there was little doubt that USC was not only Tailback U. but O-line U., as well. Offensively, they averaged 38.9 points per game and defeated Ohio State, 42-17, in the 1973 Rose Bowl Game.

Center Dave Brown, while not drafted, was named all-conference. FYI, Graf played briefly in the World Football League before deciding to enter the world of motion pictures as a successful stunt man and producer.

It should also be noted that tackles Steve Riley and Booker Brown would be 1973 consensus All-Americans, and both would be selected in the 1974 NFL draft. Riley would be a first round pick of the Minnesota Vikings and Brown a sixth round selection of the Houston Oilers.

The Obvious: The 1974 Trojans (10-1-1), John McKay’s fourth and final national championship team, featured another typical physically strong O-line unit. Four of those O-linemen eventually went on to the NFL. Offensively, they averaged 30.2 points per game and defeated Ohio State, 18-17, in the 1975 Rose Bowl Game.

Post All-Star and/or NFL recognition went to All-American offensive guard Bill Bain, who was drafted in the second round by the Green Bay Packers; All-America tight end Jim Obradovich was selected in the seventh round by the New York Giants; tackle Steve Knutson taken by the Atlanta Falcons in the 16th round; and center Bob McCaffrey, who was also selected in the 16th round by the Green Bay Packers. Sophomore tackle Marvin Powell was an all-conference selection. Powell would go on to become a two-time All-American in 1975 and 1976.

The Obvious: The Trojans 1978 National Champions (12-1) under head coach John Robinson, had a roster of offensive linemen that looked like an NFL expansion team. Offensively, they averaged 24.5 points per game and defeated Michigan, 17-10, in the 1979 Rose Bowl Game.

Post All-Star and/or NFL recognition went to All-America guard Pat Howell, a second-round draft pick by the Atlanta Falcons in the 1979 NFL draft. All- Conference guard Brad Budde, who would be a 1979 All-American and Lombardi Award winner, would eventually become a No. 1 draft pick of the Kansas City Chiefs in the 1980 draft along with all-conference tackle selection Anthony Munoz, who would be the No. 1 selection of the Cincinnati Bengals.

Tight end James Hunter would be eventually drafted after his 1980 senior season in the ninth round by the Pittsburgh Steelers while sophomore Keith Van Horne, who would become a 1980 All-American and two-time all-conference selection, would eventually be picked by the Chicago Bears in the first round of the 1981 NFL draft.

The Obvious: In 2003, the Trojans (12-1) attained their 10th national title under Pete Carroll, as Carroll returned the Men of Troy to a national dynasty, one for the ages. Offensively, they averaged 41.1 points per game and defeated Michigan, 28-14, in the 2004 Rose Bowl Game.

Post All-Star and/or NFL recognition included All-America tackle Jacob Rogers, taken by Dallas in the second round of the 2004 draft and center Norm Katnik, who was named all-conference. The 2006 NFL draft would feature tackle Winston Justice, who would become a second-round pick of the Philadelphia Eagles, guard Fred Matua, who would eventually become a seventh-round selection of the Detroit Lions, and tight end Dominique Byrd, who would be a third-round pick of the St. Louis Rams.

Tight end Gregg Guenther would eventually sign with the Tennessee Titans (2005). Guard Lenny Vandemade spent time on the 2004 Pittsburgh Steelers practice squad and on the Steeler’s injured reserve in 2005. A note: In 2020, Lenny Vandermade was a USC offensive quality control analyst and continues in the program for 2021.

The Obvious: The 2004 USC Trojans (11-0) won their second national championship of the Pete Carroll era and 11th National Championship overall, and again the cupboard was filled with future NFL offensive line performers. Offensively, they averaged 38.2 points per game and defeated Oklahoma, 55-19, in the 2005 Orange Bowl Game.

Post All-Star and/or NFL recognition: Because of their youth, there were no Trojans offensive linemen post-season honors or NFL draftees. However, the following season in 2005, All-America honors went to tackles Sam Baker and Deuce Lutui, while center Ryan Kalil was awarded all-conference honors. In the 2006 draft, Deuce Lutui was a second-round selection of the Arizona Cardinals, and in the same draft guard Fred Matua would be a seventh-round selection of the Detroit Lions.

In the 2007 draft, center Ryan Kalil would be taken in the second round by the Carolina Panthers, and in the 2008 draft, Sam Baker was a first-round pick of the Atlanta Falcons. Tight end(s) Alex Holmes would be signed by Miami (2005) while Dominique Byrd, a junior, would eventually be a third-round pick of the St. Louis Rams in the 2006 draft.

The Obvious: And finally, we know what kind of USC offensive line talent and coaching that is needed for a national championship team, but you also need to have a stout defensive line.

The Not So Obvious: Next Friday, the O/NSO will take a look at the defensive fronts of the national championship teams, again beginning with the John McKay era.