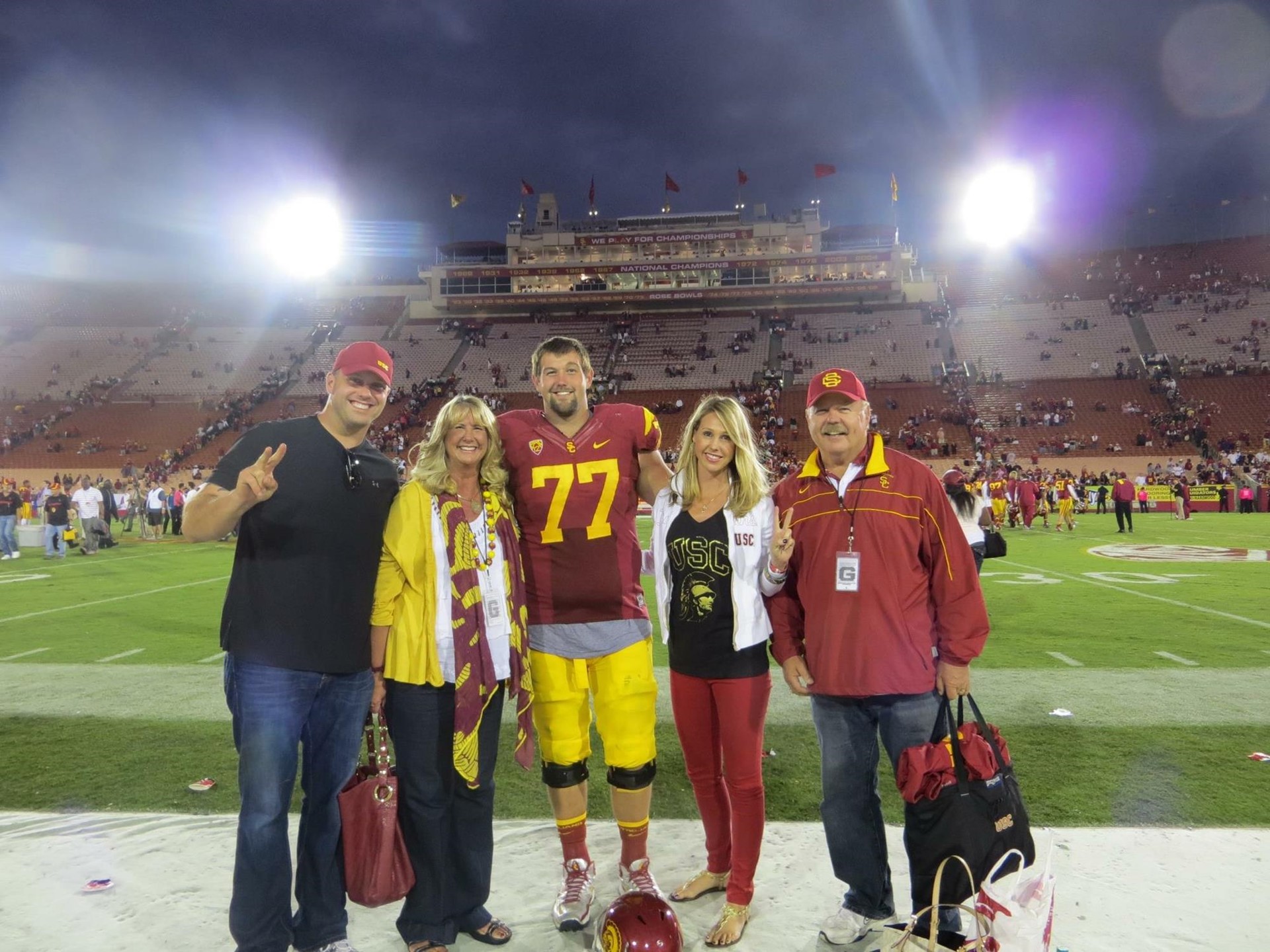 The Obvious: With the afterglow of the recent NFL draft still in the air, it’s a reminder of the unique father-son, grandfather-grandson, and even coaching legacies of USC Trojans football lore. We were reminded of these unique bloodline connections last Thursday when former Trojans offensive tackle Austin Jackson, the grandson of former Trojans offensive tackle Melvin Jackson, was drafted with the 18th pick in the first round by the Miami Dolphins.

The Not So Obvious: The family Jacksons are just part of past decades of cardinal and gold legacies, who have competed for the Men of Troy in football. Needless to say, when it comes to recruiting and looking for a built-in advantage over your competitors, there’s nothing better than the benefit of legacy. With that in mind, let’s take a look at some of those past cardinal and gold legacy connections, some famous and some not so famous, but Trojans gridders, nonetheless. Who says it’s not in the genes? For clarification, playing years in parentheses are considered letterman recognition as described in the 2019 USC Football Media Guide.

The Obvious: Former Trojans offensive linemen Derek (2002) and Kevin Graf (2010-2013) are part of a Trojans pigskin family that could be considered the first family of USC football. Derek was a valuable member of the Trojans as an offensive guard and started in the 2003 Orange Bowl while younger brother Kevin was a three-year starting offensive right tackle, who went on to the NFL.

The Not So Obvious: Derek and Kevin’s dad is Allan Graf (1970-72), who was a starting offensive guard on the 1972 national champions. A tough, physical offensive lineman, Allan was part of a sensational offensive line on a team that many arguably consider college football’s greatest team ever.

The Obvious: Tight end Jack Yary, a highly recruited prospect out of Murrieta (Calif.) Valley HS, is a bright spot for the incoming Trojan freshman Class of 2020.

The Not So Obvious: Jack is the son of the Trojans’ two-time All-America offensive tackle Ron Yary (1965-67), who is Troy’s only Outland Award Trophy winner (1967). Ron is in both the College and Pro Football Hall of Fames.

The Obvious: Current sophomore wide receiver John Jackson lll (2019 – present) will be competing for increased playing time should there be a 2020 season.

The Not So Obvious: Jackson is the son of former Trojans receiver great John “JJ” Jackson ll (1986-89), who was All-Conference his senior season.The late John Jackson Sr. (1976-81), the grandfather of John Jackson lll, was the Trojans’ offensive coordinator under the highly successful first cardinal and gold tour of former head coach John Robinson.

The Obvious: Former Trojan linebacker walk-ons Clay Mathews lll (2005-08) and safety Kyle Mathews (2003) were symbolic of hard work and determination during their time at Troy. Clay lll grew into a beast of a linebacker his final USC season and continues to have a remarkable NFL career while brother Kyle was an admired competitive walk-on. Both brothers arrived at USC when Pete Carroll’s roster was littered with former prep All-American.

The Not So Obvious: Clay and Kyle’s dad is legendary USC 1977 All-America linebacker Clay Mathews ll (1974-77), who was a starter on the 1974 national champions. If the Allan Graf family has some competition as the Trojans’ First Family of Football, it would be the Matthews clan.

The Obvious: Former Trojans’ all-star tackle Austin Jackson (2017-2019) was selected last week as the 18th pick in the first round of the NFL draft by the Miami Dolphins. Austin was the first USC offensive lineman to be selected in the first round since Matt Kalil in 2012.

The Not So Obvious: Austin’s grandfather is former Trojans’ offensive tackle Melvin Jackson (1974-75), who started on the Trojans’ 1974 national champions. Melvin went on to have a career in the NFL and the Green Bay Packers.

The Obvious: Former offensive lineman Nick Howell (2006-09) was a valuable contributor during his days at Troy as a guard and center.

The Not So Obvious: Nick’s dad is former 1978 consensus All-America offensive guard Pat Howell (1976-78), who was a key member of the Trojans 1978 national champions. Pat went on to have a successful NFL career.

The Obvious: Former Trojans quarterback Mike McDonald (2005-07) was a valuable contributor for some of Pete Carroll’s most successful teams.

The Not So Obvious: Mike’s dad is former Trojans 1979 All-America quarterback Paul McDonald (1976-1979), the starter on USC’s 1978 national champions. Paul went on to a solid career in the NFL with the Cleveland Browns and Dallas Cowboys.

The Obvious: Former H-back/fullback Rhett Ellison (2008-2011) was the epitome of hard work and dedication, who was rewarded with All-Pac-12 special teams recognition and later experienced a successful playing career in the NFL.

The Not So Obvious: Rhett’s dad is former Trojan linebacker Riki Gray-Ellison (1978-82), who was a decorated former high school All-American from Arizona who went on to anchor some of the most dominant USC defenses during that time period and later with the San Francisco 49’ers.

The Obvious: Former Trojans tight end Tyler Cashman (1993-95) was a member of the USC 1996 Rose Bowl team that played the Northwestern Wildcats.

The Not So Obvious: Tyler’s dad is former corner Pat Cashman (1966-67), who will forever be remembered by Trojans fans for his 55-yard touchdown interception of UCLA Heisman Trophy winning quarterback Gary Beban in the famous 1967 USC/UCLA game. Proudly, both father and son were members of winning Rose Bowl teams.

The Obvious: Former USC quarterback Todd Marinovich (1989-1990) became one of the most celebrated quarterbacks in Southern California prep history and continued his excellence as a successful starting USC quarterback.

The Not So Obvious: Todd is the son of former Trojans starting lineman Marv Marinovich (1959-1962), who started on the Trojans 1962 national champions. Marv, a co-captain on the 1962 champs, was also known for his physical and intense style of play.

The Not So Obvious: T.J. is the son of former Trojans’ All-America safety Tim McDonald (1983-86). They became the first father-son All-American first teamers and captains in USC history, and both did so as safeties.

The Obvious: Grant Moore (2014–2017) is a former walk-on USC linebacker who was considered an intense determined player. Grant certainly made his presence felt and eventually earned a scholarship before his final season. Grant came to Troy as a redshirt freshman inside linebacker, who was a highly competitive prospect coming out of powerhouse Santa Ana (Calif.) Mater Dei High.

The Not So Obvious: Grant is the son of former Trojans linebacker Rex Moore (1984-87), who was a four-year letterman linebacker at USC, leading the Trojans in tackles while earning team Most Inspirational Player praises in 1986.

The Obvious: Marvin Powell lll (1995-98) is a former Trojans fullback.

The Not So Obvious: Marvin lll is the son of former two-time USC All-America OT Marvin Powell (1974-76), who was an all-star starter on the Trojans’ 1974 national champions. Dad went on to a very accomplished career in the NFL after having been a first-round 1977 draft selection of the New York Jets.

The Not So Obvious: Taso and Petros are the sons of former USC linebacker John Papadakis (1970-71), who was considered a very smart football player and played with a real aggressive streak and emotional drive.

The Not So Obvious: Lofa is the son of late Trojans fullback Mosi Tatupu (1974-77), a blockbusting fullback who led the way for a number of star-studded USC tailbacks. Mosi went on to the NFL’s New England Patriots and made the 1986 Pro Bowl for his special teams play.

The Obvious: Wide receiver John “JK” McKay (1972-74) was a prolific USC receiver, who was on two national championship teams (1972 and 1974) and will always be remembered for his 38-yard touchdown reception in the fourth quarter against Ohio State, helping position the Trojans for a 1975 Rose Bowl victory over the Buckeyes.

The Obvious:  Safety CJ Pollard (2017-2019) has been an active reserve during his Trojans career but elected after the 2019 season to place his name in the NCAA Transfer Portal.

The Not So Obvious: Brennan’s dad is former USC head coach Pete Carroll (2001-09), who is in the conversation as perhaps the greatest coach in USC history, a certain future College Football Hall of Fame selection.

The Not So Obvious: Lane’s dad is Monte Kiffin (2010-12), who became defensive coordinator for the Trojans and worked under his son.

The Obvious: David Robinson (1993-97) is a former tight ends coach for the Trojans.

The Not So Obvious: David is the son of College Football Hall of Fame and former Trojans head coach John Robinson (1976-82, 1993-97). Dad hired his son during J-Rob’s second time around as the Trojans head football coach.

The Obvious: And finally, there are many funny USC recruiting stories in the annals of Trojan football.

The Not So Obvious: One legendary story was when head coach John McKay was asked about recruiting his son, JK McKay, and quipped, “I had an advantage, I slept with his mother.”