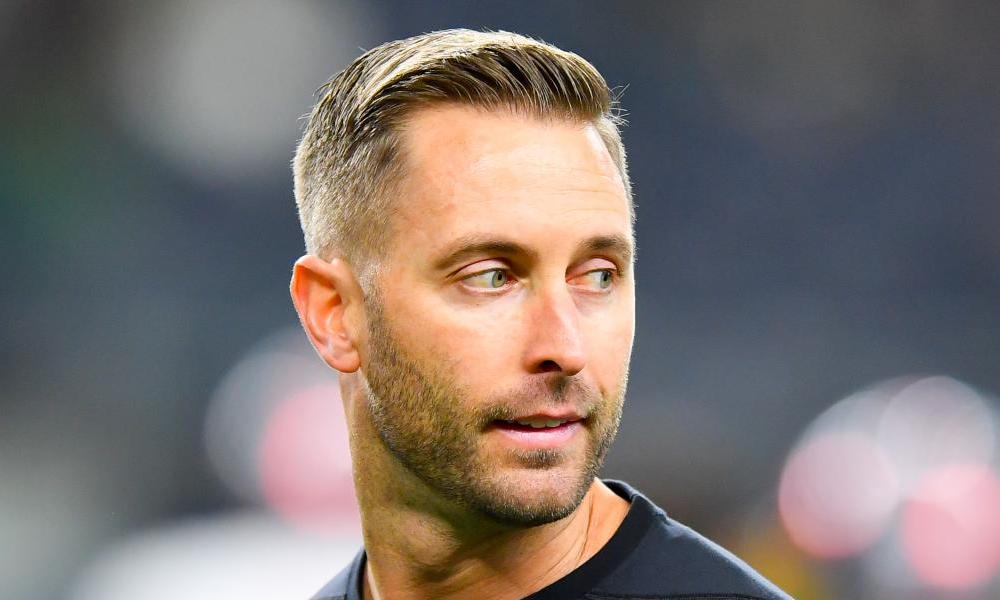 The Obvious: It was a real Kliff hanger the first time around when Trojans athletic director Lynn Swann and head coach Clay Helton successfully pursued, hired, and inked fired Texas Tech head coach Kliff Kingsbury (photo above) as the new USC offensive coordinator and quarterback coach. After a highly positive local and national media blitz upon his signing with Troy, the ink had hardly dried when it was confirmed this week that Kingsbury would be interviewing for the head coaching positions of the New York Jets and Arizona Cardinals, and there could be other NFL opportunities.

The Not So Obvious: Now, before overreacting or underreacting to Kingsbury reopening his or the NFL’s attraction for each other, the O/NSO thought we’d get right to the heart of the matter. Kingsbury could end all the drama, speculation, and suspense if he wanted by just coming out and saying he’ll be the OC for the Trojans 2019 season – end of story – period. Of course, Kingsbury has not. If the trumpeted savior of USC offensive football decides to forego the Trojans for greener pastures and “professional growth,” there won’t be enough towels – fair or unfair – to wipe off all the verbiage that will be hurled at Lynn Swann and Clay Helton and even Kingsbury himself. The question that will be replayed over and over: How did we get to this point in the first place? The answer: Like it or not, the day Swann announced he was bringing back Helton despite the enormous outcry to the contrary, it left open the remote possibility for a cardinal and gold theatre of the absurd, and right now that seems to be where we’re at – a cardinal and gold theatre of the absurd.

The Obvious: Objectively, Lynn Swann and Clay Helton did their job by pursuing and signing Kliff Kingsbury as the Trojans new OC, but what has happened with Kingsbury and/or his agent that has initiated further interest in the NFL?

The Not So Obvious: There’s the old saying “never quit a current job unless you have another one lined up,” and USC is Kingsbury’s current job albeit for just a few weeks. As the O/NSO sees it, something has taken place that pushed Kingsbury to reopen his future coaching destination. Kingsbury will do what Kingsbury needs to do in his own self-interest, but what the Trojans’ program needs now more than ever is stability and not uncertainty. Reliability and not ambition. Continuity and not discontinuity.  Despite all the good intentions by Swann and Helton, is the Trojans’ football program being played by a former head coach who signed a contract but seems to have no problem looking at bigger apples and has apparently justified it for reasons unknown?

The Obvious: Trojans athletic director Lynn Swann and head coach Clay Helton said at the conclusion of last season that they had a 2019 plan to rejuvenate the Trojans’ program in many areas.

The Not So Obvious: During the offensive coordinator interviewing process, Helton said that Kliff Kingsbury was his No. 1 choice to be the Trojans offensive coordinator to the extent that Gentleman Clay was willing to give Kingsbury complete control of his offense in scheme, play-calling, and quarterback coaching. Given the current situation, wouldn’t curious minds want to know who the backup choice was if Kingsbury hadn’t originally worked out? We may soon find out.

The Obvious: Sam Darnold is the starting quarterback for the New York Jets.

The Not So Obvious: Ya think that Sam might be rooting for Kliff Kingsbury to bring his system and coaching to The Big Apple? Actually, the O/NSO would not be overly shocked if Kingsbury was given strong consideration for the job since so much of the Jets’ future is based around their offense.

The Obvious: For remaining offensive recruits and committed players for the Class of 2019, the Kliff Kingsbury rumors could have both a short and longtime effect.

The Not So Obvious: There are a number of upcoming post-season prep all-star game in which some extremely coveted Trojan recruits on the offensive side of the football will soon make their national announcements on television.

The Obvious: The All-America Bowl from San Antonio, Texas, which features a number of committed and uncommitted 2019 recruits, will be played on Saturday (10 a.m. PST/NBC), and there’s expected to be some announcements regarding some specific USC recruits.

The Not So Obvious: The All-America Bowl, which was formerly known as the U.S. Army All-America Game, features at least two major USC offensive 2019 recruits, and you know their names – WRs Bru McCoy (Santa Ana, Calif./Mater Dei) and Kyle Ford (Orange, Calif./Lutheran), both of whom are expected to announce their respective choices sometime during Saturday’s NBC telecast. The original betting line was that both McCoy and Ford would announce for the Trojans, but with the Kingsbury news, who knows what hat both players will put on when it’s their time. McCoy will select between the Trojans and Texas.

The Not So Obvious: So, the Texas Longhorns – a team the Trojans were up 14-0 at one point during the first quarter of their early September matchup in Austin, and then blitzed the Men of Troy the rest of the way by a final 37-14 score – look to have taken a giant step this season in returning to its storied past. Texas finished this season 10-4. Somehow, the O/NSO doesn’t think UT head coach Tom Herman’s program is going to slide backwards in 2019.

The Obvious: In his last game as a head coach, Urban Meyer’s Ohio State Buckeyes repels Washington, 28-23, in the 2019 Rose Bowl.

The Not So Obvious: A number of Trojan fans have expressed hope that one day Meyer will reconsider coaching again and maybe don the cardinal and gold position. However, there will be no coaching again if Meyer’s wife has her way. After the Rose Bowl, Shelley Meyers said, “I would be ecstatic if he didn’t (coach again). I’m done. I want him to be done. He’s too intense. It’s an end to something that we’ve been doing for a long, long, long time. I’m sad, but I’m really happy for him, because this is what needed to happen right now. He’s been fun again. He’s back to the Urban I knew when he wasn’t so stressed out and anxious and having headaches.”

The Obvious: And finally, the Pac-12 finishes this bowl season at 3-4.

The Not So Obvious: The winners included Washington State, Stanford, and Oregon. The losers were Washington, Cal, ASU, and Utah. Of course, Stanford and Oregon won by one point while Washington State was a two-point winner. With the previous bowl season’s 1-8 record and this season’s 3-4 record, the Pac-12 is 4-12 the past two post-seasons combined. Well, at least there was s-o-m-e progress.