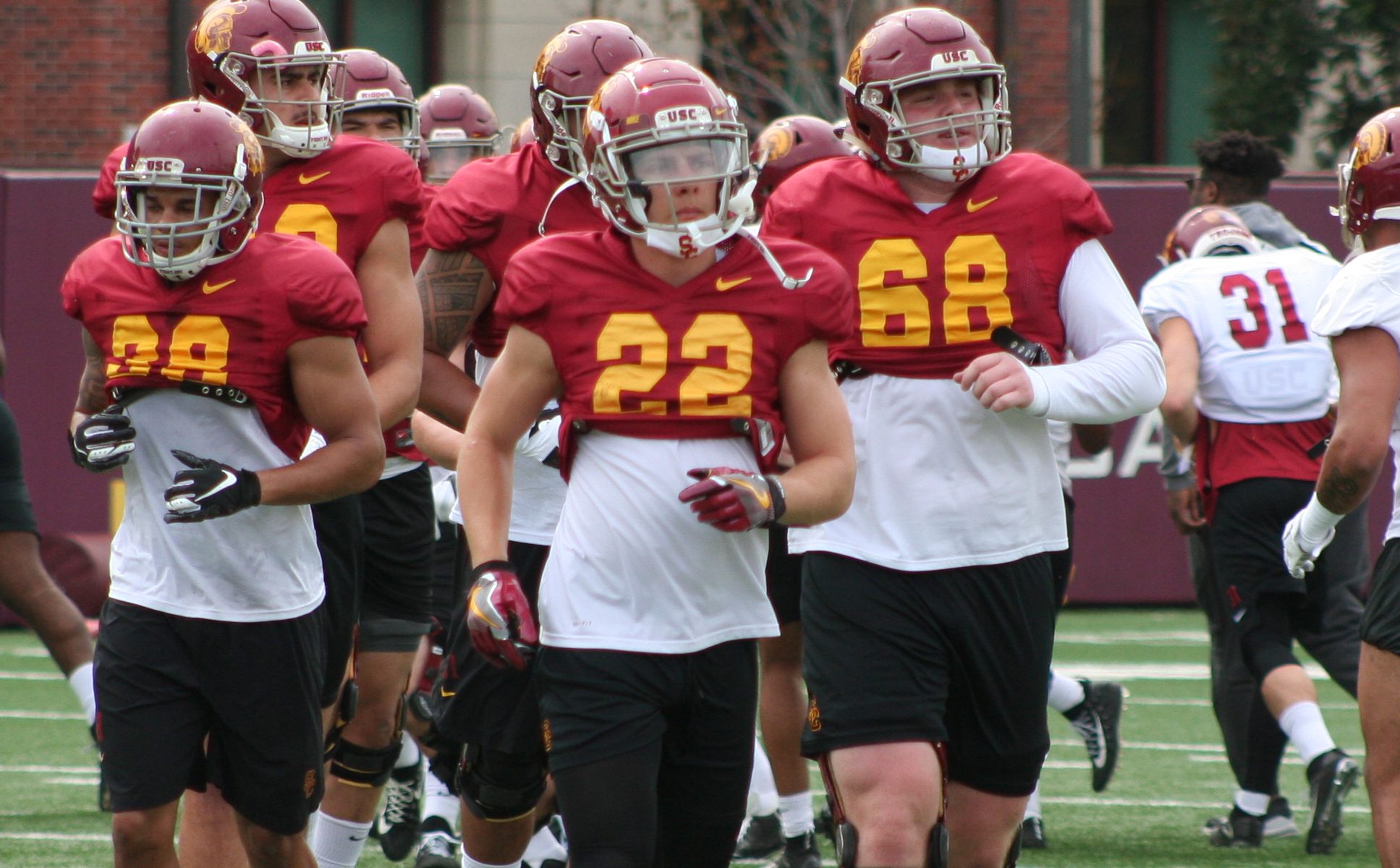 The Obvious: The first full week of training camp has almost been completed, and now with full pads on, the hitting is well underway, this week’s “collisions” will be capped off on Saturday afternoon on Howard Jones/Brian Kennedy Fields with the first of three probable scrimmages.

The Not So Obvious: Scrimmage No. 1 should give players, coaches, media, and invited guests a chance to not only see what the quartet of competing quarterbacks can do but evaluate the other position battles, as well. Clay Helton has correctly said that as much as he sees in practices, it’s all about performing when “the bullets are flying,” and those bullets should be flying on Saturday. Although the practice and scrimmage are closed to the general public, there figures to be enough information disseminated through the media that one can begin to form some sort of rudimentary opinions.

The Not So Obvious: Talk to conspiracy theorist and sophomore JT Daniels is already the Trojans’ quarterback in the mind of head coach Clay Helton. Talk to idealists, and it’s still an open competition. Here’s hoping that no matter who wins the quarterback competition, that performer will have been the clear-cut winner, and that everybody on the team can support the starter. If anybody knows at the conclusion of training camp who the starter should be, it’ll be the team members.

The Obvious: Many fans and media have wondered aloud whether Clay Helton and Graham Harrell will wait to the very end of training camp to name a starting quarterback.

The Not So Obvious: When asked if the Trojans would wait until the Friday before the Fresno State game to name a starting quarterback, quarterback coach Graham Harrell said, “I don’t think you can go that far, but we’ll let them compete for a while. You do have to get closer to that point (Fresno State), so you know who gives you the best chance to win.” After Thursday’s practice, Clay Helton indicated the QB decision will come sometime after next Saturday’s second scrimmage, Aug. 17, in the Coliseum, which will be open to the general public.

The Obvious: Clay Helton said that Saturday’s scrimmage is of the upmost importance for both his four quarterbacks and the team.

The Not So Obvious: Regarding Saturday’s scrimmage, Helton was asked about this weekend’s importance and the coach said, “Extremely important. We factor in everything as we’re breaking down our stats, from one-on-one, to [skeleton], to, really the team periods mean the most to us because that’s when the bullets fly and that’s when pressures come, coverage recognition. It’s very important to see them in those live atmospheres. So both this Saturday and next Saturday are critical for us for evaluation.”

The Obvious: One of the criticisms of sophomore quarterback JT Daniels has been his perceived lack of leadership skills.

The Not So Obvious: According to Graham Harrell, “More than anything, he (JT) probably had the most room to improve as far as becoming a leader, but he’s probably taken the biggest steps in those aspects cause he had room to improve, you know what I am saying. That’s what we told him the most coming out of spring, being a leader, getting that unit going, and having opportunities to lead this summer. He’s done a nice job out here, and he has developed the most from the summer to now.”

The Obvious: Even before this mid-week’s full pads, the Trojans suffered a loss with the injury to starting senior inside linebacker Jordan Iosefa, who suffered a dislocated kneecap with cartilage damage during practice on Monday yesterday. The good news is that it was not an ACL injury. The recovery timetable is four to six weeks.

The Not So Obvious: Certainly, a tough break for the senior from Waipahu, Hawaii (St. Louis HS), but the good news was that the injury was suffered so early in training camp that he theoretically could return in time for at least the second half of the season. Jordan was expected to backup MIKE starter John Houston Jr. and WILL starter Palaie Gaoteote. Now it’s next man up and that man could be true freshman Ralen Goforth, who has really excited the coaching staff or perhaps another Hawaiian in sophomore Kana’i Mauga, a real headhunter and former Hawaii Defensive Player of the Year out of Waianae.

The Obvious: The Trojans have a long history of great players from the state of Hawaii.

The Obvious: It is always advantageous for a true freshman to enroll early and participate in spring practice.

The Not So Obvious: Case in point is true freshman inside linebacker Ralen Goforth, who used that spring practice experience to improve his status and has carried a fine spring into a training camp in which he continues to impress. Another potential good one from Bellflower (Calif.) St. John Bosco, there are some who believe that Ralen will be a better football player when it’s all said and done than his UCLA brother, Randall.

The Obvious: A Trojan defender in training camp that continues to impress is true freshman defensive end Drake Jackson.

The Not So Obvious: The O/NSO asked Drake where he is today in his progress as a player compared to last spring. Drake replied, “I just want to be an all-around player – pass rusher, stop the run – working on all aspects. I am really comfortable now with the playbook. Having come in the spring, I feel with the kids coming in now I am way ahead in the playbook.”

The Not So Obvious: Asked about the progress of Drake Jackson, Coach K said, “The other big surprise has been Drake Jackson. That guy is a good player, you know. He’ s still got a lot of work to do, so let’s not just put him on that pedestal right yet. He’s got the tools to get there, and we got to get him there sooner rather than later.”

The Obvious: The Trojans have been impressed with their freshmen wide receivers recruiting class.

The Not So Obvious: Not to get into too much hyperbole, but this freshman receiving class consisting of Drake London, Munir McClain, Kyle Ford, and Bru McCoy could – as a group – be the best in recent memory and that’s saying something. While McCoy has been out with illness, London and McClain have really flashed in the beginning of training camp. What really makes this group different than other freshmen classes is the sure size of the receivers. There are no flyweights out there.

The Obvious: There are always surprises in training camp from the freshmen, and one of those surprises has been true freshman receiver Munir McClain from San Juan Capistrano (Calif.) JSerra.

The Not So Obvious: One of those impressed is offensive coordinator Graham Harrell. Assessing the early going with McClain, Harrell said, “Munir has been excellent. To be honest with you, I thought he’d be a little more raw than he is coming out. He’s been a pleasant surprise for us as far along as he is, the plays he’s making.”

The Obvious: Most pundits have been concerned about the experience of the Trojans’ secondary.

The Not So Obvious: First-year Trojans secondary coach Greg Burns has drawn raves regarding how this talented but inexperienced group has progressed in the early going. We all know you can’t coach experience, but you can coach technique and discipline, and it appears that Burns is getting the best out of this group thus far.

The Obvious: Much was made over the transfer of true freshman corner Chris Steele, who originally signed with Florida and participated in Gators’ spring ball before eventually transferring to USC.

The Not So Obvious: Asked about how Steele might have benefited from spring ball in Florida, Greg Burns said, “I would assume (what we’re doing) is not new to him and that’s the biggest thing. He’s already been on the stage per say, so he comes in with a different comfort level. Aside from that, he still has to learn a new system, so that put him in the classification with all the other guys. From a confidence standpoint, he’s competing against our receivers. For an example, he would probably step in a lot more comfortable and be ready to challenge instead of being a true freshman going against these type of receivers”

The Obvious: One of the better rules the NCAA has passed in recent times is the one which allows players to perform in four games during a season and not lose a redshirt year.

The Not So Obvious: One Trojans who appears to have taken advantage of the new NCAA redshirt ruling is junior defensive lineman Connor Murphy, who many feel has enough potential to be a real contributor in 2019. So far in training camp, Connor’s performance, under new defensive line coach Chad Kauha’aha’a,has been well received and also recognized by Clay Helton.

The Obvious: Thus far, redshirt freshman inside linebacker Solomon Tuliaupupu has not been physically able to perform in training camp due to a recovering from foot surgery back in 2018.

The Not So Obvious: Coming out of Santa Ana (Calif.) Mater Dei, Tuliaupupu was considered by many the top high school linebacker in the country in 2017, even winning the 2017 High School Butkus Award as the nation’s top prep linebacker. However, foot surgery from a year ago has been slow to heal, and one wonders when “Solo” will again be able to perform? Observers at practice believe that when healthy, the 6-foot-3, 240-pounder will be as good as any backer out there.

The Obvious: The Trojans have been spending a lot of time working on special teams this training camp.

The Not So Obvious: There is nothing exciting watching a chunk of time (20-25 minutes) being addressed to coach John Baxter’s special teams. It’s a matter of philosophy, but nobody complains when the Trojans block a punt, which Baxter’s units over previous seasons have become quite proficient.

The Obvious: And finally, as you’re aware, there seems to be a million “Watch Lists” nominations in the preseason season for post-season awards.