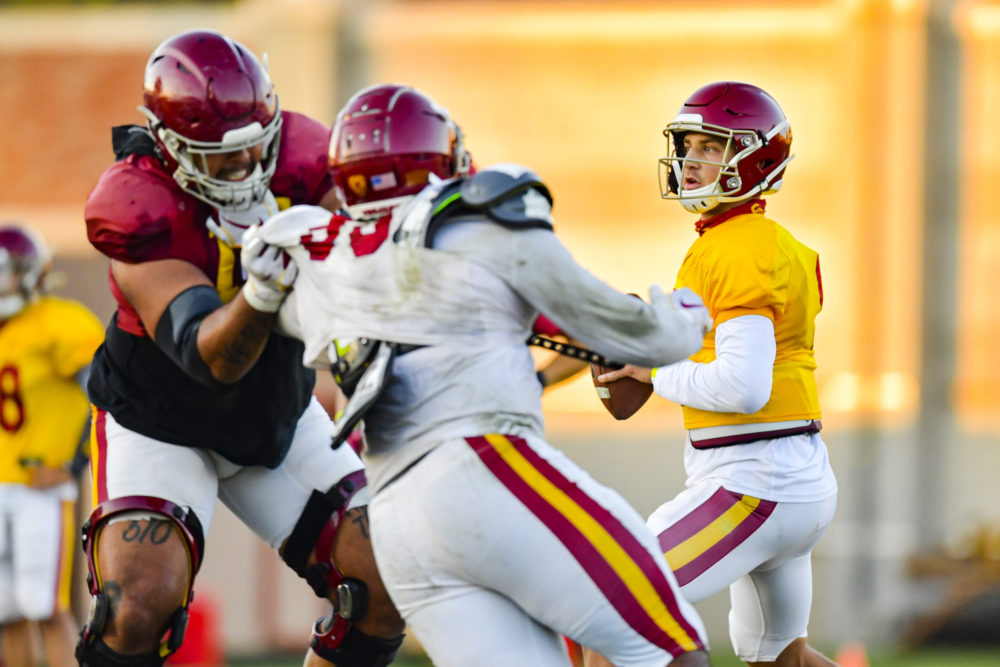 The Obvious: The No. 25 USC Trojans head into this weekend for the first of three consecutive Saturday morning scrimmages in the Coliseum, all in preparation for their Saturday, Nov. 7, season opener with the visiting Arizona State Sun Devils and that dreaded 9 a.m. PDT kickoff.

The Not So Obvious: In reality, the Trojans are already holding practice scrimmages, according to head coach Clay Helton. The good news is that Gentleman Clay has been already impressed with the tackling on defense of his secondary and linebacker units. More good news is that with the full-go hitting sessions, there have been no major injuries aside from the usual bumps and bruises. However, you can bet that once the Trojans enter the friendly confines of the Coliseum, the juices will be flowing at another physical level.

The Not So Obvious: There are obvious personality differences between Todd Orlando and last season’s DC Clancy Pendergast. Orlando is intense and Pendergast was not – at least publicly. Orlando coaches with his hair on fire and Pendergast did not. Orlando portrays what you’d expect of a DC and a linebacker coach, and Pendergast, who was a secondary position coach, did not. It’s a matter of style, and it’s also a matter of credibility.

The Obvious: Defensive coordinator Todd Orlando places a great deal of emphasis on players’ attitudes, desires, and love of the game.

The Not So Obvious: Orlando said of this week’s full pads and Saturday’s scrimmage, “This is your resume to show that you’re going to run as hard as you can for your teammates, and you’re going to hit somebody. And if you’re not, you’ll be on the sidelines with us.” Expect the Trojans’ defensive attitude to emulate its defensive coordinator, which will be a refreshing change from previous seasons. One would also expect a more violent but disciplined defense.

The Obvious: One of the keys to any successful team or position unit is personal accountability.

The Not So Obvious: Todd Orlando believes that his defensive unit as a whole is very talented. However, the coach says he places a lot of emphasis in deciding who plays and who sits by asking the players one simple question: “How much do you care?”

The Obvious: Another likely topic of observation on Saturday is how physical the Trojans will be in these scrimmages leading up to the ASU opener.

The Not So Obvious: This week, Todd Orlando said something that pertains to being physical. The coach said, “The beauty of this game is contact.” He added that running hard to the ball and hitting people is what it’s all about. Something tells the O/NSO that this season’s defense will show an upgrade in desire to run hard on every down and given the opportunity, they will try and knock your jock off. It would appear that Orlando has challenged his defense to hear the call.

The Obvious: So, it would appear there is a major effort to instill a higher level of physicality on defense.

The Not So Obvious: Will the offense follow the lead of the defense in terms of physicality? Honestly, we’ve heard it all before. When there has been a question of what physicality really is, all you need to do is harkin back through the past four seasons when the Trojans have played the likes of Alabama, Ohio State, Notre Dame, and, yes, even Iowa. You don’t have to be Nick Saban to see the physical discrepancies between the aforementioned teams and Trojans. Coaches like to use the old saying of “are you the hammer or are you the nail?” Playing power teams, the Men of Troy, unfortunately, have been the nail.

The Obvious: The Trojans are looking to replace All-Pac-12 defensive tackle Jay Tufele, who has elected to forego the fall season to prepare for next spring’s NFL draft.

The Not So Obvious: Right now, the main candidate to replace Tufele is senior Brandon Pili (6-4, 325). Asked about the loss of Tufele, Pili said, “He left a big void on our defensive line. I have to be more accountable to my teammates.”

The Obvious: It figures that junior Palaie Gaoteote IV (6-2, 250) will man one of the starting inside linebacking positions when the season opens.

The Not So Obvious: It should be noted that Clay Helton believes strongly that new defensive coordinator Todd Orlando has had a major positive effect on Palaie because Orlando, according to Helton, has been “hard” on the Trojans physically gift linebacker, who hails from Las Vegas. This is good news for the Trojans because in the past, there has been the perception that Gaoteote was not a fundamentally sound linebacker or as fundamental as he should be. Helton was emphatic this week that he’s been so impressed with the relationship between his gifted linebacker and the new defensive coordinator. Helton said, “Todd has been hard on him becoming a better fundamental player.”

The Not So Obvious: Heading into the first scrimmage, the main contenders for the inside linebacker spot opposite Gaoteote are junior Kana’i Mauga (6-2, 245) and sophomore Ralen Goforth (6-2, 235). Both are very talented players capable of filling the void. Looking at his three main inside linebackers, Todd Orlando said, “All three are extremely sharp kids. They’re all going to play.”

The Obvious: On offense, the Trojans have a very talented stable of returning wide receivers, arguably the best in the Pac-12.

The Not So Obvious: While much attention is being paid to talented senior Tyler Vaughns (6-2, 190) and equally talented junior Amon-Ra St. Brown (6-1, 195), they may not be the most feared receivers on this elite unit. The most feared receiver is probably athletic sophomore Drake London (6-5, 210), the physical specimen out of Moorpark (Ca.) High. Regarding London, Trojans’ OC Graham Harrell says that Drake is “as talented a player as I’ve ever been around. If we’re going to win at a level we think we can, he’s going to play a large role in that.”

The Obvious: Despite the “obvious” wealth of offensive skill talent, all eyes will be focused Saturday on the Trojans’ rebuilt and work-in-progress offensive line.

The Not So Obvious: More than a few eyebrows were raised this past week when second-year OC Graham Carroll proclaimed to the media that “we feel good where we’re at right now with the return of Alijah Vera-Tucker. We have a good unit. If they stay healthy, I feel really really great where we are. It will be hard to stop us (on offense). They (the O-line) do a great job of protect but also run (block) the ball really well. They allow us to run the ball at a really effective rate.” It shows you what the return of Alijah Vera-Tucker can do to a coach’s confidence.

The Obvious: Clay Helton kind of let the cat out of the offensive line depth chart bag when he said the “1s” consisted of tackles Alijah Vera-Tucker and Jalen McKenzie, guards Andrew Vorhees and Liam Jimmons, and center Brett Neilon.

The Obvious: As usual or should we say recent tradition, the question of an effective running game remains front and center.

The Not So Obvious: A question for the running game belongs to the commitment of it by offensive coordinator Graham Harrell, although the young coach says he expects the offense line to be able to knock people off the line of scrimmage. Like they say, “You can’t begin to run the ball if you don’t call running plays.”

The Obvious: It is hoped that the first scrimmage on Saturday will continue to sort out the effectiveness and depth chart of a stable full of running backs.

The Not So Obvious: If the media were allowed to attend Saturday’s scrimmage, the O/NSO would be focused on sophomore back Markese Stepp and the question of his lateral quickness to change direction after last season’s unfortunate ankle injury. With the Trojans experimenting with a two-back set in practice, it would seem to make sense to see backfields consisting of some sort of combinations of senior Stephen Carr (6-0, 215) and Markese Stepp (6-0, 235) and/or senior Vavae Malepeai (6-0, 220) and sophomore Kenan Christon (5-10, 185).

The Not So Obvious: Jaxson commands the No. 1 prep team (9-0) in Utah and reminds the O/NSO somewhat of Sam Darnold. We watched Dart’s game against American Fork – Canyon Corner routed ranked American Fork, 59-28, on Wednesday night, and at one point Dart appeared to viewers during a break in the action and reminded them what channel they were watching the game. The kid has that Hollywood long hair and movie star looks. In other words, he’d fit in nicely with the cardinal and gold. BYU is a main competitor for Dart’s services. FYI, the kid is also an outstanding baseball player.

The Obvious: Former Trojans’ head coach Steve Sarkisian, currently the offensive coordinator for Alabama, will be the acting head coach on Saturday against Georgia due to the announcement that legendary Crimson Tide head coach Nick Saban has tested positive for COVID-19.

The Not So Obvious: When you think about it, “former” Trojans have made themselves mighty visible in the SEC if you think of Lane Kiffin at Mississippi, Ed Orgeron at LSU, and quarterback JT Daniels at Georgia, although JT is still waiting to see action.

The Obvious: And finally, Steve Sarkisian was the head coach at USC from 2014 till his dismissal in 2015.

The Not So Obvious: Even though he is the temporary man in charge of Alabama on Saturday against Georgia, how many coaches can say they directed both USC and Alabama in their career?