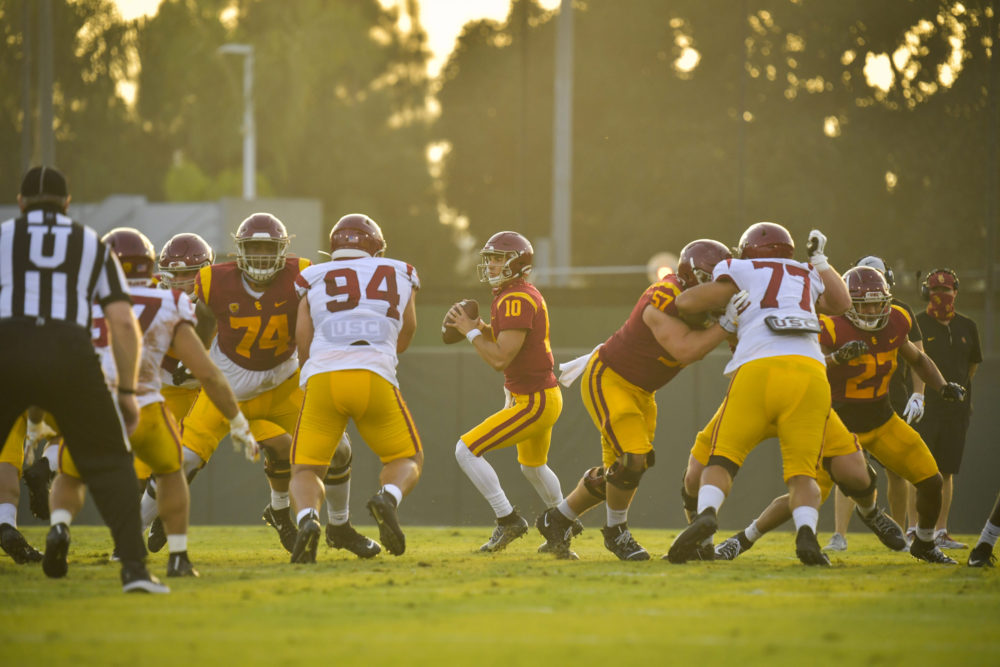 The Obvious: Two weeks from Saturday, the No. 24 USC Trojans (0-0 overall/0-0 Pac-12 South) will open the 2020 season – albeit a couple of months late – against the unranked Arizona State Sun Devils in the Los Angeles Memorial Coliseum at 9 a.m.

The Not So Obvious: When Clay Helton calls this week “Hell Week”, he means daily full pads and physicality the last four days. To complete this week’s physical combat, there’s a Friday night practice in the Coliseum followed by an early Saturday morning revisit to the Grand Old Lady for an anticipated 75-play scrimmage, probably the most important scrimmage of training camp due to the fact that the final scrimmage next Saturday will be a week before the ASU game and figures to emphasize more game-like organization and protocol.

The Obvious: One Trojan who has received rave reviews thus far in training camp is senior running back Stephen Carr, the former prep All-American from Fontana (Calif.) Summitt HS.

The Not So Obvious: It appears that after a long and sometimes frustrating USC career, Stephen (6-0, 215) is back physically and mentally and appears headed for a strong senior season. Many have forgotten the results of his 2017 freshman season when he made an instant impression as a backup first-year tailback and was named All-Pac-12 honorable mention. Clay Helton says Stephen is having his best training camp yet with emphasis of Carr’s running through people. Below is a video reminder of No. 7’s impressive healthy freshman season.

The Not So Obvious: Asked this week about what he wants to see in his backs as a group, Jinks says he wants his backs to be “one-cut” runners and to be violent. Hmm, sounds like old-school USC I-formation tailbacks, so help me Mike Garrett, OJ Simpson, Clarence Davis, Anthony Davis, Ricky Bell, Charles White, Marcus Allen, so you get the picture.

The Obvious: Clay Helton has been pleased with the play thus far of his offensive line, although the coach was concerned with the amount of holding penalties in the first scrimmage.

The Not So Obvious: No getting around it, the last several seasons the Trojans have been consistently undisciplined, and each season Gentleman Clay has promised to clean it all up. The coach has said in the past that discipline is the area he is holding himself accountable. As for last Saturday’s scrimmage, since the media was not there to watch, the holding could have come from an experienced lineman, a young freshman lineman, a receiver, etc. You get the picture.

The Not So Obvious: McKenzie (6-5, 315) would replace departed graduate student Drew Richmond, and how quickly Jalen adjusts long-term to his new position will have a lot to say regarding the offensive line’s ability to protect Kedon Slovis – not to mention a productive running game. The good news is that USC O-line coach Tim Drevno is always mixing and matching his linemen, so it’s safe to say that since McKenzie went through last season at both right guard and tackle, the transition may not be all that difficult.

The Obvious: Trojans second-year quarterback Kedon Slovis has received a lot of preseason hyperbole, which includes being a candidate for the Heisman Trophy.

The Not So Obvious: Thus far, Clay Helton really likes what he sees from his sophomore quarterback. According to Helton, Kedon now knows when to throw a ball away and live for the next play without hurting the offense. The coach feels his young signal caller has gained “mastery” of situational positions on the field, which includes the 2-minute offense. If Slovis can stay healthy for this modified season, the Trojans could be a passing game monster.

The Obvious: The Trojans are looking to fill the open inside linebacker position opposite of junior Palaie Gaoteote lV, who according to Clay Helton, is playing his best ball yet.

The Not So Obvious: With inside linebacker candidate Kana’i Mauga hindered by a hamstring issue, sophomore Ralen Goforth (6-2, 235) has emerged as a strong candidate to be opposite Gaoteote when the Trojans face ASU. Ralen shined as a freshman, and there is no reason to believe that he won’t end up the starter, especially if Mauga remains hobbled with his “hammy.”

The Obvious: An area to keep an eye on for Scrimmage No. 2 will be the play of the Trojans’ corners.

The Not So Obvious: Clay Helton was complimentary regarding the energy of junior Olaijah Griffin, but the corners as a whole gave up too many one-on-one battles with the Trojans’ wide receivers in the first scrimmage. The improvement of the corners leading into the ASU game will be critical because the Sun Devils will be bringing super sophomore quarterback Jayden Daniels to the Coli, and he is one of the nation’s most dynamic talents. Daniels is an extremely gifted mobile quarterback, and he could get the Trojans’ corners on a string. For the record, the Sun Devils also have a talented group of returning wide receivers.

The Obvious: The Trojans are ranked No. 24 in the country this week by the Associated Press.

The Obvious: Clay Helton has been under a lot of heat, having gone 13-12 the last two seasons.

The Not So Obvious: For the record, the Trojans have won 33 of its last 48 games.

The Obvious: In last Saturday’s scrimmage, Clay Helton said he was pleased with his defensive line.

The Not So Obvious: A key member for the D-line is senior Brandon Pili (6-4, 325), who has a lot of reasons to be motivated for this season. First, Brandon will be replacing All-Pac-12 defensive tackle Jay Tufele, who elected not to participate this season and will ready himself for the 2021 NFL spring draft. According to Pili, he feels he has an obligation to his teammates to perform at a high level. And lastly, if Pili, the native of Anchorage, Alaska, truly wants to play in the NFL, this is his opportunity to strut his stuff.

The Obvious: Fourteen Trojans already earned their bachelor’s degrees, and each wears a “Graduate” patch on their jersey.

The Obvious: It is always a conversation piece to debate just who is the fastest Trojan on the 2020 team.

The Obvious: The Trojans get players from all across the country, and there are current Trojans on the 2020 roster that attended other four-year schools.

The Obvious: It is pretty much known that offensive coordinator/quarterbacks coach Graham Harrell is a huge WWE fan.

The Not So Obvious: Harrell is such a big WWE fan that he named his son (Herschel Hawk Harrell) in honor of WWE star Triple H. The coach also presents a WWE-type championship belt weekly to a Trojans quarterback who wins that week’s skills competition.

The Obvious: Ronald Jones ll is a former standout tailback for the Trojans (2015-17), who now plays for the Tampa Bay Buccaneers.

The Not So Obvious: In case you missed it, RoJo recently became the first player in the NFL this season to have three straight 100-yard games and the first Trojan to do so since Reggie Bush in 2011.

The Not So Obvious: This week, Sports Illustrated and ESPN confirmed that LSU has self-reported NCAA violations and will voluntarily lose eight scholarships over two years, reduce recruiting visits, evaluations, and communication, and have banned former Tiger Odell Beckham Jr., wide receiver for the Cleveland Browns, from its LSU football facilities for two years. Beckham reportedly gave $2,000 in cash to four Tigers football players on the field after the Tigers 42-25 victory over Clemson in last season’s CFP National Championship game.

The Obvious: The Trojans have played Iowa in last season’s Holiday Bowl in San Diego.

The Not So Obvious: Due to COVID-19, this season’s Holiday Bowl in San Diego has been cancelled. Also cancelled earlier, the Pac-12’s affiliation with the Redbox Bowl, which was played in the San Francisco area.

The Obvious: And finally, it’s not totally unusual for a college football team to have married players on its roster.

The Not So Obvious: The 2020 Trojans are no exception, as they list two married players. Both junior offensive lineman Andrew Vorhees and senior placekicker Michael Brown have already tied the knot.