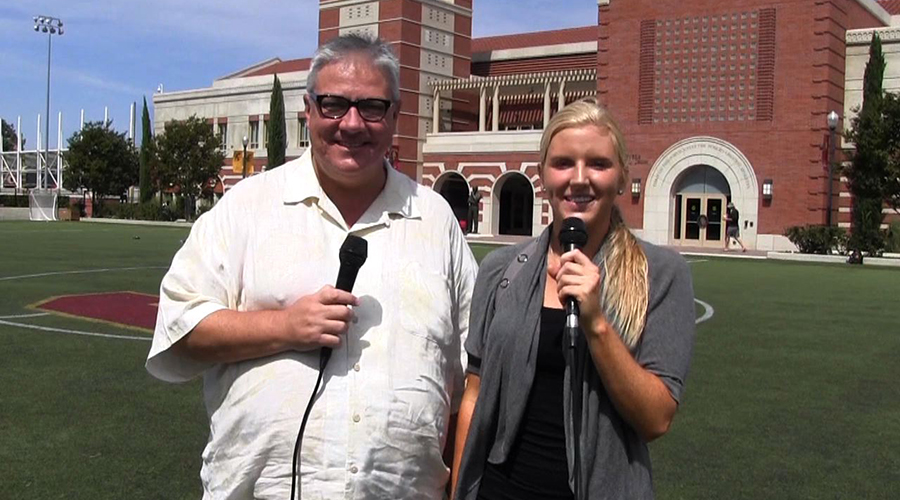 The Obvious: Over 14,000 viewers on the WeAreSC message board and over 250 comments have expressed their love and heartbreak over the recent passing of WeAreSC founder and publisher Garry Paskwietz who passed away last Sunday evening.

The Not So Obvious: Boy, the last thing Garry would ever envision is that he would be the subject of an O/NSO column, and it’s certainly a column I hoped I would never have to write. However, having been with GP since the early inception of WeAreSC, I wanted to share with all of you some positive vibes and stories – both positive and challenging – that hopefully are insightful, humorous, and upbeat. So, allow me to talk about the man who meant so much to my sports writing career – both in and out of the office so to speak. Consider today’s O/NSO kind of a GP question and answer session. And by the way, it was Garry that took my idea of The Obvious and the Not So Obvious and coined the “O/NSO” column name.

The Obvious question: So, when did you meet Garry, and how did your working relationship and friendship happen?

The Not So Obvious answer: Actually, we met before we formally met. It was during the Paul Hackett era when the Trojans were in August training camp at UC Irvine. We would both show up for two-a-days and he would be wearing a large straw hat and I would be in shorts and a USC T-shirt. We would talk Trojans football but never got around to introducing ourselves, which is odd since we are both extroverts. Anyway, I began writing on another website under the handle of “23-Blast,” which is one of the plays calls that O.J. Simpson made famous. In the course of writing one of my “thoughts and opinions” in a little harmless writing exercise I entitled “The Obvious and the Not So Obvious” – written under the “23-Blast” handle – I got an instant messenger message from the website from Garry. He wanted me to call him about adding me to his new website. That website was called WeAreSC.

So, while I was still an active high school teacher (38 years in English and journalism and a varsity coach), I called him, and he told me his Internet vision and wondered if I wanted to join. In the course of the conversation, we learned that we actually had been talking to each other at UC Irvine during Trojans training camp. GP said he didn’t have money to pay for my columns, but I would get a free subscription to his new site and comped for his monthly WeAreSC dinners. So, I sent him over an O/NSO column, and it went up immediately. Honestly, I was a little shocked that it could go up so fast, since I was basically computer illiterate. From then on, the rest of the years were like icing on the cake for the most part.

The Obvious question: Was Garry that nice of a guy away from the world of WeAreSC and USC football?

The Not So Obvious answer: Even nicer, a true good guy with a heart of gold who would give you the shirt off his back. Ironically, Garry could mix with the very rich and famous of both the Trojans business and athletic world and extend his heart out to those everyday folks that were just your normal fan. Garry treated everybody with grace and courtesy. He treated everyone the same, and everybody from all walks of life gravitated to him. He was everybody’s buddy.

The Obvious question: Although Garry seemed like everybody’s best friend, over the years, were there some people that seemed to have a special relationship with him?

The Not So Obvious Answer: Well, in my many years with Garry, it would be almost insulting not to list everybody he was particularly close with. However, since you asked, GP had a very special bond with people you know and don’t know. People you know would be Trojans’ super booster and confidant Brian Kennedy – he whose name adorns the football practice field. Then there was legendary Trojans’ quarterback Jim Hardy, whom Garry had a special place in his heart. And perhaps surprising to some, late broadcasting legend Tom Kelly, who actually wrote about Garry in his autobiographical book. One of Garry’s life highlights was working high school broadcasts with Kelly. He would tell me, “Can you believe that? I am working side-by-side with Tom Kelly! It doesn’t get any better than that!” Another who should be mentioned is Bruce “The Godfather” Bagni, who was extremely close to Garry although Bruce, a USC grad and retired federal prosecutor, lived in Jacksonville, Florida.

The Obvious question: Seriously, did Garry live for anything else than USC football?

The Not So Obvious answer: After the February signing period, he liked to drive by himself up the coast of California to visit friends in the Bay Area to regenerate himself from the long Trojans football season and recruiting signing day. And, oh yes, he loved Hawaii, especially Maui and Kauai. In fact, we both shared that same enjoyment, and he would tell me what restaurants I should visit. His taste in food was unmatched. Whether it was Maui. Northern California, Chicago, or Columbus, Ohio, Garry knew where to chow down.

The Obvious question: What was the biggest thing that Garry wanted to get across to readers of WeAreSC?

The Not So Obvious answer: Besides information on all aspects of USC football, I would say two things. First, Garry always told his staff that we didn’t need to break a story first, but we had to get it right. Believe me, Garry knew more about any and everything about USC football from the inside and the outside, but he never wanted to hurt the university, and he was ironclad in keeping secrets about the program and the team. His motto: Protect the team! Sound familiar?

The Obvious question: What do you think was Garry’s proudest WeAreSC accomplishment?

The Not So Obvious answer: That Garry could not only bring the local Trojan football fan base together, but those from across the country and around the world. He was so delighted to hear from fans and former players that lived out of the area because WeAreSC was their connection to Trojans football. Garry was so happy to tell me how he would hear from somebody on the East Coast and how much they appreciated no feeling in SEC or Big Ten country. He accomplished his goal of bringing USC fans from all over the world together through his electronic meeting place.

The Obvious question: What do you think was Garry’s darkest moment with WeAreSC.com?

The Not So Obvious answer: No question it was our move to ESPN. Garry made the move because at the time he believed that by moving to that famous four-letter word we would get instant credibility not only nationally but in term of gaining press credentials, press privileges, and increased media respect. He believed that although we ran the risk of being devoured and perhaps disappear into the ESPN universe, it was worth the risk for Internet acceptance. As most of you know, it turned out that ESPN saw us as a competitor threat to a new area (college websites with recruiting) and basically bought us out of to help eliminate the competition. In recent conversations with Garry about the move to ESPN, he and I agreed that it helped greatly in gaining media credibility, so it was kind of like winning the battle but losing the war. He did say that he didn’t regret the move but definitely the final outcome.

The Obvious question: What should readers know about Garry that they didn’t know?

The Not So Obvious answer: Garry was an absolute Elvis Presley fanatic, and on our rides up to campus from Orange County, he would either be playing an Elvis CD or listening to the Elvis station on Sirius radio. He was giddy to tell me how as a young boy he saved enough money to have his family take him to Las Vegas to see Elvis in person. I told him that Elvis was also one my favorites and that I, too, saw Elvis in Vegas and he was quite thrilled. Oh, and for the record, I was 16-years-older than Garry, but he sure never acted like there was a difference in our age. Another thing we both had in common was that we both hated going to the doctor. We performed therapy together describing our unfortunate fears of the medical world.

The Obvious question: What would Garry want to see about WeAreSC now that he is looking down at us?

The Not So Obvious answer: For the site to continue and readers stay together on the message boards. Garry told me before his passing his vision of the future for WeAreSC. Many of those ideas will be executed in the upcoming season, and he also had a plan for his staff and leadership of the site, which he ran by me. I told Garry that being the publisher was a young man’s game, and I told him that I believed that Erik McKinney would be the perfect choice as the new publisher if Garry decided to head into retirement. Garry believed McKinney was the right choice. Garry’s plan was to run the site another 5 to 10 years and then hand it over to Erik. Obviously, that plan was accelerated by the recent events. I told GP that Erik would make an outstanding publisher, and if I was still around, I would be happy to remain an “assistant coach” or the “wise old consultant” if needed while still continuing to write. Garry had a plan, and we’re now going to execute his vision of the future. I have no doubt that the current state of WeAreSC is extremely positive and will continue for years to come.

The Obvious question: And finally, what most will you miss about Garry?

The Not So Obvious answer: The easy answer is everything. No question his friendship and those occasional lunches or dinners where we would talk about the state of USC football and life in general. He had a great sense of humor with puns and simple jabs – never hurtful. A selfless human being, GP was truly a gentle man and gentleman and is irreplaceable both as the publisher of WeAreSC and as a contributing member of our society. While we question why he had to leave us so soon, I am truly grateful for all that he did for me and my association with him. I don’t know if heaven has Internet coverage of USC football, but if it doesn’t, Garry Paskwietz will make sure that it does.