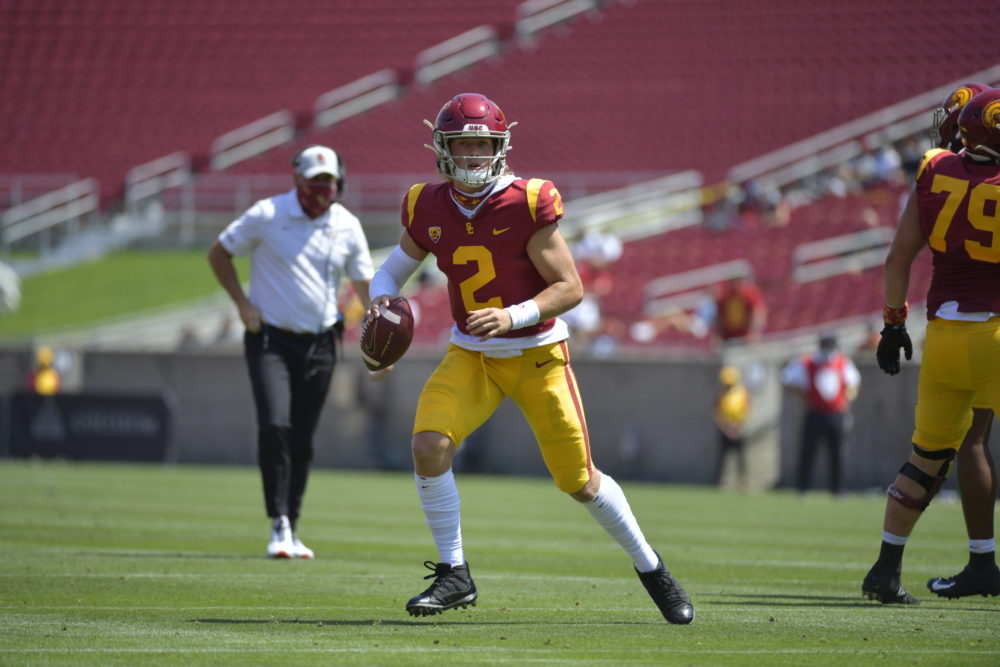 The Obvious: It’s official. On a post on Twitter, Vanderbilt quarterback grad transfer Mo Hasan announced on Monday than he did suffer an ACL knee injury during last Saturday’s Spring Showcase, which means surgery and so-long for 2021. So, now it’s next “men” up behind All-Pac-12 quarterback Kedon Slovis, and that means either true freshman Jaxson Dart (photo above) or true freshman Miller Moss.

The Not So Obvious: Whoever thought that a relatively unknown grad transfer quarterback, Mo Hasan, who didn’t even play last season due a previous surgery, could create such attention towards the main quarterback backup position? Although it might have been assumed that Hasan would have been leaped over by either or both Jaxson Dart or Miller Moss in the future anyway, the injury to Hasan all but assured – barring a late NCAA Transfer Portal quarterback acquisition – that if Slovis goes out for a down, series, game, or long term, the future will probably be now in the right arms of one of the two freshmen wunderkinds.

The two frosh QB prodigies, Dart and Moss, have had their individual moments during the first half of spring practice – some really good, some not so good, which serves as a reminder that both should still be in their senior year in high school.

The Obvious: Quarterback Jaxson Dart was the 2020 MaxPreps National Player of the Year.

The Not So Obvious: As he demonstrated during the Spring Showcase, Jaxson Dart is possibly either the second coming of Sam Darnold or a Darnold imposter. Only time will tell if Jaxson has the Darnold alpha dog mentality. Certainly, Jaxson has the resume up to this point.

Is Dart the real deal? We’ll find out when Jaxson plays meaningful minutes in a real game.

The Not So Obvious: You’re familiar with the Miller Moss saga of attempting to transfer from one parochial school (Mission Hills, Calif./Bishop Alemany) to another (national powerhouse Santa Ana, Calif./ Mater Dei). Since there was no fall California high school football season due to COVID or the fact that he would have been ineligible to play at Mater Dei due to a technicality anyway, it mattered little since he planned all along to enter this spring as a Trojan.

Despite the glow of Jaxson Dart’s arrival, Miller Moss is no slouch – far from it. Some of Miller’s honors prior to enrolling at Troy include making the 2020 PrepStar Dream Team and Southern California News Group Fab 15 first team as a senior quarterback listed at Bishop Alemany High.

Moss is a cerebral quarterback with an accurate arm. Like Dart, we have no idea regarding his actual playing ceiling until he, too, gets meaningful minutes in a real game.

The Obvious: With attention now more than ever being focused on the main backup for quarterback Kedon Slovis, it reenergizes the already major concerns of the work-in-progress offense line, which is working to not only better protect all USC quarterback in Graham Harrell’s passing circus but the current emphasis to also improve a rushing attack that ranked last in the Pac-12 in 2020.

The Not So Obvious: The O/NSO would think that given the precarious situation that the Trojans could be in if Kedon Slovis does go down at any time next season, it would be a nice insurance policy to have a productive and effective running attack to help take the presumed pressure off either Jaxson Dart or Miller Moss.

Certainly, the Trojans array of talented running backs can all do the job as ball carriers, but it remains to be seen that despite all the offensive skill talent on hand – which includes as good a receiving unit as one might find in the country – you just can’t get away from or ignore the massive importance of an effective offensive line whether it’s pass or run blocking.

The Obvious: Clay McGuire is the Trojans first-year offensive line coach, having previously been the O-line coach at Texas State.

The Not So Obvious: You have to wonder if McGuire realized the true amount of scrutiny that he and his offensive line would be under when he accepted the position as the Trojans’ O-line coach. One thing for sure, this isn’t Texas State in San Marcos, Texas. It’s legendary USC in Los Angeles, California. Need we say more?

The Obvious: In almost any conversation, it’s hard to get a group to have unanimous agreement on any topic these days – athletically or politically.

The Not So Obvious: Of course, there is always the exception to any rule, and that applies when it comes to the Trojans work-in-progress offensive line. There is no descent that the ultimate success of the 2021 season starts with the development of the O-line. And if you think the Trojans’ offensive linemen are sick and tired of hearing about it, wouldn’t you be?

The Obvious: The Spring Showcase is now history, and the 2021 USC Trojans have just one more week or to put it precisely, just four more days of spring practice including a probable scrimmage this Saturday.

The Not So Obvious: In the upcoming four practice days left, a lot of attention is expected to be directed at the newcomers and what was seen on the Spring Showcase film. With the Trojans having one more scrimmage, it figures this could be one last opportunity for younger players to leave an imprint in the minds of their position coaches and head coach Clay Helton. Let’s not forget the balance of the talented Class of 2021 freshmen will be arriving for August training camp, which includes defensive lineman Kory Foreman, the nation’s No. 1 player from the Class of 2021.

The Obvious: One area of growing concern during spring practice has been the number of injuries from before and during spring ball.

The Not So Obvious: Unfortunately, recently Trojans senior defensive tackle Brandon Pili tore a tendon in his Achilles and has already undergone surgery. It appeared that Brandon was making strides under second-year defensive line coach Vic So’oto. Then there are the hamstring issues, which we saw during the Spring Showcase with talented sophomore wide receiver Gary Bryant Jr. coming up limping.

The Obvious: Timing is everything.

The Not So Obvious: You may be aware that the Trojans have a bye week before they play Notre Dame in South Bend on Oct. 23. However, perhaps you weren’t aware that leading into the bye week the Trojans first host physical Utah in the Coliseum on Oct. 9, so the bye week will be especially appreciated to get the Trojans well and healthy for their battle with the physical Irish. What you may not know is that following the Trojans trip to South Bend, the Men of Troy host Arizona (homecoming) on Oct. 30.

The Obvious: Because his sister Charli Collier was being selected as the No. 1 overall draft pick of the WNBA, Clay Helton gave permission for redshirt freshman offensive left tackle Casey Collier to miss last Saturday’s Spring Showcase and be with his family.

The Not So Obvious: The O/NSO has no problem with the Trojans head coach allowing Collier to be with his sister even when that meant having Casey being quarantined for a week upon his return and missing some practice days. Each case has to be judged on its own merit, and we thought Gentleman Clay made the right, reasonable call on this one. Give the Trojans’ head coach credit for living up to his cred: Faith, Family, and Football – in that order.

The Obvious: And finally, it looks as though former USC commit, quarterback Bryce Young (Santa Ana, Calif./Mater Dei HS), has taken the lead as Alabama’s starting QB for 2021.

The Not So Obvious: Last Saturday, Young was the first-team Bama quarterback during the Tide’s spring game and was named the Most Valuable Player for his winning team, completing 25 of 44 passes for 333 yards, one touchdown, and no interceptions, which drew praise from head coach Nick Saban. The Tide is scheduled to open the 2021 season on Sept. 4 against the Miami Hurricanes in Atlanta.