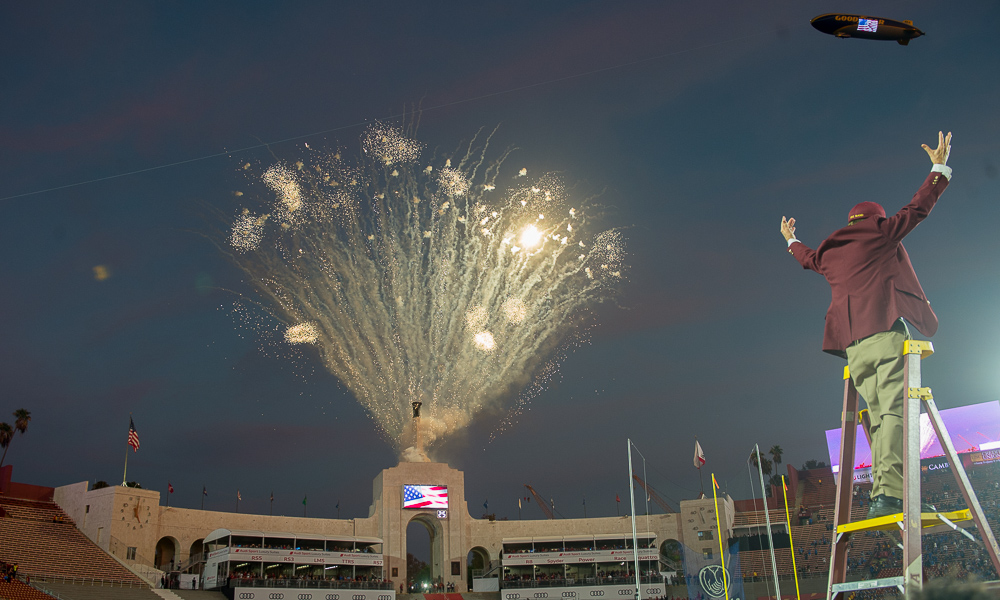 The Obvious: Sunday will mark another in a great line of USA holidays as our country celebrates the Fourth of July, marking our independence from England. After last COVID’s July 4th restricted holiday, a sense of normalcy is returning with barbecues, picnics, and fireworks celebrations either at home, the beach, or a traditional location with family and friends.

The Not So Obvious: In the great spirit of fireworks, we looked back into some of our past O/NSO July 4th columns and put together a revised array of USC football video pyrotechnics. Maybe it was an explosive run, an electrifying pass play, a lethal tackle, it all adds up to our own Red Devil Fireworks video box.

The Obvious: There have been many memorable USC explosive “hits’ on defense over the decades, but nobody could deliver a bigger “firework” if given the opportunity than former Trojans’ All-America linebacker Rey Maualuga.

The Not So Obvious: During his playing time, he was arguably the hardest hitting linebacker in the country. Enjoy this video box full of “Rey Rey” highlights.

The Obvious: When you talk about explosive USC football offensive fireworks, no question you have to include the late “Jaguar” Jon Arnett, a 50s running back, who didn’t get his nickname because he was a straight ahead runner with moderate speed.

The Not So Obvious: Step away from the fuse because some of Jaguar Jon video highlights are about to ignite:

The Obvious: Okay, like him or not, you can’t have a true July 4th weekend of USC video fireworks highlights without Heisman tailback O.J. Simpson.

The Not So Obvious: The moves and explosion speak for itself. If you’re not impressed with the first video highlights below, perhaps the second video below against Ohio State in the 1969 Rose Bowl will bring you some gasps and awes.

The Obvious: Is there anything more obvious than putting Reggie Bush right up there with O.J. Simpson when it comes to explosive plays?

The Not So Obvious: So, relax and enjoy some of Bush’s best fireworks moments wearing cardinal and gold.

The Obvious: Like the O/NSO said, this column is a piece that not only recognizes individual explosive plays but team and game fireworks, too.

The Not So Obvious: The 2005 USC win at Notre Dame was a $500.00 box of pyrotechnics in South Bend, so don’t get too close or you might get burned like the Irish.

The Obvious: You can bet the Irish didn’t like that last video, but you can’t have some pigskin fireworks without having Trojans’ legendary tailback and kickoff returner Anthony Davis as a central figure. Sorry Irish.

The Not So Obvious: Trojans’ Hall of Fame coach John McKay saw big fireworks in a small package when he started tailback Anthony Davis against the Irish.

The Obvious: When you talk about players that lit up the cardinal and gold skies on both offense and defense, one doesn’t have to look far when the name of Adoree’ Jackson is mentioned.

The Not So Obvious: Adoree’ displayed his incredible skills on both sides of the ball against some of college football’s most respected programs, and here is the evidence below.

The Obvious: There have been so many gridiron fireworks that have come from the USC/UCLA crosstown series.

The Not So Obvious: In the following video below, pay close attention to the hellacious “hit” delivered in 1969 by Trojans’ All-America defensive end and Wild Bunch homie Charlie Weaver on UCLA quarterback Dennis Dummit, which ranks as one of the legendary tackles in the history of the rivalry.

The Obvious: One of the great but underrated USC tailbacks was Ronald Jones, a USC back who could have thrived in any era.

The Not So Obvious: Ronald could have been recognized even more for his ability to find the end zone from anywhere on the field and deserves to be in this O/NSO fireworks box.

The Obvious: In 1969, the Trojans were also known as the Cardiac Kids for their many late wins, draining USC fans throughout the season. However, one particular game against the Stanford Cardinal in the Coli ended in one of the great field goal efforts by 5-9 placekicker Ron Ayala.

The Not So Obvious: Below is one of the all-classic games in the history between the Trojans and the Cardinal.

The Obvious: Our nation has seen many social changes along the way, and USC super fullback Sam “Bam” Cunningham helped change the attitude of integration of football in the South. Here is a short documentary on how that explosive evening against Alabama came about.

The Not So Obvious: The way are country is now and race being a major topic, this July 4th brings some extra reminders of how things were back in 1970 and how things changed for the better after that historic night in Birmingham.

The Obvious: One of the USC’s greatest players of all-time and one of the game’s most violent but play-fair competitors ever was Trojans’ defensive back Ronnie Lott.

The Not So Obvious: Ronnie is on everybody’s All-Century team albeit college or the NFL. Here is a little reminder of his fireworks both on and off the field.

The Obvious: When it comes to thrills and the dramatic, was there anybody more dynamic than former Trojans’ quarterback Sam Darnold?

The Not So Obvious: Sam could make it happen when there was nothing there to happen. Ask the 2017 Texas Longhorns about Darnold – who showed he could bounce back from a big touchdown interception – and rebound with his explosive ability.

The Obvious: And finally, how could we pay homage to some of the most exciting and explosive moments in USC football history without reliving Sam Darnold’s performance in the 2017 Rose Bowl game against a tough foe in Penn State?

The Not So Obvious: So, light up the skies in Pasadena, Sam, and give us an encore of USC July 4th football fireworks.