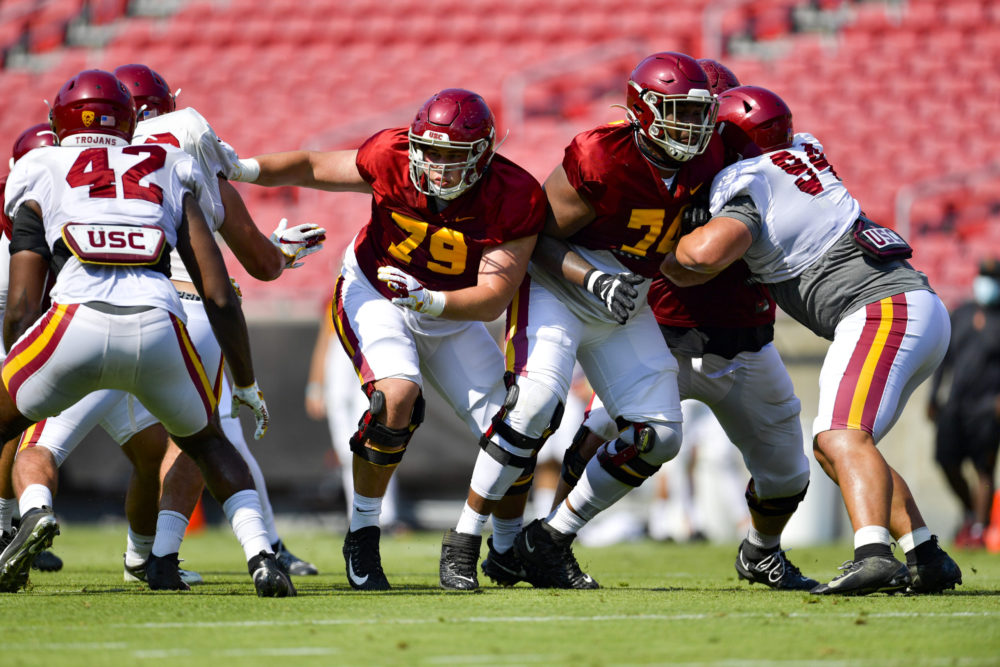 The Obvious: With spring ball commencing this Tuesday, March 30, there will be a number of important position battles that could lay the foundation for success or failure for the upcoming 2021 USC Trojans football season.

The Not So Obvious: We all have our opinions just where the big consequential spring position battles will be centered, and the O/NSO certainly has our list of the top five areas for scrutiny. So, “Fight On and Read On” as your humble correspondent presents our top-five position group battles.

The Obvious – Battle 1: Now that Matt Fink has “retired” as the Trojans’ backup quarterback, there will be a sense of urgency to development a backup quarterback, and it appears that backup will come from the spring progress of the two incoming freshmen quarterbacks, Jaxson Dart and Miller Moss.

The Not So Obvious: Since offensive coordinator Graham Harrell’s version of the Air Raid offense has been basically an effective one-dimensional offense the past two seasons – 10th in Pac-12 rushing in 2019 and last in 2020 – the battle between Dart and Moss as the caddy for Kedon Slovis is of paramount importance.

Given the health history of Slovis, it suggests that Dart or Moss will be called upon to climb into the “pass-enger” seat at some point during the season. Each of the these gifted freshmen figures to get the opportunity to strut their stuff this spring, so every second of competition will be under the microscope. When it gets down to it, how much both frosh can advance during spring will be fully revealed during the three or so “hitting” scrimmages.

Kedon Slovis looked good throwing the pigskin around during Wednesday’s USC Pro Day and showed he’s ready for spring ball, but it shouldn’t interfere with the amount of reps for the backup candidates.

The Obvious – Battle 2: With All-America offensive left tackle Alijah Vera-Tucker awaiting next month’s NFL draft, there is a sense of urgency to find his replacement.

The Not So Obvious: When Austin Jackson headed for the NFL after the 2019 season, there was great stress in the cardinal and gold offensive kingdom as to who could replace the eventual Miami Dolphins first round draft pick. The logical move before the 2020 season was to take offensive guard Alijah Vera-Tucker and slide him into Jackson’s vacated left tackle spot. Obviously, that turned out to be a real winner.

Fast forward to the spring of 2021 and like a dehydrating straggler searching for water in the heat of the afternoon desert, the Trojans actively tried to find a left tackle prospect in the NCAA Transfer Portal. Unfortunately, those portal targets eventually matriculated to other destinations. The reality – for now – is that first-year O-line coach Clay McGuire will mentor what already is on the shelf.

All eyes, including those of Kedon Slovis, will be laser focused on that competition at left tackle, a position that will try and keep Slovis vertical and out of harm’s way throughout next season. There are bodies, and on Monday Clay Helton revealed four potential AVT spring replacement candidates: Veteran starting right tackle Jalen McKenzie and youngsters Courtland Ford, Jonah Monheim, and enormous Casey Collier (6-9, 317). Keep an eye on Ford.

The Obvious – Battle 3: The Trojans will be looking for a replacement for departed All-Pac-12 defensive tackle Marlon Tuipulotu, who also left early for the dream of competing in “The League” and looked good during Wednesday’s Pro Day evaluations on Cromwell Field.

The Not So Obvious: When you think about it, the Trojans are really losing both starting defensive tackles if you consider the departure of Tuipulotu and Jay Tufele, who actually opted out last season for personal reasons and didn’t play. That being said, second-year D-line coach Vic So’oto has a much firmer grasp of the talent on hand after last season and that should help.

While it seemed like one of the lead DT replacement candidates would be Alabama transfer Ishmael Sopsher, the expectations for Sopsher were tabled when Clay Helton disclosed earlier this week that Ishmael underwent compartment syndrome surgery (a muscle blood flow issue) and will miss a good part or all of spring ball.

One other lead candidate for a DT spot is sophomore Tuli Tuipulotu, who played very well last season as a freshman, but there’s no guarantee he’ll automatically get the starting call heading into August training camp. What it all means is that the two defensive tackles spots during spring ball are up for grabs. One returner who could be highly motivated by recent events is senior Brandon Pili, who has the ability to make a push this spring for one of the open vacancies.

The Obvious – Battle 4: The siren’s song of the NFL was too much for corner Olaijah Griffin, and he decided to head to the NFL early, which created an opening for his former starting position.

The Not So Obvious: Whether you think that Griffin, who did not attend Pro Day because of a reported case of COVID, grew impatient or made a premature move to get to the riches of the NFL, it’s now water over the bridge. The task at hand now is to find a replacement, and there are a lot of bodies for second-year corners coach Donte Williams. Is it too much to ask of the talented early-entering freshmen to throw their “hats” in the ring this spring? For right now, veteran Isaac Taylor-Stuart appears to have the inside track to replacing Griffin, but we shall see.

The Obvious – Battle 5: The 2020 Pac-12 Defensive Player of the Year, All-America safety Talanoa Hufanga, bid the Trojans adios after last season in favor of paychecks from the NFL, so there is a Grand Canyon position void in Todd Orlando’s Trojans attacking defense as we head into spring ball.

It appears that the safety candidates may be young and inexperienced, but don’t count out some of the veterans who have the advantage of already having been in Todd Orlando’s defensive system. One youthful safety candidate to keep an eye on that drew praise from Helton this week is Texas transfer safety Xavian Alford, who was once recruited for the Texas Longhorns by Orlando and current Trojans’ safety coach Craig Naivar. Another name that could emerge is Chase Williams, who has some game experience and has shown flashes of exceptional play.

The Obvious: And finally, there will be other position battles but perhaps no less important and also keep an eye out for any position changes during spring.

The Not So Obvious: So, the 2021 season actually begins on Tuesday afternoon on Howard Jones/Brian Kennedy Fields, and where it goes from there will be worth chronicling and, to say the least, very intriguing.