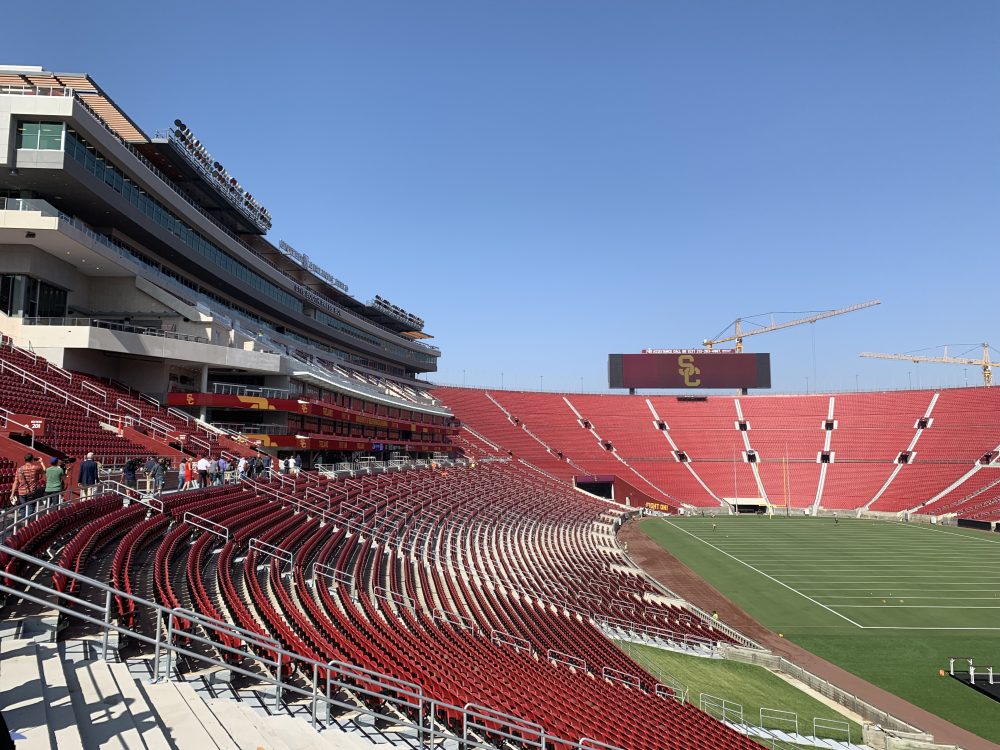 The Obvious: On Saturday afternoon between 1:30 p.m. and 6:30 p.m.,the 2019 USC Trojans football team and the completed Coliseum renovation project will both reveal themselves to season ticket holders and the general public with what is being billed as the “Fall Showcase,” which in essence is a chance for fans to watch Scrimmage No. 2, make their own evaluations of the progress of Clay Helton’s team while also having the opportunity to tour the ballyhooed Scholarship Tower, a major part of the completed Coliseum renovation project.

The Not So Obvious: If you weren’t sure if you were going to attend the Fall Showcase scrimmage, let the O/NSO assure you that need to come and take a tour of the Scholarship Tower and its seven stunning floors. Folks, from both the inside and the outside, this is a opportunity to view its overwhelming opulence, the posh, and meticulous attention to USC football historical detail through photographs, flags, and audio, all of which rivals any stadium in the country. If you have read either the O/NSO or the IMHO Sunday, you know that from the beginning, we thought the whole structure would be a disaster. I was wrong, wrong, wrong and happy to say so. It is unbelievable in its final form – inside and out. Need a little to tease or “movie trailer” to get the itch to come on Saturday? Okay, if you haven’t seen WeAreSC.com publisher Erik McKinney’s video piece along with yours truly on a tour of the facility, just click here: https://wearesc.com/los-angeles-memorial-coliseum-media-tour/

The Obvious: Aside from the football end of it, the Fall Showcase has something for everybody.

The Not So Obvious: Here is Saturday’s Showcase schedule:

1:30 p.m. – Gate 1 (Peristyle) opens to the public for assembly for a player autographs session. In terms of admission to the Fall Showcase scrimmage, tickets are complimentary to season ticket holders (1 per season ticket), students with ID and children under 2; others can purchase tickets in advance ($10) at USCTrojans.com/tickets or day of the event ($15) at the Gate 1 ticket office.  All seating is on the south side and is unreserved.  Those who have season tickets on the north side can visit their seats from 5:30 p.m. to 6:30 p.m.

2:30 p.m. to 6 p.m. – Concessions will be open in the Heritage Concourse (Level 1) of the Scholarship Club Tower. Concession items by credit cards only.

The Obvious: The weather forecast for the Fall Showcase in the Coliseum calls for partly cloudy with a high of 78 degrees and 67% humidity.

The Not So Obvious: The real weather report is whether Helton’s version of an “NFL exhibition game” is actually a game without any real special teams collisions. We’ll find out whether this week’s second scrimmage is an improvement over last Saturday’s lack of team discipline in Scrimmage No.1, as it pertains to penalties on both sides of the line of scrimmage. We’ll see whether one of the competing four quarterbacks can pull away from the pack, and whether the offensive line can dominate the defensive line in the areas of rushing and pass protection. We’ll also find out whether the inexperienced secondary has taken the lessons learned in Scrimmage No. 1 and can apply it to Saturday’s confrontations. And, finally, we’ll see whether the fan attendance count on Saturday is a reflection of the state of mind and interest of Clay Helton and his 2019 USC football team.

The Obvious: The main discussion of the day will be the results of Scrimmage No. 2.

The Not So Obvious: There are a number of position battles going on, but the one most targeted is the competition at quarterback. This will be the fans only opportunity to make their own distinctions among sophomore JT Daniels (6-3, 210/No. 18), sophomore Jack Sears (6-3, 205/No.10), junior Matt Fink (6-3, 200/No. 19), and true freshman Kedon Slovis (6-2, 184/No. 9). Realistically, the first three quarterbacks are where the starter will come from. Based on last week’s scrimmage, one would have to surmise that Daniels, Sears, and Fink are the main challengers for the starting spot. Although Clay Helton said there will be one more “closed” scrimmage following Saturday’s scrimmage, this weekend’s evaluations will go a long way in deciding which signal caller Helton and OC Graham Harrell select. It’s conceivable that the starter could be named as early as next week before the final closed scrimmage, which will also be closed to the media.

The Not So Obvious: In the past, the Trojans’ head coach has referred to this type of “NFL-style exhibition” as “game-like.” We’ll see if Saturday is truly game-like. In the past, it hasn’t quite lived up to its billing. It should be interesting. Last week on campus, Helton, however, was true to his word in making Scrimmage No. 1 a long and informative display of competition.

The Obvious: The Trojans have what many are calling the best receiving unit in America.

The Not So Obvious: USC fans should especially pay attention to two true freshmen that are sure to catch your eye. Those freshmen wide receivers would be Drake London (6-6, 205/No. 15)and Munir McClain (6-6, 210/No. 13). Both have proven in practice and in Scrimmage No. 1 that they have “star” written all over them. However, McClain is questionable on Saturday due to going through concussion protocol.

The Obvious: The Trojans have a superior group of running backs for 2019.

The Obvious: As what seems to be a yearly issue, your scrutiny will probably be focused on the Trojans’ offense line in its attempt – again – to be physical, carve out a running game, and protect the quarterback.

The Not So Obvious: Although there were too many O-line penalties in Scrimmage No. 1, coach Tim Drevno’s offensive line should eventually be better than last season’s underperforming unit. Players you might want to focus in on are new starting sophomore center Brett Neilon (6-2, 295/No. 62) and current bookend starting tackles in junior Austin Jackson (6-6, 305/No. 73) and sophomore Jalen McKenzie (6-5, 310.No. 70). And pay attention to NCAA Portal Transfer Drew Richmond (6-5, 315/No. 53), the former tackle starter from Tennessee.

The Obvious: One of the keys for fans to watch along the offensive line will be new center Brett Neilon (6-2, 295), the sophomore from Rancho Santa Margarita Catholic.

The Not So Obvious: Asked about the “new” change of offensive line culture and having seen the renovated Coliseum, Neilon said, “Obviously it starts with our strength staff. It’s a huge plus. All those guys are great from Double-A (Aaron Ausmus) and his assistants. We’re super competitive; we’ve be holding each other accountable, and that’s been huge. We’re all brothers if somebody needs a hand. Doing extra work and doing extra weights. Obviously, we’re going to run the ball (as well as pass). We preach physicality, and that’s the name of our game. If people think we’re going to be soft, we’re not. We’re going to run the ball and be physical. It’s a new year, and I am not going to compare (physicality) from last year, but we’re going to come out with a chip on our shoulder, and we’re going to show people what we’re made of.

“Walking in there (the Coliseum last Friday night), it was beautiful, seeing all those new seats. The place looks bigger, which is weird because they took out all those seats. That press box is insane. That thing is huge. There’s nothing in front of the Coliseum with the fire flame (the peristyle end), it looks prettier now.

“Playing in the Fall Showcase (on Saturday) is exciting and great for our team. First, playing in the new stadium with the noise and our fans and playing in the place that we’re going to play, so I think that’s huge. For the younger guys, when they walk in against Fresno State they won’t be as shell-shocked. They’ll kind of get that atmosphere already. I think it’s a great idea (the Fall Showcase), and it brings our fans out and shows them a little insight.”

The Not So Obvious: Asked what he would like to see in Saturday’s Fall Showcase, the veteran DC said, “The biggest thing obviously is the communication is going to be big but tackling in space. I want to see the guys closing on the ball and tackling in space. We’re really counting on the YAC yards, yards after first initial contact. It’s one thing I am really talking about a lot now that we’ve talked about the techniques and how you come to balance and how you make an inside, outside call when there’s a buddy with you in certain coverages knowing who’s coming with you. We hope they’re not too big-eyed coming into the Coli.”

The Obvious: There are high expectations for the Trojans’ defensive line.

The Not So Obvious: It’s been pretty much acknowledged that bringing in first-year D-line coach Chad Kauha’aha’a was a major upgrade. The D-line has been an attacking unit thus far in training camp, and one player to concentrate on is true freshman Drake Jackson (6-4, 280/No. 99) from Corona (Calif.)/Centennial). Barring injury, the kid will one day be playing for pay on Sundays. And, no we didn’t forget sophomore Jay Tufele (6-3, 310/No.78), a preseason All-Pac-12 selection and an All-American future.

The Obvious: The Trojans are deep and talented at the linebackers’ position.

The Not So Obvious: The newcomer on defense who has also really made an impression is true freshman inside linebacker Ralen Goforth (6-2, 225/No. 19) out of powerhouse Bellflower, Calif./St. John Bosco. It’s rare to have a true freshman with such a combination of athletic talent and a high football IQ. Of course, then there’s the awesome talent of sophomore inside linebacker Palaie Gaoteote lV (6-2, 250/No.1), who is ready for a breakout season and numerous post-season honors.

The Obvious: There has been a lot of noise over the Trojans’ youthful and inexperienced secondary.

The Not So Obvious: See for yourself on Saturday when it comes to the secondary. First-year secondary coach Greg Burns has been working hard to try and eliminate mental errors. Players you will want to pay attention to are sophomore corner Olaijah Griffin (6-0, 180/No. 4), true freshman corner Chris Steele (6-1, 190/No. 8), and sophomore safeties Talanoa Hufanga (6-1, 215/No. 15) and Isaiah Pola-Mao (6-4, 200/No. 21). This group has had its hands full in practices trying to cover the Trojans’ gifted receivers.

The Not So Obvious: As the O/NSO has been writing since spring ball, focus on punter Ben Griffiths (6-5, 230/No. 15) and try to identify the type of kick Big Ben is punting (spiral, end- over-end, knuckleball, etc.). And while you’re at it, welcome back sophomore placekicker Chase McGrath (6-0, 195/No.40), who is coming off of knee surgery from 2018 and has looked good in training camp.

The Obvious: And finally, if you’re still not excited about attending the Fall Showcase, a reminder that two weeks from Saturday will be the season opener against the Fresno State Bulldogs.

The Not So Obvious: Or to be precise, just 16 days until the 2019 season gets underway.