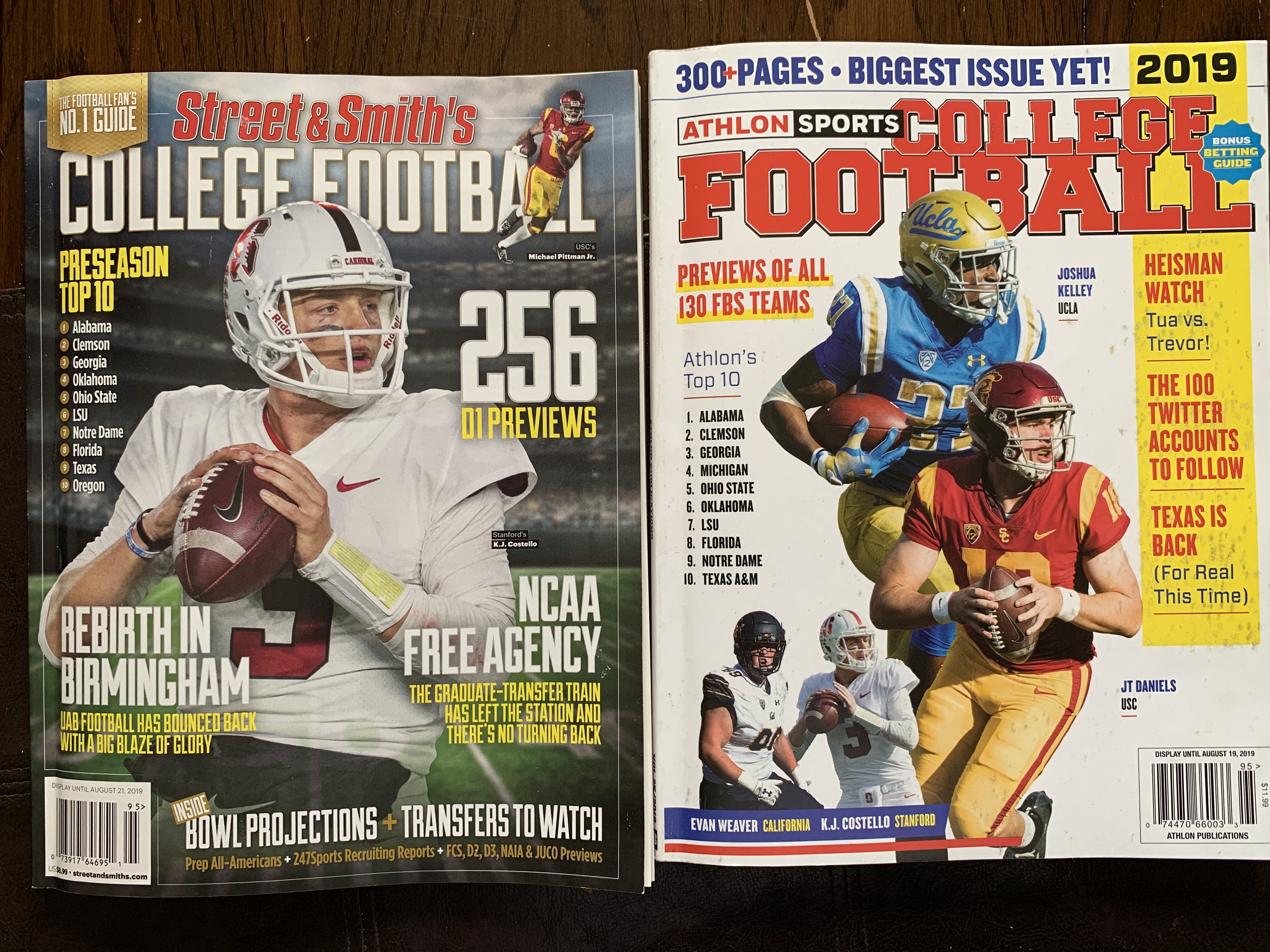 The Not So Obvious: The 2019 college football season is still four months away and two of the leading powerhouse college football magazines, Athlon College Football and Street & Smith’s College Football, have already arrived for your edification. Of course, for USC fans, there is always the fascination to see where and why these publications place the Men of Troy where they do for the upcoming season. It should be noted that Lindy’s and Phil Steele’s, which takes a backseat to neither Athlon and Street & Smith’s, have yet to make a public appearance.

The Obvious: Athlon and Street & Smith’s publications are a national perspective with conference ratings and rankings also part of the mix.

The Obvious: Although the Trojans aren’t listed in Athlon’s and Street & Smith’s Top 25, there are some Pac-12 schools ranked in both publications.

The Obvious: Both Athlon and Street & Smith’s have a Pac-12 preview.

The Obvious: Athlon and Street & Smith’s each has an All-America team.

The Not So Obvious: Not surprisingly, neither publication lists a Trojan on their All-America teams. In fact, Athlon does not have a Trojans on their first, second, or third-team All-America listings. As for Street & Smith’s, the publication has a first and second-team All-America squad, and no Trojans are listed. The lack of a Trojan is not shocking but more a reflection of the times in which we live.

The Obvious: Athlon and Street & Smith’s both have a preseason All-Pac-12 team(s).

The Obvious: Athlon and Street & Smith’s both have post-season bowl predictions.

The Not So Obvious: Both Athlon and Street&Smith predict the Trojans will play in the Cheez-It Bowl in Phoenix. However, the publications aren’t in agreement in the opponent. Street & Smith’s predicts the Trojans will play Texas Tech while Athlon says it will be Baylor. FYI, the Cheez-It Bowl is played on Friday night, Dec. 27, in Phoenix at Chase Field (ESPN). That should send USC fans scurrying for advanced tickets.

The Obvious: Sophomores JT Daniels and Jack Sears are still expected to battle deep into training camp for the starting quarterback position.

The Not So Obvious: Both Athlon and Street & Smith’s have Daniels as the Trojans’ starter for 2019.

The Obvious: Generally, college football publications have a “final analysis” at the end of an individual team preview.

The Not So Obvious: Athlon and Street & Smith’s differ in their how they go about a “final analysis.” Regarding the 2019 Trojans, Athlon writes, “The Trojans should field a more competitive team in 2019. Then again, their schedule makes for a hard hill to climb. Oregon and Washington, the favorites in the North Division, return to the slate, and the nonconference games include road trips to BYU and Notre Dame. But no team in the Pac-12 is unassailable, and if USC can successfully regroup by fixing an offense that was at its least productive since 2001, then it can be a viable contender in the conference race.” Street & Smith’s doesn’t do such a formal final assessment but does write, “In the month of September, USC will host Stanford and Utah while facing BYU and Washington on the road. It won’t take long to see what kind of days really are ahead.”

The Obvious: One of the popular features of a college football preview is when a publication gets a “scouting report” from an unidentified opposing coach.

The Not So Obvious: Athlon goes the extra mile in getting one of those mystery coaches to assess the Trojans. Of the Men of Troy, the mystery opposing coach says, “Everyone will be watching to see if they can turn this thing around. They have to get it done this season or Clay Helton is gone. A lot of us thought their administration would make a change last year, but USC is a different place. A lot of their decision-making isn’t like most places…Losing Kliff Kingsbury is understandable – the guy got a head job in the NFL – but it’s still not a good situation. Graham Harrell will have some really talented guys to work with. They won’t be drastically different; they’ve played in the gun for a while now. It won’t look as extremely different as we’re hearing in the off-season. It might be an improvement over last year.

“Of all the things around the program, their inability to run the ball is their biggest problem. They just don’t look like the USC you expect. Mike Jinks was a great running backs coach in an Air Raid at Texas Tech. So yeah, the hires say they’re going all-in on the Air Raid. It might look strange, but they’re heading that way…They have to count on two things happening – JT Daniels getting comfortable in that system right away, and the defense cleaning up…The defensive front is more or less the same, but they aren’t those scary NFL guys we used to see come out there.  They don’t worry you anymore.”

The Obvious: Both Athlon and Street & Smith’s list “Coaches on the Hot Seat.”

The Not So Obvious: Both Athlon and Street & Smith’s agree that the No. 1 coach on the national “hot seat” is Trojans’ head coach Clay Helton. Athlon writes, “Helton was never fully embraced by the USC faithful even as he won a Rose Bowl (2016) and Pac-12 title (2017). In his first two full seasons on the job. So, it’s safe to say his approval rating is at an all-time low after the Trojans slumped to 5-7 in 2018, the school’s first losing mark since 2000, the season prior to Pete Carroll’s arrival. Helton shook up his staff in the offseason and will be expected to show significant progress this fall.” Street & Smith’s writes, “The Trojans slipped to 5-7 last season and (Clay) Helton is working with a full-scale remodel with his coaching staff. That was made more difficult when newly hired offensive coordinator Kliff Kingsbury bolted for the Arizona Cardinals. USC faces an early-season slate that includes Fresno State, Stanford, Utah, and Washington. We’ll know where Helton stand by mid-October.”

The Obvious: And finally, it’s not surprising at all to read the negative national and team assessments regarding the 2019 Trojans, as painful as it may be.

The Not So Obvious: Perhaps Athlon and Street & Smith’s are just setting the tone for the balance of college preview magazines to come as it pertains to the Trojans. One thing is clear: Last season’s 5-7 record, no bowl game, and a head coach on the hottest of hot seats sets up this wave of magazine scrutiny for the 2019 season.