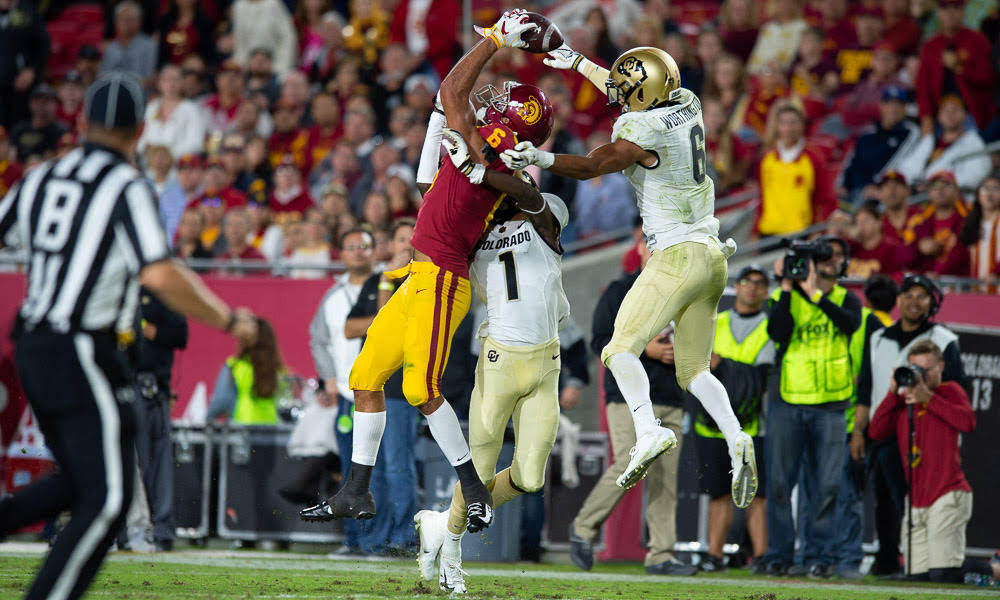 The Obvious from Boulder: Continuing its drive to a Pac-12 South Division title, the USC Trojans (4-3, 3-1 Pac-12 South) control their own destiny and hope to enhance their divisional pole position when they travel to play a struggling divisional foe,  the University of Colorado Buffaloes (3-4, 1-3 Pac-12 South), on Friday night (7 pm MT/6 pm PT) on Folsom Field.

The Not So Obvious: The flies in the cardinal and gold ointment? How about the fact that the Trojans are thus far a perfect 0-3 on the road, and Clay Helton’s ominous road record should be a concern even though all logic says the Trojans should, under “normal circumstances,” outpoint the self-destructing Colorado Buffaloes. There is also nothing normal about USC’s inordinate amount of suddenly mounting injuries, which could really be a threat to derail the Trojans’ goal of winning the Pac-12 South Division. Those injuries could not only affect Friday night’s game result but linger through the big game the following week against No. 11 Oregon in the Coliseum.

The Obvious: The Trojans opened a 10-point favorite to defeat Colorado.

The Not So Obvious: The Trojans have won all 13 of its meetings with Colorado while outscoring the Buffaloes, 450-189. Troy is 6-0 against the Buffaloes in Boulder games.

The Not So Obvious: The ESPN2 broadcasters will be Dave Flemming (play-by-play), Louis Reddick (analyst) and Paul Carcaterra (sidelines).

The Trojans’ overall KABC AM 790 broadcast from Colorado on will begin with a two-hour pregame show at 4:00 p.m. (PDT). Joining the pregame broadcast crew will be Jason Schwartz, former Trojans’ quarterback Max Browne, and Julia Adams. Following the game, there’ll be a two-hour post-game show.

The Not So Obvious: The Colorado broadcast can be heard on flagship station KOA NewsRadio (850 AM/94.1 FM) Mark Johnson (play-by-play), Gary Barnett (analyst), and Andy Lindahl and Bobby Pesavento (sideline).

Friday’s game will also air on Sirius XM satellite radio (channels 84/84 or online channel 84) and on the Tunein Radio app.

The Obvious: Friday’s Boulder weather forecast calls for sunny with a high of 60 degrees, low of 42 degrees, 49 percent humidity, and 0 percent precipitation. Temperature for kickoff is expected to be clear and 48 degrees (feels like 46).

Offensively, we’ll see whether last weekend’s sensational debut of Trojans’ electrifying true freshman running back Kenan Christon against Arizonacontinues against the Buffaloes. It may have to considering that redshirt freshman RB Markese Stepp is out three to five weeks with a surgically repaired ankle ligament, junior RB Stephen Carr has a hamstring injury, and junior RB Vavae Malepeai is out indefinitely after knee surgery. Things are so dire that hoping to spell Christon on Friday night will be former junior walk-on Quincy Jountti, who fumbled the first time he carried the ball against Arizona. Joining Jountti in a backup role is former RB-turned-DB Dominic Davis, now a senior, who has been returned from defense to running back. The timing of it all couldn’t have come at a worse time in the season, especially with Oregon looming on the horizon in two weeks.

As for Trojans’ quarterback Kedon Slovis, who is healthy, he has rebounded nicely from his concussion issue from the Utah game. Slovis is showing greater awareness of moving around the pocket and even getting out of the pocket and running if that is the best option. Of course, it will be interesting to see whether the Colorado defense first will try and stop Trojans’ senior wide receiver Michael Pittman Jr. as did BYU and Notre Dame did. We’ll find out whether the Trojans’ offense can take advantage of a Colorado defense that is in the national bottom 20 in total defense, scoring defense and pass defense. ILB Nate Landman ranks eighth nationally in tackles, FS grad student Mikial Onu is fifth in the country in interceptions and senior OLB Nu’umotu Falo Jr. leads the nation in fumble recoveries.

Defensively, we’ll see whether the Trojans defense can control veteran senior CU quarterback Steven Montez and a running attack led by TB Alex Fontenot, while leading receivers include WRs Tony Brown, a senior,and explosive junior WR Laviska Shenault, a 2018 All-Pac-12 first teamer. Shenault is sort of a wild card not because of his ability but his ability to stay healthy. If healthy, Shenault is one of the better athletes in the country.

Defensive personnel questions for the Trojans will be whether DC Clancy Pendergast has a suitable replacement for tremendous true freshman DE Drake Jackson (ankle), and whether inside linebacker coach Johnny Nansen gets sophomore inside linebacker Kana’i Mauga to perform like he did against Arizona as a replacement for injured sophomore starter Palaie Gaoteote, who is out with a high ankle sprain. We’ll find out whether the Trojans’ young and experience secondary can continue to make progress after a surprisingly good game against Arizona. In the long run, however, one has to wonder whether the current loss of Trojans’ sensational sophomore strong safety Talanoa Hufanga (shoulder) will finally become a major liability. With defensive end(s) Jackson out for Colorado and Christian Rector (questionable), we’ll see whether their probable replacements, Hunter Echols and Caleb Tremblay, can do the job on Friday night. It should be noted that Tremblay appears to be playing his best ball as a Trojan. As for the Trojans’ secondary, it appears the Greg Burn’s unit has good but potentially cautious news. Sophomore corner Olaijah Griffin returns from a back issue and Helton says that Isaac Taylor-Stuart is ready to go at the other corner spot, as will nickel Greg Johnson. However, we’ll see whether freshman Chris Steele is able to go after “tweaking” a knee during practice this week.

On Trojans’ special teams, we’ll find out whether the weather is a factor for both Trojans’ placekicker Chase McGrath and punter Ben Griffiths. As for the Buffs, junior CU placekicker James Stefanou, a 32-year-old Australian, is fifth on CU’s all-time field goals list.

The Obvious: Clay Helton is the Trojans’ fourth-year head coach and his current record at USC is 39-23.

The Not So Obvious: Regarding Colorado, Helton says, “This team has always been a great home team. Every time we’ve gone there it’s been a fistfight. They’ve had two tough road losses, two places I don’t envy anybody who has to go to Pullman, Washington, and Eugene, Oregon, two tough places to play. They’re back at home, and I still think they’ve got a really good quarterback in (Stephen) Montez and when you look at the receiver (Laviska Shenault), one of the best in the country for what he does. Defensively, I’ve always thought that Mel (Tucker) is a defensive coach by trade and has done a wonderful job everywhere he’s been, the NFL, he knows defense.”

The Obvious: Mel Tucker, 47, is in his first season as Colorado’s head coach.

The Not So Obvious: Even though the Buffs are just 1-2 at home this year and are coming off back-to-back conference road game defeats (Oregon and WSU), Tucker said, “It’s really good to get back home, our crowds have been strong. We’re one of the few places in America that has it packed out every game and that’s what I remember about this place when I played against the Buffs way back when I was in college (at Wisconsin). That was my last memory of CU, just seeing a crazy crowd packed in there, 50,000 strong. The noise just never escapes, Ralphie running and a damn good football team out there. That’s what I remember and that’s what it’s been this year.” As an added note, in three games, the Buffs have drawn an average of 51,560, with two sellouts.

The Obvious: The Trojans offense averages 30.71 points while the Colorado defense allows 34.86 points per game.

The Not So Obvious: Colorado’s offense averages 25.67 points per game while the Trojans’ defense allows 24.00 points per outing.

The Obvious: Friday will mark the second Friday night game of the season.

The Not So Obvious: The last time USC played a pair of regular season Friday games, as it does this year, was 1977.

The Obvious: The starting quarterback for Colorado is senior Steven Montez (6-5, 225).

The Not So Obvious: Montez is second on CU’s career charts for passing yardage (8,564), completions (718) and total offense (9,406) and third in TD passes (56). His father (Alfred) was a college quarterback at Texas Tech and Western New Mexico and played one season in the NFL with the Oakland Raiders (1996).

The Obvious: As listed above, it’s expected to be cold by the time the game kicks off in Boulder.

The Obvious: Josh Falo is a junior tight end for the Trojans.

The Not So Obvious: Josh’s brother, Nu’umotu Falo Jr., is an outside linebacker for Colorado.

The Obvious: The Trojans have no players from Colorado.

The Not So Obvious: Colorado has 40 Californians on its roster.

The Obvious: There is nothing more exciting for a USC football player than to celebrate his birthday on the day of a game.

The Not So Obvious: Trojans redshirt freshman corner Isaac Taylor-Stuart will celebrate his 20th birthday on Friday night against the Buffaloes.

The Obvious: And finally, if the Trojans are planning on keeping their important South Division tiebreaker with Utah, they need to win on Friday night with Colorado.

The Not So Obvious: Making things even more important at Colorado, the Trojans will host nationally ranked Oregon next Saturday night in the Coliseum, which makes a win over the Buffaloes even that much more critical.