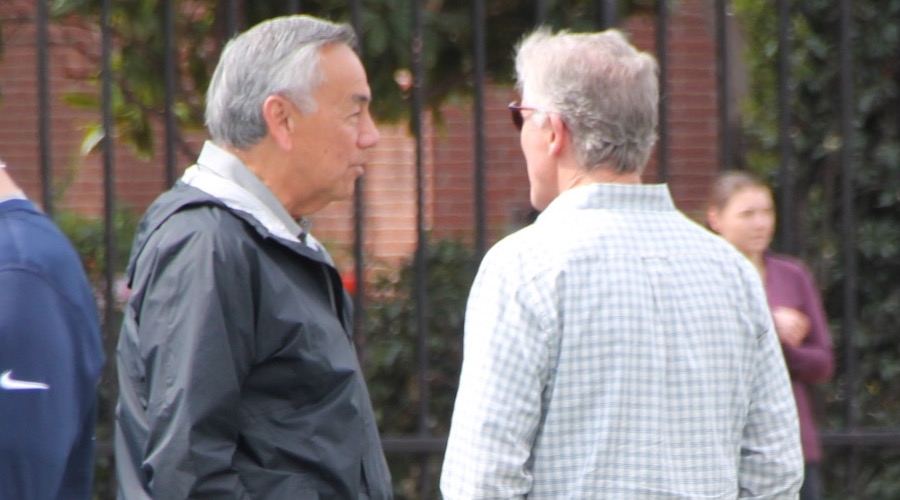 The Obvious: The hiring of Kliff Kingsbury as USC Trojans offensive coordinator and quarterback coach has already brought comparisons of Norm Chow (photo above on left), the Trojans’ highly successful former OC and QB coach during the early national championship successes of the Pete Carroll (photo above on right) USC era.

The Not So Obvious: The Kingsbury hiring and parallels to legendary Norm Chow certainly cause Trojans’ fans to stand at immediate attention. Many are referring to Kingsbury’s offensive concepts – first introduced to the new Trojans’ OC when he was the starting quarterback at Texas Tech under former Red Raiders’ head coach Mike Leach, now the highly successful head coach at Washington State – as Chow 2.0. Chow was a chess master compared to most of his adversarial defensive coordinators, most of whom were plain chess players.  For those Trojan purists that were raised on power football, student-body right becomes a melancholy memory, but when you check the finals stats of Kingsbury as head coach at Texas Tech, Kingsbury does run the ball much more than his mentor, “Leach the Pirate,” and effectively.

The Obvious: After quarterback Sam Darnold left the Trojans early for the NFL, Clay Helton’s offensive system identity – or lack thereof – was put into question to the point where many experts were saying the Trojans didn’t have a system or a coach capable of play-calling that system into success.

The Not So Obvious: Well, the Trojans will now have an “offensive system,” and somebody who knows how to use it. The Trojans will now have a system that fans will understand, especially with Kingsbury calling the plays. The excitement level, combined with the current offensive talent on hand, should be rewarded with some bigtime offensive explosions. The key will be Helton letting Kingsbury do his thing. The major component or watchdog to ensure that Kingsbury earns his big contract will be the man that is paying the new OC and QB coach, USC athletic director Lynn Swann. It would be shocking if Swann doesn’t monitor the Helton/ Kingsbury relationship with intense scrutiny.

The Obvious: Clay Helton’s pleasing, reassuring, and non-threatening Southern personality has been perhaps his most positive, consistent characteristic.

The Not So Obvious: However, from this point on, Helton’s personality will no longer be political capital in his future as USC head coach. It’s now all about win, baby, and now! That admired personality trait won’t get him past 2019 if he has another 5-7 season. No doubt, hiring Kliff Kingsbury is a great bridge to next season. However, there are still a number of big issues still needing to be addressed like culture, discipline, and systemic challenges, which puts the spotlight on defensive coordinator Clancy Pendergast. It’s no secret that Pendergast will be under scrutiny to upgrade his side of the ball substantially. With the type of offense the Trojans will be running, chances are the defense will probably see more time on the field than Pendergast would probably like and probably Trojans fans would like. As per the old saying, “Offense scores points, defense wins games.”

The Obvious: No true “Air Raid’” offense has ever won a national championship.

The Not So Obvious: There’s no getting around it, no matter how exciting and high scoring the offense figures to be under Kliff Kingsbury, the evidence suggests that to win a national title, all roads will still run through physical defensive teams like Alabama, Ohio State, and Notre Dame. The SEC defenses have made a habit out of spitting out “finesse” passing offenses, and the Trojans will be tested physically next season when they travel to BYU, Washington, and Notre Dame – not to mention home games with Stanford and Utah. Given last season’s outcome, the Trojans should first begin their goals by winning the Pac-12 South and take it from there.

The Not So Obvious: In case you missed it, Fresno State defeated Boise State 19-16 in overtime for the Mountain West championship and a spot in the Las Vegas Bowl. Head coach Jeff Tedford has rejuvenated Fresno State (11-2) to the point that next season’s opener with the Trojans figures to be one tough game for the cardinal and gold but an intriguing game, as well. Had Trojans’ athletic director Lynn Swann not elected to give Clay Helton another year, it’s likely that Tedford would have at least been in the conversation as a head coaching candidate.

The Obvious: Clay Helton will still be on the hottest seat in the nation come the 2019 season.

The Not So Obvious: Not that you’d like to think about it, but can you imagine if Fresno State upsets Helton’s Trojans in the season opener? Come to think about, does anybody want to even think about it? Certainly not Helton or Lynn Swann. With a very difficult schedule next season simply by playing at BYU and Notre Dame, and Oregon and Washington being added to the conference schedule, the Trojans will have their work cut out, especially against the Huskies in Seattle.

The Obvious: The All-Pac-12 football team was announced early this week, and there were no Trojans named to the first-team on offense, defense, or special teams.

The Not So Obvious: The last time the Trojans had no first-team all-conference selections was 2000, the season in which Paul Hackett eventually got fired.

The Obvious: Although there were no first-team All-Pac-12 Trojan selections, there were five second-team selections.

The Not So Obvious: The second-team Trojans’ were led by senior ILB Cameron Smith, senior OLB Porter Gustin, senior CB Iman Marshall and redshirt freshman DT Jay Tufele. Senior RT Chuma Edoga was the lone offensive selection. This is what happens when you have a 5-7 record compounded with 4-5 conference record.

The Obvious: And finally, Kansas State coach Bill Snyder, 79, has announced his retirement.

The Not So Obvious: The legendary Snyder was once an assistant for Trojans Hall of Fame coach John McKay back in 1966. For the record, McKay’s 1966 team went 7-4 but came in first in the conference. That team lost a dramatic Rose Bowl against Purdue 14-13 as a Trojans’ two-point conversion attempt was intercepted by Purdue’s George Catavolos in the end zone. FYI, the Trojans’ captains for that season were WR Rod Sherman and DB Nate Shaw.