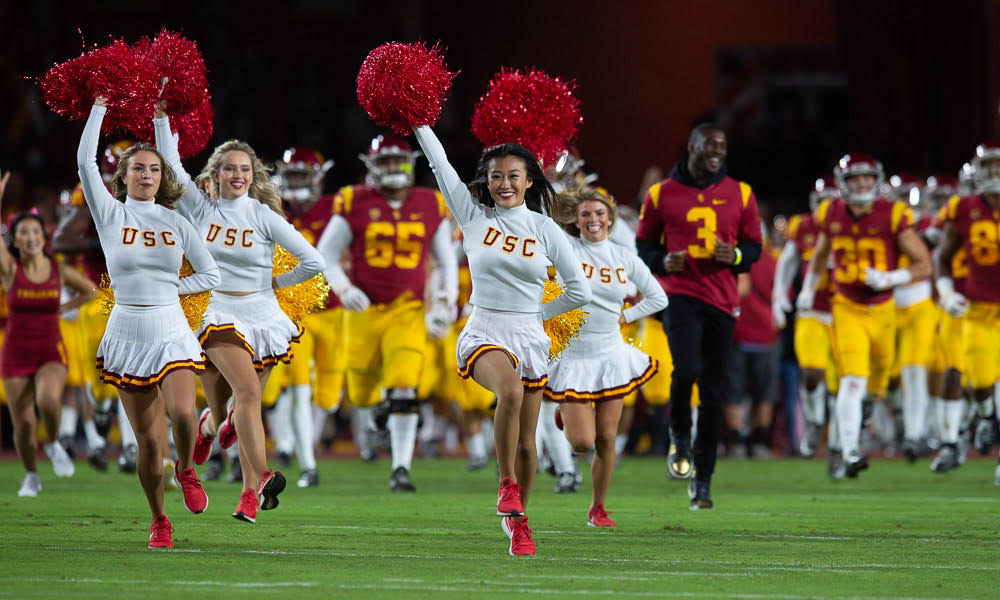 The Obvious from Los Angeles: Going from near flatline chances of being in the Pac-12 South Division race after dropping earlier games at Utah and Arizona State, the USC Trojans (5-4 overall, 4-3 Pac-12 South) have a heartbeat in the whacky South Division race, thanks to last weekend’s ASU upset of Utah. However, if the Trojans – now in a four-way South Division tie with the Utes, Sun Devils, Arizona in the loss column – hope to pull off a division comeback, the first order of business is to defeat the Cal Bears (5-4, overall, 2-4 Pac-12 North) this Saturday evening (7:30 p.m. PT) in the Los Angeles Memorial Coliseum.

The Not So Obvious: Here’s what you need to know at the moment. The Trojans need to win out against Cal and next Saturday at UCLA, and for Utah and ASU each to lose a game. With precious few conference games remaining, the chances of both the Utes and Sun Devils losing a game are probably 50-50, which is doable. The Utes, now without star quarterback Tyler Huntley (broken clavicle) and star running back Zack Moss (knee) for the season, host Oregon on Saturday and then play at Colorado (Nov. 17). As for ASU, they host UCLA on Saturday and then the following two weeks play at Oregon (Nov. 17) and at rival Arizona (Nov. 24). The fate of the Trojans could be held in the web feet of the Oregon Ducks. The Trojans hold the tiebreaker with Arizona, but ASU and Utah hold the tiebreaker over the Men of Troy. With wins over the Trojans and Utah, ASU controls its own destiny. Got all that?

The Not So Obvious: By having the game late at night, it will certainly provide students, faculty, alumni, and fans to spend the day on campus before attending the game. You can bet being the Trojans’ homecoming opponent won’t escape Cal’s bulletin board. In homecoming games, the Cardinal and Gold have a 63-26-4 record dating back to the first such event in 1924 (not including one win vacated due to NCAA penalty; original record: 64-26-4).

The Obvious: The Trojans opened a 5 ½ -point favorite over Cal.

The Not So Obvious: The Trojans have not lost to Cal since 2003 and have won eight in a row over the Golden Bears in the Coliseum. This will be Troy’s 106th meeting with Cal, the team the Trojans have played more than any opponent. The Trojans lead the series with California 69-30-5 (not including Troy’s 2005 victory that was vacated due to NCAA penalty; original record: 70-30-5).

The Obvious: Saturday night’s game will be televised on ESPN (7:30 p.m. PDT).

The Not So Obvious: The ESPN broadcasters will be Adam Amin (play-by-play) and Rod Gilmore (analyst) and Quint Kessenich (sidelines).

The Not So Obvious: The Cal broadcast can be heard on flagship station KGO 810 AM with the legendary Joe Starkey (play-by-play), Mike Pawlawski (analysts) and Todd McKim (sidelines).

The Obvious: Saturday’s Los Angeles homecoming weather forecast calls for sunny with a high of 78 degrees, low of 50 degrees, 16 percent humidity, and 0 percent precipitation. Kickoff temperature is expected to be 61 degrees and clear.

The Not So Obvious: The real weather report is whether the Trojans 38-21 win last weekend over a determined Oregon State team (last in the Pac-12 North) was an indication that with Clay Helton calling the plays and Tim Drevno now coaching the offensive line made a difference against a Beavers’ defense that was last in the Pac-12 in both run and pass defense. The Trojans will get a better idea of their “improved” offense when it faces a respected Cal defense that did a pretty good job of defending Washington State’s potent offense in a tough 19-13 loss up in Pullman last Saturday night.

Offensively, we’ll see whether last week’s running game explosion was due to Clay Helton calling plays or Oregon State just having the worst run defense in the Pac-12. Maybe more of the later than the former. However, it appeared that the blocking was crisp and the aggression more pronounced. We’ll find out whether this sudden running attack resurgence can continue against a very tough and physical Cal defense, which will certainly try and stop the Trojans’ ground attack and force true freshman quarterback JT Daniels to air it out. Daniels will be doing so without the services of standout junior Michael Pittman Jr. who is out with a shoulder injury. Cal’s defense ranks third in the Pac-12, and the Bears’ secondary statistically (184.2 avg.) ranks at the top of the conference. We’ll see whether the Trojans’ offensive line can protect Daniels against a forceful defense and whether the loss of Pittman plays into the Cal defensive game plan. It all could put additional pressure on the Trojans’ supports receivers to play a bigger role. One player to note was the emergence of true freshman Devon Williams, who led the Trojans last weekend in Corvallis. One thing we do know, it’s not a question whether the Trojans running backs can be highly effective. It’s a question whether the O-line can open holes big enough for the back to get to the second level. If you watched Trojans senior running back Aca’Cedric Ware and sophomore Vavae Malepeai do their thing against Oregon State, you know there is potential to control the game offensively. On a downer note, Trojans’ running back Stephen Carr is out due to an ankle injury suffered at Oregon State. Because the Cal offense is not very potent, there will be a lot of incentive for the Bears’ defense to keep it close. We’ll find out whether Cal’s defense, which is in the Top 25 nationally in total defense, pass defense and pass efficiency defense can stuff the Trojans’ offense. Cal defensive leaders are senior inside backer Jordan Kunaszyk and junior inside backer Evan Weaver (both are in the national Top 20 in tackles) and junior safeties Ashtyn Davis and Jaylinn Hawkins.

Defensively, we’ll find out whether the Trojans’ can shut down completely a Bears’ offense that currently looks pretty mediocre at best. Quite frankly, while the Trojans defense showed a lot of issues for the first three quarters at Oregon State, it’s defensive coordinator Clancy Pendergast’s hope is that his defense plays like it did in the fourth quarter against the Beavers. If the Bears’ offense is able to move effectively against the Trojans’ defense, the chances of Cal escaping Los Angeles with a victory is greatly increased. We’ll see whether Cal chooses to attack a Trojans secondary, led by senior Marvell Tell lll, can eliminate penalties and general breakdowns. A key will be the availability of senior CB Iman Marshall (foot/ankle sprain). We’ll also see whether the injuries and defections are finally catching up with the Trojans’ secondary and whether Cal will take aim at the Trojans’ degrading of talent. One emerging bright spot has been the play of senior corner Jonathan Lockett, who has really come on off the bench. We’ll see whether Bears’ senior RB Patrick Laird, who is closing in on his second consecutive 1,000-yard rushing season, can be stopped by the Trojans’ defensive front. One Trojans’ D-liner who continues to impress is redshirt freshman Jay Tufele. We’ll also find out whether the Trojans secondary can contain Cal senior WR Vic Wharton III who is the Golden Bears’ top pass catcher. The Bears also feature two young quarterback in redshirt freshman Chase Garbers and sophomore Brandon McIlwain. Both are threats as throwers and runners, and they have been splitting time at quarterback. We’ll see whether a two-quarterback system presents a challenge to the Trojans’ defense.

The Obvious: The Trojans’ offense is averaging 28.33 points per game while the Cal defense is allowing 21.89 points per outing.

The Not So Obvious: Asked about the Cal defense, head coach and play-caller Clay Helton said, “I’ve always thought that good defenses are built down the middle. When you look at Chris Palmer, Evan Weaver and Ashtyn Davis, that nose, that mike and that free safety are three of the top players in our conference right now. It’s no wonder you look up and they’re one of the better defenses in our conference.”

The Obvious: The strength of the Cal team is its defense.

The Obvious: Justin Wilcox is in his second season as the Cal head coach.

The Not So Obvious: Regarding the Trojans, Wilcox said this week, “They’re extremely talented across the board. They have good schemes. We know it’s going to be a battle. A lot of our guys know a lot of their guys from playing against them in high school a lot of times. We have a ton of respect for them. They’re a heck of a team.”

The Not So Obvious: In this week’s prediction regarding Cal at USC, Wilner writes, “The over/under is only slightly larger than the total number of points scored in Cal’s past two games (54). In all, the Bears have gone under in seven of eight vs. FBS opponents. Comment: Heavy legs and USC’s (possibly) (seemingly) improved running game make this a challenge for Cal’s defense. Cal’s offense also makes it a challenge for Cal’s defense. Close for three quarters, then USC takes charge. Pick: USC.”

The Obvious: College football was once played consistently in the afternoon.

The Obvious: The Trojans have eight players from Bay Area schools.

The Obvious: The Trojans have played over 1,000 games in its storied football history.

The Not So Obvious: In fact, the Trojans have played 1,251 games in its history and only twice—when Troy snapped No. 1-ranked California’s 38- game regular season unbeaten streak in 1951 at Berkeley and in 2012’s loss at Stanford—has the final score been a very football-like 21-14 (win or lose).

The Obvious: Saturday’s game is being played on Nov. 10.

The Not So Obvious: Cal has an enrollment listed at 30,853 undergraduate students.

The Obvious: And finally, there will be the usual Trojans’ recognitions during the game and at halftime.

The Not So Obvious: Recognitions include the aforementioned Homecoming/Reunion Weekend, a pregame flyover featuring Navy F/A-18 Hornet planes, and recognition of the Trojans’ national championship baseball teams of 1948, 58, 68, 78, and 98.