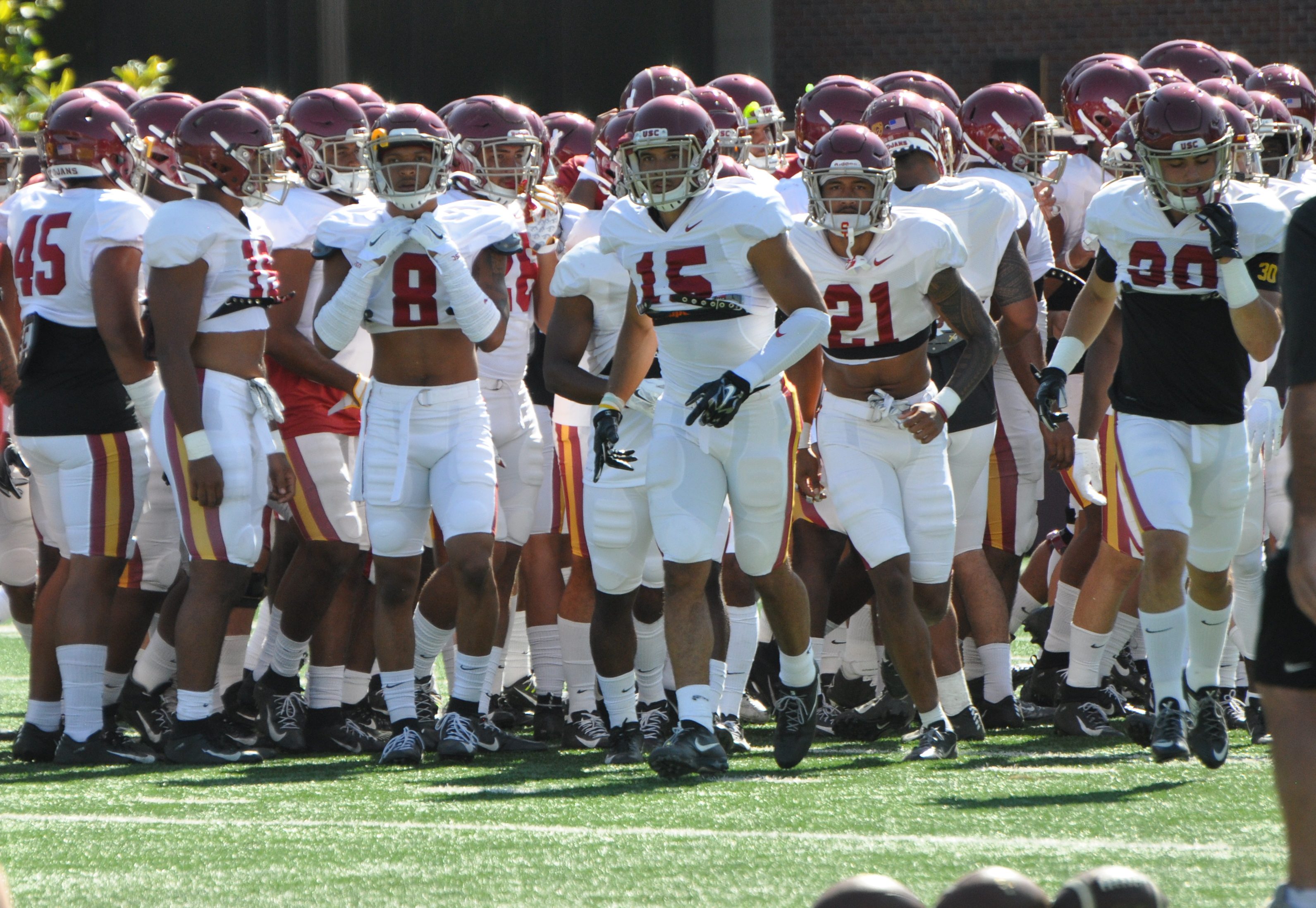 The Obvious: The USC Trojans (3-2, 2-1 Pac-12) spent this week working on fundamentals and cleaning up the mistakes that may or may not have contributed to the 28-14 loss at Washington.

The Not So Obvious: The O/NSO would like to confirm that practice activities are leading to improvements, but as you know, the media isn’t allowed to see much of practice. Well, unless you think watching the first 20 minutes of calisthenics gives deep insight. One can only surmise what is happening in practice by talking to players and coaches afterward and even then, they can be guarded with their answers. The O/NSO hopes that the Trojans learned something from Washington defensive game plan against them and used this week to make the necessary adjustments. UW head coach Chris Petersen may have done the Trojans a favor on what to work on this week on both sides of the ball. After all, it would be shocking if other Pac-12 teams didn’t take a good chunk of at least the UW defensive strategy and employed it into their game plan in some manner. If those upcoming defensive coordinators from the opposition don’t do some sort of copycat of the UW defense, their position should be under scrutiny.

The Obvious: Despite the loss to Washington, Trojans’ head coach Clay Helton still maintains an ultra-positive outlook for the balance of the season, still insisting this will be a special team when it’s all said and done.

The Not So Obvious: Not to belabor the point, but we’ve heard such optimism from Helton before and after Trojans wins and losses. Gentleman Clay told us early in the 2018 season that Trojan fans would be very excited and proud of their team when November arrived, and you know how that went. Okay, fast forward to this season after the BYU overtime loss. Again, fans and media are told this is again going to be a special team. Sounds good, but the proof is in the pudding. At 3-2 overall and 2-1 in the 2019 Pac-12, the Trojans have a winning record and remain in the South Division hunt, but that record holds up thanks to a surprising 30-23 upset of Utah a few weeks ago.

Having lost two of their last three games and with Notre Dame coming up in South Bend, the Trojans will be hard-pressed to return to L.A. with a victory, which would mean after the first half of the season, the Trojans’ record would be 3-3. Again, holding the O/NSO accountable, unless the Trojans can pull a major upset in South Bend, a 3-3 record will be in the offering after six games, a game better than we predicted, which was 2-4 after the first 6 games. But who’s counting, right?

The Obvious: The O/NSO is now predicting – based on the up-to-date info of the final six opponents of 2019 – the second half of the season may be more challenging than the first 6 games.

The Obvious: If the Trojans tie Utah at the end of the conference season, the Trojans would win the Pac-12 South.

The Not So Obvious: The Trojans are currently in third place in the South Division with a 2-1 record, behind Arizona and Colorado, both of whom are 1-0. Not a big margin and neither Arizona nor Colorado have played Utah yet. However, the Trojans can ill-afford any additional South Division or overall Pac-12 losses, which could negate the advantage win over the Utes.

The Obvious: There appears to be a groundswell of grumbling over Graham Harrell’s version of the Air Raid offense and its tempo.

The Not So Obvious: Whenever the Trojans’ offense scores just two touchdowns, questions are going to be raised over the style of offense. Washington was basically daring the Trojans to run, and the USC ground game did account for 212 yards. However, should the Trojans have taken even more liberty against the UW defense by running the ball even more? The O/NSO definitely thinks so; the Trojans should have gone to the ground game even more. The fact that Washington played a majority of its defensive secondary in zone coverage – thus taking away the Trojans’ man-on-man advantage – played a huge role in keeping Troy’s talented receivers restricted.

The Not So Obvious: In a somewhat serious but comical remark concerning how the Trojans’ offense is being defensed, Graham Harrell said his offense has played well when opponents have allowed it. Gee, imagine that. The Trojans offense has done well when the opponents have allowed it. The O/NSO can just imagine Notre Dame having its defensive coordinator call down to the field to his defensive captain, and he goes into the huddle and says, “Coach wants us to let the USC offense make a big play this series!”

The Obvious: The big thing in major league baseball is the strategy of “shifting” the defense to match a hitter’s strengths.

The Not So Obvious: It’s head scratching in baseball to understand why major league hitters just don’t hit to the opposite field when there is only one defender on one side of the infield. It’s there for the taking. Using a football comparison, if a defense has only three down linemen and the linebackers are basically playing the pass, why not give the ball more to the running backs and make the defense change?In terms of the USC offense, when teams like Washington and BYU play three down linemen, running the ball is the most logical thing to do. No brainer, right?

The Obvious: Quarterback Kedon Slovis and strong safety Talanoa Hufanga have returned to practice but have not be cleared for contact after being held out of the Washington game due to concussion protocol.

The Not So Obvious: It’s been said that if Slovis is healthy, he starts against the Irish. However, you can bet the Irish will be looking to rough up Kedon early and often. It could be interesting against the Irish if Graham Harrell senses that Slovis is not consistently moving the offense, would he turn to Matt Fink to see what he can do?

The Obvious: Against Washington,running backs Markese Stepp and Vavae Malepeai tied for the number of carries with 10 each.

The Not So Obvious: Give the Trojans coaching staff credit for FINALLY using Stepp in quality time, but the kid needs more carries. Stepp’s style helps an average offensive line appear to be more productive than it is. If a team has three defensive linemen and you have five offensive linemen, you should be productive on the ground. With Stepp, who also flashed the ability to be a breakaway threat with his 35-yard spring against the Washington defense, the redshirt freshman’s style can be a major help to the Trojans’ ground game the rest of the way.

The Obvious: Normally, getting Notre Dame game tickets in South Bend for the USC game can be a tough and an expensive proposition.

The Not So Obvious: Apparently not this season. If you go to the ND athletic site and click on tickets, there are a surprisingly a good number of tickets still available with a choice of price levels. The only rub is that you can only purchase up to four tickets at a time.

The Obvious: Trojans’ head coach Clay Helton continues to follow his road philosophy of not having his team do a visitor’s day-before-game “walk thru” at the visiting stadium.

The Not So Obvious: Remember when Helton told us how he took his team in the Coliseum before this season so the freshmen and newcomers wouldn’t be so “wide-eyed” on game day with the Coli surroundings? Gentlemen Clay felt with the new Coliseum additions, it made sense for his entire team to get a feel for the new place. If the coach was so concerned about his team being wide-eyed in its own stadium, why would that not apply to road games – especially with the upcoming game at historic Notre Dame Stadium? You talk about being “wide-eyed” and in awe, few stadiums can engulf a visiting team, especially freshmen, faster than that of ND’s home venue.

The Obvious: And finally, Dave Roberts is the Trojans’ “interim” athletic director.

The Not So Obvious: After the Trojans’ loss at Washington, Roberts was seen leaving the USC visitor’s locker room. A former all-star offensive tackle himself at UC Davis, no doubt the “AD” was checking the “pulse” of the team after a difficult conference defeat.