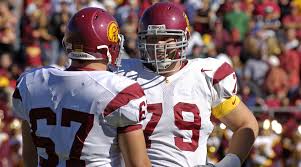 The Obvious: It is hard to believe, but did you ever think in the history of USC football and its glorious decade-after-decade of All-American offensive linemen the time would come when one the biggest question marks for 2019 is – again – the offensive line?

The Not So Obvious: When USC is traditionally dominate on offense, it generally has a very good to great offensive line, which is usually led by one or more of college football’s most studly offensive tackles. In fact, look at the long list of celebrated USC offensive tackles, and it’s really hard to pick just two for an all-time Trojans’ team. In this week’s USC All-Time weekly voting poll, voters are being asked to select the greatest two offensive tackles in USC history. Now, the O/NSO – called an historian due to our advancing age – has seen every offensive tackle in person, practice, or games since 1962. That’s a lot of O-tackles to watch. Now we freely admit our favorite unit in all these years of watching the Cardinal and Gold has been the USC O-lines. Naturally, we’re not offended if offensive linemen – tackles in particular – don’t stimulate your interest like a quarterback or tailback. No offense taken. However, here are our nominees for consideration in the voting process and some video to help make you a better informed voter.

The Obvious: Can any USC list offensive tackles not start with the legendary Ron Yary, the pride of Bellflower, California?

The Not So Obvious: Ron Yary (1965-67) defines the term “All-American.” No. 77 is the only Trojan in history to be an Outland Trophy winner (1967) for the Men of Troy. Considered big in those days, Yary (6-5, 245) was the real deal and to this day commands respects wherever he goes. A member of both the NFL and College Football Hall of Fame, our vote for one of the two tackles on the WeAreSC All-Time Team goes to this legend. So, how did such a legend come to USC? Watch and learn: https://www.youtube.com/watch?v=3_-CcR7TZfg

The Obvious: No all-time list of USC tackles can’t be considered without beginning or near the top without the name Anthony Munoz (1976-79).

The Not So Obvious: Talk about a star-crossed cardinal and gold career. The O/NSO first saw Anthony (6-6, 280) on the basketball court during his senior season at Chaffey High School. It was like watching a giant grizzly bear on roller skates. His agility and feet were just stunning. Not only was he an excellent basketball player, but he was an intimidating baseball pitcher, as well, eventually a member of USC’s 1978 national championship baseball team. That was the kind of athlete this prep All-American was. Ironically, he never made All-America in football due to a series of horrendous knee injuries over his cardinal and gold career. In fact, he only made all-conference once (1978). A member of the Pro Football Hall of Fame, Anthony played in only 16 combined games his junior and senior season at Troy because of those knee injuries. Had he been healthy, Anthony probably would be in the College Football Hall of Fame today: Here is Anthony in his own words describing his star-crossed USC senior season: https://www.youtube.com/watch?v=onyV_QIJeZM&t=58s

The Obvious: One of USC’s greatest offensive tackles was a guy with a simple but furious name…Ron Mix.

The Not So Obvious: Mix (1957-59) is probably the least known of the super offensive tackles by today’s generation. However, Ron (6-4, 245) is a legendary tackle and is a member of the Pro Football Hall of Fame. Mix, a graduate of Hawthorne (Calif.) High, is also in the Los Angeles Chargers Hall of Fame. And, yes, he is also in the USC Athletic Hall of Fame. A 1959 All-American, Ron was known for his physical style of play along with a lot of smarts – he later went on to become a lawyer. With all his athletic greatness, Mix was also known for his stance in Civil Rights and fighting for racial equality. If you need some more voters information, here’s some supplemental material: https://www.youtube.com/watch?v=JKlrdLBBg7Q

The Obvious: There is no question that one of Troy’s legendary tackles was the man out of Colorado named Tony Boselli.

The Not So Obvious: Tony Boselli (1991-94) was a two-time All-America tackle that didn’t play on some of USC’s greatest teams. However, his individual exploits are jaw dropping. One of the many standout out-of-state recruits (Colorado), Tony is a member of the All-Century Pac-12 team as selected by a conference media poll and stands besides other Trojan tackle greats like Ron Yary and Anthony Munoz. A member of the College Football Hall of Fame, it seems like only a matter of time before he is voted into the Pro Football Hall of Fame. So athletic for his size (6-8, 305), his skills set was almost freakish. Here is the draft evaluation of former Jacksonville Jaguars head coach Tom Coughlin: https://www.youtube.com/watch?v=cG8my9ONrGE

The Obvious: If you followed the Trojans during the mid-1970s, the offensive line name that would always come up was that of tackle Marvin Powell (1974-76).

The Not So Obvious: Another of the great out-of-state recruits (Fayetteville, North Carolina/Seventy-First St. HS), Marvin was a two-time All-American and three-time all-conference pick. He is a member of the College Football Hall of Fame and played a number of seasons in the NFL. After football, he became an attorney. Another O-lineman who merged his physicality and his mind; he was in every essence one of the Trojans’ greatest all-time tackles. During his time at Troy, the Cardinal and Gold went 29-6-1, and he was part of the 1974 national champions. His son, Marvin lll, was a fullback for the Trojans. Here is Marvin Powell in the 1977 Rose Bowl game against Michigan. Marvin is wearing No. 76. We’ll even note for No. 76 as our second tackle vote https://www.youtube.com/watch?v=CML3NoJJwt8

The Obvious: Sam Baker was a three-time All-American during his tour of cardinal and gold duty (2005-07)

The Not So Obvious: Sam (6-5, 305) was a major cog in Pete Carroll’s offensive teams when it seemed that no defense could handle the USC offensive line. The agility of a basketball player – his dad, Davie Baker, was a college basketball star at UC Irvine – Sam took blocking to a new level. A first-round draft selection of the Atlanta Falcons (2008), his combination of physical skills, mental acumen for the game, and his overall smarts was a rare combination of skills. Sam was also a three-time All-Pac-12 selection.

The Obvious: And finally, there are other worthy O-line tackle candidates, and it’s almost a shame to leave somebody off the top-of-our-head list.

The Not So Obvious: One thing is for sure. The two offensive tackles voted to the WeAreSC.com All-Time Team will be worthy, but that doesn’t mean that others not making the final cut are not worthy. The competition is that debatable.