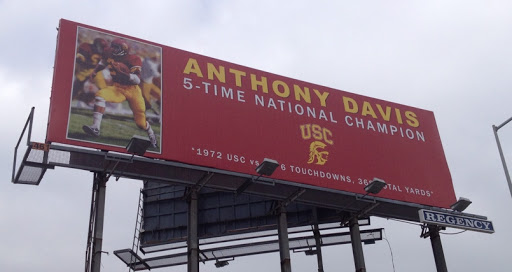 The Obvious: Until a series of inexcusable and incomprehensible actions, one of the most prolific USC football and athletic boosters of the last 50 years has been billboard advertising tycoon Brian Kennedy, whose name many associate with the Trojans’ practice field, which bears his name. It was Kennedy who provided the architects, financing, supervision, and passion to complete the 1998 much-needed project in just four months.

The Not So Obvious: The O/NSO is sure that Kennedy, who has not only been an exemplary financial contributor to USC athletics but an invaluable asset in terms of his foresight and moxie, is now well aware that a new highly competitive recruiting war is about to explode – namely “recruiting” billboards from various blueblood programs that feature current players and signed recruits. Awhile ago, Kennedy even used one of his Regency billboards (see cover photo above caption) in 2014 to highlight USC legendary running back Anthony Davis and his destruction of Notre Dame, which appeared alongside an L.A. freeway. Confused? Need some scrutiny? Read on.

The Obvious: There are two examples that come to mind regarding the budding billboard wars, which are positioned to explode. When the Trojans officially announced the signing of defensive end Korey Foreman, the nation’s No 1 recruit for the class of 2021, they immediately put Foreman’s picture and name with the message “I am staying home” on their highly visible electronic billboard sign, which sits atop the Galen Center and faces the heavy traffic of the 110 Freeway.

The Not So Obvious: At the time of the Foreman visual display atop the Galen Center, many sports followers of college football didn’t know quite what to make of the billboard, but they knew it was highly visible along one of L.A.’s most traveled freeway routes. Observers also weren’t quite sure what direction this new form of college athlete “advertising” was headed. Well, Notre Dame has strongly pointed the way in 2021, having taken billboard advertising to a whole new national level of play. Read on.

The Obvious: As written about in our last IMHO Sunday column, “Notre Dame has thrown down the branding and social media gauntlet by placing Irish football player(s) billboards around the country beginning with Chicago, Cincinnati, Dallas, Detroit, Indianapolis, Charlotte, Jersey City, New York City, Phoenix, and Los Angeles. The Irish LA billboard on the 405 Freeway shows a photo of former local Crespi High and walk-on receiver Matt Salerno in his Irish uniform and saying, “I’m from Los Angeles and I chose Notre Dame.”

The Not So Obvious: All of which takes us back to the name Brian Kennedy and his highly successful billboard advertising company, “Regency.” If there was ever a time when the Trojans could use a highly successful billboard media consultant, it would be former USC graduate Brian Kennedy. Trust the old O/NSO, there has been no more loyal and proven supporter of USC football and athletics than Kennedy. The former San Gabriel High grad and former college roommate of the late USC All-America wide receiver Hal Bedsole, if Kennedy ever needed a blood transfusion, he would demand it be colored cardinal and gold.

The Obvious: In recent years, USC and Brian Kennedy have not been bosom buddies, which is sad to say the least.

The Not So Obvious: Why USC and Kennedy haven’t been on the same page should be heartbreaking – for both parties. It’s a crime that one of the most loyal and active Trojans alumni has withdrawn from his lifelong love affair with USC, a tragedy that should never have happened. The parties involved obviously know what happened, but there has to be some way for reconciliation because it just shouldn’t end this way.

And FYI, Kennedy didn’t call the O/NSO and ask me to be an intermediary on his behalf to start a dialogue been USC and himself. We don’t do such things around here, and it isn’t our place to do so.

The O/NSO realizes USC is going through some sort of metamorphosis, but honestly, that metamorphosis should never have taken place to exclude a Brian Kennedy from the cardinal and gold world and for that matter B. Wayne Hughes, an alumni super booster, who is a tower of financial strength. Then there is the university disbandment of longtime loyal support groups, which many USC alumni call to this day a disgrace. Perhaps with good intentions, all of the aforementioned was done under the early tenure of Dr. Carol Folt.

The Obvious: It appears that USC president Dr. Carol Folt has systematically tried to gain much tighter control of powerful athletic boosters and support groups in order to have, in her eyes, a more disciplined, controlled, and organized university.

The Not So Obvious: It has been reported – fairly or unfairly – that Dr. Folt doesn’t like the idea of being “indebted” or “controlled” by mega-bucks athletic boosters. She sees it as the tail wagging the dog. What is true is that there is now a great distance or gap now between the super athletic boosters and USC.  Many once influential boosters feel as though they have been tossed aside and thrown under the bus like John McKay’s fabled I-formation. Certainly, there are no winners here but plenty of losers on both sides.

Obviously UNC football is not nearly on the same storied level as USC football, which most UNC boosters certainly wouldn’t argue. However, is the USC Board of Trustee as involved in football as the UNC BOT is with basketball? Dr. Folt might say that it’s easier to deal with the USC BOT and football in Los Angeles than the UNC BOT and basketball alongside Tobacco Road.

The strength of USC in the past has been its tight network of staff, alumni, awesome athletic school spirit, and unshakeable passion. That USC passion is now in serious question, and it has to be improved unless the powers that be don’t want it improved, which would be gut-wrenching and heartbreaking after all these many generations of athletic success. Aside from the inconsistencies or maybe they are inconsistencies of the current football program, a number of other athletic programs haven’t been consistent living up to the past championship levels, but that’s a conversation for another time. There’s the sense that AD Bohn is really trying to correct the situation.

The Obvious: During normal communication times, nobody would be more excited to jump into the billboard wars – especially against Notre Dame – than Brian Kennedy, affectionately referred to by his plethora of friends as “BK” or “Beek.”

The Not So Obvious: Let’s face it, here you have one of the great billboard executives in the country – an ardent USC supporter whose Regency billboards not only reside along choice SoCal freeway locations but also along the famous Sunset Strip. Who, other than Kennedy, would love nothing better than – in normal times and good relations – to have at it with other college bluebloods in the billboard wars? If you think that Notre Dame will be the only super college football program that will be looking to attack Southern California through eye-catching billboards, you’re having a pipedream.

The Obvious: In the not-so-distant future,you can probably also expect to see billboard advertisements coming into Southern California from the likes of the Alabama Crimson Tide, Ohio State Buckeyes, Clemson Tigers, and likely the Texas Longhorns with former Trojan and new UT head coach Steve Sarkisian, who must be salivating at the thought of promoting his product along the vast SoCal freeway system.

The Not So Obvious: It wouldn’t be a stretch to eventually see an Alabama billboard with a picture of starting quarterback Bryce Young saying, “I am Bryce Young from Pasadena, and I play for the Alabama Crimson Tide.” Or how about, “Hi, I am D.J. Uiagalelei, I am from the Inland Empire and I play quarterback for the Clemson Tigers.” And you don’t think that Oregon won’t soon be having billboards – they’ve done it before in L.A. – or have you forgotten the 2002 L.A. billboard featuring Duck receivers Keenan Howry, Jason Willis and Samie Parker on the north side of the 12-story Hotel Figueroa, a short distance from USC?

The Obvious: The Trojans, under athletic director Mike Bohn, have heavily invested in social media, which includes videos and other forms of visibility.

The Obvious: And finally, blueblood programs are going to need all hands on deck for the latest recruiting and promotional billboards, and that means ALL hands in order to compete with the elite powers of collegiate football.

The Not So Obvious: Now is the time to earnestly and honestly mend alumni and booster bridges/fences and come together. The last thing USC fans need to see on the freeway is a Notre Dame or Alabama sign fearing that the Trojans are asleep at the switch or are displaying apathy within their own cardinal and gold family.