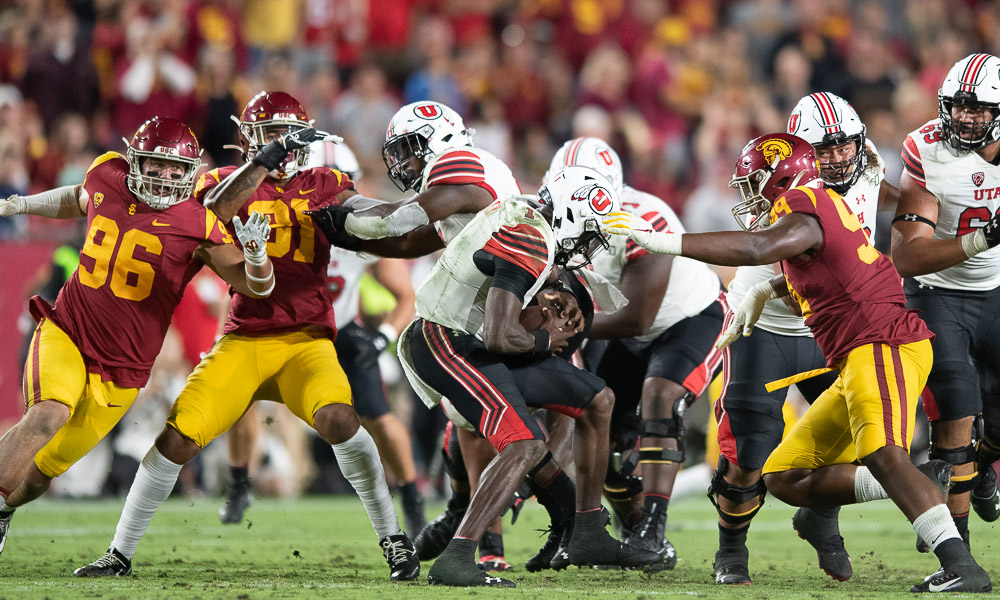 The Obvious: Arriving in Salt Lake City after making cardinal and gold history by winning their previous back-to-back games in the final two minutes, the No. 20 USC Trojans (2-0 overall, 2-0 Pac-12) are expected to play the Utah Utes (0-0 overall, 0-0 Pac-12 South) on Saturday night (8:30 p.m. MST/7:30 p.m. PST) in an empty and near freezing Rice-Eccles Stadium. “Expected” is the proper description because there’s no sure guarantee of competition since the Utes have already had their first couple of Pac-12 games cancelled due to COVID-19.

The Not So Obvious: Utah was picked third in the preseason Pac-12 South Division Media Poll behind the Trojans and ASU. Having already beaten ASU, if the Trojans defeat Utah or even if the game is cancelled, Clay Helton’s Trojans, who completed academic finals this week, will move one step closer to the Pac-12 South title and a date in the Pac-12 Championship Game on Friday night, Dec. 18.

Not to get ahead of ourselves, but since Saturday’s Colorado game against ASU already coronavirus-cancelled earlier in the week, the Buffaloes will come to the Coliseum next Saturday undefeated (2-0). The big question: Will the Trojans also arrive next weekend in The Grand Old Lady undefeated (3-0)? With the Cardinal and Gold having barely escaped ASU and Arizona by the width of Tommy Trojans’ bladed sword, the oddsmakers numerically still don’t trust Helton’s team against the hometown Utes, a team – as mentioned – that hasn’t even played a game yet in 2020.

The Obvious: The Trojans opened a 1 ½ -point favorite to defeat Utah.

The Not So Obvious: The Trojans have a historical overall 12-6 record against Utah, which includes a 2-4 losing record playing in Salt Lake City. FYI, the Men of Troy have lost their last three visits to Rice-Eccles Stadium. One big advantage for Gentleman Clay‘s club is that the notorious and rabid Utah fans and their famed MUSS student section won’t be in attendance, which is a big deal. However, did we mention that Utah head coach Kyle Whittingham is 11-0 in home openers?

The Not So Obvious: The ESPN broadcasters will be Dave Flemming (play-by-play), Rod Gilmore (analyst), and Stormy Buonantony (sidelines).

The Trojans’ overall KABC AM 790 broadcast will begin with a two-hour pregame show at 5:30 p.m. (PST). The pregame broadcast crew will also include Sam Farber and former Trojans’ quarterback Max Browne. Following the game, there will be a two-hour post-game show.

The Not So Obvious: The Utah broadcast (8:30 p.m. MST) can be heard on local Salt Lake City flagship station ESPN AM700 and with veteran Bill Riley calling the play-by-play and former Utes quarterback Scott Mitchell providing analysis.

The Not So Obvious: Below is this week’s Pac-12 schedule, cable channels, and kickoff times.

The Obvious: Saturday’s Salt Lake City weather forecast calls for sunny with a high of 47 degrees, a low of 28 degrees, 43% humidity, and 0% precipitation. Nighttime temperature for the 8:30 p.m. (MT) kickoff is forecast to be clear and 34 degrees.

The Not So Obvious: The real weather report is whether the 34 degrees – and getting colder as the game goes deeper into the night – becomes a major factor in execution and conditioning. FYI, the Trojans are 13-12-1 in “cold weather” games. The last time USC played a “cold weather” game was at Colorado in 2019 (a 35-31 win when the weather was in the mid-40s). We’ll see whether the Trojans will be able to take advantage of having two previous games under their belt while Utah will be playing its first game of the 2020 COVID season. We’ll also find out whether the Trojans can match the Utes physicality for four quarters and overcome a typically well-coached Kyle Whittingham team. Clay Helton said this past week that his 2020 team is a disciplined bunch, so we’ll find out whether they continue being penalized (110 yards last week on 11 flags), which would not be a sign of being disciplined.

Offensively, we’ll see whether USC’s offense continues to start slow and finish fast, sometimes in desperation mode (i.e. ASU and Arizona). It remains to be seen whether the Trojans offense can consistently convert short-yardage situations and continue not taking any snaps from under center. Clay Helton says that he is pleased with the Trojans running attack, which last week reached a team goal of at least 170 rushing per game. It remains to be seen whether a finesse running attack can take a toll on the opponent’s defense for four quarters.

All eyes will be on Trojans’ offensive coordinator Graham Harrell and his devotion to his pass-happy Air Raid offense, which does not exactly strike many respected observers as a balanced offense. There’s nothing to suggest that Harrell’s offense or the Air Raid in general has ever won a national championship. However, Harrell would like nothing better than prove his critics wrong. We’ll find out if the Trojans can attack a 3-3-5 defense better than they have from last season and so far this season. Teams are daring the Trojans to run the ball against a three-man defensive front, but it appears that Harrell is devoted to passing the ball into an 8-man secondary and limiting the run unless he absolutely must or just for a change of pace. One good thing from last week’s hair-raising win at Arizona, we saw the Trojans actually run a delayed draw, which went for big yardage on the ground. We’ll see whether the Trojans will include more draws and maybe even a screen or two against the physical Utes front.

USC’s offense, which ranks in the national Top 10 in total and passing offense, is guided by sophomore QB Kedon Slovis, who leads the country in completions and is in the Top 10 in passing yards, completion percentage and total offense. His top receiving targets are junior Amon-Ra St. Brown and senior Tyler Vaughns, who are both in USC’s Top 20 career receiving list (Vaughns is seventh and climbing) along with sophomore two-sport star Drake London. We’ll find out whether the Trojans’ talented receiving unit can take advantage of a whole new and inexperienced Utah secondary. Troy’s running game features 1,000-yard career runners Stephen Carr and Vavae Malepeai, both senior tough guys, and sophomore power back Markese Stepp.

Top Utah defenders on a unit that lost nine starters from 2019 include junior LBs Nephi Sewell and Devin Lloyd and junior DE Mike Tafua. We’ll see whether the experienced Trojans’ offense can take advantage of the Utes’ rebuilt defense.

Defensively, we’ll see whether the Trojans can control the new Utah backfield, and let’s not forget the Utes have an experienced O-line, returning four of the five O-liners, who have starting experience. The Trojans’ defense, which recorded four sacks at Arizona, is getting impressive play from sophomore OLB Drake Jackson (he made crucial end-of-game plays on both ASU and Arizona quarterbacks, respectively), DL junior Marlon Tuipulotu and his true freshman brother Tuli Tuipulotu, and junior safeties Talanoa Hufanga and Isaiah Pola-Mao. That being said, starting ILB Palaie Gaoteote will not play (concussion protocol) and will be replaced by experienced junior Kana’i Mauga, who will team with sophomore inside backer Ralen Goforth. Both will now be backed up by sophomore Raymond Scott and redshirt freshman Tuasivi Nomura, respectively. We’ll see whether the physical Utah running game takes advantage of the Trojans inside linebacker youth.

Leading the Utah offense, which will feature an entirely new backfield, will be quarterback sophomore Cam Rising, a transfer from Texas, or seniors Jake Bentley, a South Carolina transfer who started 33 times there, or Drew Lisk. Departed RB Zack Moss, the 2019 Pac-12 Offensive Player of the Year, will be replaced by either junior RB Devin Brumfield or sophomore Jordan Wilmore, who was once a USC recruiting verbal. Utah has a stable of receivers, including juniors Britain Covey, Bryan Thompson and Solomon Enis, and standout junior TEs Cole Fotheringham and Brant Kuithe.

In the battle of special teams, we’ll see whether Trojans true freshman placekicker Parker Lewis (2 of 3 FGs.) is able to adjust to the cold Utah weather, and the same can be said of sophomore punter Ben Griffiths (46.8 avg.). Utah will counter with either placekicking veteran sophomore Jadon Redding, who has 14 previous games under his belt, or inexperienced freshman Jordan Noyes. Sophomore punter Ben Lemmon (40.9) returns as the starter from last season.

The Obvious: In 2020, the Trojans offense is averaging 31.0 points per game, while Utah, which hasn’t played a game this season due to a COVID game, last season allowed 15.0 points per game.

The Not So Obvious: Regarding his USC offense not taking the ball from under center on short yardage situations, Helton said, “Right now, it’s just not us. It’s sad that the fourth-and-1 we had a missed assignment (against Arizona). I don’t think it was from a lack of scheme, but we did have a missed assignment.”

The Not So Obvious: Commenting on the state of his football team, Whittingham said, “We have some good things going for us on offense with very few new players and it being a veteran group. We expect to be productive on offense. The key is also how quickly this defense can come around. We are always looking to win the South and get to the championship game and win that. So, that is our objective, and we will see what happens. We have to start playing at some point and hopefully this is the week that we do that.”

The Obvious: The playing surface of Rice-Eccles Stadium is FieldTurf.

The Not So Obvious: The Trojans record is 44-30-1 in its last 75 games on artificial turf.

The Obvious: The Trojans will start sophomore quarterback Kedon Slovis (6-2, 200),

The Not So Obvious: Keep an eye on Slovis and his ability to spin the ball with strength. There are mixed feelings that there is something wrong with Kedon’s arm, although the kid says he’s fine and so do his coaches.

The Not So Obvious: This Saturday’s local 8:30 p.m. kickoff is the latest time for a USC game since the Trojans welcomed Wisconsin to the Coliseum at 8:30 p.m. in 1955 (Troy also hosted Oregon and Texas earlier that season at 8:30 p.m.).

The Obvious: Through the seasons, more and more USC football games – home and away – are being played at night.

The Obvious: The Trojans have one player on their roster from the state of Utah.

The Not So Obvious: That player is sophomore inside linebacker Tayler Katoa from Layton High.

The Obvious: Like many other West Region universities, Utah spends time recruiting the Southern California area.

The Not So Obvious: The Utes have 31 Californians on its 2020 roster.

The Obvious: And finally, after completing Game 3 of this abbreviated six-game Pac-12 regular season, the Trojans will have reached the halfway point in the regular campaign.

The Not So Obvious: Following Utah, the remaining three games are home games with Colorado and Washington State and a regular season-ending game at UCLA. The way things are shaping up, the Buffaloes, Cougars, and Bruins appear not to be easy pushovers. Of course, so far this USC season, nothing seems to come easy. Stay tuned!