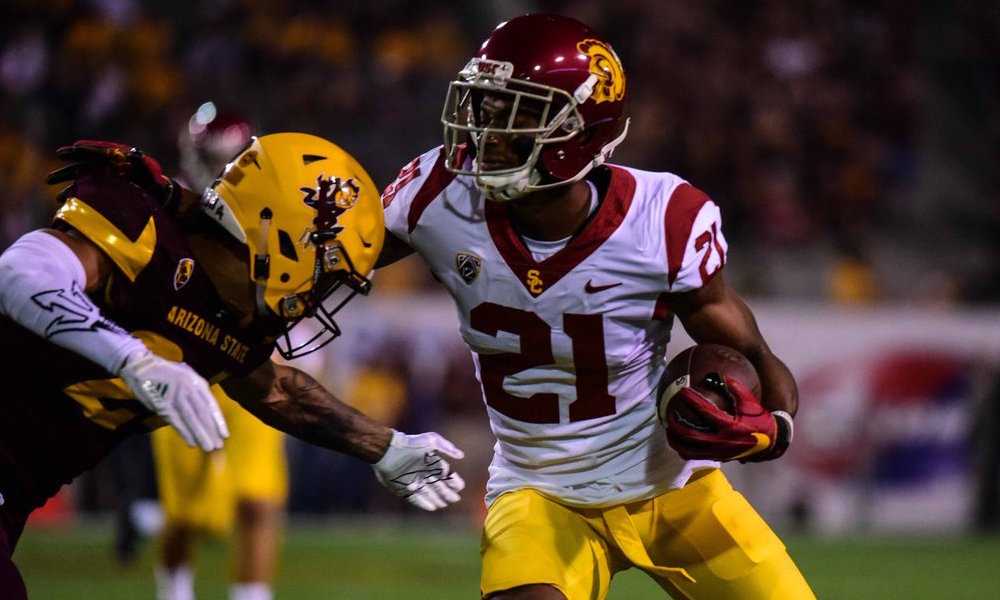 The Obvious from Los Angeles: A number of Sears locations may be going out of business, but USC Trojans’ inexperienced, third-string redshirt freshman quarterback Jack Sears may be going into the starting quarterback business due to injuries to starter JT Daniels (concussion) and backup Matt Fink (broken ribs). Unless there’s a sudden change in Daniels’ concussion protocol condition by Friday, Clay Helton will turn to Sears to lead the Trojans against Pac-12 South Division rival Arizona State on Saturday afternoon (12:30 p.m. PDT) at the Los Angeles Memorial Coliseum.

The Not So Obvious: The Trojans (4-3 overall, 3-2 Pac-12 South), hoping to rebound from last Saturday’s disastrous Utah weekend, will probably ask Sears, the former San Clemente (Calif.) High superstar quarterback, to engineer an already wobbly offense. The question now becomes: Can inexperienced, third-stringer Sears rise to the occasion and play well enough to bring home a critical conference victory over Arizona State (3-4 overall, 1-3 Pac-12 South)? Hoping to keep pace with Utah, which now holds the Pac-12 South Division tiebreaker over the Trojans, comes a secondary question: What happens if Jack Sears gets hurt? That answer is probably walk-on sophomore quarterback Holden Thomas (Brentwood High. Los Angeles) and if needed, junior transfer walk-on Brandon Perdue (New Mexico Military Institute/Oaks Christian HS, Westlake, Calif.). So, there’s a lot of potential game scenarios that could come into play against a very determined and improved ASU team whose record doesn’t reflect the fact that the Sun Devils’ three conference losses have been by a touchdown to Washington (27-20), Colorado (28-21), and Stanford (20-13). Even if JT Daniels plays, well, you get the picture? Tough gig.

The Obvious: The Trojans opened a 6 ½ -point favorite over ASU.

The Obvious: Saturday’s Trojans’ radio broadcast from the Coliseum will air live on ESPNLA 710 AM (12:30 p.m. PDT) with Pete Arbogast (play by play), John Jackson (analyst) and Jordan Moore (sideline).

The Not So Obvious: The ASU broadcast can be heard on Phoenix flagship station ESPN 620 AM with Tim Healey (play-by-play), Jeff Van Raaphorst (analysts) and Jordan Simone (sidelines).

The Obvious: Saturday’s Los Angeles weather forecast calls for partly cloudy with a high of 85 degrees, a low of 63 degrees, 41percent humidity, and 0 percent precipitation. Kickoff temp is expected to be sunny and 83 degrees.

The Not So Obvious: The real weather report is whether the Trojans can bounce back from their dominated loss to Utah, which was a real reality check for Clay Helton and his team. No doubt, the ASU game will confirm a lot about this team in regard to goals, motivation, and the ability to compete. We’ll see whether Helton’s team feels the sense of urgency that their coach most definitely must be feeling. A loss to the Sun Devils, and you can almost kiss the South Division title hopes goodbye. If that scenario comes true, Helton’s future as the Trojans coach will come under greater scrutiny if not intense pressure. We’ll see whether that type of unwanted pressure on Saturday affects the coach, his staff, and the players.

Offensively, the intriguing aspect of Jack Sears, a true dual-threat quarterback, starting is that many believe that Jack plays his best when the bright lights are on during an actual game. We’ll see whether this standout athlete can combine his legs and his arm to be effective. No doubt with a highly inexperienced redshirt freshman quarterback like Sears, the ASU defensive front will attack a Trojans’ offensive line that has been deservedly the subject of scrutiny and criticism. And if Sears is the starter, we’ll see whether the Trojans offensive coaching staff plays its playbook close to the vest.

At this point, we’ll find out whether the Trojans can amount even the semblance of a running attack. When it comes to passing the ball, we’ll see whether the Trojans’ coaches decide to pass the ball to the tight ends and do it down the middle. The one consistent offensive performer is junior wide receiver Michael Pittman, who is playing like he wants NFL scouts to remember his name. And don’t forget about sophomore receiver Tyler Vaughns (photo above) who is due for a big game. The Trojans’ offense, however, will have to be aware of Sun Devils defenders like senior safety Jalen Harvey (56 tac, 2.5 for loss, 1 d in 2018) and freshman linebacker Merlin Robertson (46 tac, 6 for loss, 4 sack, 2 d, 1 FR, 1 FF in 2018). It will not be easy to sustain long drives or big plays against the ASU defense.

Defensively, we’ll see whether the Trojans’ defense can defend the run, something that was lacking when it counted against Utah. Unfortunately, Trojans’ starting senior inside linebacker Cameron Smith is out (knee), which means that true freshman Palaie Gaoteote gets the starting nod. The biggest Trojans’ fear is that veteran ASU quarterback Manny Wilkins can do a lot of things that Utah’s Tyler Hundley can do, which is run and pass. We’ll find out whether the Trojans learned anything this practice week in defending a dual-threat quarterback like Wilkins. The Sun Devils also have a developing running back in sophomore star Eno Benjamin (137 tcb, 753 yds, 5.5 avg, 7 TD in 2018, plus 28 rec, 199 yds, 7.1 avg, 2 TD), who set a school game rushing record this year with 312 yards versus Oregon State and is 13th nationally in rushing (107.6, second in Pac-12) and 17th in all-purpose running (136.0, fourth in Pac- 12).

On Trojans’ special teams, we’ll see whether Trojans’ placekicker Michael Brown rebound himself after missing a critical first half field last week at Utah. On the other hand, ASU has a real weapon in sophomore PK Brandon Ruiz (24-of-24 PAT, 8-of-9 FG in 2018) who is 12th nationally in field goal percentage (.889, second in Pac-12).

The Obvious: Herm Edwards is in his first season as the ASU head coach.

The Not So Obvious: Those who laughed and shook their heads over the selection of Edwards aren’t doing much laughing right now. Edwards has schtick, but he also connects with his young players who buy into his enthusiasm and NFL approach to games. The Trojans can expect to see a highly focused Sun Devils team on Saturday.

The Obvious: ASU has a new defensive coordinator, Danny Gonzalez, who spent the last several seasons at San Diego State as the Aztecs DC under head coach Rocky Long.

The Not So Obvious: Asked about the 2018 ASU defense and how different it is from last season, Trojans’ offensive coordinator Tee Martin said, “They’re a good defense that likes to bring multiple looks and pressures to get to the quarterback. They disrupt run blocking schemes, and they have different line games that they run. It’s going to be up to our offensive line to find them and get hats on hats to create some movement and create some running lanes. Secondary wise, both corners we played against them last year and they are guys that understand their scheme very well and do a good job of keeping things in front of them. This season is a different scheme. Last year they were more four downs and bust up field, and they had a really good pass rush with Whicker and those guys. The new guy is from San Diego State and runs Rocky Long’s pressure schemes, which means moving and slanting up front. It’s very similar to what we’ve seen from Texas and Washington State.”

The Not So Obvious: ASU has 32 players from California.

The Obvious: Clay Helton says the team needs to get through October to get to November, the month he says will showcase a good Trojans football team.

The Not So Obvious: This will be the 18th time that the Trojans have played a game on Oct. 27, tying Sept. 29, Oct. 24 and Nov. 7 as the most popular days in Trojan regular season history. January 1 is the all-time leader, with 33 USC games on that day.

The Not So Obvious: ASU has an enrollment listed at 51,164 students.

The Obvious: And finally, there will be the usual USC recognitions during the game and at halftime.

The Not So Obvious: Recognitions include a “Sneakers Drive” to combat the effects of homelessness; a “Pink Game” in conjunction with Breast Cancer Month; USC Athletics’ Community Outreach Program for winning the 2018 NACOA/Fiesta Bowl Community Service Award; and a pregame flyover featuring six vintage military aircraft.