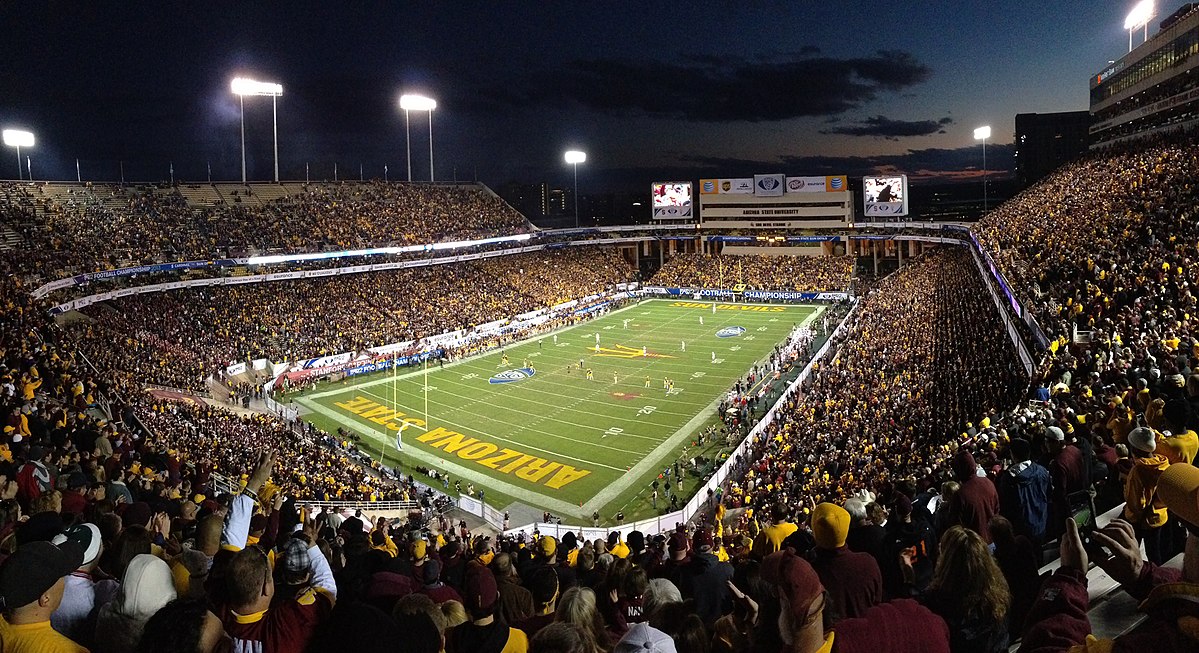 The Obvious from Tempe: With all the talk that Trojans’ fourth-year head coach Clay Helton’s days are numbered, the other number that’s still in play is Utah’s one-game lead ahead of the Men of Troy (5-4, 3-2 Pac-12 South) with three games to go in the regular season. The Trojans will try and remain in striking distance of the South Division leading Utes (8-1, 5-1, Pac-12 South) – who have a bye this week – by defeating the Arizona State Sun Devils (5-3, 2-3 Pac-12 South) on Saturday afternoon (1:30 p.m. MT/12:30 p.m. PT) in an anticipated warm Sun Devil Stadium (cover photo above).

The Not So Obvious: Here’s something to consider: It’s possible if the Trojans sweep their remaining three games – two of which are against South Division opponents, ASU and UCLA, they will finish the Pac-12 season by defeating every team in the South Division yet not advancing to the Pac-12 Championship Game if Utah wins their remaining three games! How’s that for something to chew on? Beating every Pac-12 South opponent and not advancing to the conference title game against probable Oregon. What a world, what a world.

The Obvious: Arizona State is a 1.5-point favorite to defeat the Trojans.

The Not So Obvious: The ABC broadcasters will be Jason Benetti (play-by-play), Rod Gilmore (analyst) and Quint Kessenich (sidelines).

The Trojans’ overall KABC AM 790 broadcast from Tempe will begin with a two-hour pregame show at 10:30 p.m. (PT). The pregame broadcast crew will consist of Sam Farber, former Trojans’ quarterback Max Browne, and Julia Adams. Following the game, there’ll be a two-hour post-game show.

The Not So Obvious: The Arizona State broadcast (1:30 p.m. MT) can be heard on Arizona Sports KMVP 98.7 FM with Jordan Simone (play-by-play), Tim Healey (analyst), and Jeff Van Raaphorst (sideline).

Saturday’s game will also air on Sirius XM satellite radio (channel 388) or online channel (977) and on the Tunein Radio app.

The Obvious: Saturday’s Tempe weather forecast calls for partly cloudy with a high of 86 and a low of 60 degrees, 23 percent humidity, and 0 percent precipitation. Temperature for kickoff is expected to be partly cloudy and 85 degrees.

The Not So Obvious: The real weather report is whether the Trojans are so demoralized by last weekend’s 55-24 loss to No. 7 Oregon that they can’t refocus or rebound against an ASU club that’s coming off a bye week after dropping their last two games on the road. Perhaps the Trojans will be inspired knowing that they can still win the Pac-12 South with some help against Utah and gain some revenge from last season’s 38-35 loss to the Sun Devils at the Coliseum. We’ll find out whether the Trojans can overcome their lethal turnover issues. Last week against Oregon, the Men of Troy had four turnovers, which led to 28 Oregon points. For the season,79 of the 255 points the Trojans have allowed have come following turnovers.

Offensively, we’ll see whether Trojans’ freshman quarterback Kedon Slovis not only recovers from last game’s three interception performance but is inspired to perform at his best near his hometown area of Scottsdale (Desert Mountain High). You can bet his quarterback mentor, NFL Hall of Famer Kurt Warner, will be in attendance to add support along with some of his former prep teammates. For good or bad, we’ll see whether Slovis breaks last week’s record of 57 pass attempts, breaking Todd Marinovich’s school record (55). We’ll also find out whether the Trojans elect to give more carries to true freshman running back Kenon Christon, and whether the Trojans’ offensive line can make enough dents in the ASU defensive front to allow the super speedy Christon to get into the Sun Devils’ secondary.

We’ll also see whether the Trojans’ offense can deal with an ASU defense that is 10th nationally in turnover margin and 22nd in rushing defense. It will be a challenge to see whether the Trojans’ offensive line can deal with top Sun Devils tacklers like sophomore LBs Darien Butler and Merlin Robertson. The Trojans’ heralded receiver corps is led by senior Michael Pittman Sr., who has caught four or more passes in each of the last 14 games. During that stretch of games, he has a total of 80 receptions for 1,341 yards and 13 TDs.). Joining Pittman will be receivers like sophomore Amon-Ra St. Brown, junior Tyler Vaughns, and impressive true freshman Drake London. They will be challenged an ASU secondary led by junior DB Evan Fields while pressure will be applied by sophomore DL Jermayne Lole.

Defensively, the Trojans must regroup from last week’s Oregon scoring onslaught. We’ll see whether the Trojans defense can contain ASU true freshman and dual threat QB Jayden Daniels. A key for the Trojans’ prospects will be whether they can contain standout junior RB Eno Benjamin, a 2018 All-Pac-12 first teamer, who has nearly 2,500 career yards and more than a dozen 100-yard outings. Troy’s secondary will also be tested by leading pass catchers Brandon Aiyuk, a senior who is in the national Top 20 in all-purpose running and receiving yards, senior Kyle Williams, who has a reception in 36 straight games, and redshirt junior Frank Darby. The good news is that Trojans DE Drake Jackson and SS Talanoa Hufanga are expected to play after being held due to injury, and we’ll see whether they can make an impact on the game.

On Trojans’ special teams, we’ll find out whether ASU punter Michael Turk, who set an NCAA record with a 63.0 average in the Kent State opener and is currently seventh in the nation in punting (46.8), is a major factor. The big concern for the Trojans’ special teams will not be placekicker Chase McGrath or punter Ben Griffiths but special teams coach John Baxter’s attention to kickoff return coverage, which gave up a killer 100-yard kickoff return last week against Oregon at the very end of the first half. It was a game changer. FYI, ASU placekicker Cristian Zendejas, whose father and uncle kicked at ASU, is 18th nationally in field goals.

The Obvious: The Trojans offense averages 30.44 points while the ASU defense allows 21.13 points per game.

The Not So Obvious: ASU’s offense averages 23.38 points per game while the Trojans’ defense allows 24.88 points per outing.

The Obvious: Clay Helton is the Trojans’ fourth-year head coach, and his current record at USC is 40-24.

The Not So Obvious: Regarding ASU, Helton says, “They’ve got a pretty young quarterback that has a bright future in Jayden (Daniels), who is doing some nice things. He is extremely elusive who will keep me up at night every night this week. I think it’s going to be critical when you watch him, his escapeability, and to move the chains is something he does as a young quarterback. He’ reading one-half of the field, and if it’s not there, he’s taking off. We’re going to have to keep him in the pocket. And then you look at (Eno) Benjamin, he’s a dynamic runner. To have that one-two punch, that’s scary.

“Defensively, it’ been interesting to watch (ASU), and it’s still early in the week, but they come with a different flair each and every week. They’re going to have a new wrinkle, and you’re going to have to diagnose it early. We’re used to that offensively like we get the flavor of the week each and every week. It’s going to be critical. They move around and give you different looks. Herm (Edwards) was a defensive coach by trade and has done a tremendous job with it and brings some old-school coverages like the Tampa 2, and they coach it up really well.”

The Obvious: Herm Edwards is the second-year head coach of the ASU Sun Devils.

The Not So Obvious: Commenting on the Trojans, Edwards said, “Obviously, coming off a bye, a lot of work needs to be done, USC week. Very talented football team on both sides of the football. You watch the tape, it stands out, they had a tough game against Oregon, very competitive game, then Oregon kind of pulled away at the end. But a lot of talent, probably the most talented receivers that we’ve faced as a corps thus far this season. They’re big, physical, they run, catch a lot of the 50-50 balls. They throw the ball up in the air, didn’t run it as much against Oregon as they probably would’ve liked, I want to say they had 57 passes, only 25 runs. But that being said, they’re a very, very potent offense.

“The Young quarterback (freshman Kedon Slovis) is doing a nice job for them, they got a really talented offensive line. Defense is fast, big and physical, so we’ll have our hands full, that’s for sure. We got to prepare to understand that they’re coming in here off a tough loss. We had a pretty bad one too (loss), so this will be a game that we mentally and emotionally have to be ready to play.”

The Obvious: The starting quarterback for the USC Trojans is true freshman Kedon Slovis (6-2, 200).

The Not So Obvious: It’s a Arizona homecoming of sorts for Slovis, who played his ball at Scottsdale Desert Mountain High. At Desert Mountain, Kedon made 2018 PrepStar All-Western Region, USA Today All-Arizona honorable mention and Sports360AZ All-Academic honorable mention as a senior. He completed 183-of-294 passes (62.2%) for 2,542 yards with 18 TDs and 6 interceptions in 2018. Slovis is majoring in business administration at USC with a 3.42 GPA.

The Obvious: The starting quarterback for ASU is true freshman Jayden Daniels (6-3, 175).

The Not So Obvious: Daniels, who hails from San Bernardo (Calif.) and attended Cajon High, was a four-year varsity starter at Cajon, compiled a 44-10 record including back-to-back seasons with at least 12 win, and threw for a CIF-Southern Section record 14,007 yards and 170 touchdowns during a four-year career at Cajon High School. A consensus four-star prospect amongst the major recruiting services. Jayden was ranked as the No. 83 overall prospect and the No. 2 dual-threat quarterback prospect in the country in 24/7 Sports’ Composite Rankings while 24/7 Sports listed him as the No. 1 dual-threat quarterback prospect nationally in their own rankings.

The Obvious: It’s very rare for a Saturday afternoon kickoff at ASU.

The Obvious: Jack Jones is an ASU redshirt junior corner.

The Not So Obvious: Yep, it’s the same Jack Jones, alum of Long Beach Poly and former Trojans corner, who is now a Sun Devil.

The Obvious: The Trojans have six players from the state of Arizona.

The Obvious: One of ASU’s recruiting lifelines is the prep and JC talent in California.

The Not So Obvious: ASU has 35 Californians on its roster.

The Not So Obvious: If this is a different team in 2019 as Clay Helton suggests, you’ll see a reversal in fortunes in upcoming games at ASU, at Cal, and UCLA. Drop these final three games and the final record will be again 5-7 with no bowl game for the second consecutive season. Win one of the three and the Trojans finish 6-6 and go to a bowl game. Win all three games and the Trojans are 8-4 and go to an even better bowl game.