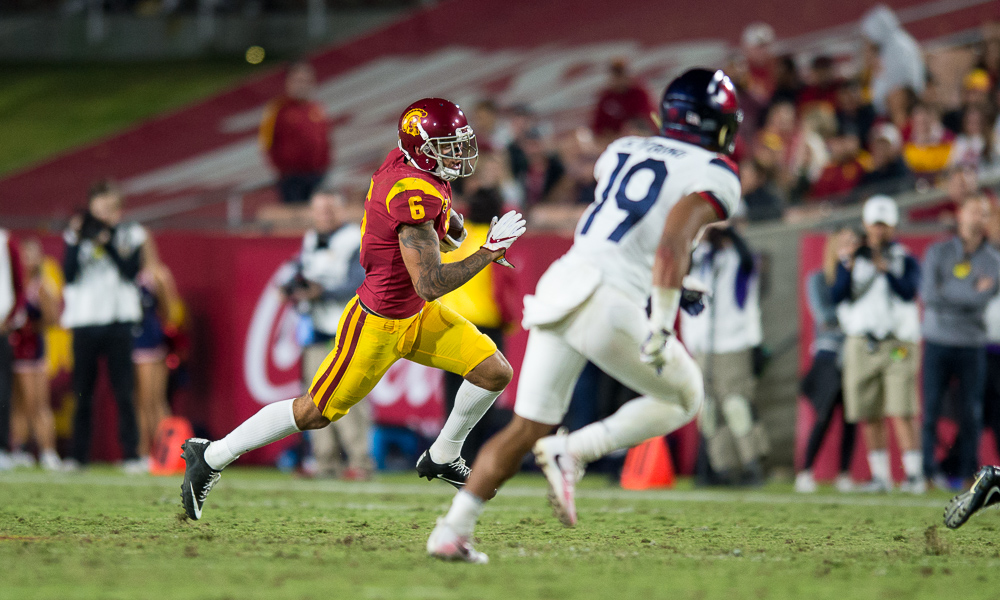 The Obvious from Tucson: Two unranked Pac-12 South Division teams, the USC Trojans (2-2 overall, 1-1 Pac-12-South) and the Arizona Wildcats (2-2 overall, 1-0 Pac-12 South), put the brakes to seasons slowly slipping away by gaining critical Pac-12 victories last weekend against Washington State and at Oregon State, respectively. However, for the Trojans and Wildcats, one of these team’s modest momentum will be short-lived, as the Men of Troy and the Arizona collide Saturday night (7:30 p.m. PDT/MDT) in a critical Pac-12 South Division matchup in Tucson’s Arizona Stadium.

The Not So Obvious: Perhaps the first thing you notice is that Arizona is unblemished in conference play at 1-0, having beaten the second worst team in the Pac-12, the Oregon State Beavers (1-3, 0-1 Pac-12). The worst team? Your friends in Westwood whose record (0-3 overall, 0-0 Pac-12) is still searching for victory. As for the Trojans, many thought that the game Saturday night at Arizona would be the “trap game” of the season. However, much like the Trojans, Arizona can be inconsistent and at times unpredictable. Since both teams are coming off wins and this being a Pac-12 South Game, this collision in the desert and dry heat could send either team into accelerated momentum or an accelerated freefall.

The Obvious: The Trojans opened a 3 ½ favorite to defeat undefeated Arizona.

The Not So Obvious: The Men of Troy hold a 32-8 lead in its series with Arizona (not including SC’s 2005 home victory that was later vacated due to NCAA penalty; original record 33-8). The Trojans have won the past five matchups, 7 of 8 and 14 of 16. The Trojans have won 80% of its games against the Wildcats (including the past five meetings), with just two losses since 2001, and the Wildcats have only beaten the Cardinal and Gold four times in Tucson. However, nearly half of the games in this series have been decided by eight points or less. This is also the Trojans’ fourth night game in 2018, so playing at night shouldn’t be a problem and probably helps in the desert heat.

The Not So Obvious: The Arizona broadcast can be heard on flagship station 1290 AM/107.5 FM with Brian Jeffries (play-by-play), Lamont Lovett (analysts) and Dana Cooper (sidelines).

The Obvious: Saturday’s Tucson weather forecast calls for sunny with a high of 99 degrees, 88 degrees at kickoff and a low of 72 degrees, 25 percent humidity, and 0 percent precipitation.

The Not So Obvious: The real weather report is whether last week’s Pac-12 victory was a case of the Trojans showing guts, determination and improvement on offense or Washington State blowing an opportunity via a blocked field goal and becoming too conservative in its play calling near the end. One could also argue that the Men of Troy were fortunate to come out with a conference victory and the focal point of scrutiny for the Trojans team is the defense especially the secondary and pass rush.

Offensively, we’ll see whether the Trojans can continue to improve against an Arizona defense that statistically is ranked 11th in the conference in total defense (411.0 yds per game) with only Oregon State (540.0 YPG) being worse. The Wildcats’ defense is vulnerable both against the rush (192.5 YPG) and the pass (218.5 YPG). It will be intriguing whether Trojans’ true freshman QB JT Daniels can continue to grow in another hostile environment, and there are continuing signs the kid is growing. It will certainly help JT if the Trojans can establish a running game on Saturday and whether OC Tee Martin will continue to use a fullback in the pure I-formation since there was much success against Washington State near the goal line and when running out the clock. In terms of receivers, we’ll see whether the trio of Michael Pittman (photo above), Tyler Vaughns, and Amon-Ra St. Brown can do damage to a questionable Wildcats secondary. Then there is still the looming question whether the offensive line will be physical and knock the Wildcats front backwards. You can bet that Trojans fans will be examining the O-line quarter-by-quarter. The Wildcats do have two standout linebackers in sophomores Tony Field ll (6-1, 230) and local Mission Viejo (Calif.) High product Colin Schooler.

Defensively, we’ll see whether the Trojans’ defense can slow down an Arizona offense that leads the Pac-12 in total offense with 519.3 YPG. The Trojans got some good work last week against Washington State from inside linebackers Cameron Smith and John Houston but will be really challenged this week by Wildcats junior dual-threat QB Khalil Tate (6-2, 218), who has been slowed by an ankle injury but remains a serious threat running and passing. Tate’s backfield mate, sophomore running back JJ Taylor, 2017 Pac-12 co-Offensive Freshman of the Year, presents a serious one-two punch in Arizona’s run-pass option package. Arizona leads the conference in rushing (247.3 yds.) and we’ll find out whether the Trojans’ front can limit the damage. The Trojans secondary, namely the corner spot opposite Iman Marshall and the safety spot opposite Marvell Tell, has been a challenge. We’ll also find out in Game 5 whether the secondary can finally get its first interception of the season. How Arizona attacks these questionable areas will determine whether the defense will be successful. One area also of concern is whether the Trojans’ defensive front can stay disciplined, maintain gap integrity, mount a pass rush, and contain Tate who could be deadly if allowed to scramble around.

The Obvious: The Trojans’ offense is averaging 24.8 points per game while the Arizona defense is allowing 29.5 points per outing.

The Obvious: Tee Martin is the Trojans offensive coordinator.

The Not So Obvious: Asked to comment on the Arizona defense, Martin said, “Each week they have a package or two for their opponent. If you watched them earlier in the year, they did a certain thing against Houston and then kind of changed as the season went (on). So, we’re going in expecting a little bit of everything for the most part, which has been the season for us – man, zone, pressure, no pressure, and all that good stuff. They have experience in the secondary playing some different guys, their linebackers are active and play downhill making a lot of tackles. So, we’re going to have maintain their front 7 and all their movements. We look to have balance in our run and pass game.”

The Obvious: The Trojans got a good performance from running back Vavae Malepeai last Friday night against Washington State.

The Not So Obvious: On the other hand, the Wildcats have an outstanding runner in sophomore J.J. Taylor, who is just 5-foot-6 but is averaging 6.7 yards per rush to go along with a long TD run of 62 yards. Having scored three touchdowns this season, it should be noted that J.J. is from powerhouse Corona (Calif.) Centennial. Coming out of high school, JJ was named Mr. Football as California’s top offensive player by CalHiSports.com.

The Obvious: Kevin Sumlin is in his first season as the Arizona head coach.

The Not So Obvious: As most know, Sumlin was fired from Texas A&M and is the former coach and mentor to former controversial Aggies quarterback Johnny Manziel, who is now in the Canadian League. Sumlin’s name was once in consideration for the Trojans’ head football coaching position.

The Obvious: One of the premier freshmen in the country this season is Trojans’ wide receiver Amon-Ra St. Brown.

The Not So Obvious: Did you know that Amon-Ra is fluent in German (his mother, Miriam, is from Germany) and French (he lived in Paris as a fourth grader)?

The Obvious: Arizona quarterback Khalil Tate opened the season as a frontrunner for the Heisman Trophy before an ankle injury reduced his mobility.

The Not So Obvious: Some have questioned earlier whether Tate was assimilating to Kevin Sumlin’s offense or was even happy in it. Tate (63 of 116, 54.3%, 1,039 yds, 8TD, 2 int. in 2018, plus 23 tcb, 31 yds, 1.3 avg, 2 TD), who played quarterback at Gardena (Calif.) Sierra, got off to the aforementioned slow with the aforementioned ankle issue. Tate’s ankle still allows him to play, but he is unable to make lateral cuts that are a big part of his game. Ironically, his reduced mobility has increased his passing proficiency and his deep ball completion has been impressive.

The Not So Obvious: Asked about Tate and the Wildcats’ offense, Pendergast says, “He’s a very dynamic athlete, and he can make a lot of plays in a lot of different ways. He’s clearly their bell cow in their offense and can hurt you running and throwing the ball with a lot more attempts this year. When you look at his overall numbers, he’s a true dual-threat quarterback now.

“Their offense has different wrinkles (with a new offensive coordinator) and their personnel is a little different from where Coach (Noel) Mazzone has been. They’re using their people a little bit differently. I think their biggest strength is their running game. They do a nice job blocking up front and had a lot of yards last week (against Oregon State). They have a really good crew of running backs, and Khalil’s ability to push the ball down field in the passing game gives them explosive plays.”

The Not So Obvious: Arizona has 44 players from California.

The Obvious: The Trojans play nearly half of their schedule in the month of September.

The Not So Obvious: This will be the 18th time that USC has played a game on Sept. 29, tying Oct. 24 and Nov. 7 as the most popular days in Trojan regular season history. Jan. 1 is the all-time leader, with 33 USC games on New Year’s Day

The Obvious: The Trojans have a history of doing well against teams whose first letter begins with “A”.

The Not So Obvious: Arizona has an enrollment listed at 44,831 students.

The Obvious: And finally, last season the Trojans did not have a bye week, which was highly unusual.

The Not So Obvious: The Trojans will have a bye week following Saturday’s Arizona game and will next play in the Coliseum against currently undefeated Colorado (3-0, 0-0 Pac-12) on Saturday, Oct. 13. The Buffaloes play UCLA tonight (Friday) in Boulder.