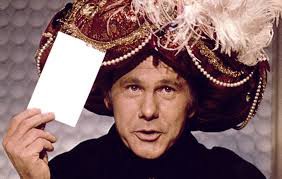 The Obvious question: Does legendary television soothsayer Carnac the Magnificent (AKA Johnny Carson/photo above) agree with USC athletic director Mike Bohn’s final assessment of the 2020 USC football season when the Trojans AD told the Los Angeles Times this week, “If you look at the progress we made and the adjustments we collectively worked on, I can’t think of one area where we didn’t improve”?

The Not So Obvious answer: Carnac might have responded to Bohn’s “I can’t think of one area where we didn’t improve” with “Uh, Mike, how about not winning a Pac-12 championship and may the ghost of John McKay visit you nightly.” Aside from Carnac’s snarky comment, if winning championships is thee agreed upon main improvement by Mike Bohn and head coach Clay Helton, the stark reality is that the Trojans haven’t won a conference football title since 2017, and doesn’t that make it three seasons in a row without hoisting the hardware?

The Obvious question: Do you foresee Clay Helton still being the USC coach after the 2021 season?

The Not So Obvious answer: Look, if Gentleman Clay wins the Pac-12 next season, he’ll remain and should be the coach – period. However, if he doesn’t win the Pac-12 South Division or losses in the Pac-12 title game, he won’t be or shouldn’t be. If Helton’s 2021 team doesn’t win the conference title, that will make it four consecutive seasons without a championship. I don’t think a USC coach, even with the amazingly good fortune of a Clay Helton, can survive four consecutive seasons without a conference title at USC unless there is a deemphasis in the goals and objectives of the Trojans football program.

The Obvious question: Has USC athletic director Mike Bohn made Clay Helton aware of the expectations, and can Bohn reassure Trojans fans that he, too, understands those high expectations?

The Not So Obvious answer: The initial answer would be yes, according to an earlier Times interview with Bohn, who said, “From Day One, I have had candid and honest and progressive conversations with Clay about the program, and we’ll continue to do that together and continue to make progress. My expectations continue to be high, driven by our incredible history and tradition and high intensity of interest in our program from our donors and fans.”

The Obvious question: What effect will the hiring of new USC’s Director of Football Sport Performance Robert Stiner have on the football program?

The Not So Obvious answer: Given the fact that Stiner will be the third strength coach in four years, I think enthusiasm should be somewhat tempered. That being said, Stiner will be in charge of football strength and conditioning and coming from a highly success Notre Dame football program, he should know what it takes to make and develop physical football players on both sides of the line of scrimmage.

The Not So Obvious answer: The Notre Dame offense is based on balance and physical play while the Trojans offense currently relies on the finesse of the Air Raid. Keep in mind, Stiner won’t be training Notre Dame level 5-star and 4-star offensive linemen since the Trojans are currently mostly a collection of 3-star recruits. It still gets down to core talent, and the Trojans need to recruit Notre Dame level linemen, as well. Defensively, I think Stiner will be able to work within a defense that is based on physical, aggressive play. And there is no denying that there is very good defensive talent coming to Troy.

The Obvious question: When will we find out the physical status of Trojans quarterback Kedon Slovis?

The Not So Obvious answer: Ha, that’s a good one! If the O/NSO was a betting man – and I am not – I can foresee Clay Helton making a Slovis announcement a few days before the start of spring ball, which is scheduled to begin in early April. It won’t shock the O/NSO if Slovis doesn’t participate in spring ball and the focus turns to true freshmen quarterbacks Miller Moss and Jaxson Dart and perhaps the return of Matt Fink.

The Obvious question: Who will be the big name come the early February recruiting signing period?

The Not So Obvious answer: No question about it, the big fish is Santa Ana (Calif.) Mater Dei linebacker Raesjon Davis, and unless there is a mass defensive coaching exodus – which there won’t be – the O/NSO will be shocked if Raesjon isn’t a Trojan. However, Raesjon recently listed his final five schools, which besides USC also includes Ohio State, LSU, Oregon and Vanderbilt. I’d keep an eye on the Buckeyes and the Ducks, although the Trojans do have need for a second freshman linebacker besides Julien Simon. There’s opportunity there for Raesjon and don’t forget that Korey Foreman is recruiting Raesjon intensely.

The Obvious question: Do you agree with USC running backs coach Mike Jinks, who recently said in the Los Angeles Times that last season’s running attack was a disappointment?

The Not So Obvious answer: The O/NSO could not agree more with Jinks. So, whom do you lay that responsibility upon? The easy answer is OC Graham Harrell, who has given every indication and evidence to suggest that after two seasons he can coach the passing game (first in the Pac-12 in 2020) but is woefully neglectful with the running game (last in the Pac-12 in 2020).

Coach Jinks wants to return to the traditional way of a No. 1 running back with a backup, which means no more by committee. Jinks wants one back to step up and then feed him the ball to get into a rhythm. Even if Jinks finds his back, will Graham run the ball with any conviction or is that simply another rhetorical question?

The Obvious question: Do you think that the new media video blitz by the Trojans social media team will make a difference in the football program?

The Not So Obvious answer: Much of those hype videos are for recruits, and when you’re young, it can fire you up and be influential. That said, the O/NSO doesn’t care how many slick videos are released to the public, it won’t matter if these slick videos are not backed up with victories on the field.

The Obvious question: What is the level of concern that former Trojans All-America linebacker, Butkus Award winner, and current USC offensive quality control assistant Chris Claiborne is rumored to being pursued by ASU for an assistant coaching position?

The Not So Obvious answer: Honestly, this rumor is really unfortunate if true. There is no way that Chris Claiborne should be coaching anywhere but USC. To lose him would be tragic, especially if there is a USC coaching change after next season. Claiborne should be coaching either inside or outside linebackers. The O/NSO understands that DC Todd Orlando also coaches the linebackers, but it would be disappointing if Claiborne did become a Sun Devil.

The Obvious question: Will Reggie Bush get his Heisman Trophy back and will we see his jersey No. 5 resting alongside the other Heisman Trophy jerseys during homes games at the peristyle end of the Coliseum?

The Not So Obvious answer: The O/NSO believes that USC was right in allowing Bush to return to campus after his NCAA exile. As for the Heisman, it’s still our opinion that he violated the rules and was technically ineligible the season he won the Heisman Trophy. Sure, he was the best player in college football his Heisman season, no doubt, but he was playing while receiving improper benefits. Was it fair for a gallant Fresno State team to be literally defeated by Bush while he was taking improper benefits? However, if the Heisman folks decide to return Bush’s trophy to him, so be it.

The Obvious question: As of today, where would you pick the Trojans in the 2021 Pac-12 South Division?

The Not So Obvious answer: The O/NSO thinks the Trojans have a lot of work to do to be the favorites in the 2021 Pac-12 South Division. I would pick ASU on paper to win the division (the Trojans play at ASU) since the Sun Devils have a lot of talent returning. And remember, the Trojans have been really fortunate to win their last two victories against the Sun Devils. Last season, ASU was really hurting at wide receiver, and it took a USC series of miracles late in the game to achieve victory. Two seasons ago, the Trojans barely escaped Tempe with a victory.

The Obvious questions: Okay, you see ASU as your pick for the Pac-12 South Division, so who follows the Sun Devils?

The Not So Obvious answer: Utah is our pick behind ASU because the Utes bring almost everybody back, but they will come to Los Angeles in 2021 having never won in L.A., but Utah got Oklahoma running back transfer T.J. Pledger, who should soften the tragic passing of Pac-12 Freshman of the Year Ty Jordan. At this point I see the Trojans as No. 3 in the division, and they will get a fight from Colorado and UCLA. Winning the Pac-12 South won’t be easy even with the return of Kedon Slovis.

The Obvious question: Do you see the CFP expanding to eight teams sooner rather than later and how would that affect the Trojans?

The Not So Obvious answer: Yes, it’s not if but when the CFP expands to eight teams. How do you have a national championship when the entire nation isn’t involved from the get-go? Right now, the West Coast doesn’t even exist in the CFP. As for the Trojans, if the Pac-12 Conference winner gets an automatic bid into the CFP, it will cause a major reassessment of the USC football program and the expectations of the head football coach. The O/NSO thinks that would be a good thing.

The Obvious question: How will the loss of offensive tackle Alijah Vera-Tucker affect next season’s offensive line?

The Obvious question: What kind of an effect will the departure of Pac-12 Commissioner Larry Scott have on both the conference and the Trojans?

The Not So Obvious answer: Well, quite frankly, it’s about time. The Pac-12 and Larry Scott, who will mutually part ways in June, had become a national joke under Scott’s leadership. He was no longer a man for the current conference times and badly needed to go. As for the Trojans, maybe Pac-12 9 a.m. kickoffs will also go away along with Scott.

The Obvious question: And finally, do you see fans attending home games next season?

The Not So Obvious answer: The O/NSO isn’t overly optimistic as of today regarding fans in the Coliseum early next season. I guess it depends on how many fans get the vaccine, and the state of play regarding the virus in Southern California. Right now, maybe fans in limited numbers in late October or November.