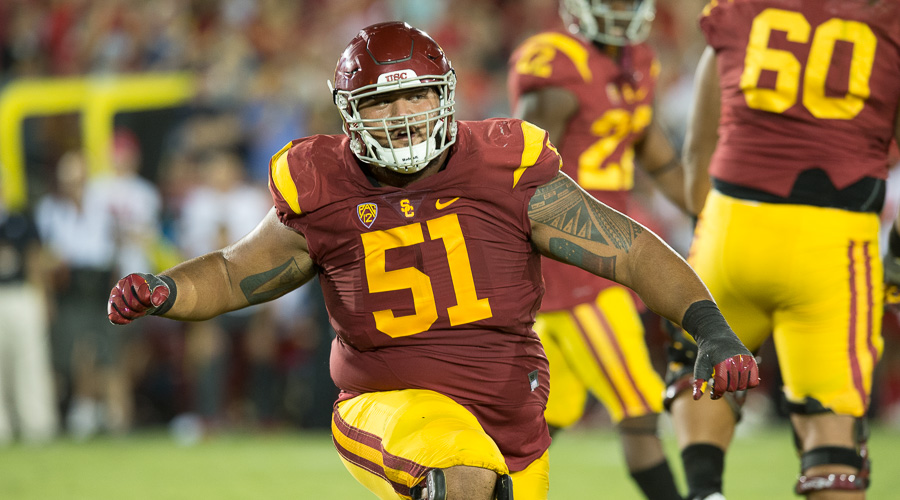 LOS ANGELES – When 2016 USC football spring practice commences in a little more than two weeks, the returning Trojans offensive linemen will get their first on-field taste of new offensive line coach Neil Callaway, and it figures to be a major jolt of attitude adjustment as much as the basic fundamentals of offensive line play.

The Trojans offensive linemen have been more than forewarned about their former veteran SEC offensive line coach. In fact, first-year USC quarterback coach, Tyson Helton, and his head coach brother, Clay Helton, have made it quite clear publicly that the returning offensive linemen better huddle up and buckle up for Camp Callaway.

“I think Neil Callaway is the best offensive line coach in the business,” said Tyson Helton, who coached with Callaway at Western Kentucky last season before both were hired away this winter by Clay Helton to be part of his new cardinal and gold staff.

If Trojans fans are now panting at the thought of a vicious and violent offensive line, they had to love Tyson Helton’s additional comments regarding his offensive coaching mate.

“When those five OL show up at the park, they are going to be mad at the world and ready to hurt the men in front of them,” Helton informed recently at a meeting of the San Gabriel Valley Trojan Club.

Clay Helton is also on record as saying his offensive linemen better be ready for Callaway and commented earlier that in the first month with their demanding line coach, they will hate the guy, but after that they will love him for life.

Well, if the comments by the Helton brothers are accurate, it certainly sounds like a major attitude adjustment is forthcoming – especially when it pertains to nastiness and aggression.

Unfortunately, Trojans fans have heard it too many times before in recent seasons heading into spring practice. There is the annual March/April talk of being a powerful, physical offensive line that can ram the ball down a defense’s throat, but there has been no consistent evidence in the fall to support the party line.

The truth is that in recent times and probably reflecting the true offensive philosophy of the previous two fulltime Trojans head football coaches (Lane Kiffin and Steve Sarkisian), nobody would confuse contemporary USC O-lines with any of those exhibited during the vaunted heydays of the John McKay, first-term John Robinson, and Pete Carroll eras.

Trojans fans have long yearned to see their offensive line warriors live up to the legacies and heritage of the legendary rushing past.

With Callaway having been an offensive lineman at Alabama for legendary Crimson Tide coach Bear Bryant and having coached in the power running vacuum of the Southeast Conference, nothing during spring practice will be more intriguing than watching Callaway’s “junkyard dog” mentality flow through the cardinal and gold veins of the returning USC offensive linemen.

In today’s world of wide-open and sometimes too much finesse football for a purist, Callaway is a throwback to a bygone era, a true coaching dinosaur. It’s expected that the structured, hardline veteran line coach will bring an attitude that will elevate Trojans linemen to be highly aggressive, pain seeking, pancake loving, and disciplined-like Marines out of Camp Pendleton.

Helton is confident that Callaway will bring an “old-school” attitude that has been missing the past several seasons, or at least since the Trojans offensive line was old-school mentored by Tim Davis (2002-2004), who was a fan favorite with his “God wants four yards” and “Mass kicks ass” mentality.

With a brutal 2016 schedule that will feature defensive bullies like the Alabama Crimson Tide, Stanford Cardinal, and the Notre Dame Fighting Irish, in order for the Trojans to compete, the offensive line will have to play at a high level that will need to live up to the physical and mental expectations of Neil Callaway.

And here’s saying that if anybody can transform the Trojans offensive linemen into the new Bullies of the West – with all due respect to the Stanford Cardinal – Callaway appears to be the right man at the right time.