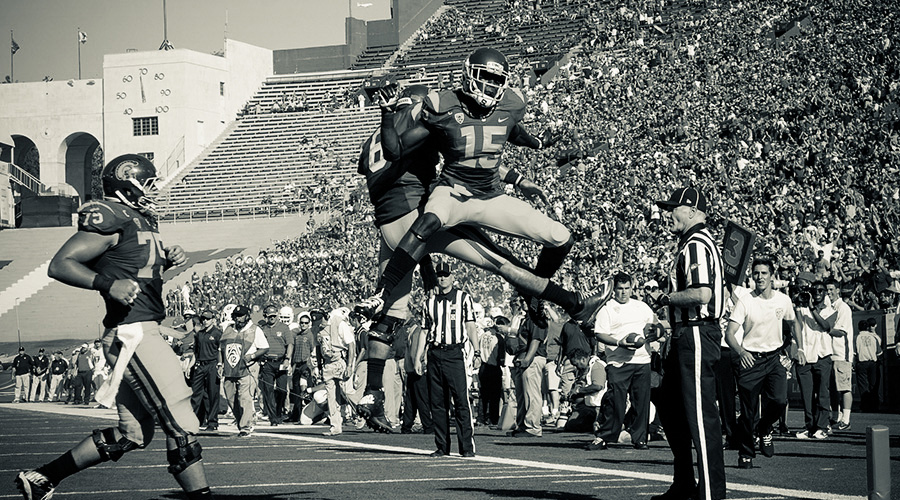 Gearing up for their matchup with Boston College coming up this Saturday, the Trojans were in shorts and shells on Wednesday, taking part in a two-hour practice session that, according to USC head coach Steve Sarksian, was marked by some sharp play on both sides of the ball.

The Trojans will leave for Boston following practice on Thursday, and with a longer-than-usual flight on the horizon, not to mention an evening kickoff time for the contest on Saturday, there are quite a few variables that could potentially throw the team out-of-whack – something Sarkisian said that they’re making every effort to avoid.

“It’s a unique challenge, going over 3,000 miles across the country to play, [and] a 8 o’clock kickoff, so it’s a chance for us to just kind of continue to stay focused on the task at hand, and not get caught up in where the game is, or what time, or what the travel is like and just focusing on the things of importance, and I think our guys are doing that so far.”

Williams gets some work in

After spending Tuesday watching from the sideline, Leonard Williams jumped back into action Wednesday – at least during the early portion of practice. The big defensive lineman participated in warm-ups and all of the individual drills before ultimately taking the rest of the day off.

“Obviously, we got more work out of Leonard today than we got yesterday, which is positive,” Sarkisian said, “and we should probably get even more tomorrow, and obviously moving toward the ball game, which is good.”

Sarkisian said that so long as Williams’ ankle allows for it, he will play on Saturday.

– Safety John Plattenburg (achilles’) watched practice from the sideline with his left foot in a boot.

– Delvon Simmons has officially been credited for blocking Stanford’s first field goal attempt on Saturday. The 6-foot-5 defensive lineman got his thumb on the 49-yard attempt.

– With both Williams and Townsend out of action, Claude Pelon lined up with the No. 1 defense at defensive end during all of the 11-on-11 periods on Wednesday.

– With Hayes Pullard suspended for the first half of USC’s upcoming game against Boston College, Michael Hutchings continued to line up with the No. 1 defense in his place at inside linebacker alongside Anthony Sarao.

– Both Viane Talamaivao and Damien Mama continued to see time with the No. 1 offense at right guard. Khaliel Rodgers also took some reps with the No. 2 group at that position.

– There was a brief place-kicking period in which both Andre Heidari and Matt Boermeester went 2-for-2 on their field goal attempts.

– Following practice, safety Gerald Bowman drew praise from Sarkisian. Bowman, who arrived at USC in 2012 from Los Angeles (Calif.) Pierce College, is making a name for himself in his redshirt-senior season. He currently ranks No. 3 on the team with 15 tackles.

“Here’s a guy that was a JC transfer, so he had a little different road of getting here,” Sarkisian said. “He got here and fought off some injuries, maybe some playing time issues, and I think he brings a senior attitude of being grateful of the opportunity, he embraces every day that he gets to be out here, and I think that is really contagious.”