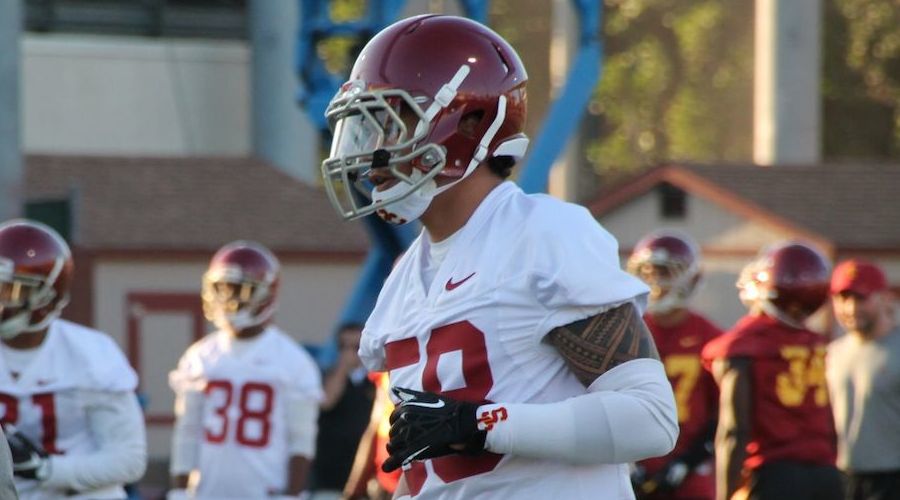 One day after the after the Trojans took part in a practice session in which they looked sluggish at times, a more focused USC team showcasing some renewed energy came out on Wednesday in preparation for Saturday’s matchup at home with Idaho.

“I thought today’s energy, intensity and focus was much better than yesterday,” Sarkisian said. “Tuesdays are always a little bit of a grind, and we had to deal with the heat yesterday. I thought the guys came out with a better focus. They knew what to expect. They knew it was going to be warm, but their energy was better, their intensity was better, their focus was better, and inevitably we had a better practice because of it.”

The day was highlighted by a one-handed catch by Juju Smith-Schuster, a pair of interceptions by Iman Marshall, a 40-yard touchdown run by Ronald Jones II, and a pick-six from Osa Masina.

For Masina, who returned a fumble 46 yards for a touchdown against Arkansas State, it was the latest in a string of standout plays that he’s made in practice as of late, and while he spent the bulk of the day running with the No. 2 defense, he did take some reps with the first unit at ‘will’ linebacker for the second consecutive day.

– After sitting out the 11-on-11 periods on Tuesday, Adoree’ Jackson (strained abdominal) took part in the entirety of Wednesday’s practice session. He took reps on both offense and defense, and he also returned kickoffs and punts.

– Starting left guard Damien Mama went down early in practice with a knee sprain. Following practice, Sarkisian said that it isn’t nearly as serious as the knee injury that hampered him as a freshman. In his place, Viane Talamaivao went with the No. 1 offense at left guard.

– Freshman tailback Aca’Cedric Ware went to the sideline mid-way through practice with a bruised knee. Sarkisian said it is not serious.

– Defensive linemen Antwaun Woods and Jacob Daniel both went to the sideline and missed the last half of practice due to illness.

– Linebacker Lamar Dawson (ribs) was limited. Sarkisian said that he is not cleared for full-contact yet, but that they are hopeful that he will be ready for Stanford next week.

– Defensive lineman Jordan Simmons (knee) did not participate in practice.

– The Trojans practiced in full pads.

– Jackson made a number of catches at wide receiver during an early service team period, including one where he had to leap high in the air to snag the ball out of the air. He certainly didn’t appear to show any sign of injury.

– During a service team period, freshman cornerback Iman Marshall made a leaping interception in the corner of the end zone. A little later he also came up with a pick in a team 11-on-11 period when a pass bounced off Soma Vainuku’s arms right to him.

– With Woods sidelined, and Claude Pelon still running with the No. 2 defense, the Trojans featured a No. 1 defensive line group over the last half of the day that included Greg Townsend and Delvon Simmons at defensive end, and Cody Temple at nose tackle.

– Sarkisian said that now that Pelon is back in the mix, a total of 10 defensive linemen are being rotated in at the three defensive line spots during practice.

– During a late 11-on-11 period Cravens batted a Cody Kessler pass down at the line, and then came back on the very next play and sacked the senior quarterback.

With reports surfacing earlier this week that Victor Aiyewa, a former Washington defensive back and safety, will release a tell-all story about Sarkisian this coming Friday, the Trojans head coach was asked if he knew what his former player was going to write about.

“I don’t know,” Sarkisian said. “I know Victor. He’s a good kid. He was always a good kid under our program. I felt like we had a good relationship. We moved his position going into his senior year from about a third string safety to starting linebacker, and he led the conference in TFLs. I had a good relationship with his family. I tried to not get his mom deported…wrote a letter so she wouldn’t get deported back to Nigeria, and gave him a great award at the Holiday Bowl. So, I don’t know.”

– Tre Madden ran up the gut for a gain of seven yards.

– Kessler completed a pass outside to Tyler Petite for seven or eight yards.

– Delvon Simmons and Scott Felix combined to stop Justin Davis for no gain.

– J. Davis made a nice cut outside and picked up close to 10 yards before Sarao made the stop.

– Cravens tackled Jones for a loss.

– Browne threw over the middle, but Masina picked it off and returned it for a score.

– Ware ran behind Chuma Edoga for a gain of around 10 yards.

– Quinton Powell batted a Browne pass down at the line.

– Browne went deep to Jalen Greene over the middle, but Isaiah Langley made a nice play and deflected the pass.

– Browne connected along the sideline with George Katrib for a gain of 20 yards with Jonathan Lockett in coverage.

– Kessler threw a pass, but Cravens batted it down at the line of scrimmage.

– Browne’s pass bounced off Vainuku’s hands, and Marshall came up with the pick near the sideline.

– Browne connected with Christian Tober outside for a gain of 15 yards.

– Pelon and a host of others swarmed J. Davis for no gain.

– Jones ran up the middle, then cut outside and broke loose for a 40-yard touchdown.

– Rasheem Green and a host of others stopped Dominic Davis for no gain.

– Smith-Schuster made a one-handed catch before falling out-of-bounds on a pass thrown by Kessler.

– Kessler hit Darreus Rogers over the middle for a gain of close to 15 yards.

– Kessler hit De’Quan Hampton over the middle for close to 10 yards.

– Kessler connected with Jalen Greene outside for a gain of 20 yards.

– Browne hit Tober over the middle for around 15 yards before Marvell Tell made the stop.

– Browne hit Petite over the middle for 10 yards before John Plattenburg made the stop.

– Browne went deep to Tober, but Leon McQuay III broke up the pass.

– Madden broke off a 15 yard run behind Toa Lobendahn and Zach Banner.

– Olajuwon Tucker and Co. stopped Madden after a short gain.

– Browne went long to Greene who made a nice 35-yard grab while falling on his back.