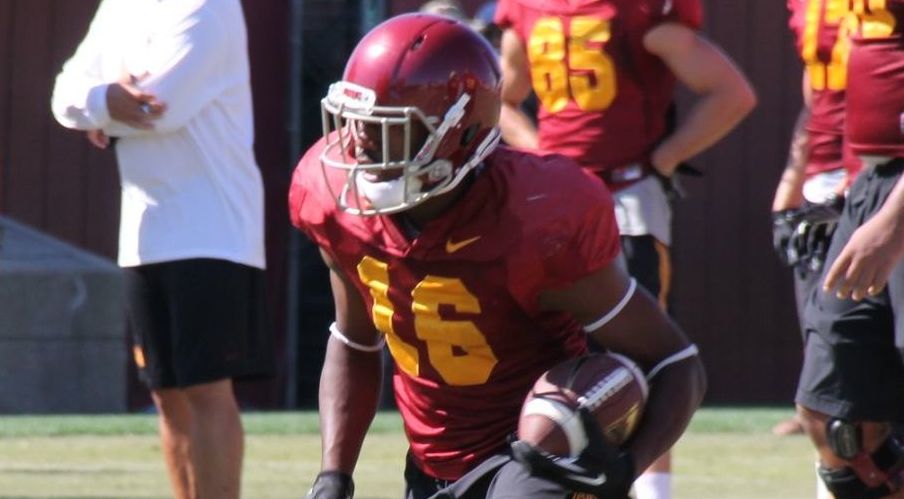 The Trojans were back at work on Wednesday, and while USC head coach Steve Sarkisian is encouraged by the way that his team has responded coming off a 41-31 loss to Stanford, he’s also well aware of the challenge that they’re set to face this Saturday in Pac-12 South foe Arizona State (2-1).

“Obviously tomorrow we need to polish things up, fine-tune the details, but I like the frame of mind of the team right now,” Sarkisian said. “I think they’re chomping at the bit to get back on the field and compete and play, and we’re going to need a quality effort. The more we continue to watch Arizona State, they’re a good football team. Even when you look at the [Texas] A&M game. You can look at the score and think, ‘Oh, they got beat by a few touchdowns.’ It was a one-score game with four minutes left, so they probably played better than people are giving them credit for, and we’re definitely going to have our work cut out for us Saturday night.”

No one was swarmed by more reporters and cameras following Wednesday’s practice than USC defensive coordinator Justin Wilcox, who has received plenty of focus from the media and fans following the Trojans’ 41-31 loss to Stanford.

In looking back at the game, Wilcox cited a lack of execution as a primary reason for the Trojans’ struggles on defense, while also shouldering his share of the responsibility as well.

“I think kind of the critical mistakes you look at on every drive, there was just a play that we didn’t execute well enough,” Wilcox said. “And at the end of the day, all of it’s going to come back to the down in, down out execution, and we didn’t do a good enough job of that. And it all starts with the coaches, and we’ve got to go out and give those guys the best chance to succeed. So, that’s what you come back and work on. It’s unacceptable how we played, and that’s why we come back and meet and go to work. I know our guys are going to come back and fight, and we all expect to play better than that.”

Freshman blind long-snapper Jake Olson participated in an 11-on-11 field goal period for the first time since joining the team last week.

With Olson wearing a no-contact yellow jersey, and no rush being administered, he delivered a perfect snap with placekicker Matt Boermeester capping the play off with a 35-yard-plus make.

“We used our normal cadence, and he had a perfect snap and made the kick, so that was really awesome to see,” Sarkisian said. “I think it puts a lot of things into perspective for a lot of people around here that life is pretty good. When you’re having a bad day and you see that go out there and snap the ball, and do it the way he did, it’s pretty inspiring.”

Sarkisian said that Olson will likely be called upon to snap in a game at some point in the future, but that in order for it to happen, it will have to come about as a result of an agreement with the opposing team.

– Scott Felix (shoulder) returned to full action on Wednesday, spending a majority of the practice session with the No. 1 defense at rush end.

– Tailback Tre Madden (calf), cornerback Kevon Seymour (knee) and defensive lineman Antwaun Woods (shoulder/tailbone) continued to be limited. Of the injured trio, Madden probably got the most work in, taking some reps with the offense during the 11-on-11 scout team periods. On Seymour, Sarkisian said that he doesn’t look 100 percent right now, and that in order for him to play against Arizona State, he would need to have a productive workout on Thursday.

– Defensive linemen Jordan Simmons (knee) and Kevin Scott did not participate in practice.

– With Woods sidelined, Claude Pelon continued to run with the No. 1 defense at nose tackle alongside Delvon Simmons and Greg Townsend Jr.

– JuJu Smith had a pair of one-handed grabs during an early one-on-one period, including a deep ball down the sideline with Iman Marshall in coverage.

– Adoree’ Jackson had a nice play during the same period where he burned Leon McQuay III down the middle of the field to haul in a long touchdown pass. Jackson saw time at cornerback and wide receiver on Wednesday.

– Porter Gustin applied pressure on Cody Kessler, forcing the senior quarterback to throw the ball away.

– Kessler connected with Darreus Rogers over the middle for a gain of 10 yards before Marshall made the stop.

– Kessler again found Rogers, this time outside for a gain of around eight yards.

– Rasheem Green tipped a Kessler pass at the line, and it fell incomplete.

– Ronald Jones III ran for a gain of seven or eight yards outside before McQuay made the stop.

– Quinton Powell pressured Browne, and he threw the ball away.

– Kessler hit Christian Tober outside for a gain of close to 10 yards before Chris Hawkins made the stop.

– Justin Davis ran inside for a gain of five or six yards.

– D. Davis bounced outside and broke loose for a 35-yard touchdown, outracing Marvell Tell at the end.

– Aca’Cedric Ware picked up seven or eight yards on the ground.

– D. Davis ran outside for again of 10 yards before being pushed out-of-bounds.

– Kessler hit Rogers outside for a gain of close to 20 yards before Hawkins made the stop.

– Kessler hit Isaac Whitney outside for a gain of eight yards before Jonathan Lockett made the stop.

– Kessler hit JuJu Smith-Schuster over the middle, who then bounced outside for a 25-yard gain before McQuay delivered a big hit near the sideline that sent Smith-Schuster flying into some tackling bags.

– Browne connected with D. Davis over the middle for a 35-yard touchdown.

– Browne hit Steven Mitchell Jr. outside for a gain of 10 yards.

– Kessler found a wide-open Jones outside with a quick pass, and the freshman darted off for a 35-yard touchdown.

– Darnold’s pass was picked off by Lockett.