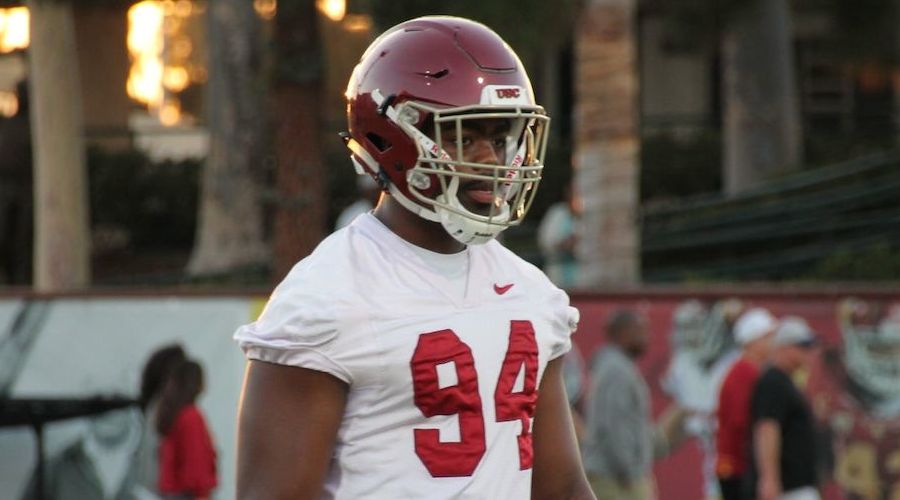 Gearing up Saturday’s matchup with Arkansas State, the Trojans were back on Brian Kennedy-Howard Jones Field on Wednesday morning, taking part in another full-pads practice session.

A workout that featured plenty of special teams work to begin the day, it was also marked by a strong showing by the defensive front seven, which, in contrast to Tuesday’s practice, didn’t allow Tre Madden and the rest of the USC running backs to find much room to run for most of the day.

“I thought the guys were really focused and intense,” said USC head coach Steve Sarkisian. “I thought the defense’s pad-level and physicality was better today than it was yesterday, which was encouraging. The offense didn’t run the ball as well as they did yesterday when we went goods on goods, which is obviously a positive for us when the defense is playing like that. They made it difficult on us. But I liked the intensity.”

Jackson spends time on both sides of the ball

Adoree’ Jackson had another busy day, spending the majority of practice on defense at cornerback, but also taking reps at wide receiver during some of the 11-on-11 periods.

As usual, he was stellar for the most part, just missing out on an interception at one point while lined up at cornerback, and hauling in a deep pass along the sideline at wideout during an early team period. A little, however, there was a rare instance where he failed to make an easy play, dropping a long pass down the middle of the field.

Jackson was visibly frustrated for a short time following the drop, but after what he’s shown throughout the last month, Sarkisian said that he wasn’t concerned in the slightest.

“I don’t know a great competitor that hasn’t come off to the side and been upset when they didn’t make a play that they’re accustomed to making,” Sarkisian said. “I actually called him over after and said, ‘you know, I’m not worried about it. You’re going to catch it on Saturday.’ And he kind of laughed at me. And I said, ‘No, I’m serious. You will.’ And we’re going to call it and he’ll catch it.”

Limited throughout the vast majority of fall camp at USC following the knee surgery that he underwent in his senior year at Gardena (Calif.) Serra, defensive lineman Rasheem Green has taken part in the entirety of practice in each of the past two days, and Sarkisian revealed on Wednesday that the big freshman is now fully cleared.

Lining up at defensive end with the No. 2 and No. 3 units, Green has looked surprisingly sharp, and he caught everyone’s attention with a nice stop at the line-of-scrimmage on Aca’Cedric Ware during an early 11-on-11 period on Wednesday. He’s obviously made a quick impression on his head coach, who, following practice, said that Green will definitely play against Arkansas State.

“He’s really performed well the last two days,” Sarkisian said. “For a big man he’s very explosive. He’s got long arms, and he’s explosive and he’s made really good progress coming off the injury, and we’re excited to see him play. He hasn’t gotten as much work as the other guys, and so we’ll have to see how he goes throughout the ball game, but he’s looked really good the last two days.”

– Among those who did not practice on Wednesday were Justin Davis (ribs), Lamar Dawson (ribs), Claude Pelon (knee), Jordan Simmons (knee) and Jordan Austin, who was on crutches with a boot on his right foot.

– Following practice, Sarkisian said that Davis, Dawson and Pelon are all “really doubtful” for Saturday, and that they are hopeful to come back the following weekend for the Trojans’ game against Idaho.

– Ykili Ross wore a yellow non-contact jersey, but he did participate in the entire practice.

– Taylor McNamara, who went to the sideline after feeling lightheaded on Tuesday, returned on Wednesday and participated in the entire practice session.

– For the second consecutive day the No. 1 offensive line group throughout the entire session was comprised of Chad Wheeler at LT, Damien Mama at LG, Max Tuerk at C, Toa Lobendahn at RG, and Zach Banner at RT.

– Freshman tailback Ronald Jones II had the arguable play of the day, taking a handoff up the middle before putting an outstanding juke on Matt Lopes and breaking loose for a 40-yard touchdown.

– Freshman tight end Tyler Petite had a strong day showing off his pass-catching skills, closing practice out with a juggling catch near along the sideline.

– Following practice Sarkisian noted that there are 10 graduate students on this year’s team — seven of whom start.

– Among those in attendance were former Trojans players Al Cowlings and Shaun Cody.

– Kessler tried to hit Steven Mitchell Jr. over the middle, but Sarao got a hand up just in time to deflect the pass.

– Kessler hit Christian Tober over the middle for a 15-yard gain.

– Kessler tried to hit JuJu Smith-Schuster over the middle, but Uchenna Nwosu broke up the play.

– Max Browne connected with Isaac Whitney outside for a gain of close to 15 yards.

– Green stopped Ware for no gain.

– Browne hit Whitney over the middle for a 10-yard gain before Jalen Jones made the stop.

– Kessler hit Tober outside for a gain of seven or eight yards.

– Felix and a host of others stopped Ware after a short gain.

– Cody Temple swallowed Dominic Davis up at the line-of-scrimmage.

– Petite leapt up high and hauled in a Browne pass over the middle before Marvell Tell put a nice hit on him.

– Browne connected with Smith-Schuster along the sideline for a gain of close to 20 yards.

– Kessler hit D. Davis with a quick pass outside, but Su’a Cravens was there to stop the play for no gain.

– Kessler hit Tober over the middle for a gain of around 15 yards.

– Kessler connected with Mitchell outside for a gain of 10 yards before Jonathan Lockett made the stop.

– Browne tried to hit Whitney over the middle, but Jackson was there to deflect the pass – just missing out on an interception.

– Browne hit De’Quan Hampton outside for a gain of seven yards.

– Browne tried to connect with Whitney outside, but Leon McQuay III broke up the pass.

– Kessler went deep to Petite, but John Plattenburg broke up the play.

– Sam Darnold scrambled and picked up close to 10 yards on the ground.

– Darnold threw outside to Petite, who made a juggling grab along the sideline.