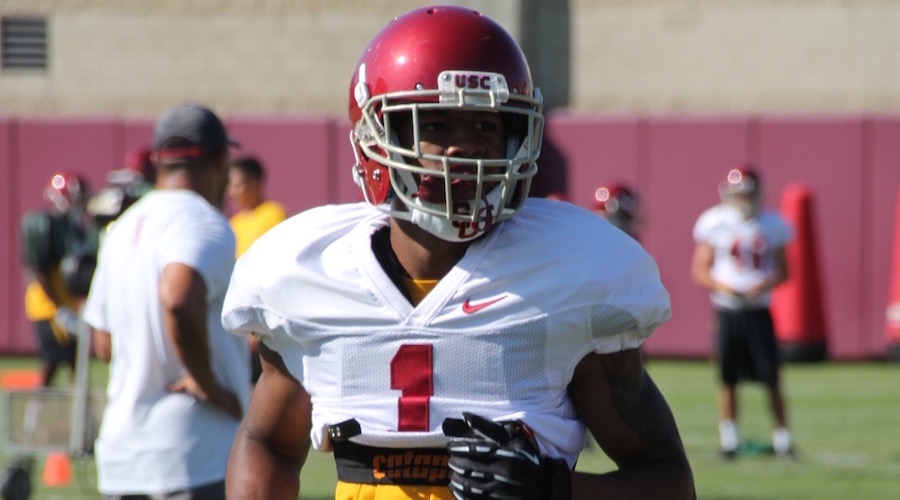 With last weekend’s loss to Alabama still fresh in their mind, and Utah State coming up on Saturday, the Trojans took part in a two-hour practice on Wednesday that, for the second consecutive day, was marked by physicality and competitive play.

That was particularly the case during the final 11-on-11 period which featured the No. 1 offense squaring off with the No. 2 defense, and the No. 2 offense going head-to-head with the No. 1 defense. With both sidelines hooting and hollering, highlights included Darreus Rogers taking a quick pass and juking out both Jack Jones and Jordan Iosefa on his way to a long gain, Chris Hawkins putting a big pop on wide receiver Michael Pittman following a reception near the sideline, and to end the day, Adoree’ Jackson making an athletic leaping pass break-up in the end zone on Sam Darnold’s toss to Josh Imatorbhebhe.

Lobendahn status up in the air for Saturday

USC starting center Toa Lobendahn did not practice for the second day in a row due to a swollen knee. Having had fluid drained from the knee on Tuesday night, Helton said that they are now awaiting results from an MRI that was taken earlier the same day.

Nico Falah has been running with the No. 1 offense in place of Lobendahn this week, and Helton is still uncertain if he will be able to play against Utah State.

“He’s feeling better today, but when you have a kid that has a couple knee surgeries, you’re going to be ultra-careful with it,” Helton said. “Right now it’s about 50-50. I’ll get some better answers after I talk to the doctors tonight.”

No repeat of pre-game entrance

There has been some criticism directed the Trojans’ way for the team’s hyped-up pre-game entrance at AT&T Stadium last weekend. In regard to the incident, Helton said that some players let the atmosphere of the big game get the best of them, and that he has discussed the issue with them to ensure that it doesn’t happen again.

“One of the things I was just really honest with them about was good teams don’t worry about the pageantry of games,” Helton said. “They worry about doing their job in that type of atmosphere, and that’s it.”

– In addition to Lobendahn, others who did not participate in practice were Noah Jefferson (shoulder sprain), John Plattenburg (concussion) and Khaliel Rodgers (hamstring).

– Wide receiver Deontay Burnett went to the sideline due to a shoulder sprain.

– Helton said that Jefferson is “questionable” to play on Saturday.

– Helton said that Plattenburg has a series of 21 tests that he must pass before returning to action after suffering a concussion in fall camp. He has yet to do so, so he remains out.

– Inside linebacker Quinton Powell returned to practice after sitting out Tuesday’s session due to illness. He ran with the No. 2 defense at times at the WILL spot.

– Safety Jamel Cook continued to get more work in, taking part in individuals.

– Chuma Edoga continued to run with the No. 1 offense at left tackle. Chad Wheeler went with the No. 2 group.

– For the second straight day Damien Mama lined up with the No. 1 offense at left guard for virtually the entire practice. Chris Brown ran with the No. 2 group.

– Cornerback Jack Jones had a very strong showing on Wednesday. During an early 11-on-11 period he intercepted a Sam Darnold pass intended for Michael Pittman, before breaking up another pass from Darnold to De’Quan Hampton one play later. He also put a big hit on tailback Chris Edmondson during a service team period.

– In addition to his hit on Pittman near the end of the day, Hawkins also put a big pop on Daniel Imatorbhebhe as the tight end tried to bring in a pass over the middle from Max Browne, and the pass fell incomplete.

– One player who stood out on offense was Dominic Davis. The shifty tailback came up with some nice plays rushing the ball, as well as a receiver coming out of the backfield.

– Keyshawn “Pie” Young came up with an interception during a service team period.

– During a brief field goal period Matt Boermeester made his lone attempt from 45 yards out. Reid Budrovich went 2-for-3, with a long of 45 yards.

“We’ve got him in some situational stuff,” Helton said. “You can look for him in red zone and short-yardage situations.”

– Former Trojans players Shaun Cody and Jeremy Hogue were among those in attendance.

– Browne hit Taylor McNamara outside for a gain of 10 yards.

– Browne hit Rogers over the middle for a gain of close to 10 yards.

– Browne hit Isaac Whitney over the middle for a gain of around 15 yards.

– Browne hit JuJu Smith-Schuster outside for a gain of 6 or 7 yards with Adoree’ Jackson in coverage.

– Browne hit D. Imatorbhebhe over the middle, but Hawkins jarred the ball loose to make it an incomplete pass.

– Darnold tried to hit Pittman outside, but J. Jones intercepted the pass.

– Darnold tried to hit Hampton outside, but J. Jones broke up the pass.

– Darnold tried to hit Jalen Greene outside, but Matt Lopes broke up the pass.

– Darnold hit Tyler Vaughns outside for a gain of 10 yards.

– Browne hit D. Davis outside for a gain of around 20 yards.

– Browne hit Smith-Schuster outside for a gain of 6 or 7 yards.

– Browne hit D. Davis outside for a gain of close to 10 yards before Olajuwon Tucker made the stop.

– Browne hit Justin Davis over the middle for a gain of 10 yards before Ykili Ross made the stop.

– Browne hit D. Imatorbhebhe over the middle for a 30-yard TD.

– Darnold hit Cary Angeline over the middle for a big gain.

– Browne hit Rogers outside, and he juked out both J. Jones and Iosefa on his way to a big gain.

– Darnold hit Pittman outside and Hawkins put a nice pop on him.

– Darnold hit J. Imatorbhebhe outside for a gain of 11 or 12 yards.

– Darnold went deep to J. Imatorbhebhe in the end zone, but Jackson broke it up.