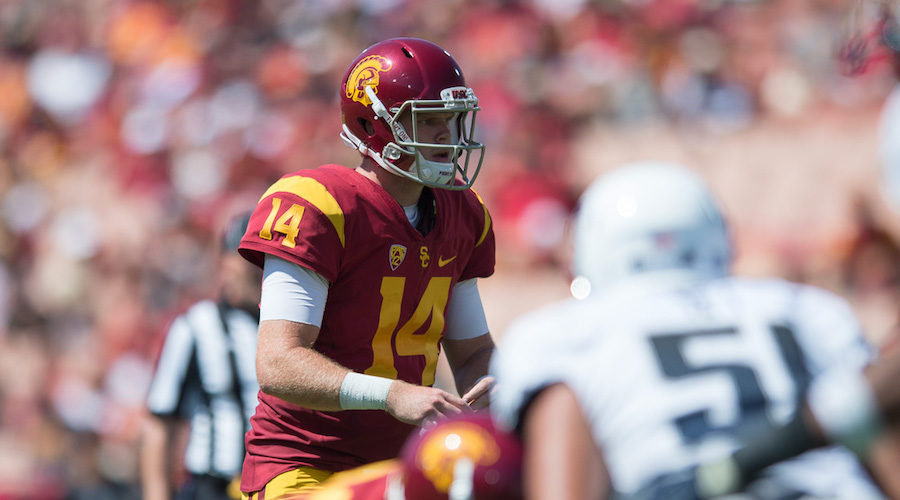 The Trojans went back to work on Wednesday in shorts, shoulder pads and helmets, and with Saturday’s matchup with Arizona State now just three days away, USC head coach Clay Helton said there were two major points of emphasis during the two-and-a-half hour session.

On defense, for the second consecutive day, it was preparing for Sun Devils dual-threat passer Manny Wilkins, with Trojans cornerback Ajene Harris – a high school quarterback – once again donning a black service team jersey with Wilkins’ No. 5 on it, providing the defense with his best impression of the talented redshirt-sophomore. Jalen Greene, who also saw extensive time at quarterback on Tuesday, lined up exclusively at wide receiver on Wednesday.

“After watching even more film, I am beyond impressed with Manny Wilkins and his pocket-sense of being able to create off pass attempts,” Helton said. “You look at his 13-plus running attempts, a lot of them come from dropback pass opportunities. He’s finding windows of opportunity [and] keeping his eyes downfield, but also creating yards with his legs. He’s as good as I’ve seen thus far that we’ve played in that area.”

Offensively, the focus was on gearing up for Arizona State’s pass rush. The Sun Devils have compiled 11 sacks through the first four game of this season, and they figure to come after Trojans redshirt-freshman quarterback Sam Darnold – who will be making just his second start – early and often.

“This is one of the better pressure groups that we’ll play,” Helton said. “Very similar to what Utah did to us last week. It’s something that we really focused on, and I would expect them to go after a young quarterback with that.”

The group responsible for protecting Darnold from that pass rush, the offensive line, showcased a variety of personnel looks at different times on Wednesday.

The unit still didn’t have starting right tackle Zach Banner completely back in the fold. Banner, who suffered an ankle injury against Utah, took part in warm-ups as well as an initial service team period before taking the remainder of the day off. Helton said that he does anticipate the senior captain making a full return on Thursday, however. Jordan Simmons continued to run with the No. 1 unit at right tackle in his absence.

Starting left guard Damien Mama, who suffered a stinger on Tuesday, was back in action, but he too, got some extended rest, and he appeared to split time with Chris Brown. Brown also took some brief reps at left tackle.

Chuma Edoga, who did not play in the Utah game due to illness, appeared to make a full return on Wednesday. He spent most of the day with the No. 2 offense at left tackle, but he also took some brief reps with the No. 1 offense at right tackle.

– Among those who did not participate in any portion of practice on Wednesday were Jamel Cook (foot), Matt Fink (ankle), Noah Jefferson (shoulder/academics), Clayton Johnston and Velus Jones.

– Khaliel Rodgers (wrist) and Dominic Davis (knee) suffered injuries on Wednesday, but Helton believes that both are minor.

– Jack Jones (ankle) took part in warm-ups before taking the rest of the day off. Helton said that the freshman cornerback is farther along in terms of his recovery than he thought he would be at this point.

“He should be close to being back tomorrow,” Helton said.

– Safety John Plattenburg (concussion) got even more work in on Wednesday, taking part in some of the service team periods with the No. 2 defense.

– Freshman tailback Vavae Malepeai (scapula) was suited up, once again running off to the side with a trainer, and he appeared to be going at close to full-speed.

– Darnold and DeQuan Hampton connected for the likely play of the day, with the young quarterback hitting the big receiver for a 35-yard touchdown in the final 11-on-11 period of the day.

– There was an initial 11-on-11 period that was unique in that it featured the No. 1 offense going up against the No. 1 defense. Darnold did well in this period, completing midrange passes to Steven Mitchell Jr. and Daniel Imatorbhebhe, a 25-yarder to JuJu Smith-Schuster, and a quick pass outside to Justin Davis, who darted off for a 30-yard TD.

– Marvell Tell also came up with a sack on Darnold in that same period.

– Adoree’ Jackson, who returned a kickoff 100 yards for a touchdown against Utah, but also lost his shoe in coverage on the Utes’ game winning touchdown pass, revealed that was wearing new shoes on Wednesday.

– Darnold hit Mitchell outside for a gain of 11 or 12 yards.

– Darnold hit D. Imatorbhebhe outside for a gain of close to 10 yards.

– Darnold hit Smith-Schuster outside for a gain of 25 yards.

– Darnold hit J. Davis with a quick pass outside, and he made his way for a 30-yard TD.

– Browne hit Hampton over the middle for a 15-yard gain.

– Browne hit Taylor McNamara over the middle for a gain of 10 yards before Ykili Ross made the stop.

– Darnold hit D. Imatorbhebhe outside for a gain of around 7 yards.

– Browne hit Trevon Sidney outside for a gain of 20 yards.

– Browne hit Sidney over the middle for a gain of around 15 yards.

– Darnold hit Smith-Schuster outside for a gain of around 10 yards.

– Darbold hit J. Davis outside, with the tailback weaving his way for a big gain.

– Browne hit Tyler Vaughns outside for a gain of close to 10 yards.

– Browne hit Josh Imatorbhebhe outside for a 20-yard gain.

– Browne hit Sidney outside for a gain of around 15 yards.