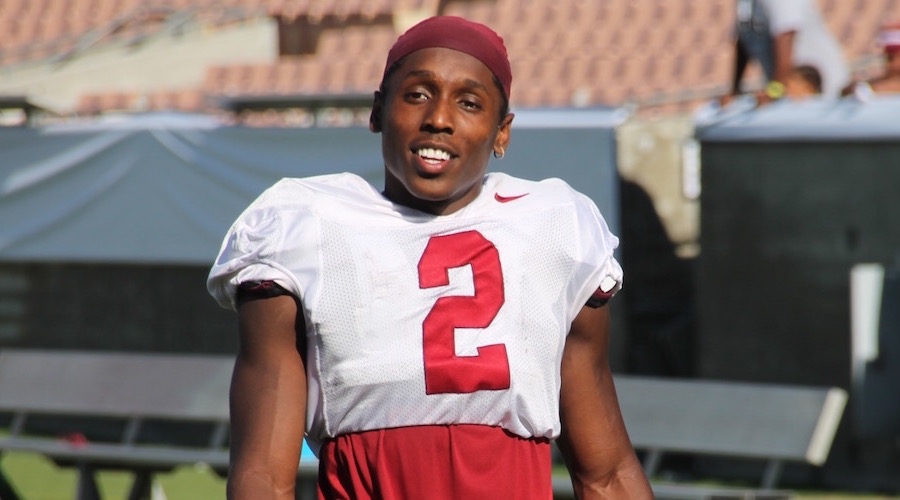 The USC head coach noted that there was a special emphasis placed on third-down situations throughout the two-hour session, and with Stanford star playmaker Christian McCaffrey specifically in mind, that was especially the case on the defensive side of the ball.

The Cardinal running back put up big numbers in both meetings with the Trojans last season, particularly in Stanford’s 41-22 Pac-12 championship victory over USC, when he racked up 461 all-purpose yards.

“Going back to the two games last year, we really saw how important getting off the field defensively is, and in studying the tape, how many times No. 5 is targeted for them, and it’s everywhere – anywhere from in the backfield, to even last week being separated out at the wide receiver position,” Helton said. “So, we worked heavily on that today.”

Helton said that it’s McCaffrey’s big-play ability both as a ball-carrier as well as a receiver that makes him such a difficult weapon to prepare for on defense.

“When you’ve got the combination of both, you’ve got to make a decision about what you’re going to do,” Helton said. “Are you going to load the box and play man coverage and put him in one-on-one situations? Or, are you going to play back and play more of a zone coverage, and all of a sudden they’re running the ball with those big linemen? You’ve got to mix and match. It will be a great chess match between Coach [David] Shaw and [USC defensive coordinator] Clancy Pendergast of mixing it back-and-forth, and being able to load the box, play zone, play man pressure, all of the different things that he does, and thank goodness he’s here.”

Freshman Velus Jones, once again, wore a No. 5 jersey with the scout team offense on Wednesday, giving the No. 1 defense his best impression of McCaffrey.

“Even when we use our service teams we try to put the best athletes that we can out there, and Velus is a great one with true speed,” Helton said. “It’s been good to use him. Not only is he a great runner with the ball, but he’s also a receiver as you know, so he’s giving us a great look when we have used our service teams.”

– Among those who did not participate in practice were Jamel Cook (foot), Noah Jefferson (shoulder) and John Plattenburg (concussion).

– On Jefferson, Helton added that he, “probably will be out for this game.”

– Offensive lineman E.J. Price and quarterback Matt Fink both went to the sideline with undisclosed injuries, and neither player returned. Of the two, Fink’s injury appeared to be more significant.

– After being limited on Tuesday, safety Marvell Tell (concussion) was full go on Wednesday, and Helton announced that he has been cleared to play against Stanford on Saturday.

– Running back Ronald Jones II, who was limited on Tuesday due to a thigh contusion and rib injury, also appeared to make a full return on Wednesday.

– After missing practice on Tuesday due to illness, offensive lineman Zach Banner returned and ran with the No. 1 offense at right tackle.

– The entire No. 1 offensive line unit had Chad Wheeler at LT, Damien Mama at LG, Nico Falah at C, Viane Talamaivao at RG and Banner at RT. Chuma Edoga also took periodic reps with the No. 1 group at both left tackle and right tackle.

– Cornerback Adoree’ Jackson had a big day, compiling back-to-back interceptions during the final 11-on-11 period. Both picks came on passes thrown by Sam Darnold.

– JuJu Smith-Schuster came up with the offensive play of the day during the same period, hauling in a 40-yard touchdown pass down the seam from Max Browne.

– Tight end Taylor McNamara and cornerback Jack Jones got into a brief scuffle at one point, but both players were separated fairly quickly.

– Also on hand were NFL scouts from the Arizona Cardinals and Cleveland Browns.

– Browne hit Smith-Schuster outside for a gain of close to 10 yards.

– Browne threw outside to Smith-Schuster, but Leon McQuay III came up in a hurry and limited the play to a short gain.

– Browne threw outside to Jalen Greene, but Iman Marshall was in tight coverage and the ball fell incomplete.

– Browne hit Smith-Schuster over the middle for 10 yards.

– Darnold hit Deontay Burnett outside for a gain of around 15 yards.

– Darnold hit Michael Pittman along the sideline for a gain of around 30 yards.

– Browne tried to throw outside, but Jordan Iosefa jumped up and batted the ball down.

– Browne hit Smith-Schuster down the seam for a 40-yard TD.

– Browne hit Isaac Whitney outside for a short gain before J. Jones made the stop.

– Darnold hit Pittman outside for a 10-yard gain despite tight coverage from Marshall.

– Darnold’s pass was batted down by Porter Gustin and others at the line.

– Darnold tried to hit Trevon Sidney outside, but Jackson made the pick.

– Darnold again tried to hit Sidney, but again Jackson made the interception.

– Darnold hit De’Quan Hampton outside for a gain of around 20n yards.

– Darnold tried to hit Dominic Davis, but Jonathan Lockett broke up the pass.

– Malik Dorton and Co. stopped D. Davis for no gain.