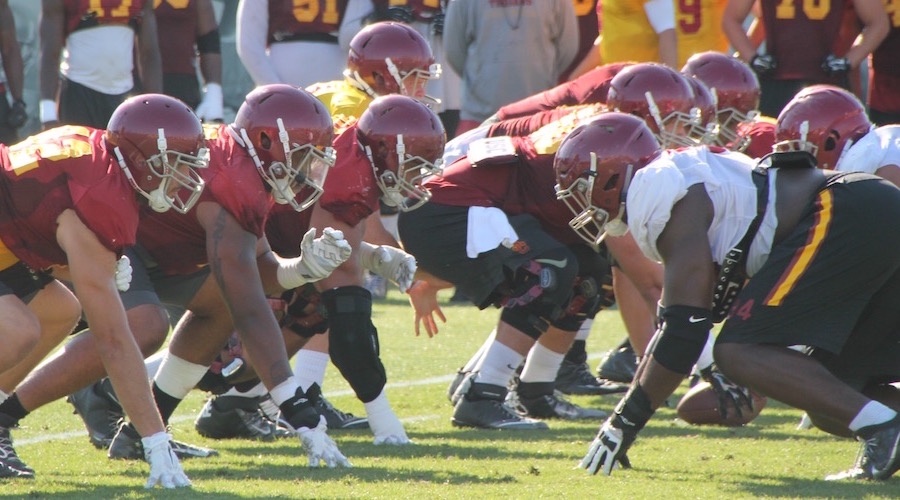 It was practice No. 16 for the Trojans on Wednesday afternoon, but the biggest news coming out of the two-hour workout didn’t have anything to do with what took place on the field, but instead in the classroom. USC head coach Clay Helton announced that the entire team has officially been declared academically eligible for the upcoming season.

”Credit to [Senior Associate Athletic Director] Dr. Magdi El Shahawy and his crew,” Helton said. “That SAAS [Student-Athlete Academic Services] program is second to none. A two million dollar budgeted program that literally guides our kids through their academic success. A very, very great credit to them. They’ve established not only one of the highest team GPAs, but one of the highest APRs, which will be coming out in the upcoming year.”

As for the practice itself, with the team dressed in shorts, shoulder pads and helmets, it was another session heavy on 11-on-11 and situational work.

In the quarterback competition, both passers had solid days, particularly Darnold, who drew praise from Helton following practice for his performance. The redshirt-freshman opened up practice with a beautiful 40-yard touchdown toss to Trevon Sidney, and he also threw three touchdown passes to JuJu Smith-Schuster during a 7-on-7 red zone period.

Browne, meanwhile, had some highlights of his own, hitting Velus Jones for a touchdown in that same 7-on-7 period, and he also came up with his best run of camp during an early 11-on-11 period, scrambling out of the pocket before taking off down the left side of the field for a big gain. He did, however, also throw an interception, with safety Matt Lopes picking off one of his passes at the goal line.

Lopes, who lined up with the No. 1 defense at safety when the unit was in a nickel set, also intercepted a deep pass thrown by Matt Fink on the final play of practice.

With less than three weeks to go until USC opens up against Alabama in Arlington (Texas), Helton said that he is pleased with where his team, as a whole, is at right now.

“The progress that we’ve made, especially defensively from Day 1 of spring ball until now, we’re right where we need to be,” Helton said. “We’ve got two days of grinding football left, and then we’ll get into our mock-game week starting next Sunday, and really have two weeks of preparation for Alabama.”

– The Trojan Marching Band made a special appearance, playing throughout the tail-end of practice in the north end zone on Howard Jones Field.

“It was great to have Dr. [Art] Bartner out here with the band,” Helton said. “The guys said they wanted some music. I thought I’d bring the best music that you can get, and that’s our band. We thoroughly enjoyed having them out here.”

– Offensive lineman Damien Mama, and defensive linemen Rasheem Green and Stevie Tu’ikolovatu all went to the sideline during practice with injuries. Mama went out due to the ankle injury that he originally suffered on Tuesday. Green suffered a knee contusion. Tu’ikolovatu, meanwhile, was pulled out late in practice due to a minor hip injury. Helton said he was taken out as a precautionary measure.

– After injuring his shoulder on Tuesday, tight end Taylor McNamara returned and took part in the entire practice session.

– Linebacker Jabari Ruffin and defensive lineman Jacob Daniel were dressed out, but they did not appear to do much in the way of work on Wednesday.

– Cameron Smith and Michael Hutchings, once again, ran with the No. 1 defense at the two inside linebacker spots – Smith at MIKE, and Hutchings at WILL.

– Freshman Jordan Iosefa, who had been lining up exclusively at the SAM outside linebacker position, took some brief reps on the inside on Wednesday at the MIKE spot with one of the reserve groups.

– The primary No. 1 interior defensive line unit consisted of Rasheem Green at DT, Tu’ikolovatu at N, and Malik Dorton at DT. The No. 2 group was comprised of Liam Jimmons at DT, Khaliel Rodgers at N, and Josh Fatu at DT. Christian Rector was also in there with the No. 2 group at times at one of the DT spots.

– Chris Hawkins and Leon McQuay III were the primary safeties with the No. 1 group, although, as noted above, Lopes came in for one of the defensive tackles when Clancy Pendergast went to the nickel package.

– Former Trojans players D.J. Morgan, Connor Spears and Thomas Williams were among those in attendance.

– In addition to announcing USC’s starting quarterback on Sunday, Helton said that he will also release an official two-deep on the same day.

– Browne hit J. Davis outside, who put a nice juke on Adoree’ Jackson to pick up a total of 8 or 9 yards down the sideline.

– Browne hit McNamara down the middle, but Marshall got a hand in and popped the ball out to make it incomplete.

– Darnold hit Smith-Schuster down the middle for a 15-yard TD.

– Darnold hit Smith-Schuster down the middle for a 20-yard TD.

– Darnold hit Smith-Schuster outside for a 12-yard TD.

– Browne tried to hit Deontay Burnett outside, but Lopes broke up the pass.

– Browne tried to hit Greene down the middle, but Lopes intercepted the pass at the goal line.

– Browne hit V. Jones in the corner of the end zone for a 5-yard TD.

– Darnold tried to hit Burnett outside, but Osa Masina broke up the pass.

– Darnold hit Sidney along the sideline for a 40-yard TD.

– Browne scrambled and ran outside for a big gain.

– Darnold tried to hit Reuben Peters down the sideline but Deion Hart broke it up.

– Browne hit Tyler Petite outside for a gain of 6 or 7 yards.

– Darnold hit Josh Imatorbhebhe outside for a gain of 5 or 6 yards.

– Browne hit Rogers outside for a gain of 13 yards.

– Browne hit Michael Pittman outside for a gain of around 10 yards.

– Darnold hit Tyler Vaughns over the middle for a gain of 10 yards.

– Darnold hit Greene outside for a gain of around 15 yards.

– Darnold went deep to Mitchell, who made a juggling catch for a gain of around 35 yards.

– The exchange between Darnold and ware was fumbled, and Connor Murphy recovered it.

– Darnold hit Hampton for a gain of around 10 yards.

– Fink went deep to Velus Jones, but Lopes came up with the pick.