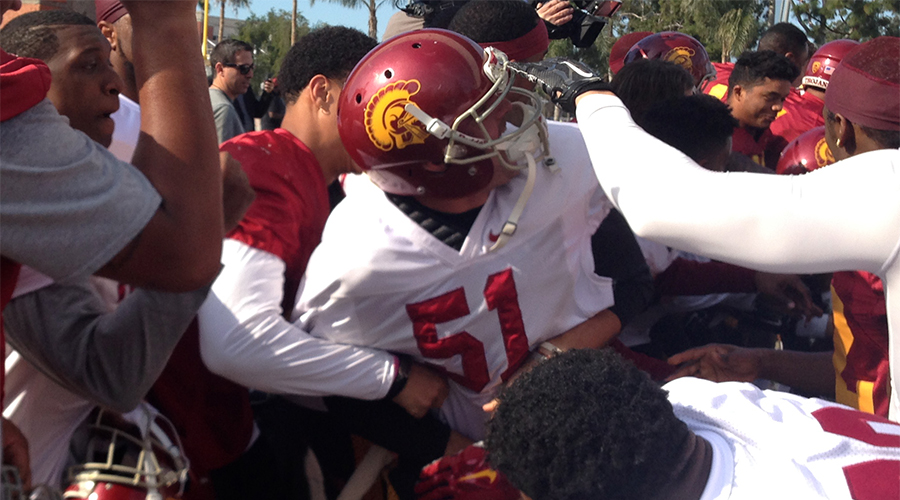 After having spent the previous three days on Cromwell Field due to rain, the Trojans returned to Brian Kennedy-Howard Jones Field on Wednesday morning, taking part in their final practice session of the season at home. They will now get two days off for the holidays before heading down to San Diego on Saturday, where they’ll continue preparations for their Dec. 30 clash with Wisconsin.

With it being the last workout of the year on campus, the team continued the ritual of trading jerseys with one another, and their were some interesting combinations, with quarterback Cody Kessler swapping with Damian Mama to wear No. 51, and 6-foot-9 offensive tackle Zach Banner trading with Darreus Rogers to wear No. 1.

“They love to trade jerseys,” Helton said, “so all the O-Linemen get all of the skinny-men jerseys, and look like big people, and then it makes it hard for me to tell who is who, but they have fun with it.”

More significantly, the seniors on the team also continued the tradition of exiting the field through a gauntlet of underclassmen forming a tunnel, many of whom were eager to get one last shot in at their departing teammates.

Following practice, Helton discussed those seniors, noting his appreciation for a unique group that has had to overcome a number of challenges in their time on campus – including five head coaching changes.

“It will be a group that I won’t forget, just the way that they’ve handled things with their class and their maturity, and just the way that they have kept fighting through adversity,” Helton said. “I’ve always said it, they’re the definition of ‘Fight On,’ To do what they did, to be where they were halfway through the season at the lowest of lows, and to win a Pac-12 South championship, and get us to a Holiday Bowl, that’s pretty special as a group.”

The practice itself lasted all of 45 minutes on Wednesday. It was a lighter, helmets-only session that featured plenty of walkthrough work, with a special emphasis on mock situations.

Helton said that he was not only impressed with the way that the players performed, but also the recently elevated assistant coaches – many of whom wore headsets during the practice.

“I tried to put them in hard situations, from down-and-distance situations to surprise injuries, so they didn’t know who was going to go down, to automatic special teams situations,” Helton said. “So, we tried to simulate every situation that you could have in a game, and from an overall standpoint it looked very fluid to me. I’m going to go back and watch the tape today, but it did not look like we missed a beat.”

Helton expects to have DC in place by mid-January

While Helton has maintained that he is not going to rush the process of hiring assistant coaches, and in particular, a defensive coordinator, on Wednesday he did give more of a specific timeline, citing January 14 as the point in time when he expects to have a new DC in place.

“I want to get the best possible people for our players and our university, and not just hire to hire a guy,” Helton said. “The beauty of it is we don’t step back into recruiting until January 14, so ultimately you’d love to be able to have a defensive coordinator at that point in time, to be able to sell for the next two-and-a-half weeks of recruiting – to show kids the system that their going to be in. And then I’m hoping by mid-January that we’re pretty complete as a staff. There may be one or two positions left, but he primary focus of the coordinator and some key positions will be done.”

– Cornerback Kevon Seymour did not participate in practice again due to what Helton said is a high ankle sprain. The Trojans head coach said he is 50-50 at best to play against Wisconsin in the Holiday Bowl.

– No new update was provided on offensive tackle Chad Wheeler, who has been absent from all of the bowl practices after having been involved in an altercation this past Saturday that reportedly resulted in him being held for evaluation. Helton said that he still has not spoken with Wheeler since the incident took place.

– Banner continued to run with the No. 1 offense at Wheeler’s normal left tackle spot, with freshman Chuma Edoga lining up at right tackle.

– Khaliel Rodgers, who wore Kessler’s yellow jersey No. 6, spent the entire day with the No. 1 offense at center.