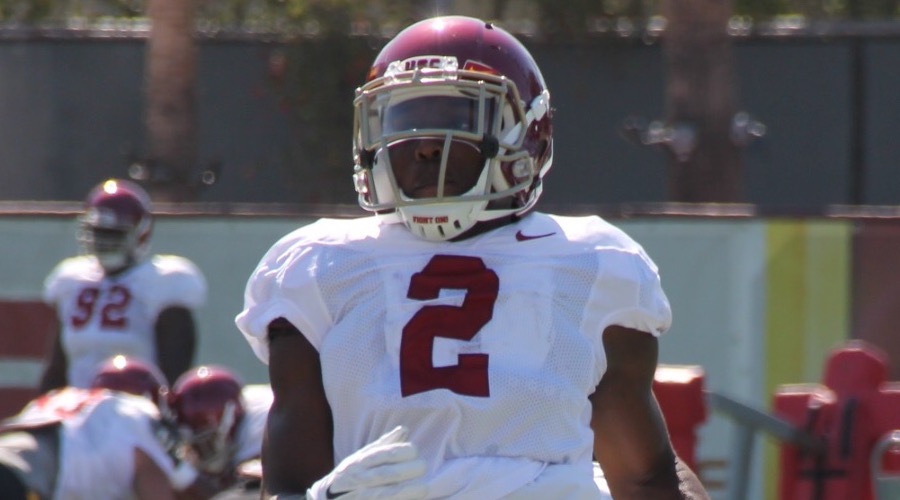 With it having rained earlier in the day, the Trojans’ bowl game practice session was moved inside Loker Track Stadium on Wednesday, where the team worked out in shorts, shoulder pads and helmets.

There were two primary points of emphasis during the two-hour session according to USC head coach Clay Helton. Offensively, the focus was on preparing for Penn State’s pass-rush. The Nittany Lions rank No. 11 in the FBS this season with 39 sacks, due in part to the variety of blitzes that they are known to utilize.

“It reminds me a lot of the Arizona State game, and the Utah game, with four-man pressures coming from both field, boundary, and up the gut – trying to confuse a quarterback with several zone coverages,” Helton said.

On defense, meanwhile, Clency Pendergast’s group spent plenty of time preparing for Penn State quarterback Trace McSorley, and in particular, his ability to scramble and to extend plays with his feet.

“We made that a big point of emphasis today, with some of our pressures about keeping him in the pocket, and don’t let him get out because he can be extremely dangerous with those big receivers once he gets out there,” Helton said.

So far this season McSorley has thrown for 3,360 yards and 25 touchdowns with just five interceptions, while also rushing for 362 yards and six touchdowns.

Adoree’ Jackson hears from a pair of former Trojan stars

Following practice junior star cornerback Adoree’ Jackson continued to maintain that he will not make a decision regarding a potential jump to the NFL until after the Rose Bowl.

With his full attention zeroed in on the big Jan. 2 matchup with Penn State, Jackson said that he had a chance to talk to Keyshawn Johnson about his own Rose Bowl experience on Tuesday. The former USC wide receiver helped lead the Trojans to a 41-32 victory over Northwestern in the 1996 version of the contest.

“I talked to Keyshawn Johnson yesterday. That was pretty cool,” Jackson said. “He said he went for 12 catches, [216] yards and a touchdown, so he was telling me what he did out there, and the stage of it all, and how to prepare and get ready for it.”

Jackson is coming off a fantastic showing against Notre Dame in which he scored three different ways – by kick return, punt return and off of a reception. The Gardena (Calif.) Serra product said that his phone was ringing off the hook following his performance. Included among those that he heard from was another former Trojans star.

“Everybody was calling my phone and texting my phone,” Jackson said. “I had something like 200 messages which was kind of weird. Everybody was tweeting me, which was cool…some famous people, so I was actually pretty happy. Reggie Bush tweeted me, so that was big for me.”

– With Rodgers sidelined, Chris Brown continued to take periodic reps with the No. 1 offense at center.

– Jalen Greene continued to see time at both quarterback and wide receiver.

– It was interesting to see Helton line up at his old quarterback spot during an early period where he worked with both service teams, running the offense through some specific running plays. He even ran a keeper on one play.

“We call that our ‘iron sharpens iron period,’ and I get the opportunity to run both scout teams,” Helton said. “Being up there late at night and watching both offense and defense, I get a feel for both sides of the ball, and being able to coach the guys on the exact our offense and defense need. Plus, it gives a great sense of urgency to our service members that they are extremely valuable – the look that they give us.”

– During an early 7-on-7 period Darreus Rogers made a beautiful one-handed grab for a gain of around 25 yards on a pass thrown by Sam Darnold.

– Marvell Tell III came up with the play of the day on defense during that same 7-on-7 period, picking off a Matt Fink pass outside intended for Daniel Imatorbhebhe and taking it back for six.

– Cameron Smith made the hit of the day, leveling receiver Trevon Sidney after he failed to haul in a quick pass over the middle from Matt Fink. The play sent the defensive players into a celebratory frenzy on the sideline.

– Jackson showed off his return skills during an early special teams period, taking a kickoff back for a score.

– Darnold hit JuJu Smith-Schuster outside for a gain of 11 or 12 yards.

– Darbold hit Greene over the middle for a gain of 10 yards.

– Fink tried to hit D. Imatorbhebhe outside, but Tell was there to intercept the pass.

– Fink tried to scramble for a gain, but Stevie Tu’ikolovatu stopped the play for no gain.

– Greene made a nice leaping 25-yard grab over the middle on a pass from Darnold.

– Darnold hit Smith-Schuster outside for a gain of around 20 yards.

– Darnold hit De’Quan Hampton over the middle for a gain of around 15 yards.

– Greene hit Cary Angeline outside for a gain of 7 or 8 yards.

– Greene ran outside for a gain of close to 10 yards.

– Greene tried to go deep to Tyler Vaughns, but Iman Marshall broke up the pass.

– Greene hit Sidney outside for 10 yards.

– Darnold hit Rogers outside for a gain of 15 yards.

– Darnold tried to hit Smith-Schuster, but Jalen Jones broke it up.

– Darnold hit D. Imatorbhebhe over the middle for a gain of around 10 yards.

– Fink hit Michael Pittman Jr. over the middle for a gain of 7 or 8 yards.

– Darnold hit Hampton outside for a gain of around 25 yards.

– Darnold hit Greene outside for a gain of 10 yards.

– Darnold tried to hit Smith-Schuster deep down the sideline, but Yoofi Quansah broke it up.

– Oluwole Betiku got around Zach Banner to sack Darnold.

– Darbold hit D. Imatorbhebhe outside for a gain of close to 10 yards.

– Greene tried to hit Tyler Vaughns outside, but Marshall broke up the